Did I mention that the cable for my bike computer/speedometer was broken when I pulled the bike out of the box in Crescent City? Since I also left my Garmin at home (one less thing to have to charge on the road), I was flying blind on speed and distance the whole trip, relying only on my maps and road signs. So the daily distances I’ve reported are my best guesses (which checks out to 40.1 miles and almost 4000 feet of climbing, not bad!).

The Adventure Cycling route hops over to Fairfax and goes to San Francisco through mostly Marin County suburban residential streets. Apparently it’s not a bad route, but there’s better routes which maximize the scenery and minimize the suburban riding if you’re willing to do some climbing. So per Amanda’s suggestion, I headed off-route out of Olema on Highway 1 south. 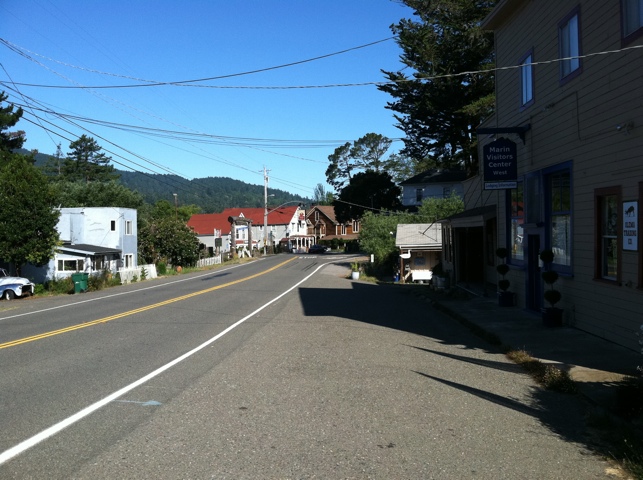 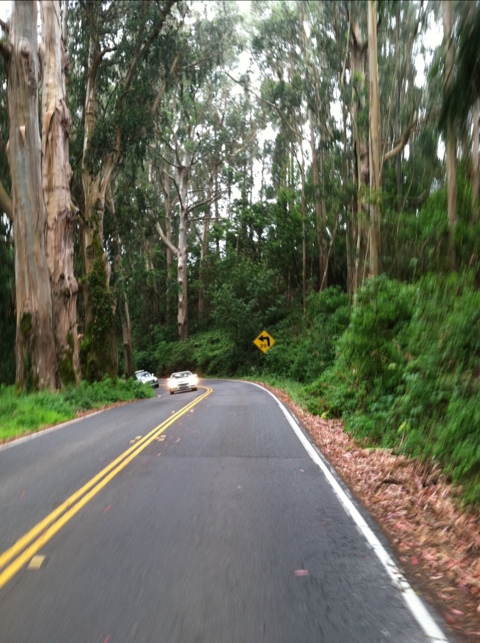 Finally Highway 1 gets back to the water, at the road that splits off to Bolinas. 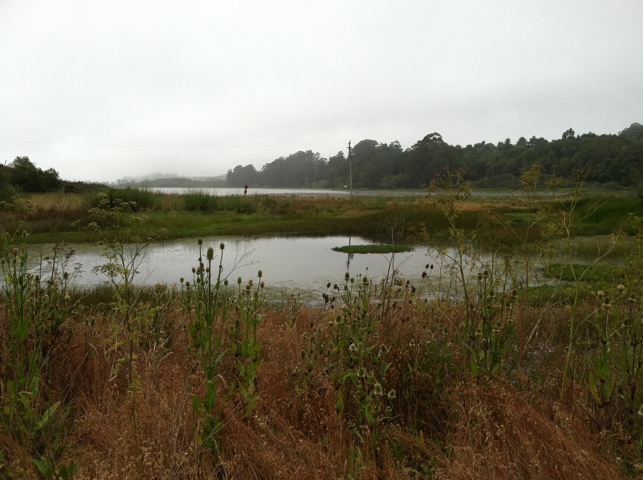 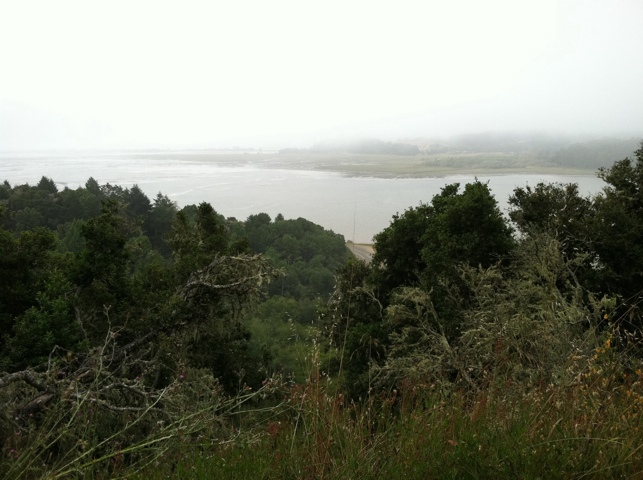 Rather than take the “Basic Instinct” route down Highway 1 towards Stinson Beach and beyond, which would likely have a lot of beach traffic coming from the city, I took the unmarked turnoff onto Fairfax-Bolinas Road on the left. 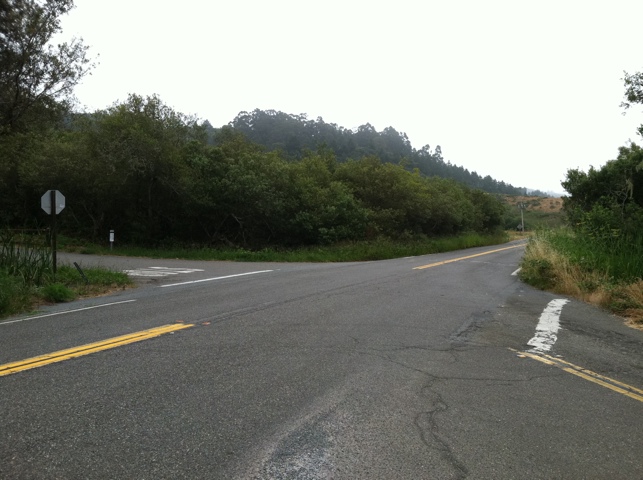 There was a huge amount of climbing – I was in my lowest gear the whole time – though at least I didn’t have to go the whole 14 hilly miles on this road!  Only three cars on this road and just as many cyclists. 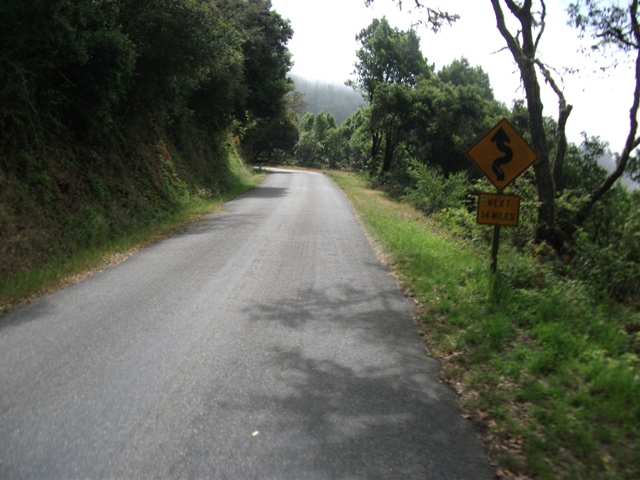 Then at 1500 feet, I turned onto Ridgecrest Blvd, which topped out at about 2100 feet. Yes, I was still in my lowest gear most of the time, but it was worth it. 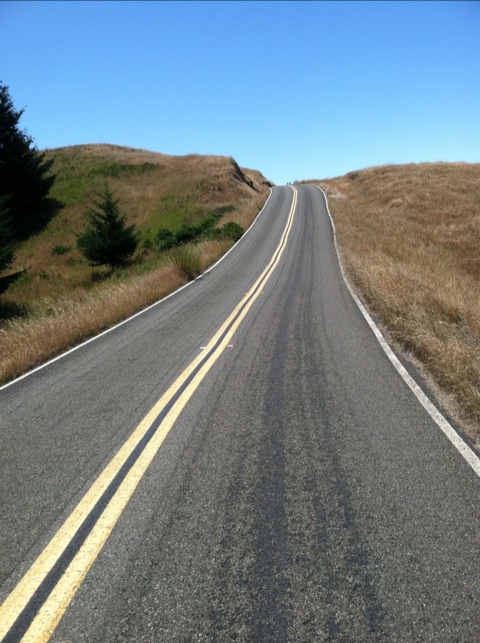 Although there was fog over the ocean, I could clearly see looking down from Ridgecrest that it would be a great beach day. 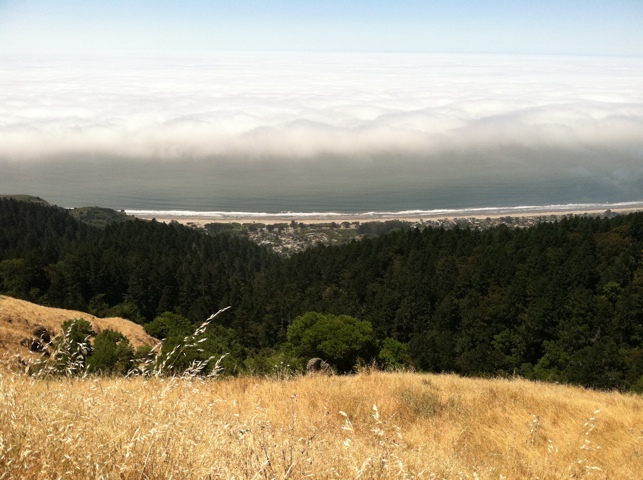 Amanda gave some suggestions for continuing the (paved) climb up to Mount Tamalpais and some interesting ways down. Although it’s a great view from the top, I didn’t really have the legs for that and instead went the more direct way down Pantoll and Panoramic to rejoin Highway 1 southbound.  I didn’t get any photos because I didn’t want to stop on any of the downhills.  Hopefully my helmet camera video turned out OK.

Traffic was heavy in both directions on the narrow Highway 1, but it was all downhill to Mill Valley and I was going the speed of traffic so it was a non-issue.  At the bottom I saw a Subway on the left and decided to stop there for lunch, rather than dealing with having to be more careful about securing the bike the closer I got to the city.

Highway 1 ends at US101. A short bike path connects from there over to Sausalito. I bumped into a cyclist traveling the other way and asked her how to get through Sausalito to the Golden Gate Bridge. And then she had a question for me about how to get to Mount Tam! Perfect!

Finally, the Golden Gate Bridge was coming into view. 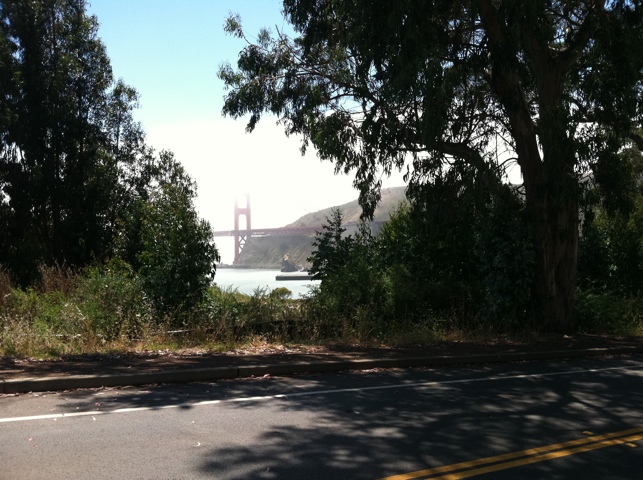 I followed a signed route which directed me under the bridge and up some switchbacks to the west side of the bridge, which is the normal “bike side” of the bridge. I knew the west side was closed for construction, but that would lead me to an undercrossing to the east side. But then there were these stairs! At least I could (barely) push the bike up them. (I later found out that there was another way to approach the east side without having to navigate the stairs.) 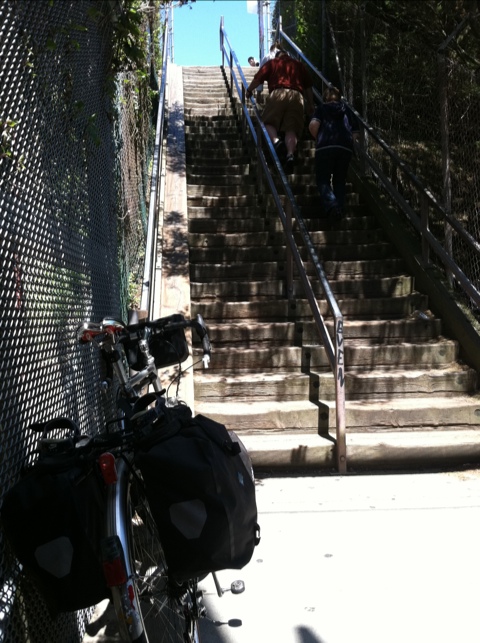 In all honestly, riding across the bridge was the real lowlight of the trip. I had already done it before, but this time it was really crowded, there was a heavy crosswind from the ocean, and you really couldn’t see much of the city with the fog. The following photo doesn’t do it justice, this was much further down the bridge when it was actually somewhat safe enough to pull out the camera to snap a photo. 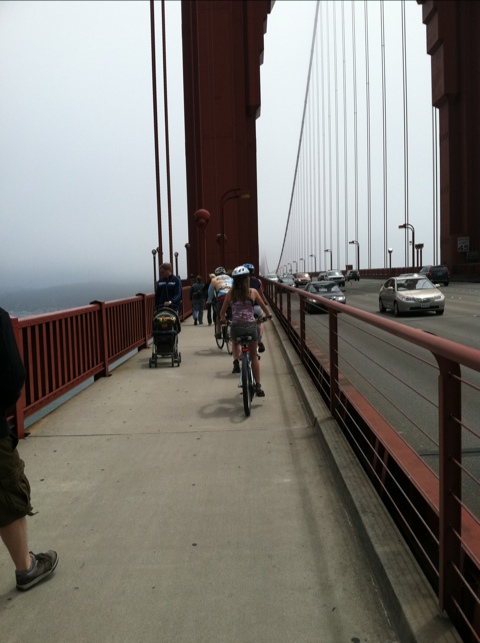 I didn’t spend much time in the city, because I needed to head downtown to pick up my rental car and go meet a friend in San Jose for dinner. The rental car place is just down the street from here. I went around to avoid the hill. 🙂 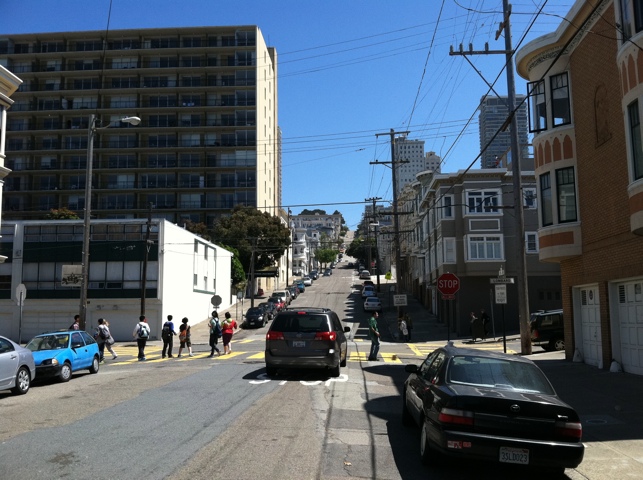 Overall, this was a great bike trip, and I enjoyed riding the section of California coast north of San Francisco. Traffic was also non-existent very far north up by Crescent City, even on the July 4th weekend. Other folks told me the route was busy between Fort Bragg and Mendocino during that holiday weekend, but I had passed through there mid-week and although the traffic there was the heaviest of the trip, it wasn’t too bad.

Another point which should be noted is that much of the route has no paved shoulders. I don’t consider that to be an issue here given the light traffic volumes on this route. Furthermore, the motorists were accustomed to seeing cyclists, as this is a popular cycling route, and so they crossed the yellow line if necessary to give enough safe passing clearance. During the times there was a blind corner or opposite direction traffic, overtaking traffic slowed down to wait until it was safe to pass.  Motorists didn’t seem to be in as much of a hurry as they tend to be in more populated areas.

My “normal” way of touring these days is to pack really light and stay at inexpensive motels. But except for a few places such as Fort Bragg and Crescent City, that seems pretty hard to do, as in many places along the coast the only lodging choices are bed and breakfast hotels, which would be cost-prohibitive for many cyclists wanting to enjoy touring the coast at a leisurely page.

So I’m glad I brought the camping gear, because I could take advantage of the $5 fee when there’s a designated hiker/biker site at state park campgrounds. No reservations are needed for the hiker/biker sites, you can roll in at the end of the day and have a spot to pitch your tent, even if the “regular” campground spots are all fully booked. In addition, the sites are plentiful along the route, they have hot showers, and they are a great way to meet other cyclists touring the coast. Several of these state parks are subject to closure this fall due to state budget cuts. Hopefully some funding is found at the last minute to keep them open, otherwise it would make this section of coast inaccessible to the average touring cyclist.

[Edit 1/25/13: I found someone else’s route from Cresent City to San Francisco which almost matches mine, except for my last day’s route which I already posted above.]