On Saturday 10/27, my internet connection started dropping intermittently. My internet provider DSL Extreme said there was no problem with the line. I replaced the modem, router, and even ran new ethernet cables – no luck. The only fix was to take the router, which was 40 feet away from the modem, move it 6 feet away from the modem, and connect it with a shorter cable. That seemed like an unusual fix, so I checked with DSL Extreme to see if they changed anything on their end. As I expected, the cable length tends to be only an issue for the phone line to the modem, not the modem to the router (well, at least at the lengths I’m talking about). So needless to say, I was a bit puzzled, but left my router there and hoped for the best as I left town on business.

When I came back from my business trip at the end of the week, my wife pointed out that she hadn’t received very many political phone calls, despite it being so close to election day. So now I knew there was something wrong with the phone line. Upon closer inspection, we were intermittently losing the dial tone. I took an old school phone and plugged in the jack at the service entrance to confirm the problem wasn’t with my wiring. So on Saturday 11/3 I called AT&T, and they sent a technician. He said there was a short in the outside wiring and had the cover off of the pole in my front yard to replace the wire. I wasn’t surprised – the pole which used to stand solid 15 years ago when we bought the house has now rusted at the bottom and flops around like a wet noodle. Looks like AT&T has neglected their POTS infrastructure. 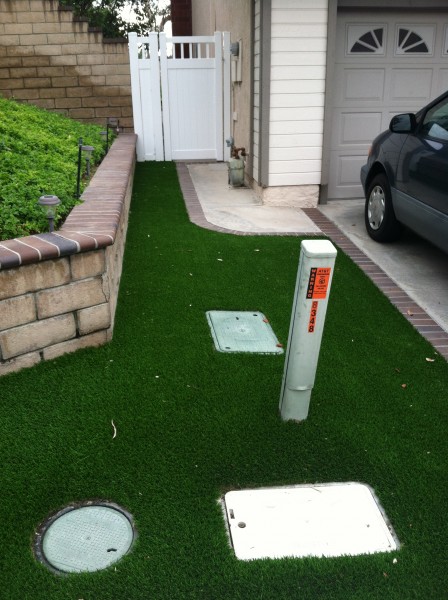 After this incident, I decided that sticking with an AT&T landline and DSL with a maximum speed of 6.0 Mbps (and normally really only 4.0-4.5 Mbps) wasn’t the way to go for the long term. Fiberoptic service is not available in my area, so cable is the only way to go. (Though strangely enough, a friend in the next tract over was able to get AT&T UVerse, although her experience hasn’t been good, and she is going back to cable.) Luckily there is some competition in that area, as our part of town is serviced by both Time Warner and Cox cable. On Tuesday 11/6 I ordered Cox cable internet. The plan was to cancel the DSL after cable internet was up and running, then port my landline over to the unused port on my VOIP adapter which I use for my work phone line. (I get TV from an antenna, so that doesn’t enter into the equation.) A friend suggested looking into internet/phone/TV bundles, but surprisingly that doesn’t offer any significantly discounted pricing.

Then we got the first rain of the season the morning of Thursday 11/8. And that washed out my landline and DSL, a major hit for someone like myself who works from a home-based office. Rather than call AT&T and have them play “whack a mole” with their infrastructure problems, I visited the Cox store to check on my order status, and they let me know my internet would be activated on Friday. Actually, late Thursday afternoon, I got the new cable modem in the mail from Newegg (self install) and got the activation email from Cox, so I called them that night. The registered the modem in their system, but the connection didn’t go “live”. They said a technician would could out on Friday in order to make the outside wiring connections.

Friday came and went, with no technician and no cable internet. I called Cox technical support that night, and they said the technician visit was rescheduled for Sunday, but with no explanation why. It would have been nice to let me know!

But at least things had dried out by Saturday, with the DSL is now “working” at a usable, albeit slow, speed. That would at least hold me over until the cable internet would be working on Sunday. 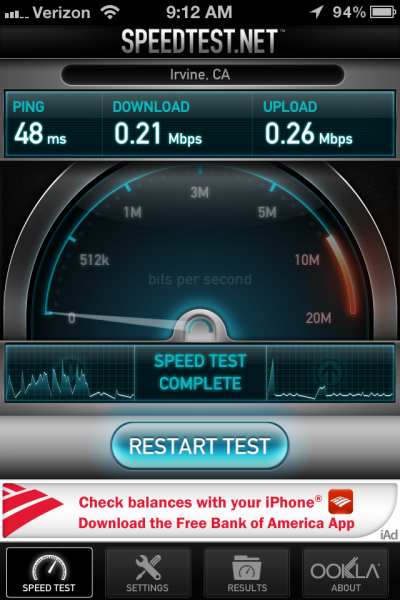 Just to play it safe, I called AT&T on Saturday, and they said they could send a technician out on Monday. The AT&T technician arrived a day early on Sunday and fixed the DSL (again). Apparently they were in the area anyway due to other residents having problems. Good thing I got the DSL working again, since the Cox cable internet still wasn’t working even by the end of the day Sunday.

On Monday morning I called Cox to see what was going on. They said someone had come on Sunday to make the outside connection. Sure enough, there was a “fresh” connection in the green underground box outside (behind the pole in the photo above), I must have missed them when they were here. But when technical support asked me to connect the modem to the router and open a browser, I got a Time Warner cable activation screen, not a Cox one! On each call I had been trying to tell the technical support people that my neighborhood is wired for BOTH Time Warner AND Cox cable, but it’s been falling on deaf ears – until now. Though it was only now that I recalled the specific issue from when I had Cox cable about 15 years ago: the green box in front of my house is for the Time Warner connection to me and my neighbor. The green box in front of the neighbor’s house is the one with the Cox connections for the two of us. History repeated itself, with the Cox technician incorrectly connecting me to Time Warner. Unfortunately I would have to wait until Thursday for them to come out and fix it.

The Cox technician came on Thursday and fixed things pretty quick. So now I’m getting superfast speeds, even on the upload side! Cox Preferred has 22 Mbps and 2.5 Mbps upload with “PowerBoost”, but I’m doing better than that. 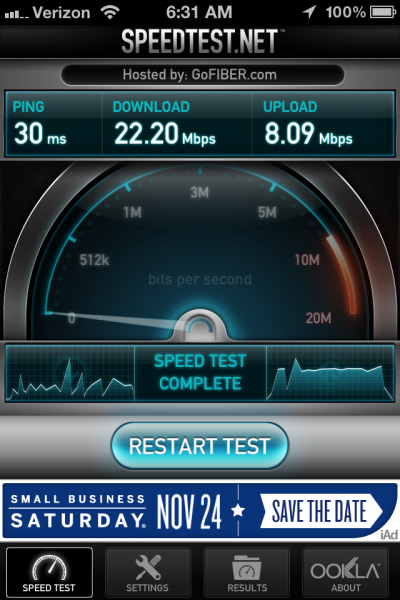 I called Cox billing, and they will credit me for a week without service. They also didn’t charge me the normal $30 self-activation fee (which is a bit of a joke because for that money, all they do is FedEx you some coax and splitters/connectors).

Now all that remains is to wait for the AT&T landline number to port over to my PhonePower VoIP service. Then I can finally get rid of AT&T, and hopefully their annoying phone calls asking me to upgrade to their latest “deal” will go away! Even with the $54 a month for Cox Preferred Internet after the six month promotion is over, it’s still cheaper than AT&T landline plus DSL.

At least as part of this process I did some “urban renewal” to clean up the wiring inside my house.

I used to have a gigabit switch in the attic (old photo here), to the left of the (non-gigabit) switch hanging upside down in the top center of the photo. The heat didn’t make the attic the best place for these switches, but I left them there until I had a good excuse to move them. But with the internet connection problems, I had to remove the gigabit switch to rule it out as a source of the problem. Now I have couplers taking the new blue Cat 6 cables and extending them down inside the wall to the conditioned space below.

The remaining switch is for the old gray Cat 5 cables. I left it in place, as it is hardly used anymore, since WiFi nowadays is faster than the old 10/100 switch. 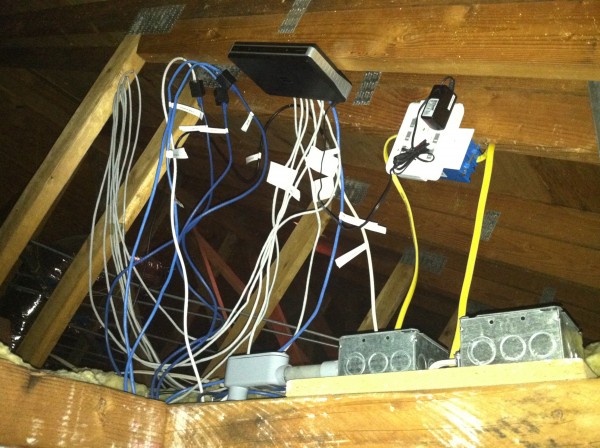 The blue Cat 6 cables now terminate into a new wall plate in the left top of the photo. Cables from that wall plate run to a new Western Digital gigabit switch, which is under the light blue TrendNet print server. By the way, from left to right, top to bottom: router, print server, switch, POE power injector for my outdoor WiFi access point, NAS, ink cartridges, and printer. 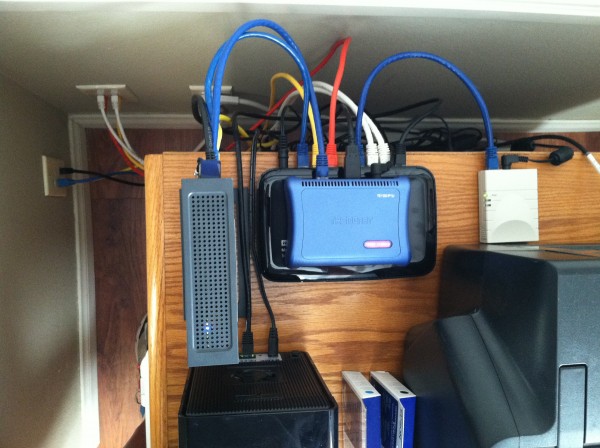 The cables look a bit messy in the photo above, but the setup looks pretty clean when looking from the front. 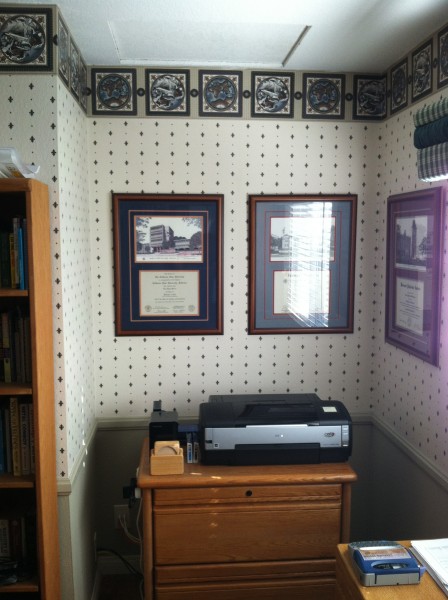 I even cleaned things up on the garage wall behind where the cable and phone lines enter and are distributed to the house. From left to right: surface mount jack, DSL modem, UPS, surface mount jacks, VOIP adapter, cable modem. 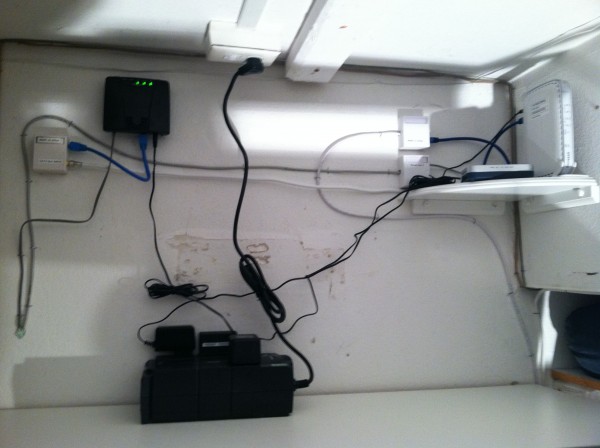