I’m at a crossroads with my internet connection at the mountain cabin, in a small town with a population of 5,000. A long time ago, I got the most basic DSL connection, 1.0 Mbps, good enough for remote access to the thermostat and the webcams. That was long before streaming movies and working from home, so now it is too slow. But Verizon has run out of capacity in town, and no new connections or speed upgrades are available. 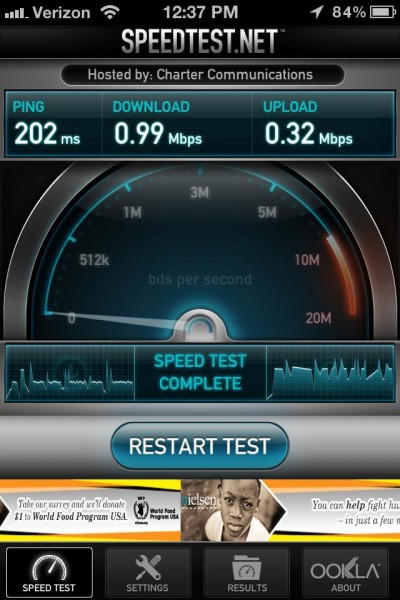 At this time, there are no other feasible alternatives for a faster, always on connection. Cable isn’t an option – heck, it’s barely even an option for television up here. Satellite internet is available, but the latency is a deal killer for remote desktop access for work, and I’m not too happy about the bandwidth caps either.

Even cellular data, even though there’s currently only 3G in town, doesn’t look so bad compared to 1.0 Mbps. My Verizon iPhone 5 – even only at 3G speeds – gets about 1.5-3.0 Mbps. When I had AT&T, I’d get around 5.0 Mbps up here. (I never saw anywhere near that in LA/OC due to network congestion.) But the main issue with cellular, besides the data caps, is that you don’t get an external IP address. So no webcams or the ability to turn on my thermostat to warm up the cabin before I arrive.

That got me thinking – was there a router which would let me have an always on DSL connection, but let me use a connection from a mobile hotspot or a USB modem when I’m in town for the weekend? Surprisingly, yes – the Cradlepoint MBR95 router. It can take a connection via the WAN port (from a fixed modem), “Wifi as WAN”, or a USB modem plugged into the router’s USB port. So I picked up an MBR95 to give it a try.

Here was my network configuration before installing the MBR95.

Normally you’d only get one external IP address, so you couldn’t set up the two routers in parallel like that with a bridged modem. But the nice thing about my ISP (not Verizon, though they are using Verizon’s infrastructure) is that they give up to 5 dynamic IP addresses. Hence the two routers connected to the bridged modem via a switch, allowing the routers to have separate IP addresses and avoiding issues with double NAT if I had one router behind the other.

The Buffalo router is high up in a closet and and upgraded with an external antenna for maximum wireless coverage at the cabin, as described in this previous post. The Netgear router serves mainly the webcams and the thermostat. So it sits in the crawl space to be safely kept away from renters, as well as to provide a cooler home for it during the summer. (No crawl space humidity issues in the Southern California mountains.) This is a “file photo” from when I had a Linksys router instead of a Netgear, but you get the idea. 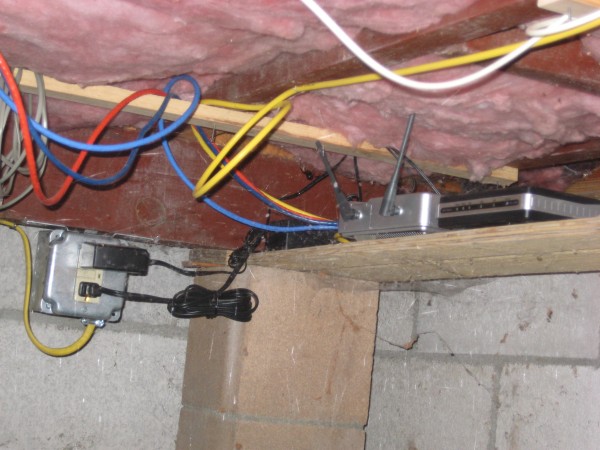 Here is the new configuration, after I added the MBR95 to the system. (Changes are in italics.)

The MBR95 is in the crawl space, and so the Buffalo is set up as a wireless access point to share the MBR95’s internet connection (whether it be the DSL, mobile hotspot, or USB modem) with separate private and guest networks. While the DD-WRT operating system on the Buffalo router is very powerful, it was a real pain to set it up to work the way I wanted it to behind the MBR95. I was going to write up a whole section about how I did it, but I didn’t save any of the links. Suffice to say it was a real bear, though. (Note that most people won’t need to have another router behind the MBR95. I only did it that way because the range of the MBR95 is terrible down low in the crawl space. So the Buffalo router is high up in a closet with an upgraded antenna to give better coverage on my property.)

I could have also moved the thermostat and webcams over to the MBR95 (while keeping a separate wireless network for the webcams) and eliminated the Netgear. If I’m ever in a situation (such as changing DSL providers) where I can only get one external IP address, I’ll do that. But I already had the Netgear router and the multiple IP addresses, so I left it as-is.

I originally wasn’t planning on going through the trouble of wiring up the USB connection. But then I realized I had a blank wall plate on the wall above the portion of the crawl space containing the routers. (That blank wall plate was the former home of a three way switch for outdoor lights, which I had since removed to relocated it to a more “proper” location.)

So in went the USB keystone wall plate! A 10 foot USB A Male to A Male cable connects this to the USB port on the router. Now a USB 3G/4G modem could be plugged in here, rather than having to crawl under the house to do it. 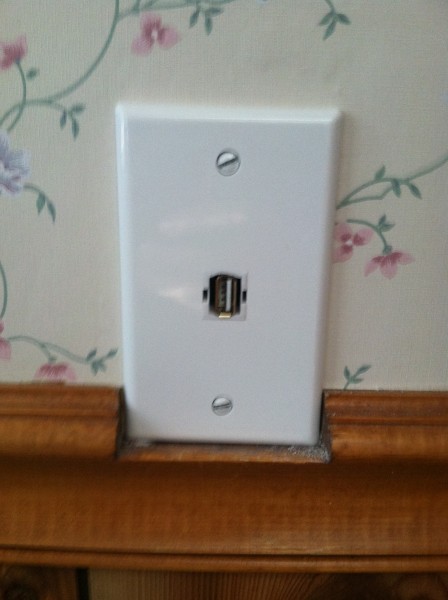 One question I should have answered earlier: if I’m going through all this trouble to share a mobile hotspot connection through my cabin Wifi, then why don’t I just have my computer connected directly to the mobile hotspot instead? Well, I have a wireless printer connected to my cabin Wifi, so I would lose connectivity to it. And I wouldn’t be able to take advantage of the faster hotspot speeds when watching Netflix on my Blu-Ray player.

With the way things are looking regarding internet connectivity in town, my bet is that we will have 4G LTE wireless service in town long before the promised DSL upgrades go through. If I’m right, then the money for the MBR95 has been well spent. The major downside of 4G LTE compared to DSL is the data caps, but I am generally in town only on the weekends, so that is not a major issue for me.

Well, I was right. 4G LTE came to town before the DSL upgrades! 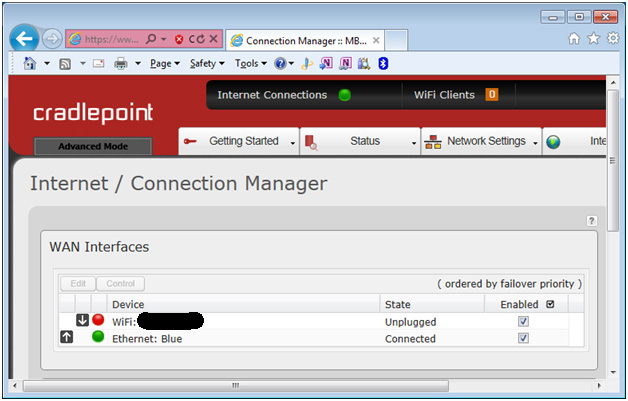 Here is the corresponding speed test. I’m not even getting the 1.0 Mbps that I’m paying for. 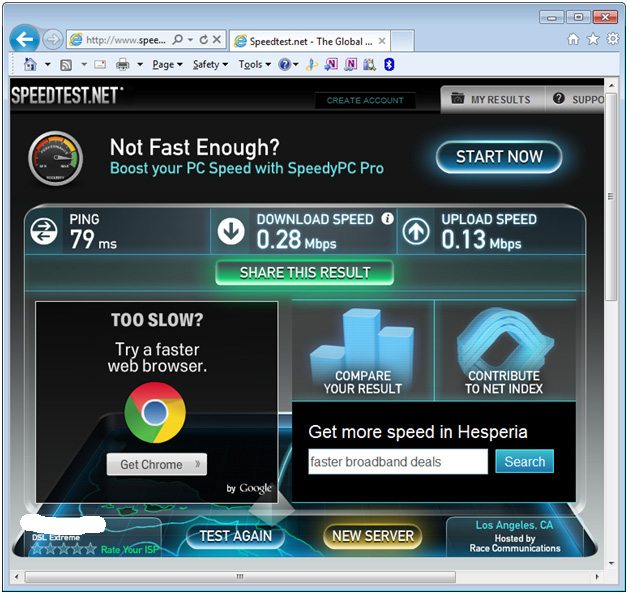 Then I turned on the wireless hotspot feature on my phone. I forgot to get a screen shot from the router afterwards. But just picture a green light next to the Wifi line and the state “connected” instead of “unplugged”. More importantly, here is the speed test, much better than the previous one! 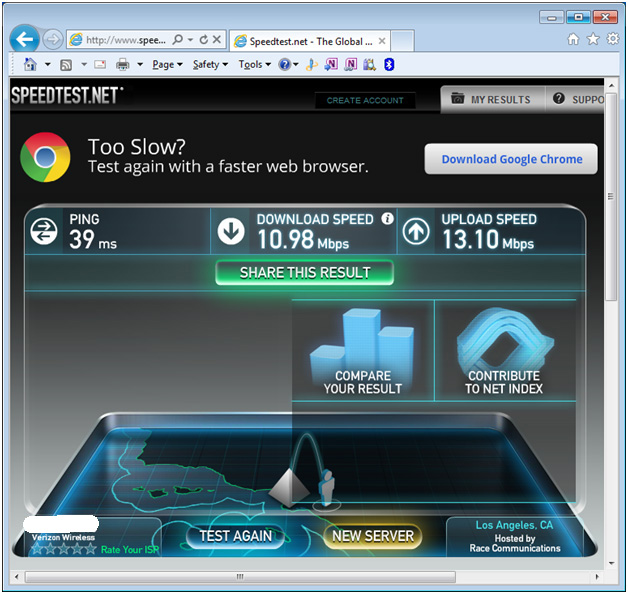 On another note, the native wireless hotspot feature on the iPhone 5 didn’t reliably and consistently connect to the MBR95. Often it would say “connecting” and then fail to connect. That remained true even after following some advice to delete the BSSID in the wifi configuration. But using the jailbreak wifi tethering app MyWi instead worked flawlessly, connecting successfully every time!

And yet another note: here’s how to enable automatic restarts on the MBR95, as it’s not directly accessible from the router configuration pages.