I’ve posted many times here on this blog about my latest gizmos at my cabin in the Southern California mountains, but it’s been piecemeal and I’ve never summarized everything in one place. Hence, this post.

Below is a photo of my “network closet” in the crawl space. I use the crawl space because it says relatively cool in the summer, which is best for the electronics. The inside of the cabin, as well as the attic, can get pretty hot in the summer when it’s all boxed up in our absence. In most places, condensation on the equipment would be an issue, but here the outdoor and crawl space humidity is very low year round. The crawl space location also kept everything away from the renters, back when we were using this as a vacation rental. Yet despite the apparent tight quarters in the photo, it’s still easy access, as the access opening is immediately to the right, just outside the frame of the photo. 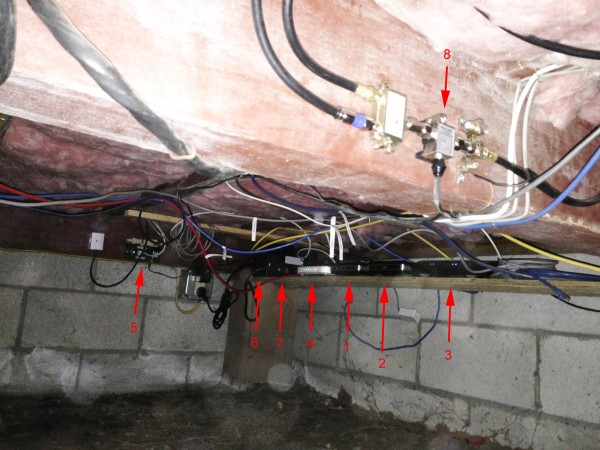 So here’s a list of everything (excluding “normal” stuff such as the flat screen TVs), along with links to my previous webpages:

I’ll have to write about the ham radio equipment some other time.

And here are the things which fell through the cracks and didn’t have their own webpage – until now:

In order to be able to turn on the heat remotely and have our place be warm upon our arrival, we picked up the (now discontinued) Proliphix NT20e IP thermostat. It was one of the few internet controllable thermostats available when we bought our new (to us) cabin five years ago, since the now popular and inexpensive Wifi thermostats had not come out yet. (And, as a side note, at our old cabin, we were using a phone controller to turn the heat on and off by telephone!) However, I like this thermostat better than the newer ones, because the ability to set up “special days” to turn on the heat works better for my situation, rather than just turning on and off the heat based on a regular schedule. 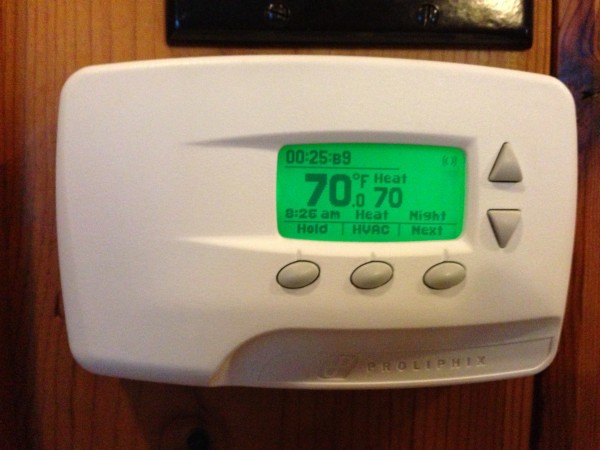 Our cabin heater is an old floor furnace, but it works just fine, though on cold winter days it will take a loooong time to heat the place up from the unoccupied temperature of 45°F to the occupied temperature of 70°F. The nice thing about the floor furnace is that it doesn’t need electric power to operate. So with the thermostat PoE adapter (number 5 in the first photo) plugged into the UPS, I still have heat in a power outage! 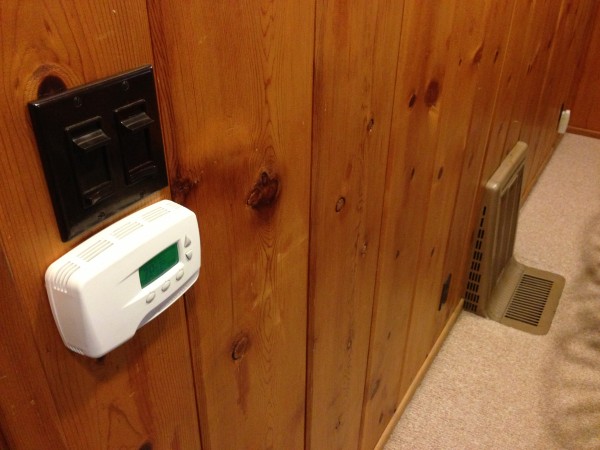 In addition, I have two remote temperature sensors which provide information only, they do not control the thermostat. The one in the photo below is in the crawl space, so I can know if the pipes are in danger of freezing. The other one is outdoors, under the front deck. 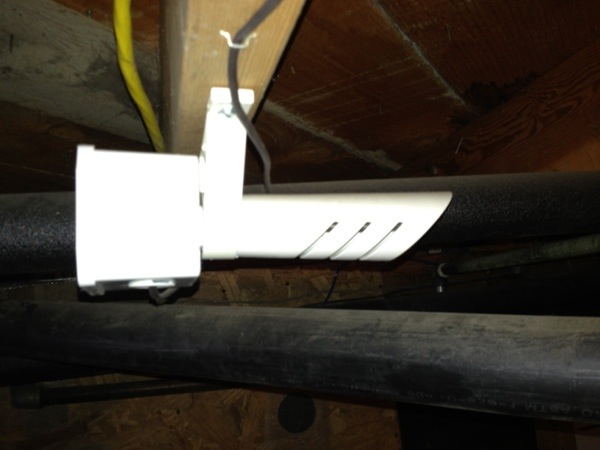 When I started working from home a little over a year ago, I got a dedicated business line through a VoIP provider. Later, after having problems with DSL and my AT&T landline at home, I ditched DSL for cable internet and ported my landline number over to my VoIP provider. So I bought a second VoIP adapter on Ebay and set it up with SIP credentials. Now both my home and business numbers ring simultaneously at both my home and my cabin! 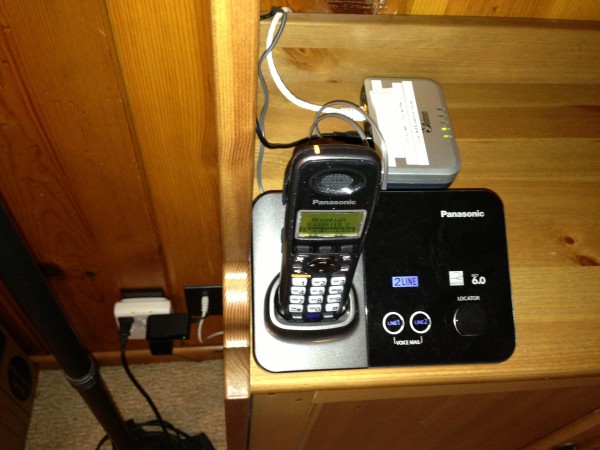 Finally, this is the keyless entry Powerbolt 1000 door lock. We used it to avoid passing keys back and forth when our cabin was a vacation rental, but now we’ve disabled it and just use the keyed portion. 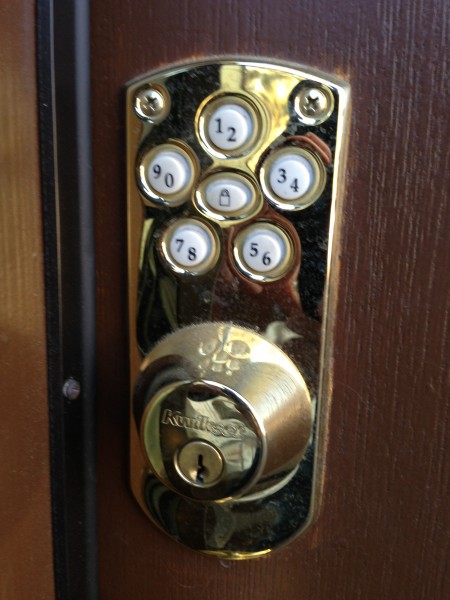 Edit: I added some photos of some other gizmos.

That’s the red thing stuck to the back of the satellite dish, which keeps it warm enough for falling snow to slide off it, rather than sticking to it. It’s an Ice Zapper 2, which is the “always on” version for warmer climates, rather than the thermostat controlled version for colder climates. I leave it on all winter, and in the spring time, I turn it off for the season with a switch wired inside the house. 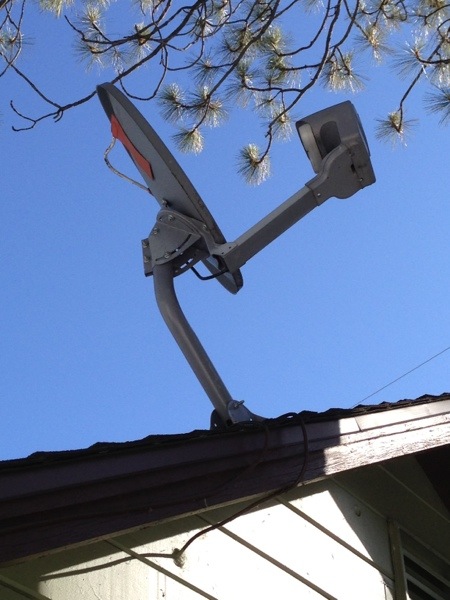 Our pipes run in the crawl space of the cabin, so there is always a concern about them freezing. Most of them run close to the floor and therefore get some warmth from the house, but the greatest area of concern is where the cold water supply pops out of the ground. I originally had a Frost King electric heat cable to keep that part of the plumbing warm, but I never found it to be reliable. So I upgraded to the Frostex self-regulating heat trace cable. Unlike the Frost King tape which (supposedly) turns on with a thermostat, the Frostex is “always on” but with more heat input at lower temperatures and less heat input at higher temperatures. We had a recent cold spell with single digit (F) temperatures  and even with the cabin interior at 45°F, no pipes froze. The electric outlet is connected to a switch inside the house, so in the spring I turn it off for the season, just like the dish warmer. Note the access panel to reach the shutoff valve from the outside without having to get inside the crawl space. 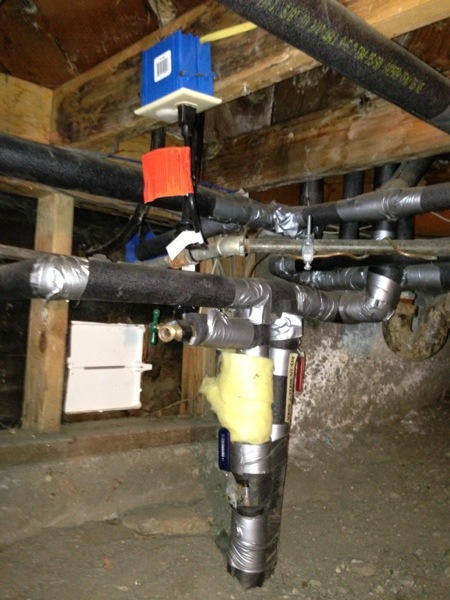 Here’s a photo taken from the outside looking in through the shutoff valve access door. Note the heating unit in the top right of the photo, as well as the Frostex cable coming out of the bottom and wrapping around the pipes. 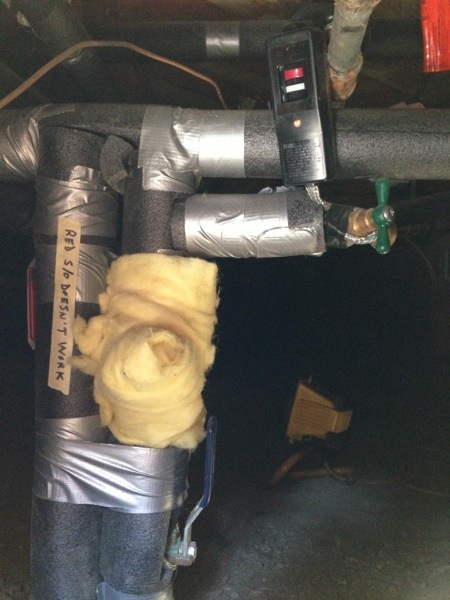 Here are the switches for the heat tape and the dish warmer. 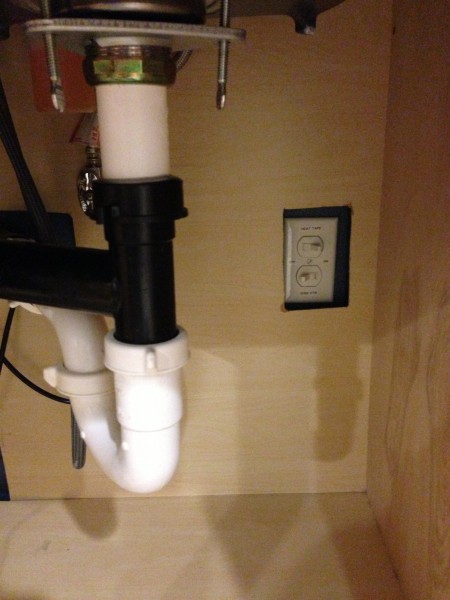 So why do I have an electric receptacle (circled in red) in the driveway? 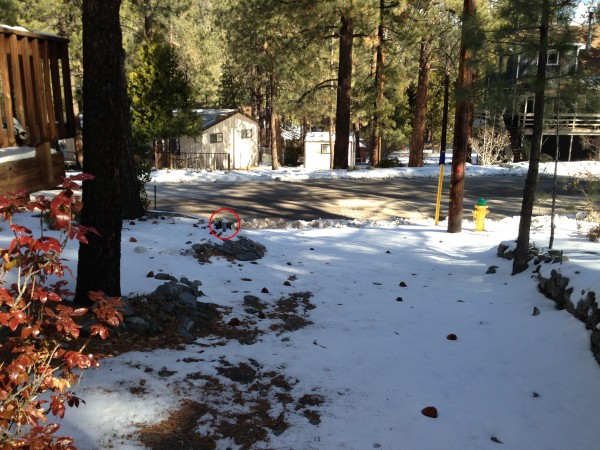 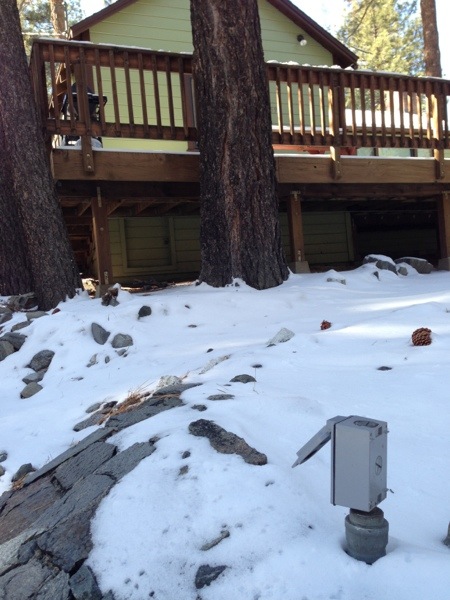 Actually, a receptacle wasn’t there when we first bought the cabin. There was a keyed light switch, similar to the kind that you’d see in elementary schools. It was a three way switch, wired with another switch in the house to turn on/off the outside lighting. I imagine that back in the day, when the previous owners came up on a Friday night to the spend the weekend in town, they would turn on the outside lights from this switch in order to be able to find their way to the front door. Now the need for such a setup is moot, since I have motion sensor lights as well as lights on a timer. Not wanting a good outdoor wiring run to go to waste, I threw away the old switch and rewired it up as a receptacle. (Yes, it is protected with a GFCI.)