I recently picked up an Acer Aspire D270 netbook. It’s a bit slow with running Windows 7 and only 1GB of RAM. But it’s cheap, thin, and light, which are perfect qualities for using this on my upcoming bicycle tour.

I decided to upgrade to 2GB of RAM and replace the hard drive with a solid state drive (SSD). That would help speed up the computer and make it more durable for the bicycle tour. Both are reasonably priced upgrades nowadays.

With most netbooks, it’s rather simple to access the RAM and the hard drive, just a few screws to remove on the bottom. But not this netbook, I’ll share a couple of photos, though I’ll spare the exact details since there’s lots of sites and how to videos. First the keyboard has to be pried off. That was the major annoyance, the only thing I could find thin enough yet strong enough to fit in between was a steak knife. 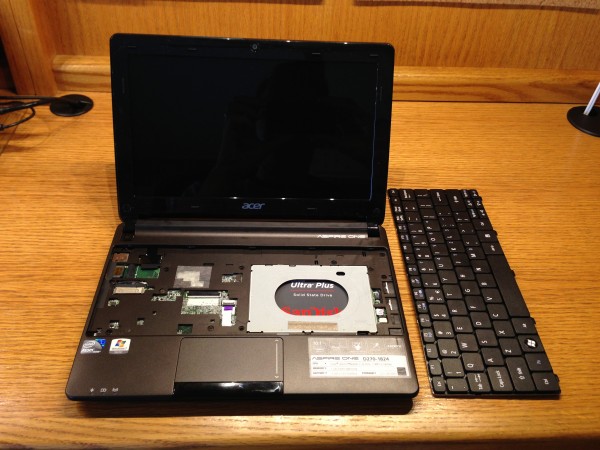 Removing the keyboard revealed a set of five screws labelled “door”. Those had to be removed, then I had to stick a screwdriver in the “door release”. That then partially popped off the back panel, which I could then get my fingers underneath and unsnap the rest of it off to finally access the RAM and hard drive. Obviously not designed to be user serviceable. 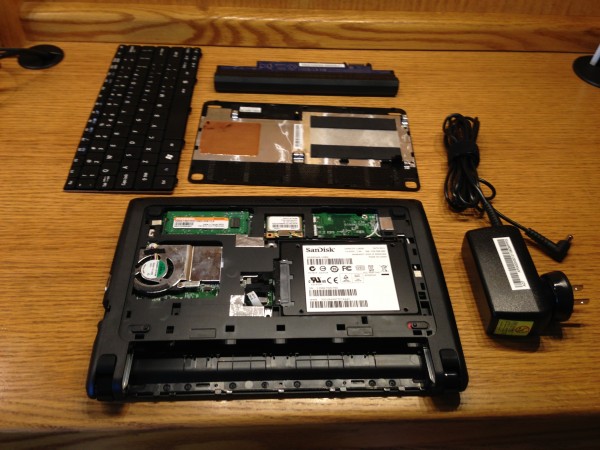 Reassembly was the reverse, carefully snapping the plastic bottom panel back on as to not break any tabs, putting the five door screws back on, then reattaching the keyboard.

The other main challenge was the Windows 7 install on the SSD. I do have a set of recovery discs, but I didn’t want to have to start over. So that left the challenge of moving from the 320GB hard drive to the 128GB SSD. There’s a few ways to do this, but I ran into roadblocks on a few of them. Eventually, the route I took was to use GParted to shrink the C: partition, use the recovery discs to do a clean Windows 7 install on the SSD, and then use Clonezilla to copy the C: partition from the old hard drive to the SSD. Afterwards, I had an issue with booting, but I was able to download this recovery disc to fix the bootloader.

So the new SSD was working fine – except for the frequent system lockups. I tried replacing the RAM, upgrading the SSD firmware, updating the system BIOS, making sure I had the latest AHCI drivers, etc., but no luck. By process of elimination, it must have been a bad SSD. So I sent the SSD back to Newegg for a replacement. And now I am waiting.

In some discussions with friends, I pointed out that another blogger successfully upgraded his D270 with a Samsung 840 SSD. They confirmed that the Samsung 840 is a solid drive, and I speculated that there might not have been anything wrong with the Sandisk SSD, but perhaps the low end hardware for the D270 might not have played well with it. So last night I went to Fry’s Electronics and picked up a Samsung 840 Pro SSD. (I’ll find another use for the Sandisk that is coming in the mail soon…) This drive didn’t come with a spacer, so I tried using the pads that stick to the bottom of chair legs to the fill the extra space. 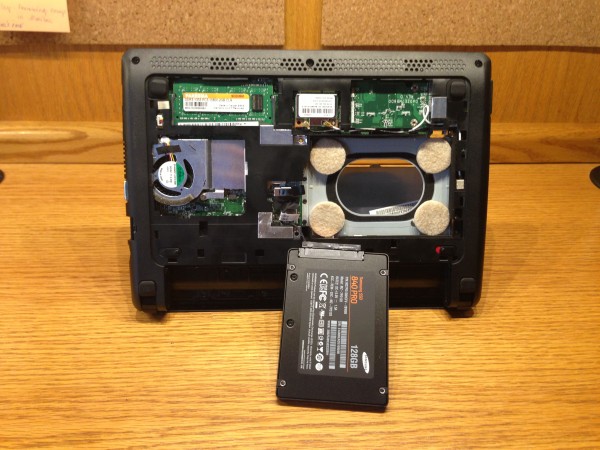 But the pads were a little too thick, and so I broke one of the tabs on the bottom of the back panel while reassembling the D270. I removed the pads. Turns out the extra space in the drive compartment isn’t a big deal, as it fits in there rather snugly. 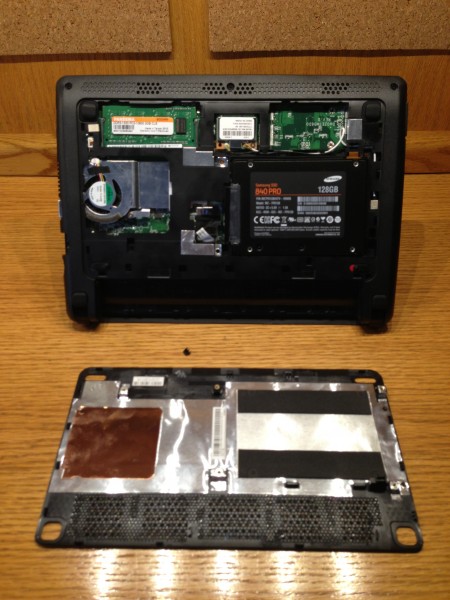 Then I followed the same procedure as outlined earlier to migrate Windows 7 to the SSD, and it was up and running in no time, no freeze-ups or any other issues. Though in my discussions with friends, I noted that the irony of dropping a $150 SSD into a $200 turd of a netbook wasn’t lost on me. But the combination of RAM upgrade to 2GB (the maximum for Windows 7 Starter) and the replacement of the hard drive with the SSD made this netbook fast enough to be usable. I guess you can polish a turd after all!