As I mentioned in my previous post, for the new cabin thermostat, I finally settled on the same thermostat I have at home, the Radio Thermostat CT-30, with a list price of about $140. (Actually, I have the rebranded 3M Filtrete 3M-50, which is the same thing, but for $100 – though I picked it up on sale for $80.) Installation was quite simple, the two wires from the millivolt floor furnace went to the RH and W terminals, while the two wires from the 24 VAC transformer (sold separately, and needed when using wifi) went to the RH and C terminals. The previous owners of the cabin even had some leftover wood stain which I was able to use, so you can’t see the bare wood where the old thermostat used to be! 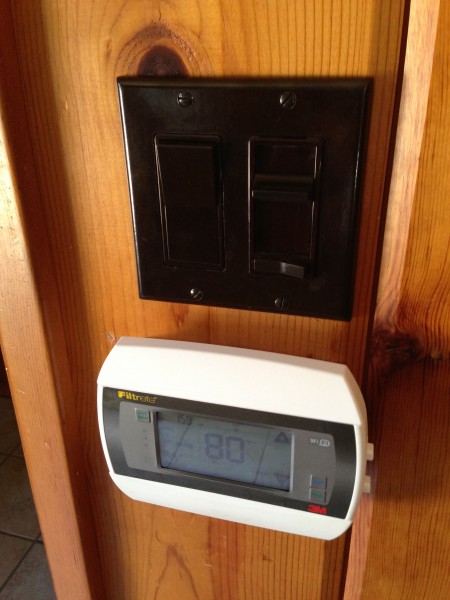 At first I was lukewarm on getting this thermostat for the cabin, since the one I have from home is a bit annoying to control from the touchscreen. Though in time I’ve learned to not bother with the touchscreen and use the much more user-friendly iPhone app. (It does help that the iPhone app went through a major overhaul since the version available in June 2011, when I got my first 3M-50.) It’s nice to have both the home and cabin thermostats visible in the same app. 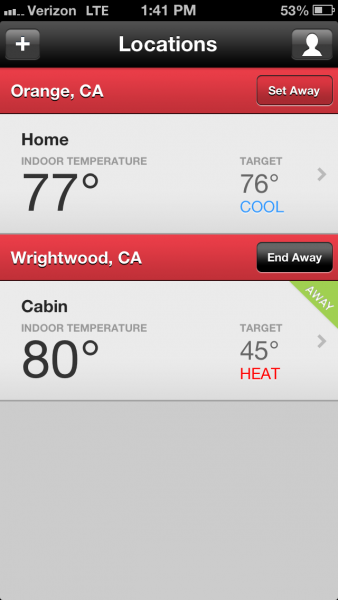 The CT-30 doesn’t have the calendar scheduling that I had with the Proliphix and was also offered with the Ecobee. But I thought of a trick to get the 7 day scheduling to work for me. Since 99% of the time I’m at the cabin on the weekends, the default “occupied” heat setting would be 70F for Friday, Saturday, and Sunday, and 44F for Monday through Thursday.  So if I found out on a Monday that I was headed up to the cabin the upcoming weekend, I could immediately take the thermostat out of “away” mode, but then the heat wouldn’t turn on until Friday. Not quite as flexible as the calendar scheduling, but this is a workaround that gets me most of the way there. Here’s a screen shot of the Friday/Saturday/Sunday schedule when in “occupied” mode. 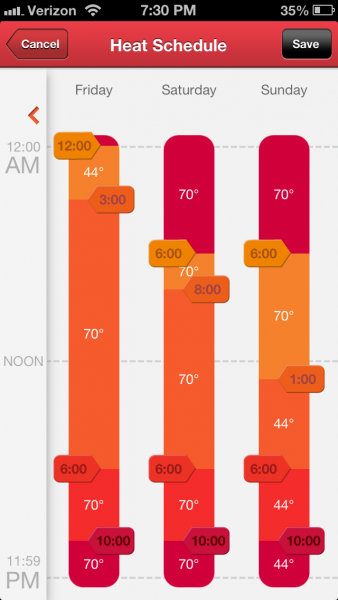 The rest of this post is for advanced users, keep reading at your own risk…

Another benefit of the CT-30, which to my knowledge the others don’t offer, is that there is ability to bypass the cloud and communicate with the thermostat directly. Unfortunately the settings can’t be adjusted directly with a web browser as I could with my old Proliphix, though there is a published API with the commands which programmers could use.

I found a couple of apps which use the API rather than Radio Thermostat’s cloud: Thermostat for Windows and the free iPhone app Thermostapp. Though if someone opens up access for these apps by enabling port forwarding on the router, they need to make sure there’s some filtering, otherwise someone can access an unprotected webpage for the thermostat (in the screen shot below, you can’t see an “advanced” button in the upper right hand of the screen which allows the settings to be changed). 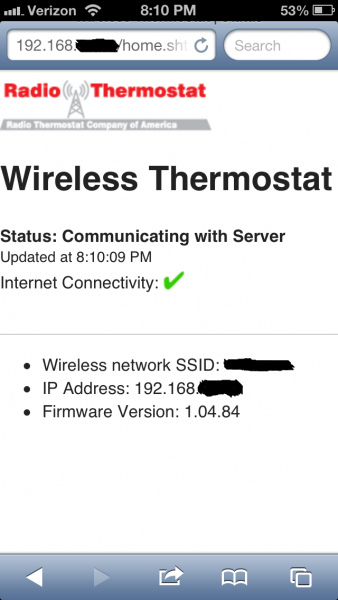 The Thermostapp app, while it has limited functionality, does the basic stuff, and the price is right – free!  (Unfortunately, Thermostapp only pulls up a numeric keypad to type in the IP address, so typing in a domain name is impossible. But I got around that by typing my DDNS name in another app, then copying and pasting into the IP address field.) 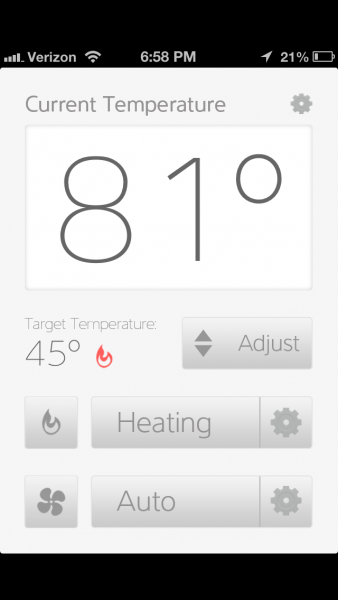 Thermostat for Windows is free to view your thermostats, but you need to pay $13 per thermostat if you want to control it. Note that to add a thermostat, all I needed was its IP address. So if I knew the address of a thermostat, I could connect to it without any authentication, though I don’t know if I could pay the $13 and mess with that person’s heat/cool settings! Good thing I have IP filtering set on my router so that it doesn’t happen to me! 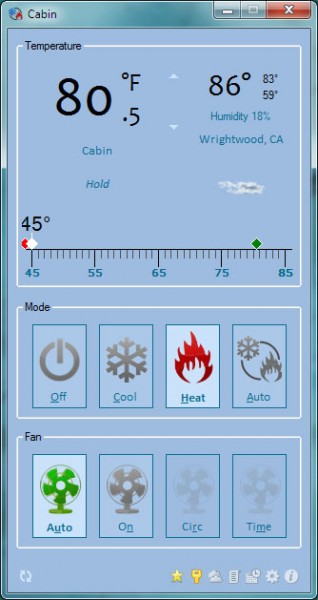 I don’t expect to need the “direct connect” functionality from either of those two programs, since Radio Thermostat’s servers have been pretty reliable, and I believe they have enough of the market that it is unlikely I’ll be left high and dry by them suddenly going out of business. Still, either of these could be a backup option in a pinch.

I also found the open source Thermostat Monitor. Not enough time on my hands to play with that one.

On another note, after driving home from the cabin this afternoon, I had a minor panic when I noticed thermostat connectivity was lost. 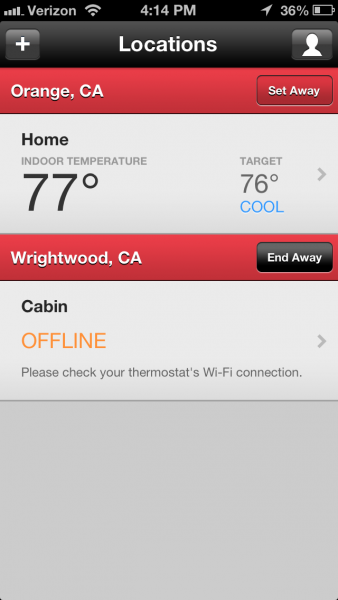