After months (years?) of paying for 1.0 Mbps DSL (and usually getting slower speeds), I was finally able to to upgrade to 3.0 Mbps!

One minor hiccup would be my connection type changing from DHCP to PPPoE. I remotely make the necessary changes to the router configuration (basically just the PPPoE username and password) in advance of the change, so that my service wouldn’t be interrupted. But then on 12:06AM of the day of the service change, I lost my internet connection. I figured it must have had to do with the changeover, maybe the modem needed to be power cycled, or something like that. So I had to make an unplanned visit to the cabin this weekend to get things working.

Although I had not had any problems before, DSL Extreme gave me a heads up that my line or equipment could be slowing down my connection. The modem is clear on the other side of the house from the service entrance jack. In theory, that should not be a problem, so long as it is connected with Cat 5 cable instead of normal phone cord. In practice, there was an issue. as I could not get any faster than 1.5 Mbps. I realize I had used Cat 3 instead of Cat 5 cable for that long run. And I’m sure I accidentally caught a staple in the cable somewhere in the crawl space too.

I scrounged up what remaining Cat 5 cable I had at home and was able to make it to the kitchen to avoid working outside at night. 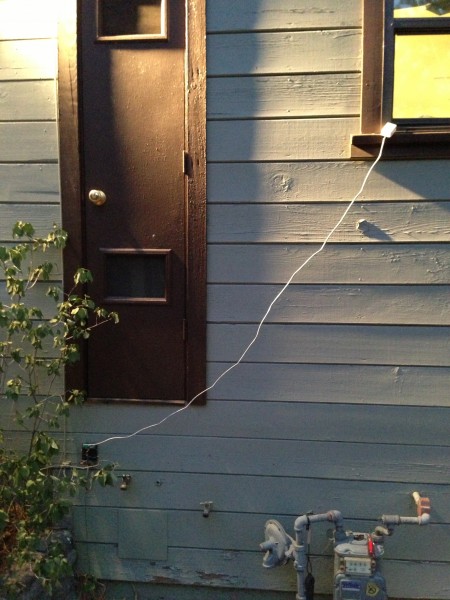 Just long enough to get to the modem (and the spare router, which I cut out of the photo….)! 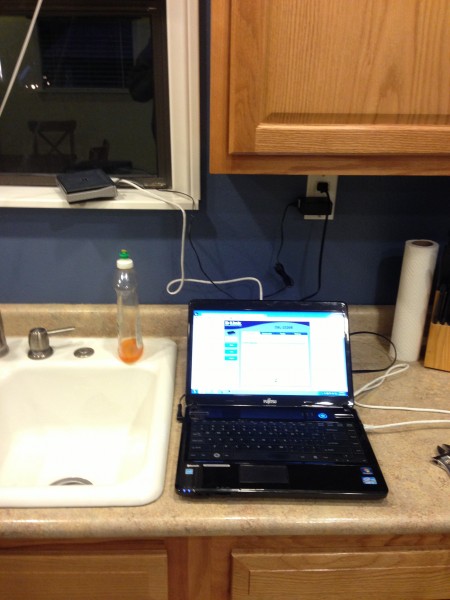 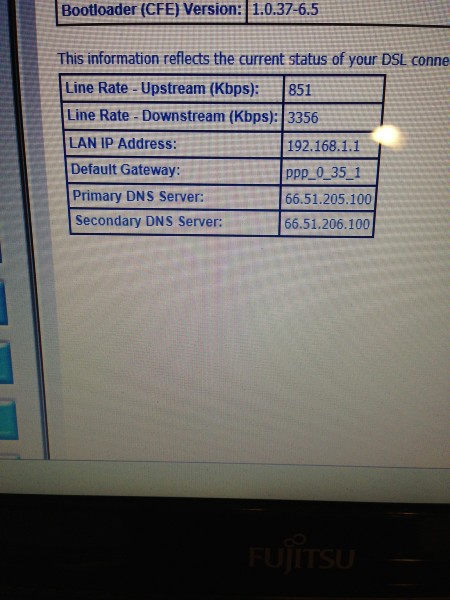 Of course, I couldn’t just leave the modem by the kitchen sink. So the task for the next day would be to do a more permanent installation. But first, a photo of the service entrance jack, in response to someone who said, “oh, just try plugging the modem directly into the service jack to make sure your line isn’t an issue!” 🙂 Hey, this may be old, but it’s been upgraded since last time, they put these caps with gel on the screw terminals to keep the moisture out! 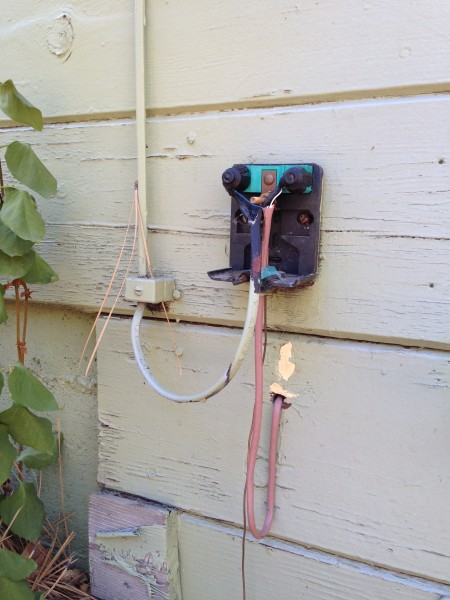 Verizon came back to check my line. Thanks for the staples, Verizon. 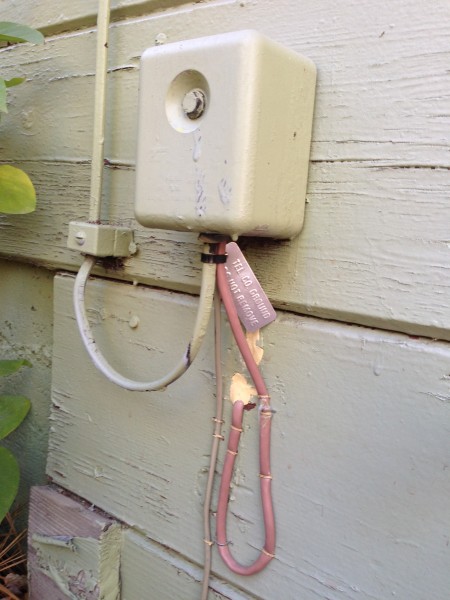 Well, at least they gave me a decent connection to my grounding rod. 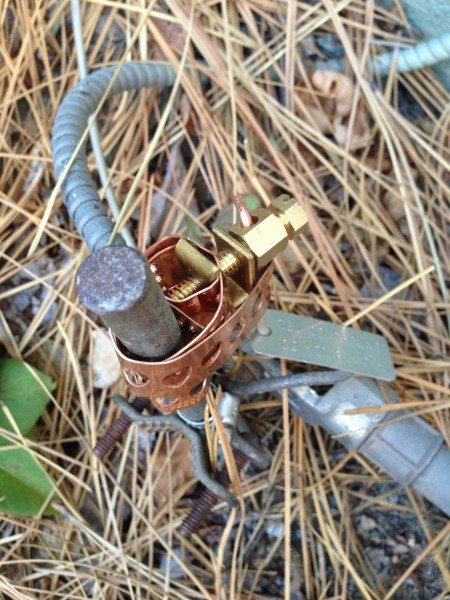 Back to my story … I had two choices, run a new Cat 5 cable all the way to the other side of the house to keep the modem in its original home, or to run a short Cat 5 cable in the crawl space and plug the modem into an existing Ethernet cable. The latter was less work, and it was also less prone to accidentally putting a staple in the middle of a cable! 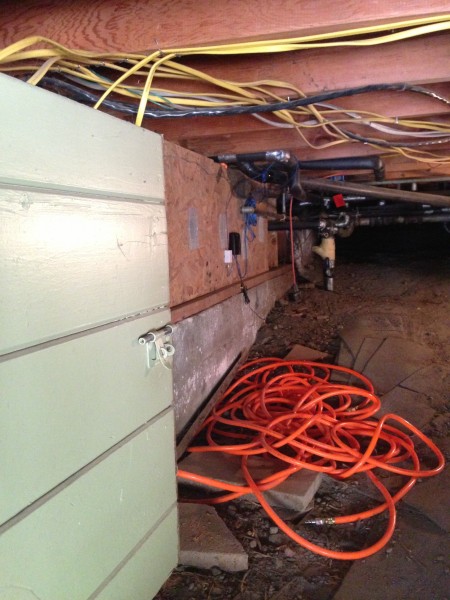 A (pretty bad) closeup of the modem. 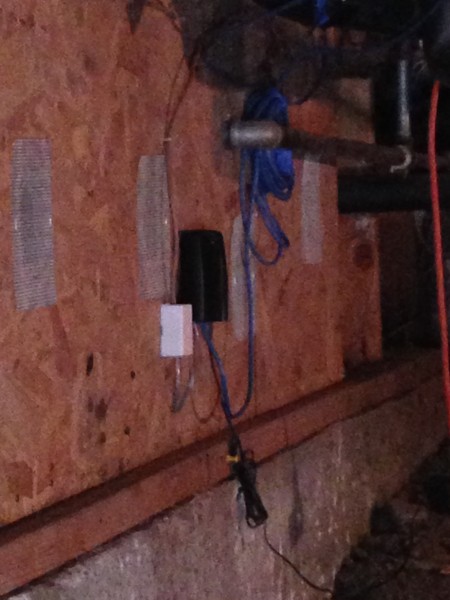 Here’s a better one, after I installed the UPS. (Edit: Don’t put the UPS so close to the modem. I was frequently losing sync to do interference from the UPS. I later moved the UPS about 6 feet away from the modem and now have no problems.) 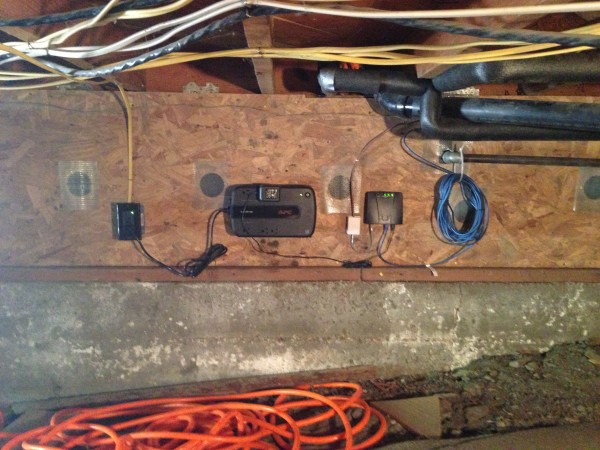 After some trials and tribulations tracking down loose connections, I finally got the DSL modem to “sync”. Then it was off to the router. It would take the PPPoE username and password, but then it would switch back to DHCP every time I told it to use PPPoE. Ah, so that’s why my connection dropped after the speed increase! Must be a bug in the latest router firmware….

One last speed test to make sure everything is working OK… 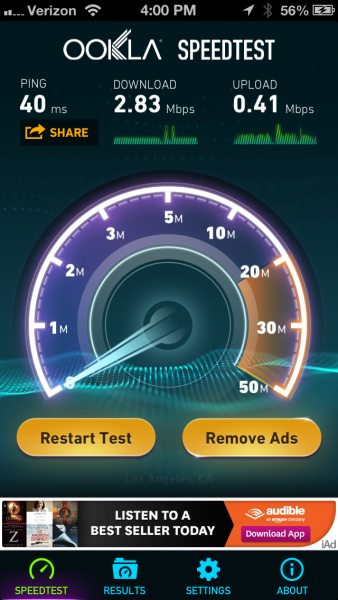 Afterward, I went to the DSL Extreme site just for kicks. It said I could now upgrade to 7.1 Mbps! When I called DSL Extreme to close out my ticket, I asked them if my line would really support 7.1 Mbps. They said it would most likely been good for 6.0 Mbps. That makes sense, since that’s the fastest my neighbors get.