When I last spoke about running here on the blog back at the beginning of the year, I was finally about to shake my toe pain (metatarsalgia), and I had started a runstreak which only lasted three days. Well, it turned out the runstreak would been broken anyway, since I had appendicitis at the end of January, sidelining me for about three weeks. That was a blessing in disguise, as it gave my feet a rest, and I found some new motivation.

I’ve run 5 km (3.1 miles) distance before, but never officially in a 5K event. So last Saturday’s Angels 5K fit in well with a gap in my weekend calendar, and it was a good way to kick off baseball season too. 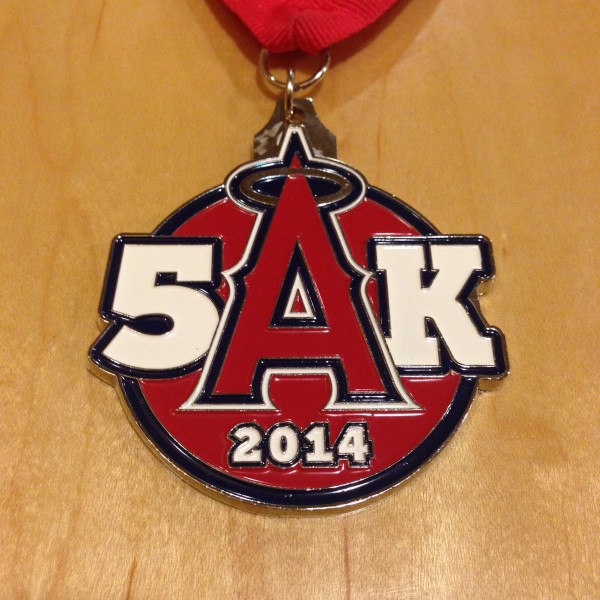 I’ve thought of myself as “slow” since I run about a 9-10 min/mile pace at home. But all of my running at home is on hilly dirt trails in a county park near my house. I had no idea what to expect on a flat course. I was on a business trip last week, and that Wednesday I found a track and ran 5K in a little over 25 minutes on a track. Wow, a little over an 8 min/mile pace, maybe I’m not so slow after all! The track was at 3600 feet elevation, so I figured I could beat 24 minutes at sea level, or at the very least, come in at under 8 min/mile.

I had a minor panic the night before when I found it was bad etiquette to wear the race jersey during the race. Makes sense, as it’s a finisher’s jersey after all. Yet it was still a good idea to wear red, because it was the Angels 5K. So I made sure we had red shirts that weren’t the race shirts (well, except for the kiddo, but he was doing the 1 mile walk). 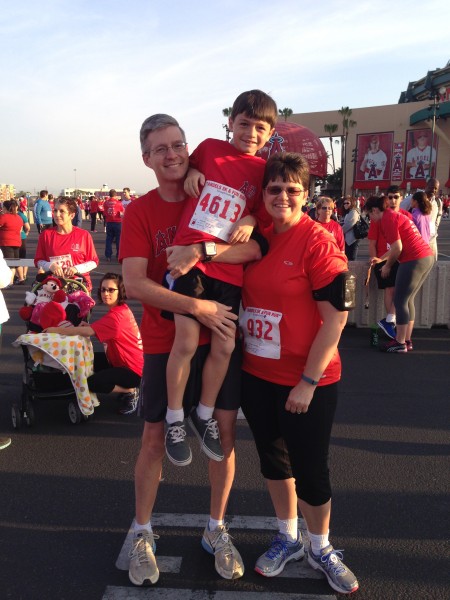 Though when we arrived, most of the runners were wearing the event shirt. That left me wondering whether these were all first timers like myself, or did I miss some memo?

At about 7:45AM, the announcer called for runners to start “moseying on over” to the start line. I was expecting people to, well, mosey on over and start to line up by their expected finishing times, as DCRainmaker has described in the races he’s done. I didn’t want to be too far in the front, but I at least wanted to be in front of the walkers. Instead, the herd suddenly pushed toward the starting line. I was caught off guard, because this happened while I was trying to find some water before the race. (Lesson learned, bring a bottle with me to drink during the time spent hanging around before the race.) Then I found out they were going to start in two waves, and at least I was able to get in near the front of the second wave. (The race is timed with a chip you put on your shoelaces, and the time recorded is based on the difference between crossing the start and finish lines, so there is no time penalty due to starting in that second wave.) 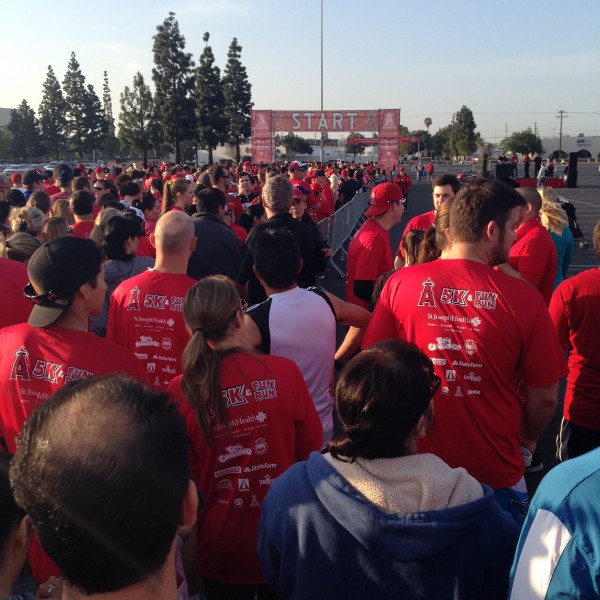 The first wave started the race, then they waited a couple of minutes for them to clear, and they let the second wave go. But once the runners in the second wave caught up to the walkers in the first wave, it became a matter of using whatever available space – including the sidewalk – just to pass. (If you don’t believe me, it’s described in the comments here too.) I was doing so much zigzagging that I wondered if I would end up running much more than 5K by the time I crossed the finish line.

Even at the halfway point, there was still a lot of zigging and zagging going on. There were volunteers handing out cups of water. Unlike a century bicycle ride, you don’t stop to get the water. So I quickly found out I needed to learn the art of drinking from a paper cup on the run.

In a mildly amusing anecdote, at the U-turn at State College Blvd, my wife saw a few runners (deliberately) go off course to the McDonalds. I hope they were just going to use the bathrooms, rather than get a Big Mac. 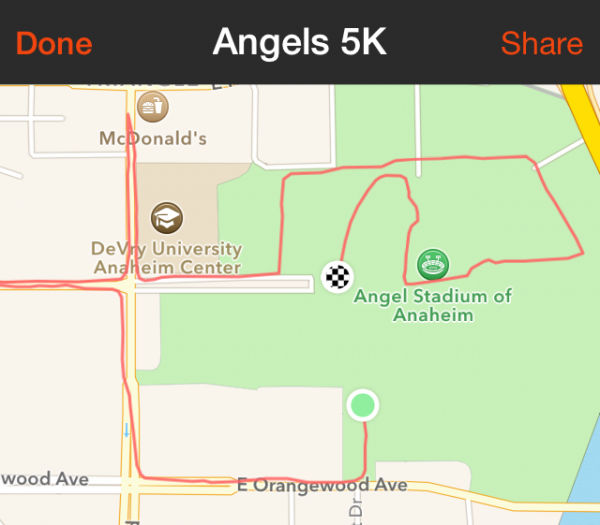 Near the end, we got to run on the warning track inside the stadium. I knew that this could be a potential bottleneck because, well, it was the width of a warning track. I found a group that was going at approximately my pace, so I didn’t have to slow down too much through the stadium. It was kind of an ego boost seeing that they were all half my age. 🙂

Shortly after coming out of the stadium, the finish line was in sight. Despite all of the zigging and zagging earlier, there was still a chance of finishing under 24 minutes! I started sprinting towards the finish, but then I backed off slightly after realizing that beating 24 minutes wasn’t going to happen. Still, I finished strong, and a 7:45 pace for a first time 5K was nothing to complain about! I finished in the top 200 out of 3700 total participants, and in the top ten out of 120 in my age group. 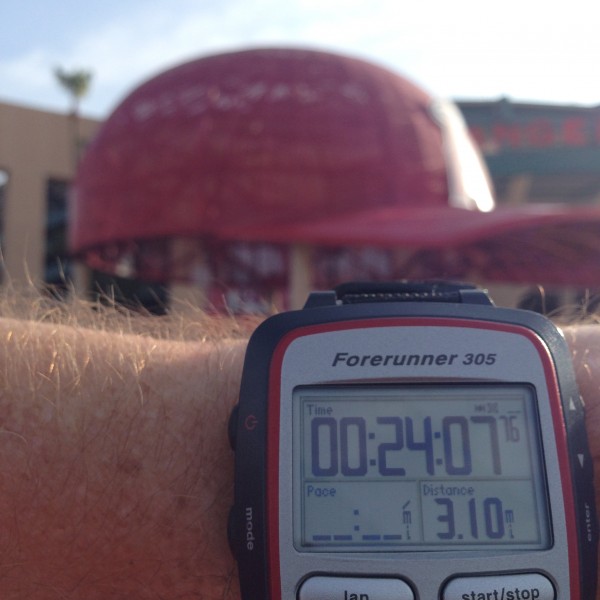 Then it was time to wait for my wife. Where was she? Oh yeah, I just needed to use the “Find My iPhone” app to find her! 🙂 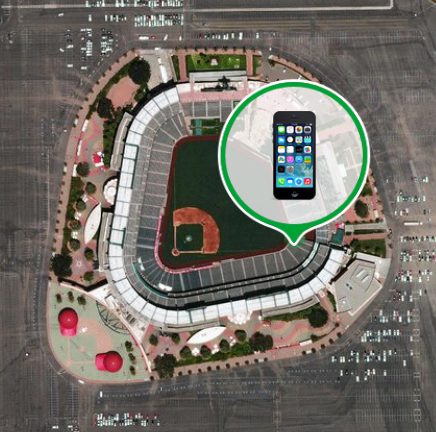 Here’s the map and pace data on Strava – though it thinks I fell a bit short of 5K (just like my pre-race dream, I guess).

Although I don’t think this would be considered a “serious” 5K run, it was still a fun event. Many thanks to those who have supported me – you know who you are. Time to find another 5K event on the calendar a few months from now!