Yesterday afternoon after work, I headed down the hill to the track. Normally I go for an after work run on the hiking trails about 1/4 mile from my house, but in the summer time it’s considerably cooler to head just a few miles down the hill to the track, where there’s much more of an ocean breeze. I had a better day than expected and cranked out a personal record for 5K at 23:21, a quite healthy margin over my previous PR of 24:07 from the Angels 5K last March! 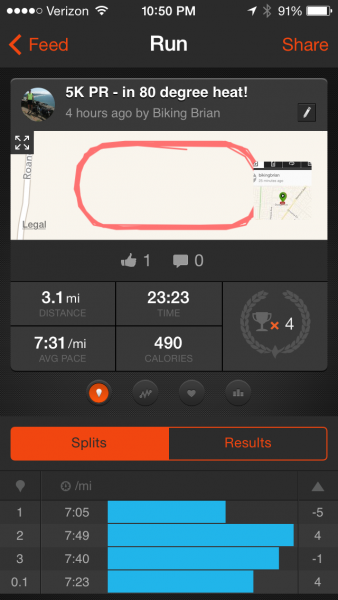 But the bad news is that my back was starting to feel a little sore after this run. At least it wasn’t as bad as when I took it out two weeks ago, when I went for a hard run and then was standing around in a parking lot for a hour afterward, while my back was starting to seize up. Luckily I don’t think I did anything “new” to it yesterday, just that it didn’t completely 100% heal from two weeks ago.

Now I am questioning my plans to run a 5K race on the Fourth of July. I thought it would be neat to run in the local 5K in the morning, followed by watching my son’s Cub Scout pack in the neighborhood parade on the same route. But that afternoon I’m catching a flight up north to start a ten day bicycle tour. The last thing I want to do is tweak my back, followed by sitting on a plane for a few hours. So I will likely cancel on the 5K, focus on the bicycle tour (details coming soon to this blog!) and look for another 5K race in the fall or winter.