In mid-December, I hurt my foot (plantar fasciitis) and decided it would be best to lay off the running for a while. I’ve heard of runners using the ElliptiGo as a cross training tool, and it just so happened that I was able to pick one up used!

Here’s some information on some tweaks I ended up doing to the ElliptiGo to make it more suited for my needs. In a future post I’ll talk more about how it is working out as an exercise/training tool.

Purchase and First Ride (with 3 speeds)

I found a good deal on a used 3 speed from Craigslist. Shortly thereafter, I took it out for its maiden (to me) voyage on the relatively flat Santa Ana River Trail. 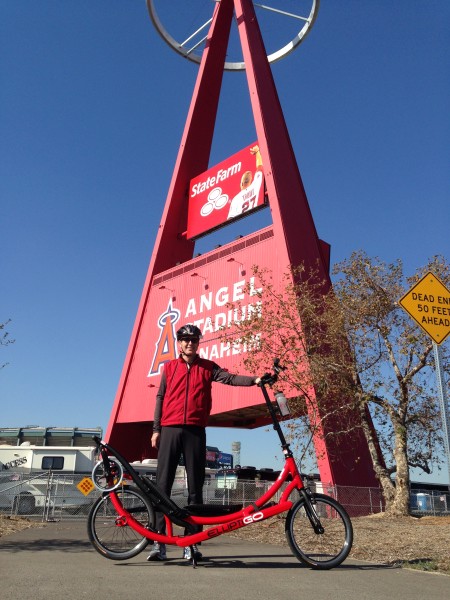 Here’s a really shaky (iPhone) video clip of it in action:

This first ride went well! I definitely got a lot of looks from others on the trail. The main downside was that I had a little trouble making it up the short steep rises where the bike trail goes under streets and then back up again.

Upgrading from 3 Speed to 11 Speed

Based on my short experience on the river trail, I knew that the 3 speed wasn’t going to cut it in the hills where I live. So I bought the parts to upgrade it to 11 speed. 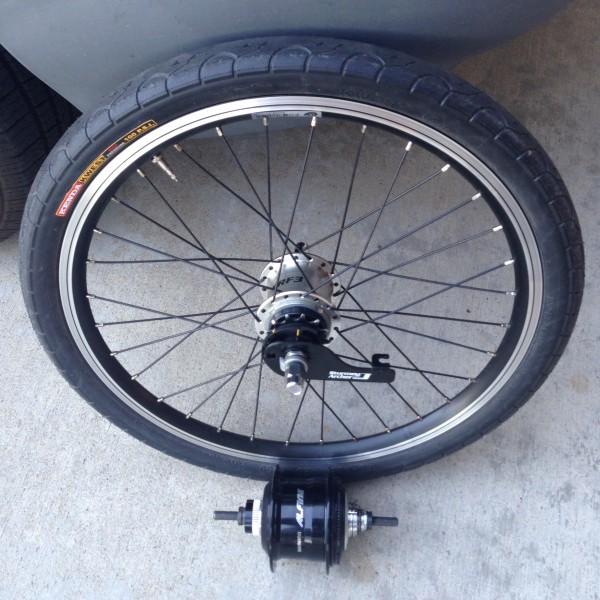 There’s no derailleurs on the ElliptiGo; all the shifting is done in the hub. The Sturmey-Archer 3 speed hub is similar to that from my old bicycles from the 1970s. Nowadays Shimano makes their Alfine internally geared hubs in 8 speed and 11 speed. I got the great deal for the 11 speed hub and shifter online for only $385! (Though, in retrospect, that was not as good of a deal as it initially seemed, see the epilogue below.) Unfortunately, the hub normally doesn’t come with everything needed to install it on the bike. Luckily it came with a bag with most of the small parts. 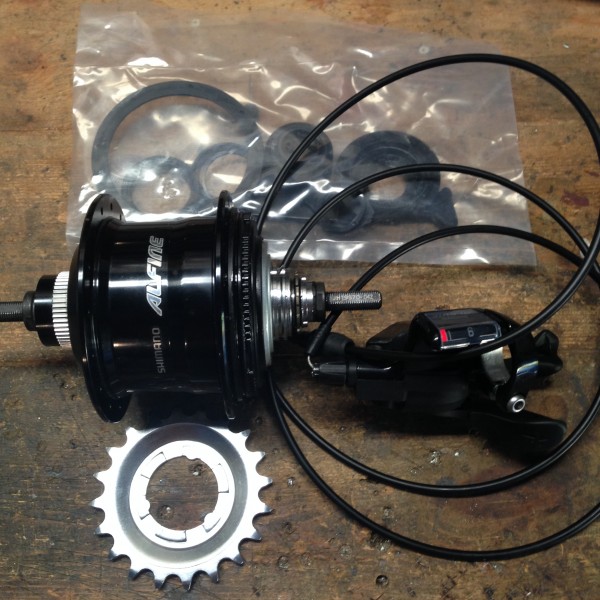 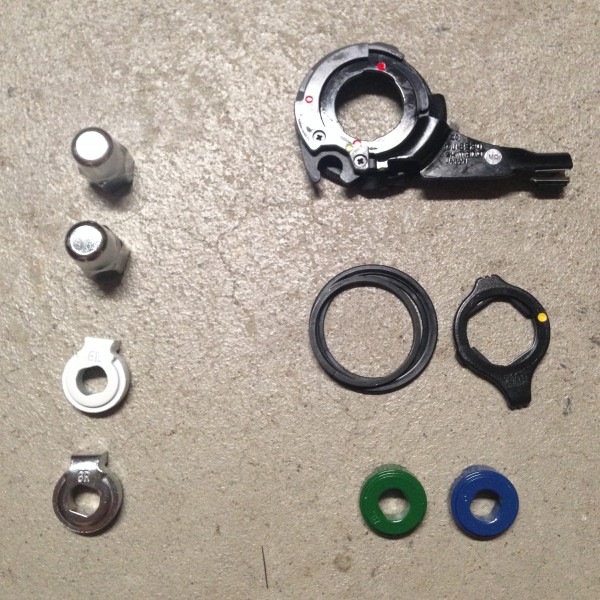 I originally ordered the 20 tooth cog (sold separately) as shown a couple of photos above. Based on my bicycling experience, I would normally rather have my gears slightly lower than compared to the stock 11 speed setup with an 18 tooth cog. I figured that the ElliptiGo’s really long horizontal dropouts (about 4.5 cm) would pretty much allow me to use any cog with the 52 tooth chainring. 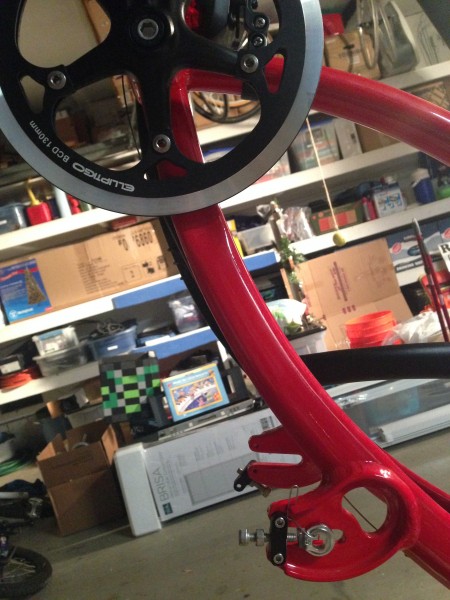 But in reality, because the crankset is above rather than forward of the dropouts, those long dropouts only result in an “effective chainstay length” adjustment between 32.7 cm and 33.4 cm. I did some checking using the Fix Me Up! calculator, and while the 18 tooth cog would be near the middle of the dropouts, there would not be enough adjustment to make 20 tooth cog work with a 52 tooth chainring unless I went with a half link (I didn’t want to go there). Of course, changing the chainring is an option, but that was an added expense I did not want to consider at this time.

At first, I decided to go with the standard 18 tooth cog. Although I expected that the wheel would be in the middle of the dropouts, the reality was that the wheel was all the way back. This put the brake pads near the bottom of the brake arms, making them tricky to adjust (but still do-able). Furthermore, the lowest gear wasn’t quite low enough for climbing the steepest hills in my area (at the time – that has improved with more rides on the ElliptiGo), at least without my heart rate going through the roof. So I added an extra link in the chain and switched to a 21 tooth cog. Not only did this give a lower low gear without giving up too much on the high end (my high gear is now equivalent to that from a stock 8 speed ElliptiGo), it also allowed the wheel to be further forward in the dropouts, making brake adjustment much easier.

Here’s a table of the various gearing options I considered (reported as gear inches).

After a few months of experience and improved ElliptiGo fitness/experience, I found that low gear with the 21 tooth cog was much lower than I needed for the 6% grades in my area, and the high gear wasn’t high enough, requiring me to coast in situations where I could otherwise still safely pedal faster. So I switched back to the 18 tooth cog, giving a low gear that was still low enough, while actually having a high enough high gear to be able to pedal on the downhills.

Unlike conventional bicycles which have brazeons for mounting water bottle cages and other accessories, ElliptiGo users are left to their own devices for carrying water, spare tubes, etc. I had a couple of clamps from Minoura which would work for attaching a water bottle cage to the long steerer tube. Most people use the mounts with the quick releases, which look to be stronger than the metal band which wraps around the stem. But these mounts were already in my parts bin, so I thought I would try them first. 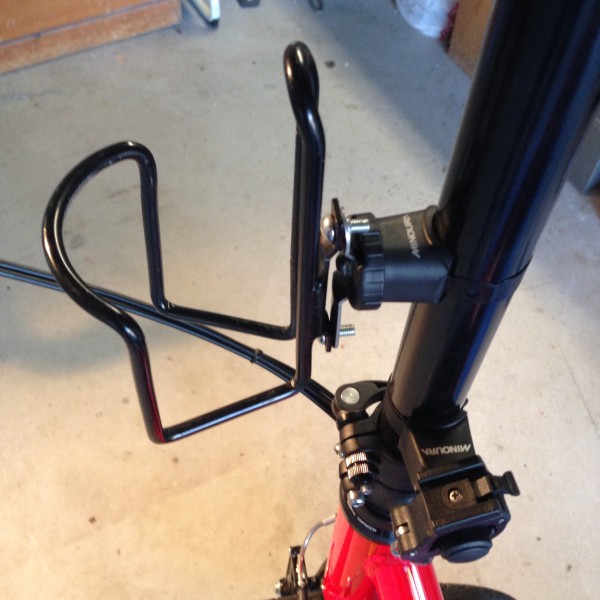 On the ElliptiGo Facebook forum, I heard reports of breakage of the steel piece that holds the water bottle case. Such a failure here would be worse on this mount compared to the quick release mount, as the allen screw on this mount does the double duty of holding the steel piece and securing the mount. I replaced the standard steel band with some aluminum stock I had on hand, which gave a much more sturdy setup. 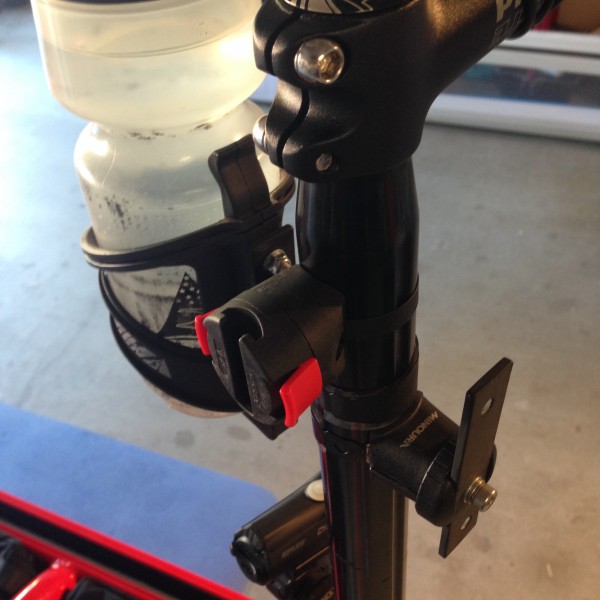 I added a mount for my Garmin, a small bag for my phone/keys, and a bell for the bike trail. 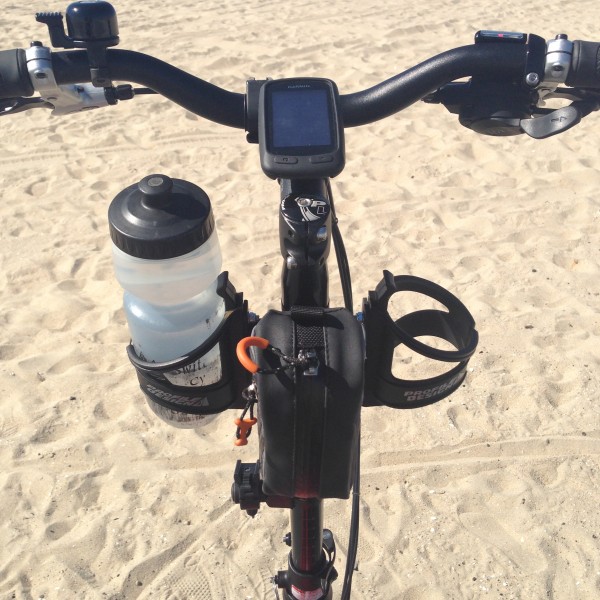 I also added a couple of Stand Up and Ride bags which fit in the spaces between the tracks (I forgot to take a photo).

One downside of the ElliptiGO is that it’s big and heavy, making it hard to transport. Originally, I could only get it to fit inside the minivan with one of the back seats removed, and still taking up a lot of space to boot. 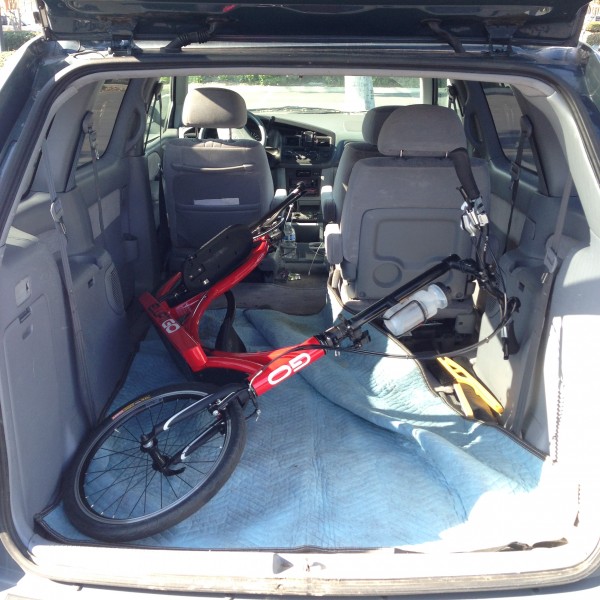 I then went searching through the garage and found my Hollywood Racks F4 Heavy Duty trunk rack. There’s no bike cradles on the support arms, making it possible to slide the ElliptiGo onto it. Though I didn’t like having to lift the ElliptiGo so high to get it on the rack! 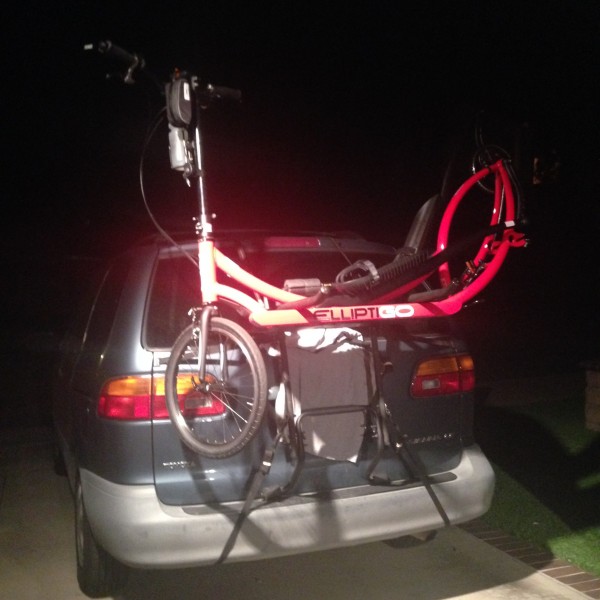 I then lowered the rack to the “sedan” position. That is too low to carry bikes on the minivan, as the tailpipe would be blowing on the wheels. But this position is perfect for the ElliptiGo.

I asked Hollywood Racks for their opinion on this installation. They recommend their Gordo rack for carrying the ElliptiGo, as the two arms are spaced 22″ apart for better weight distribution, rather than the 18.5″ for the F4. But I believe I should be able to get away with this setup for short trips.

I found a better way to keep the ElliptiGo inside the van, using my homemade rack normally used for bicycles. The handlebar comes off to do this. 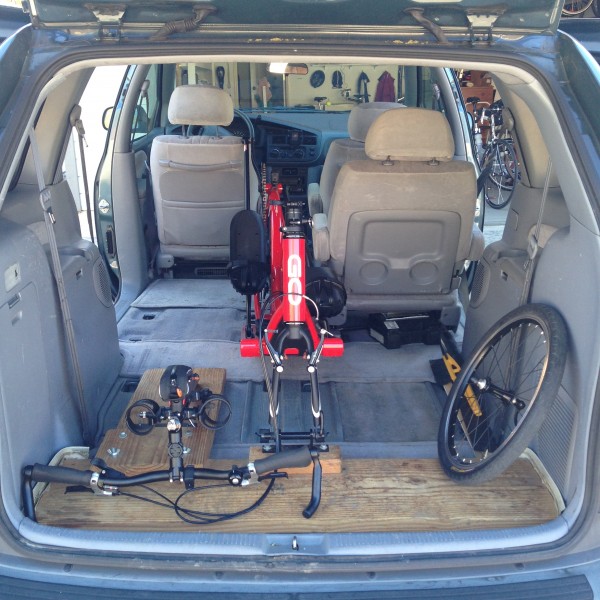 I now have a trailer hitch on the van and using the Hollywood Racks 1450R hitch mount rack, as described in this post.

Here’s a photo after the upgrade to 11 speed! (Oh, the bags between the tracks are in this photo.) 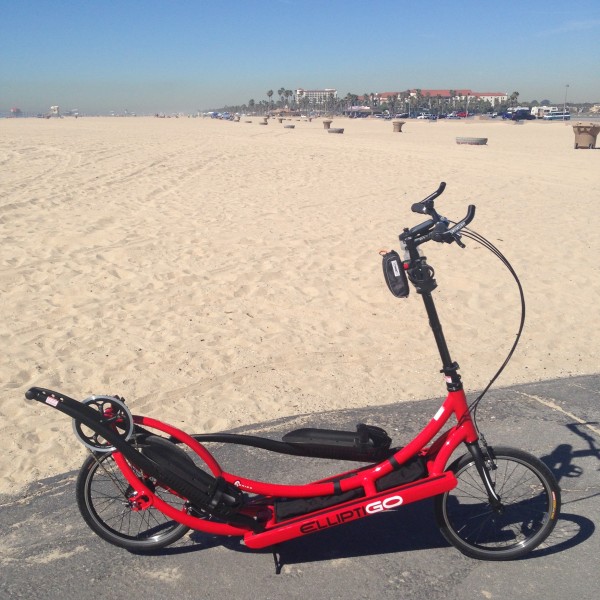 I’ll write another post with observations and advantages/disadvantages of the ElliptiGo, after I get a few rides under my belt.

After about 150 miles, I ran into problems with shifting into gears 10 and 11. After ruling out cable adjustment issues, I had a reputable shop take apart the hub to inspect it, and there was excessive wear in gears 10 and 11, much more than what would be expected for 150 miles of use. My understanding is that these hubs have generally been good, but there have been issues with some. (Although to Shimano’s credit, I understand they have done a good job of replacing them under warranty.) Or I might have bought one that was advertised as new, but with the internals unscrupulously swapped out for damaged ones. Ultimately, without a proof of purchase from a legitimate supplier, I had to eat the cost for repairs. Lesson learned for buying parts for cheap parts online, especially in a situation you may need the manufacturer’s warranty.