With most of my calls on my mobile phone these days, I don’t use my landline much anymore and wanted to eliminate it. Yet after 20+ years, it is tied to so many records (plus it is the only number which some know or will use) that I don’t want to lose that number. I had the idea of porting it to Google Voice (which would give me the options of forwarding calls to my mobile phone, or sending them to voicemail and getting a notification on my mobile phone), but currently only mobile numbers can be ported in to the service. A workaround described here describes the steps of first porting the landline number to a T-Mobile prepaid account, and then porting it from there to Google Voice.

So I bought two T-Mobile SIM starter kits on Amazon, found my old LG flip phone which I keep for “emergencies” like this (as well as a potential threatened downgraded phone for my teenage son, but I digress…), and then started the process in the article above. I had two landline numbers (actually, former landline numbers which were previously ported to a VoIP service, but still considered a landlines for the purposes of this post) to port, and my porting experience was a bit different for each one. 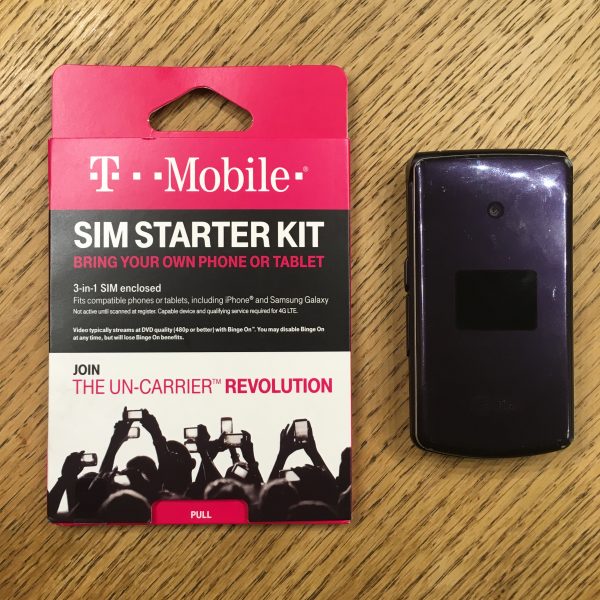 I followed the instructions in the SIM starter kit to activate the SIM, chose a (temporary for me) phone number, created a T-Mobile account, and linked it all together. The cheapest plan was $3/month, but the minimum amount I could apply to my account was $10.

Then it was time to start the port to T-Mobile. I tried calling prepaid support and experienced hold times of over an hour. So I instead went to my local T-Mobile store. They looked up my account, and then they asked for the number I wanted to port in, as well as my old provider’s account number and PIN. Anticipating this, I had already asked my VoIP landline provider for my account number and PIN, and they said that the account number was the same as the phone number, and that there was no PIN. So I told the agent the phone and account numbers and said that there was no PIN. But then she said, “well it’s asking for a PIN”. I asked if she could just leave it blank, and basically the conversation ended with her giving me a number to call. Although it was a phone number I didn’t have before, it went to the same place with the long hold times.

Later I found a direct number for the porting department. They answered the phone without any wait time. They took my phone and account number, were not taken aback by my lack of a PIN, and a day later they called me back saying they also needed my address on file with the previous provider. I gave it to them, and about five days later (the landline to mobile ports take much longer than the mobile to mobile ones) the port to T-Mobile went through.

The subsequent port from T-Mobile to Google Voice was smooth. I needed the PIN that I had set up with T-Mobile and had to pay a one time $20 fee to Google, and the port happened in about a day.

After I got the first number ported, I started the second port. To my surprise, quite a few things changed between the two.

When activating the phone and setting up the account, the T-Mobile website had changed since last time, and I had to provide payment as part of the setup process, rather than at the very end. But I was able to only pay the $3 I needed for the first month, rather than the $10 minimum I paid for the other line.

Then I called the direct number for the porting department which I had used previously. They looked up my account and said “oh, you’re prepaid, this is the business accounts line, we’ll transfer you” – to the same place with the long hold times. I called again just to make sure I didn’t get an agent who made a mistake, and the other agent transferred me also.

Rather than deal with long hold times, I decided to find a different T-Mobile store. The agent was not fazed by the lack of a PIN and was able to submit the porting request. He was able to check the the status and it at least got submitted without any errors. And with the website changes, I was now able to see more information on my account – including that the port request was submitted and was in process.

The next day, I checked my T-Mobile account activity log, and there was a port in error listed and that I needed to call for more information. After calling and entering my T-Mobile number and PIN, somehow I was immediately (!) connected to a representative, who told me that only the ZIP code was submitted in the port request and that he needed to verify my billing address with the other provider and add that to the record. Then that updated port request failed, and I had to call again and repeat this process a few more times (probably to iron out spelling errors in my name and address, since this is all done over the phone and I have no way to visually verify the information to see if it matches how it is entered in my old VoIP account I was porting from) over a two week period until the port to T-Mobile went through.

So what I am doing with the numbers now that they’ve been ported to Google Voice? More on that in my next post!