As part of my cabin remodeling, I’ve been replacing old electrical wires with new ones over time.  Although I’m not done yet, at least I have a concept of how I could remove (or abandon in place disconnected) each old piece of wire – except for one section that has eluded me.  This is a photo of where the old wire goes to a junction box in the laundry room (because that’s where the exterior wall used to be), and a newer wire connects from there to the light fixture. 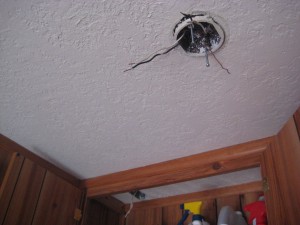 The problem was that attic above the addition was inaccessible, since the old roof was retained and the new roof built over it.  So I cut a section of the old roof away (including cutting through three layers of shingles!) to get into the formerly inaccessible portion of the attic.  The addition is the part with the pink insulation. 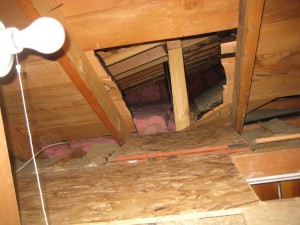 Once cutting an opening, I could lie on the plywood in the foreground and squeeze my way through the opening.  Here’s the wire after removal. 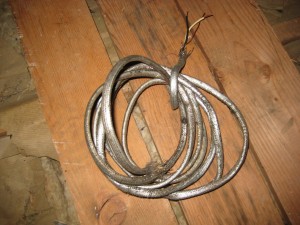 In case anyone is wondering why I’ve gone through so much trouble to replace a section of wire, the real reason was that I was investigating routing for dryer venting – but more on that in another post.