I have a Panasonic BL-C30A wireless network web camera.  It’s an indoor camera which I originally bought for indoor use, but then I decided I wanted an outdoor webcam.   Webcams that were both wireless and outdoor rated cost more than I was willing to spend.  So I ended up having the webcam inside a window, pointing outside.  This wasn’t a completely satisfactory solution, as I got quite a bit of glare from the window, as well as a restricted field of view due to the window frame.

Rather than buy a new webcam, I started looking at outdoor enclosures for my current camera.  My camera is rated for operation down to 40F and exposure down to 32F – which I believe is fairly typical for these types of cameras.  So most off the shelf outdoor enclosures have a heater and a blower, which wouldn’t make it cheap.  I found this site with a $27.34 DIY webcam enclosure.  I figured that if his setup could work in zero degree temperatures in Colorado, something similar would be just fine for typical low temperatures around 20F in the Southern California mountains.

I started off with a $9.99 Carlon plastic 6″x6″x4″ electrical box, which I screwed to the back of my garage.  I drilled a hole in the upper right corner to pass the power cord through. 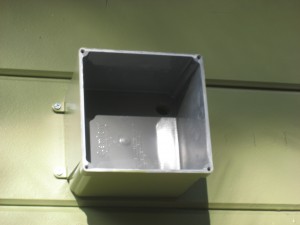 The webcam slid in there just fine, and I put the transformer inside in order to provide some heat. 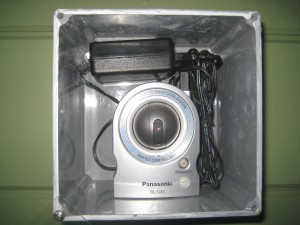 Finally, I found some leftover pieces of fiberglass pipe insulation and put them around the sides to keep the camera warm.  I made sure I had an open path to the hole in the upper right to vent back to the garage.  Then I discarded the plastic cover to the box and screwed on a trimmed a $3.95 piece of plexiglass to the front. 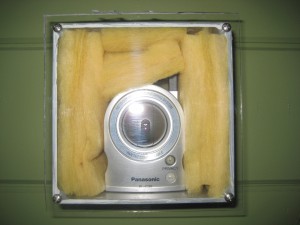 For the moment I’ve decided not to seal the plexiglass to the electrical box, as the setup is somewhat protected from the elements as shown in the photos below.  (Edit: First photo below replaced with one after we got over two feet of snow, camera was OK!) 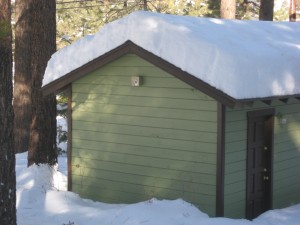 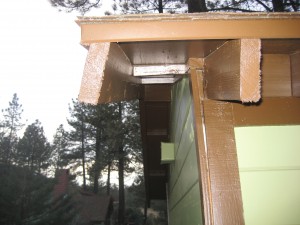 We’ve had 20F daytime temperatures all week, and the camera has been working fine.  The only problem is that the lens sometimes doesn’t like to move.  I believe that is due to power cord in back falling down, pushing the camera forward against the plexiglass.  I should be able to secure the camera to fix that problem. (Edit: The power cord was indeed the problem – I fixed it by putting it to the side of the camera, as shown in the photo above.)