Regular readers of my blog entries from previous bike trips know that I try not just to talk about the riding, but also the people and places along the way. But today was a challenging day, so this day’s entry is (mostly) about the riding. So deal with it! 🙂

The train was supposed to arrive in Flagstaff at either 5AM or 6AM – not sure which because the train left California before the daylight savings time change but arrived in Arizona afterward, and complicated by the fact that California changes the clocks but Arizona doesn’t. Nevertheless, the train was already a half hour late picking me up in California, and so more delays on top of that meant the train didn’t arrive in Flagstaff until 7:30AM. In transit, the bike started rolling its way out of the side of the previously water damaged box. Luckily, no damage was done, and (thanks to the friendly station attendant for allowing me to set up the bike inside, despite the “no bicycles” sign on the door) me and bike were ready to roll at 8AM!

Rolling out of Flagstaff, I was feeling comfortable in the 23 degree temperatures. That was short lived, because once I left town, I could feel the strong headwind, which I later learned brought the wind chill down to 12 degrees. The first part of the ride had only pieces of the original Route 66, thereby requiring use of the I-40 shoulder in some places (legal in most western states outside of urban areas). So I alternated between some protection from the wind due to the pine trees along parts of the old highway, and no protection at all from the wind on the wide open sections of I-40. 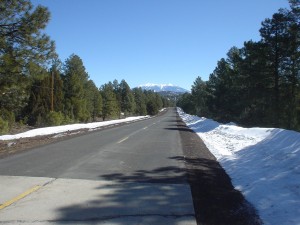 I had forgotten to bring my maps from Flagstaff to Williams, probably because I printed out the wrong set, as this trip that was supposed to happen last fall was going to start out of Williams. I remembered most of the routing from the previous time I had done this section, but I when I stopped in Bellemont to warm up some frozen fingers, I was able to get some assistance from locals regarding which parts of the old highway went through and which were impassible dead ends.

By the time I rolled into Williams for lunch, I had only done 30 of the planned 84 miles for the day. Normally I like to get more than half of the miles in before the lunch stop, that allows some flexibility in the afternoon. So I was a bit concerned at the progress. The Pine Country Restaurant was pretty yummy and quick, and I was in and out in a half hour.

After the rolling terrain from Flagstaff to Williams, the section from Williams to Ash Fork would be a 1500 foot drop in 15 miles, with up to a 6% downgrade. Still, I wasn’t going to get my hopes up, as the last time I had done this was into a stiff headwind, where we actually had to pedal to keep moving – on a tandem, no less, and only at 15 mph. Well, today much have been my lucky day, because the winds had died down after finishing lunch, so this time I was able to coast down the hill at 25-35 mph almost all the way into Ash Fork! 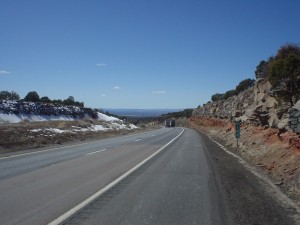 By now it had warmed up enough for me to switch from my cold weather gear to my cool weather gear. I was concerned about the extra load on my saddlebag, but that proved not to be an issue. 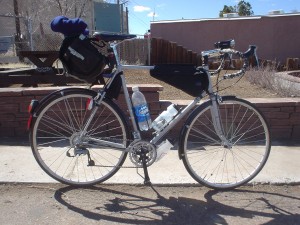 I tried to find the old highway that my map said connected between I-40 exits 144 and 139, but all I saw was a Chevron at exit 144 with no road that went through. So I jumped on I-40 for 6 miles to exit 139, and then exited on to Route 66 again, where it would just 17 miles to Seligman, the day’s destination. 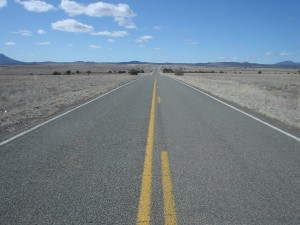 The map showed Route 66 as a straight line paralleling I-40 from my current location to Seligman, and the destination elevation was about the same as my current location. So that should be an easy flat 17 miles for the home stretch, right? Wrong! After the first couple of miles, it was evident that the road was starting to climb. I saw some mesas off in the distance, and I said to myself, “oh s***, this road has to go over the mesas. And it did so by going straight up and over them for the most part, rather than switchbacking which would actually make the climbs less steep.

Add to that the end of the day headwind that started picking up the first couple of miles into the 17 mile section. It would even taunt me by letting up for a moment while I stopped to “relieve” myself, then picking up again when I started pedaling. 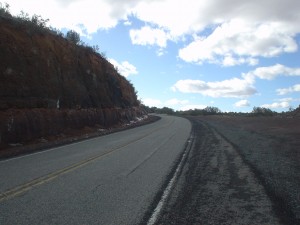 Eventually I reached an unnamed but marked summit at 5700 feet. There was even still some snow on the side of the road. I didn’t get the screaming downhill that I had expected/hoped for on the other side of the summit, instead I was treated to more rollers in a headwind. 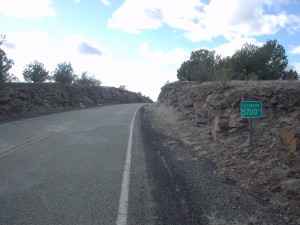 I finally made it to town just before 5PM – later than I’m normally comfortable doing, but early enough so I wouldn’t have to go scouting for motels in the dark. I stayed at the mom and pop Canyon Lodge, where every room has a theme – my room had an Elvis theme. After dinner I had to muster up enough energy to write the day’s report, and when I saved it as a local draft in the WordPress iPhone app, I lost my whole writeup. It’s a bug with saving local drafts, since I have a cellular connection, a day later I have rewritten the Day 1 update, this time saving as a draft on the server instead of locally. If you can read this, it worked this time! 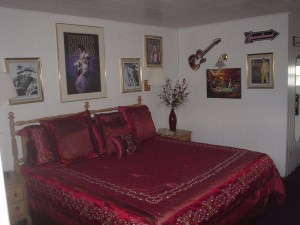