I forgot to mention that yesterday’s 77 miles was a little shy of my expected 84 miles. My cycling computer must be a bit off, or I must have used the most direct I-40 shoulder in a location where I had originally planned to use the old highway. Today’s planned route is 89 miles, all of it on the old Route 66 with no turns, so I would find out for sure whether or not the computer is the issue.

Heading west out of Seligman (which I was told was the motivation for the fictional “Radiator Springs” in the movie Cars), the Route 66 and I-40 alignments take greatly different paths, rather than being roughly parallel as was the case on the first day. That would ensure today’s ride would be a step back into time. I first noticed this when I lost my cell phone signal leaving Seligman. I wouldn’t get it back until the final approach to Kingman. 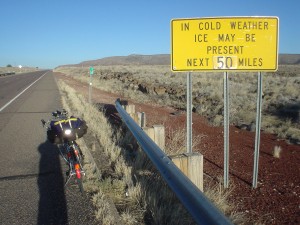 Route 66 was two lanes (one lane each way) with wide shoulders. Although the lanes themselves were relatively smooth, the shoulder was not, providing a bone jarring experience. This would be the case for most of the day’s ride. But with the road so lightly traveled and the sight lines so good, it was easy enough to use the smooth pavement in the travel lane most of the time, using my rear view mirror and moving over to the shoulder as needed.

Just like yesterday I had started off the day with my cold weather gear. But more importantly, I had a tailwind this time, and although I didn’t know exactly what was waiting for me in the middle, the route would have a net downhill, starting at about 5200 feet and ending at about 3300 feet.

Thanks to the tailwind, I breezed past Grand Canyon Caverns, only stopping to take a couple of photos. Then after where the highway enters to the Indian reservation, but before reaching Peach Springs, I saw a sign warning about a truck lane coming up. Uh oh, I said to myself, that means a big hill. Well, that was true, but it was a truck lane on a 6% DOWNgrade! With the combination of the downgrade and the tailwind, I rolled into what looked like a small town at about 40 mph! 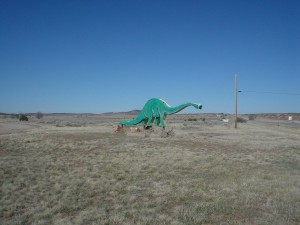 I saw signs further back saying there was food and lodging in town, but after riding around some residential areas I found none. It was quite a shock seeing the living conditions on the reservation. Part of me wanted to take some photos, but the other part of me didn’t want that to be taken as a negative gesture. So no photos of this part.

Finally, I figured out that the rest of the town was “just around the bend” in the highway, and so I saw the lodge, restaurant, post office – and also the railroad tracks rejoining the route. I already had 35 of 89 miles done by about 10:30AM, so it was a good time for breakfast. The restaurant also had free wifi, so I was able to upload some waypoints to my map. It had warmed up during the day, so I changed from my cold weather to my cool weather clothing. 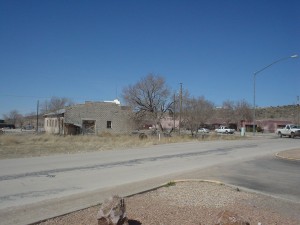 After leaving Peach Springs, the terrain became a little more rolling, although still on a downhill trend with a tailwind through Truxton and Valentine. Hackberry had a neat general store with snacks, drinks, and Route 66 memorabilia. 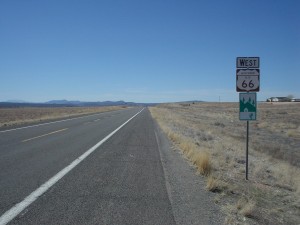 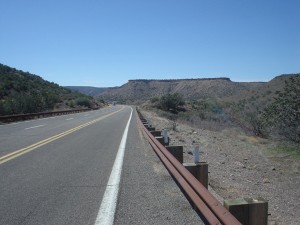 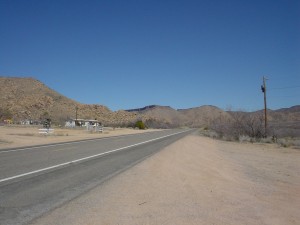 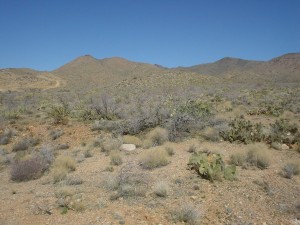 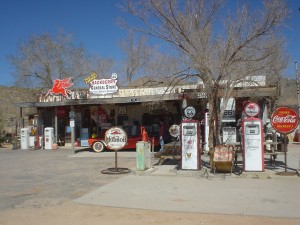 After leaving Hackberry, the wind changed from a tailwind to a headwind. Looking at the map after the ride, the reason is clear – I had just crossed a small mountain range, so now there was a place for the wind to blow in from the north. Even so, these last 30 miles with a headwind were nowhere near as bad as the conditions on the first day. Furthermore, it was starting to get warmer, so I was down to my jersey and shorts. 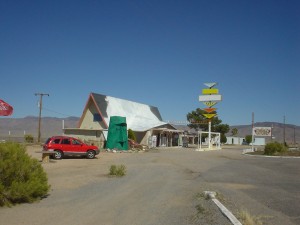 Kingman would be the largest city/town overnight stop on the route, and so I started seeing the various lodging choices on the approach to town. I saw I-40 up ahead, and recalling from previous travels on I-40 and stopping in Kingman, the Motel 6 was near the old downtown. So when I saw the Motel 6 at mile 86 on my computer (see, my computer is reading a little low, as the forecast was 89 miles), I pulled in and checked in. It was only after I settled in that I found out that Route 66 is close to I-40 at two locations in Kingman, and there are two Motels 6, each one near an I-40/Route 66 junction. I was at the wrong hotel, about three miles away from the old downtown, with a big hill separating the west and east sides of town!

I decided to make lemonade out of lemons and ride to the post office to mail back home all my cold weather gear (I need the space for more food on Day 4). The Google maps showed the post office on the wrong side of the street, and so I ended up riding right by it, bombing down the hill from the east side to west side of town, only having to climb back up it again. Luckily the post office was open until 5:30, instead of 5 as I had expected, so I was able to squish that gear into a flat rate box and mail it off. I decided to have dinner near the hotel room (a medium 12″ pizza that I ate all myself), and so the plan is to explore the older part of Kingman tomorrow.