Since today was going to be a relatively short day, followed by a long ride the following day, I decided to sleep in and wake up when I felt like it – which ended up being 7AM instead of 6AM!

In my mad dash to ship the cold weather gear at the post office yesterday, I had accidentally threw in there my knee warmers. Oops. So it was off the to the local bike shop the morning, which was 3 miles north – i.e., 6 miles out of the way when you count the out and back. Good thing they opened at 8AM – real early for a bike shop. 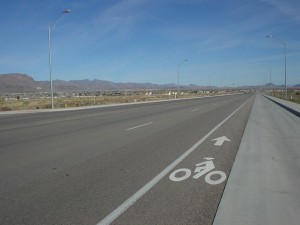 As would be expected from a not-so-big town/city, the bike shop had mostly kids and mountain bikes – although they had a decent selection of other accessories, as evidenced by them having the leg warmers in a couple of different sizes. I spent quite a bit of time there talking with the owner, who was a friendly guy. I got the impression that he didn’t currently ride a bicycle, but he rides motorcycles and was familiar with all the roads in the area, and so we were talking about the various routes to get to Needles.

So after leaving the bike shop, which was on the far north side of Kingman, I passed by a whole bunch of Kingman suburban retail (Home Depot, WalMart, etc.) which I didn’t know existed there. Finally, after 10 miles for the day, I reached downtown Kingman (hotel was 3 miles from downtown, bike shop detour was 6 miles round trip, plus another mile in there somewhere), and after leaving town on Route 66, the bicycle touring portion of the day finally began at 10:30AM! 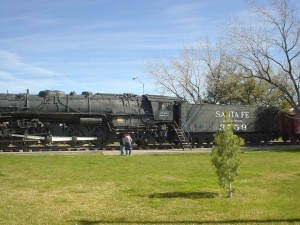 After crossing under I-40, Route 66 diverges from the I-40 alignment again and heads up the hill towards Oatman. Almost immediately the pavement quality took a turn for the worst! It wasn’t so bad when it was a slight downgrade, as I could coast downhill, put my pedals and 3 and 9 o’clock, and then lift myself off the saddle a bit. After a few miles of this, one of my lights said it finally had enough, and launched itself from the bike and onto the pavement. After I picked up the pieces, I could see that the plastic groove on the bottom of the light had fatigued and broken off. I also removed the good light so that it wouldn’t suffer the same fate.

Then the road started going uphill, and now I actually had to pedal through the bumpiness. That’s when I started thinking that if I had to do 109 miles of this the next day, I would just hang it up in Needles. (Next time I’ll listen to Lon of his Route 66 Pac Tours when he says to use 32 or wider tires!) Then, as if almost on cue, the pavement got a little better – not great, but on par with the rest of the route.

After passing Cool Springs, the road got real narrow and started to switchback its way up. Posted speeds for the turns were usually 10 or 15 mph. Traffic was fairly light – a few motorcyclists and some snowbirds too, neither of which were in a hurry. The views down to the desert floor were stunning. 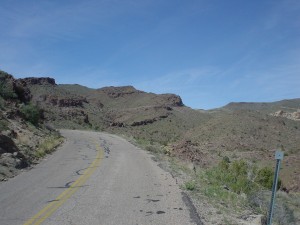 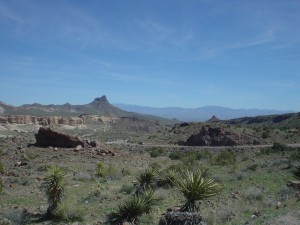 After summiting at Sitgreaves Pass at 3550 feet, it was more switchbacks and mostly downhill to Oatman at 2700 feet. Of course, I started to get a headwind after cresting the pass, and combined with the switchbacks and pavement quality, it meant that this isn’t the kind of hill where you let it all go. As a result, I stopped a few times to make sure the brakes didn’t overheat the rims (I have caliper brakes on this bike, not V-brakes) – they were warm to the touch but OK. 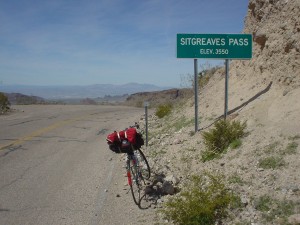 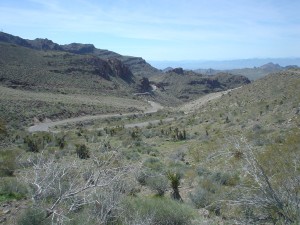 Finally, I reached Oatman, which looked like it was out of the old west. As I turned a corner towards the downtown, there was a traffic jam! About every hour or half hour, the locals just stop traffic and have a mock gunfight in the middle of the road! Tourists stood in the middle of the road watching, and the motorists had turned off their engines. Then they clear out, everyone starts their engines, and everything gets moving again! 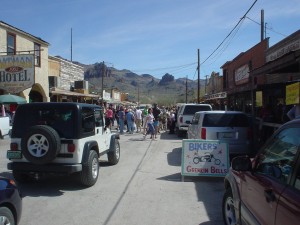 Oatman was packed with tourists (mostly snowbirds) walking around town, and I was lucky to find the last table in the restaurant at 2 PM! I briefly chatted with a Dutch couple that were surprised that I climbed the hill all the way from Kingman!

After leaving Oatman, it seemed that most of the traffic split off to the right towards Bullhead City, while I stayed on Route 66 for the 20 or so miles towards Golden Shores. It was a nice, mostly downhill section, where I could alternate between soft pedaling and coasting, while averaging about 20 mph in the process. Temperatures had warmed up to about 80 degrees or so – but apparently still a lot cooler than in LA, believe it or not! 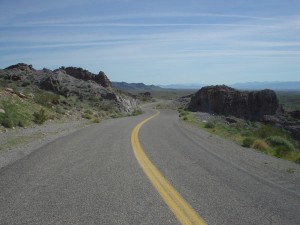 The next order of business was crossing the Colorado River into California. To save some mileage, I opted to avoid the “pure” Route 66 routing, which would have been to continue south to Topock and cross the river on I-40, continuing on I-40 for 6 miles before taking US 95 into Needles. Instead, I headed northwest/west on County Roads 1/227 (also marked as Arizona 95 on some maps), and then across a small bridge into Needles.

I then had to decide where to stay overnight. Route 66 through the old downtown is four lanes with no traffic, and most of the businesses were empty. Nowadays, all of the services are up the hill, clustered around the four I-40 exits. I had a choice of either staying near the restaurants or the supermarket. I opted for the latter, since I needed to get supplies for the long 109 mile day with no reliable services. 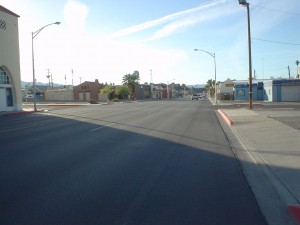 It was interesting talking with the innkeeper at the motel near the supermarket. He was a civil engineer that lived and worked not too far from me, and he showed up to work one day to find out that he was being let go immediately due to the economic downturn. It sounded like he saw the writing on the wall and had worked out a backup plan. He’s been making some improvements to the property – it’s no Hilton, but it’s much better than the Motel 6 for the same $35 price!

Unfortunately, staying near the supermarket meant that the only dinner choices were fast food Mexican (which wouldn’t have sat well with me), or Domino’s Pizza (I had Pizza Hut last night). I opted for the latter, resulting in the second 12″ pizza completely consumed in as many days.

Then I got some sandwiches made at the supermarket, got some water and other food for tomorrow, and some duct tape and zip ties, which were then used to fix the broken headlight. My average pace has been 10 mph including stops, and so on that basis 109 mile would be 11 hours. Since there’s about 12 hours of daylight this time of year, I need to have working light just in case I’m delayed by a mechanical or other reason. More on that subject tomorrow…