Yesterday I alluded to my concern that I would not be able to ride the distance in the available daylight. I didn’t want to start at sunrise and put myself in a position where I would have to do the night riding at the end when I may be more fatigued. Instead, the plan was to get an hour or two of riding before sunrise, so that I could be assured of finishing in daylight. This had several advantages, the two major ones being that the first miles out of Needles were uphill (easier to ride in darkness when you’re going slow), as well as the ability to simply stop and wait for daylight for a Plan B if I had problems with the light repair.

So I set my alarm for 4AM, and although I was a little slow rolling out of the hotel and over to Denny’s, I was on the road before 5:30AM (sunrise is about 6:45AM). The plan worked beautifully. All of the night time riding was on the back streets of Needles and then the uphill climb on the I-40 shoulder (I was visible enough, as trucks were changing lanes even though they didn’t need to). Meanwhile, the headlight repair held together, and although I still had another fully functioning headlight, having two was better than one. I reached the exit for US95 pretty much around the time it got bright enough to no longer need the lights. 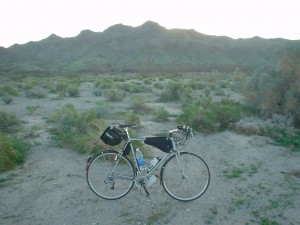 After about 6 miles of rolling but mostly up on US95, it was a left turn onto Goffs Road section of Route 66. It was already warm enough to take off the jacket and the leg warmers. I also noticed the front tire was going soft, there were two thorns that had lodged themselves in the tire so that they are hard to see from the outside, but you can feel a pinprick on the inside. As I was fixing the flat, some guys in a BNSF truck (the rail line is parallel to the route) stopped and we chatted, and they offered me a couple of small water bottles. Despite having put three bottle cages on the bike, one of them designed to hold a 1.5 liter bottle, I was not about to turn down free water on this stretch with very few services! 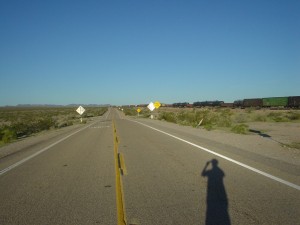 Forward progress felt very slow on Goffs Road. I had recalled that the first letter of the old town names along this section of Route 66 were in order from A-H, or westbound that would be H-A. These were the water and supply stops back when a trek across the Mojave Desert would take a couple of days – of course, modern car technology and I-40 have changed things quite a bit. I saw a sign for Homer next to the tracks, there were no old buildings there and it doesn’t even appear on my map. 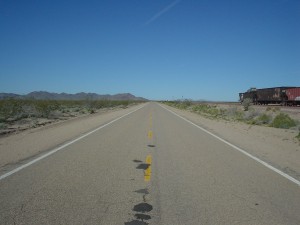 Finally I reached Goffs and saw a sign with “population 23” – but more importantly, “elevation 2500 feet” – which confirmed why progress was a bit slow after starting a few hundred feet above sea level. I remember reading that, at one time, Goffs was a summertime retreat for those in the Needles area to get away from the heat. Well, based on the “rule” of four degrees cooler for every 1000 feet, it would only be 105 in Goffs when it was 115 in Needles. I guess that would have been a big deal in the days before air conditioning! 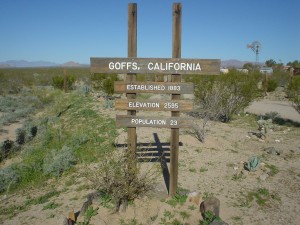 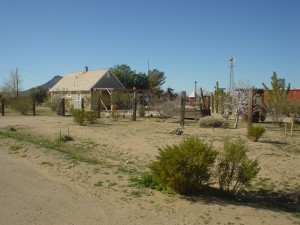 The next 10 miles to Fenner was a nice downhill where all I had to do was soft pedal to maintain a 20 mph pace. So while I felt a little behind when in Goffs, I was 40 miles in at Fenner at about 10:30 AM. I had previously decided that around the 40 mile point (i.e., a little less than halfway), I’d reconfirm whether to press on to Ludlow or turn back to Needles. Since I had 8 hours of daylight for the remaining 70 miles, and my average “touring” pace is 10 mph including stops, I knew I could press on.

Since Fenner just happens to be where the route crosses I-40, there is an expensive store that is the gas station, general store, and cafe. So rather than dig into my bag for one of my sandwiches, I got a stack of pancakes and reloaded on water.

After crossing the interstate, I returned to the land that time forgot. Traffic continued to be virtually non-existent (about five cars an hour – if that) as I passed through Essex. There appeared to be a few people who lived here, but no services were available. 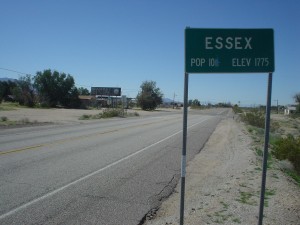 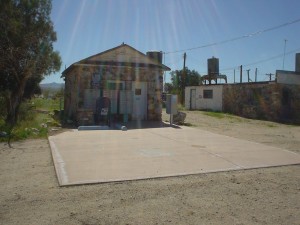 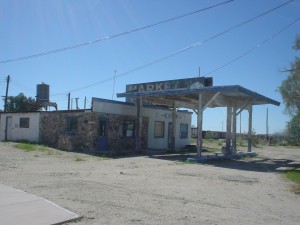 Then the road started going slightly uphill and I could see some mountains in the distance. Would the road go around the mountains or over them? After a lot of time spent climbing (including passing by Danby Road, the former “D” town), the grade steepened and it was evident that the road would go over the mountains. Graffitied foundations for the old buildings were at Cadiz Summit, which I found out later was at 1300 feet, although it seemed higher. 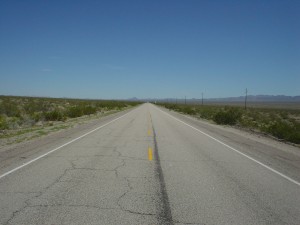 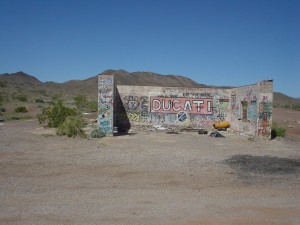 It was downhill to Chambless, where handful of people lived, but there were also no services. Then the road started going up again towards Amboy (I don’t recall a “B” town). The road is a straight line on the map, which in practical terms means there are several short but relatively steep pitches. 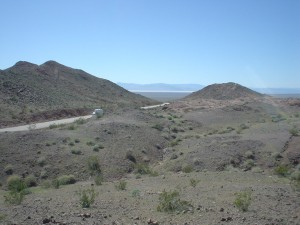 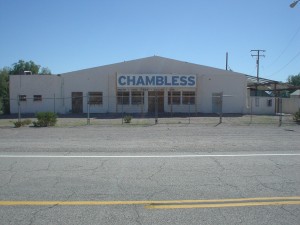 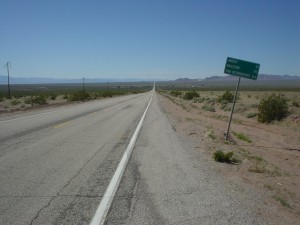 The infamous Roy’s Motel and Cafe in Amboy was open, but only for snacks and drinks – I got a frozen candy bar and a cold soda for a change of pace. I was OK on water and didn’t get any more. Roy’s was at mile 84 and therefore were the first services I recall since Fenner at mile 40. There were a couple of tourists and a couple of locals here, I spent some time talking with both. It looked like the locals were helping with improving the place, one question I overheard was “what do you think about this thermometer above the door?” 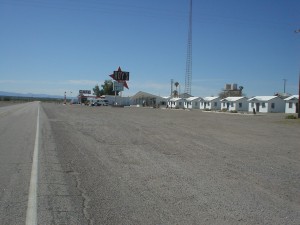 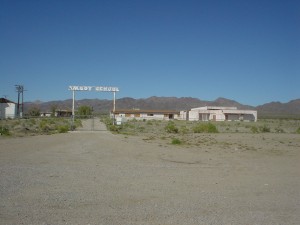 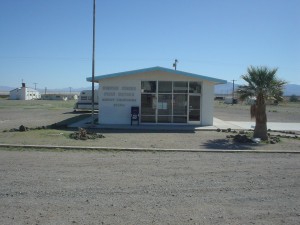 I didn’t make it out of Amboy until about 3:30, and I had about 30 miles to go until Ludlow, with the potential of cutting it too close to sundown. By now, the traffic was almost next to nothing, I can count the number of cars that passed me with one hand. I did see two groups of two road bicyclists going the other way. The latter group had what appeared to be a small rented RV behind them, perhaps they were racers from snow country that came to a warmer place to train?

After a few miles it became apparent that I’d be climbing my way out of Amboy to get to Ludlow. I had to avoid the temptation of pushing too hard and not bothering having any food since I was coming down the home stretch. I know from experience because I had bonked at mile 95 of a century ride and didn’t want to fall into that trap here!

Finally I could see I-40, and after hitting a summit, it was about five miles of downhill on smooth pavement into Ludlow, arriving a little after 5:30PM. There’s not much here – there’s the motel (where you have to check in across the street at the Chevron), a few gas stations, a cafe that closes at 6PM, and a Dairy Queen inside one of the gas stations that is open until 8PM. So it was Dairy Queen for dinner for me – ugh, but better than nothing! The motel room is OK, but it cost $46 for the same room that would be $25 in Barstow or Needles.