After yesterday’s long day, the plan was to sleep in today, have a relatively mellow ride back to the car, and drive back home early afternoon. Oh, the best laid plans!

The portions of Route 66 for all of today’s route are now the frontage roads for I-40. The weather was pleasant when leaving the motel room a little before 9AM. I went under I-40 and caught the frontage road on the north side. It started going uphill – no surprise, since the whole day would be a gradual uphill to Barstow. 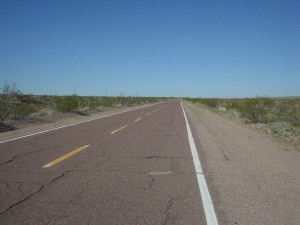 Also, the pavement was about par for the source, not silky smooth, but not too rough either. But with hills to the north and hills to the south, it created a wind tunnel with a strong headwind! So the first ten miles or so were a slow grind, but with only 55 miles for the day I could go at this pace for the whole ride and do just fine. 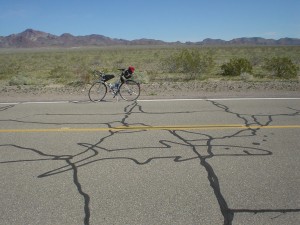 Then things started to get interesting after the frontage road went over to the south side of the freeway. I had been wondering why I only saw one car on this stretch for the first 15 miles or so after leaving Ludlow, but now I saw why. The pavement suddenly looked like it went through a war, with many huge cracks in the direction of travel that could swallow up my buddy John’s 38mm wide tires! This section was the worst of the trip, much worse than the short section between Kingman and Oatman that I had complained about a couple of days ago. 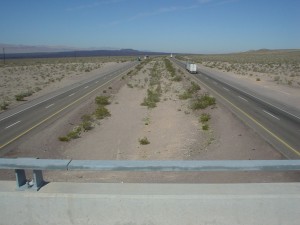 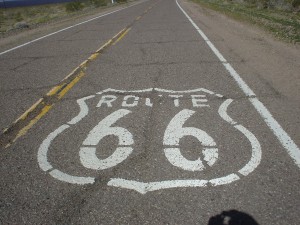 Needless to say, progress was slow. I had let a little bit of air out of the tires to help with the rough stuff. Not too long after that, my back tire went flat quickly. I couldn’t find the puncture in the tube, nor could I find any thorns in the tire. So I figured it must have been a pinch flat, so I just changed the tube and pumped it up to the normal pressure.

After riding on the repair for a little bit, I saw entrance/exit ramps for I-40, the first ones in the 18 miles since Ludlow. The frontage road ahead looked like it wasn’t getting any better, so I figured the I-40 shoulder would be a better ride and went to take a look at the signage on the westbound entrance ramp. When I went under the freeway to go look at the ramp – bam! – yet again, the rear tire went completely flat.

I figured at that point there must have been a cut which went all the way through the tire – one that would only show itself if there was a tube inflated to pressure, thereby leaving enough of the tube exposed to air so that it would pop like a balloon. Since I was now on my last tube, I thought it prudent to also get out my spare folding tire, and change both the tube and the tire.

I took a look at the I-40 onramp signage, and Caltrans in their infinite wisdom must have considered the frontage road to be a “suitable alternate” route for bicyclists, as the I-40 shoulder was posted “no bikes”. Yet it was clear that the county hasn’t spent a dime on maintenance of the frontage road, because after all, no one lives on this part of the frontage road and so everybody uses the freeway. In practical terms, I had used up all of my spare tubes and tires, and if I were to have another mechanical issue on the frontage road, there would likely be no one driving by to flag down for help. So the freeway shoulder it was.

After a smooth, quick 9 miles on the I-40 shoulder, the first of two exits for Newberry Springs came up. Thinking about lunch, I exited since I saw a sign for a truck stop, but I decided to continue on because it looked like a glorified minimart.

I went to investigate the frontage road, because I figured it would be better maintained now that I was somewhere closer to civilization. That indeed was the case, and I quickly came upon the Bagdad Cafe, from the German movie of the same name. Just then a tour bus load of Dutch tourists pulled up and poured inside the little cafe, looking around and taking pictures. I was able to get a seat at the counter and order before things got too crazy inside. 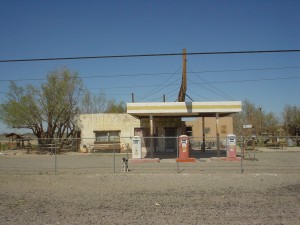 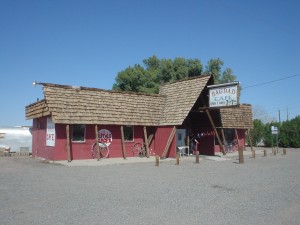 Then the tour bus left and it was just me eating and a couple of locals hanging out. We talked about a bunch of stuff – I’ll have to eventually update this blog post sometime with more about that. 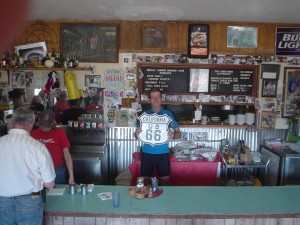 Another tour bus pulled up, and so I figured that would be a good time to leave. Then another two buses pulled up! I guess the Europeans going to the Bagdad Cafe in the US is the equivalent of Americans going to the “Sound of Music” tour in Austria! 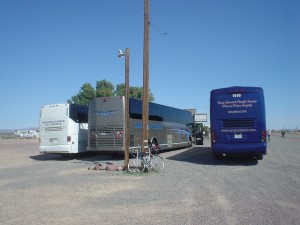 After my first few pedal strokes outside of the cafe, I noticed the front tire was a bit soft. I clearly had a slow leak, but it was slow enough to pump up every once in a while (since I was out of new tubes). That strategy worked fine, until one time about eight miles later I connected the pump, pulled the locking lever, and then I lost all the air in the tire. The rubber on the tube had ripped right where the valve stem connects, which is not repairable. Argh! So I looked at the old tubes to see which one I could patch. I never did find the leak in yesterday’s tube, so I put that one in as a replacement and miraculously it worked fine! It was still a slow leak, but actually a slower leak than the tube it replaced!

I then came upon a detour sign, since a bridge was out up ahead. I wasn’t sure it would be better to follow the detour or just use the I-40 shoulder, but a nice lady in a pickup pulled up and said that the detour is just a parallel road on the other side of the tracks and would get me to where I was going. This was a blessing in disguise for two reasons. First was a work related reason, as I got to pass right by the Coolwater plant, which was used for coal gasification tests years ago, although nowadays it generates power from natural gas. (I still recall one of our clients saying “I don’t want to hear RR say ‘We did that on Coolwater’ again!”) Second, as it was getting closer to the end of the day, the headwinds were picking up, so progress slowed even more, and I had run out of water. The detour route passed me right by the market in Daggett, which I may have missed if I were on the old Route 66.

A marine base currently sitting on the old Route 66 alignment forces a short detour on the I-40 shoulder. This has been the case for years, with bicyclists exiting at East Main Street into Barstow, as shown on the latest officially published Caltrans map in 1991. However, there was now another exit in between – not shown on my AAA map which shows all of the exits – and a sign directing bicyclists to exit. Therefore, there was presumably an alternate surface street route, but all I could see was a frontage road that didn’t show up on my AAA county map and outside the detail of the Barstow city inset of another AAA map. (I would later find out that this frontage road looped around to East Main Street, but that was not obvious as the time.) So I got back on the freeway, with ancient Caltrans map in hand, and made it to East Main Street with no problems.

Finally, after even more headwinds and more uphill through Barstow, I arrived at the train station just before 6:30PM, where my car was parked, where the tour came to an end. Within the next couple of days I will likely do one more post and add photos to the previous posts. Bye for now! 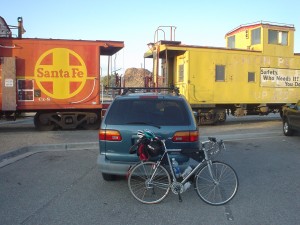