Regular readers of this space know I’m not a big TV watcher. In fact, when I was home alone for a week, the TV didn’t even get turned on once!  So I’ve been able to keep my TV/landline/internet monthly payments to a minimum. At home the network channels come in crystal clear with a digital TV antenna, so we pay about $55/month for landline/internet.  Over the air TV reception is impossible at our mountain rental cabin, but we only pay $11/month for network channels and a few others through an unadvertised Dish network package. But the bigger cost savings (as described in a previous post) is the $15/month for DSL without needing to get landline service!

However, we do rent movies from time to time, especially for our young child, and we were growing frustrated with the increased fees and hassle from Blockbuster. When it came time to replace the aging TV in the den at the cabin, that set the wheels in motion. Blu-ray player prices had come down quite considerably, and almost all of the players were compatible with a wired and/or a wireless internet connection.  Since an internet connection is one thing we don’t skimp on, moving towards that means of media distribution made the most sense for us. So we bought an Insignia (Best Buy brand) player for the cabin for $130 and a LG BD550 player for home for $140 – not so much with the idea of being able to play Blu-ray discs, but to download movies from Netflix.

The Netflix setup was rather easy – from a computer I set up an unlimited account for $9/month and registered both receivers. A decent selection of movies is available by browsing from the receiver, but many more can be found from a computer and added to the “instant queue”. The downside is that they tend not to have new releases, but for childrens’ movies that’s quite alright, and many of the two year old movies are new to us.  We’ve been rather happy with Netflix so far.

The Blu-ray/network players themselves have also worked out quite well.  We bought wired models to keep the price down (and for a faster, more reliable connection), as similarly equipped wireless units cost about $100 more.  It was possible, though a bit of a challenge, to get a wired connection to the players, as shown in the photos below. 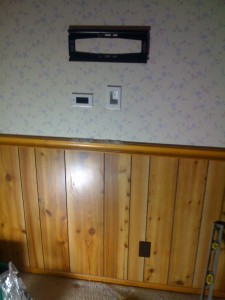 TV is now mounted on the wall. The cables have been fished down the wall and out an opening at the bottom.  The ethernet (network) cable will be run in the crawl space below, then up into the wall and out the opening with the other cables. 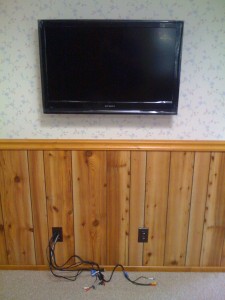 Lots of cables, might as well plug them all in now, so I don’t have to take down the TV later! 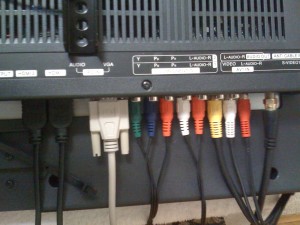 Finished! The Blu-ray player is under the printer/scanner on the left. 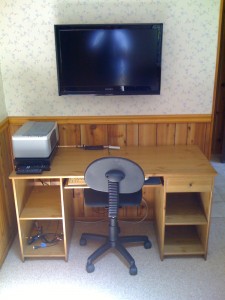 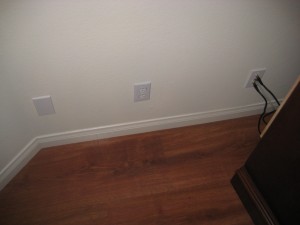 Luckily there is a closet on the back side of the wall with the receptacle, so that’s how I made it through that stud.  (Repairing the drywall is a project for the Mrs.!) 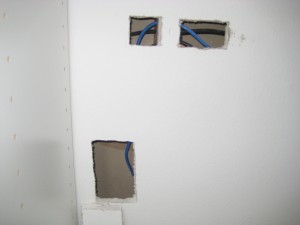 I removed the air intake grill for the heater/AC so I could crawl under the stairs and fish the wire through to the garage. 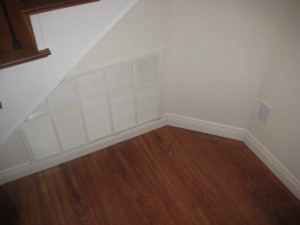 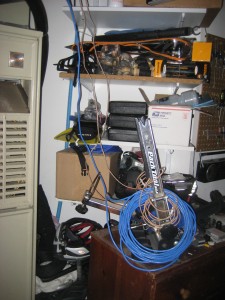 I moved the router from its original location upstairs, down to its new location in the garage by the DSL modem. Putting a $15 switch in the original location of the router made life easy by not requiring messing around with existing wiring. Once I get the ethernet cable over here, I’ll plug it straight into the router. 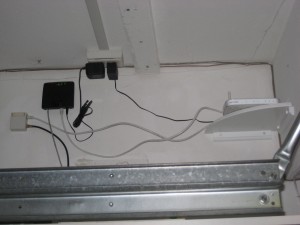