This new project all started when I bought an internet capable Blu-ray player for the downstairs TV.  Rather than get a player with a wireless internet connection, I saved money by getting one with a wired connection.

So how to get the ethernet cable to the player? My DSL modem is in the garage, and I have a network cable going upstairs to my wireless router.  Running a new wire from the upstairs router to the player would have meant too many holes in the walls. 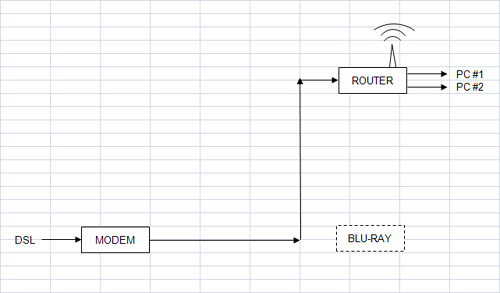 So the first idea was to move the wireless router to the the garage, putting a $15 switch in place of the router, giving an easier route for an ethernet cable (as described in my previous blog post) from the router to the player. 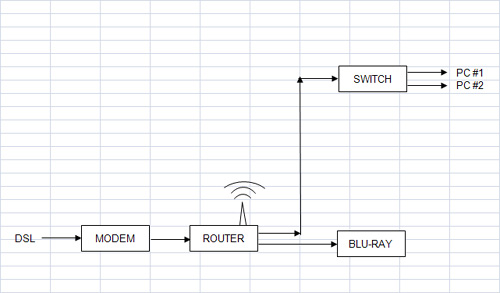 The problem with this setup was that the wireless signal strength dropped quite considerably. The connection was very weak – I could only establish a wifi connection on my iPhone while in the garage, with the connection dropping out when walking around the rest of the house.  The three reasons for the weak connection were the downstairs location of the router (wireless routers have a better range upstairs), the placement at the edge of the house (instead of the middle), and the garage support beam that got in the way of the antenna.

The next step was to try to upgrade the antenna. The Netgear WGR614v9 router did not have a removable antenna, so I ripped it out and soldered a new one directly to the circuit board. That didn’t help, so I decided the best solution would be to leave the router downstairs and add a wireless access point upstairs.  But it turns out a second router is cheaper than a wireless access point.  I bought another WGR614 (though it’s now on v10) and put it upstairs, with the following configuration. 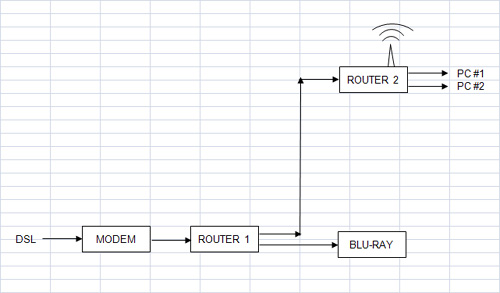 If you’re familiar with setting up a single router, it’s not that much harder to set up two in series. Exact instructions can be found on the web. But the basic concept is this: disable DHCP on the second router, and connect the cable from a LAN port on the first router to a LAN (not the WAN) port on the second router. This way, the second router is no longer acting as a router – it is now essentially a switch with wireless capability.

One capability on the WGR614v10 that is not on the v9 is the capability to set up a guest wireless network. So I have the main wireless network with access to the internet, printers, and the other computers, with the separate guest network  setup for internet access only.

Now onto the cabin. While I haven’t had any problems connecting wirelessly from laptops or notebooks, but I’ve been having wifi signal strength issues when connecting with the iPhone.  Much of the issue is due to the router being optimally placed to pickup the wifi signal from the webcams on the garage, not for signal coverage in the cabin.  So I bought a Netgear WPN824N – which appears to be the N-compatible successor to the WGR614 – and plan to set it up in a similar manner as the one at home. Actually, I will then have three wireless networks: a “G” network from the first router to connect to the webcams, as well as main and guest “N” networks from the second router.  We’ll see how it works out the next time I make it up there!