TL;DR: A Kenmore dryer pedestal I bought at a Sears Outlet store didn’t come with the mounting hardware, and (unlike any other part) it was not possible to get the hardware from the Sears Parts Department, so I had to buy a new pedestal (and return the old) to get the hardware. I was hoping that the higher levels of Sears Customer Service realized they have a problem and fix it so that it’s not an issue for others in the future, but that has not happened. Later, someone (who commented before I disabled comments site wide) was able to get a hold of a part number, and I quote them: “We ended up crossing our Kenmore dryer to an LG unit. For others who may find themselves in the same unfortunate position the part number for the retainer clips is AAA30793426. The kit includes 4 clips, a wrench, and instructions. I ordered mine through Sears Parts Direct for just under $22, but they are also available at mcmelectronics.com (an LG parts distributor). Neither supplier provides much in the way of a description, but the clips are identical to the one in your picture, and fit my Kenmore dryer perfectly.

Normally, I’ve found getting parts for Sears appliances to be real easy, as they have schematics with parts numbers on the internet for even the oldest models.  Yet I was frustrated trying to find a mounting bracket for a new Kenmore washer and dryer. Here’s the email I just sent to the store manager:

My wife bought a washer and dryer at the BBBB Sears Outlet store (and arranged to have them delivered), but they didn’t have any matching pedestals there, so she found them at your OOOO Sears Outlet store (and took them home). The washer and dryer were delivered today, but they couldn’t install them because the retaining brackets (which allow the washer/dryer to be attached to the pedestals) were missing. We looked inside the pedestal drawers found the attachment screws, but no retainers.

Anyway, we’re getting frustrated running around in circles and would appreciate whatever you could do to help point us in the right direction.

First, let me backtrack a bit and show some photos of the problem.  Here’s the front left side of the pedestal, notice the circled area: 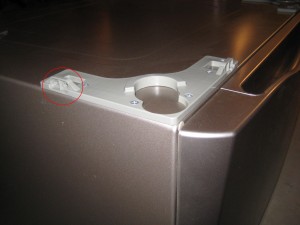 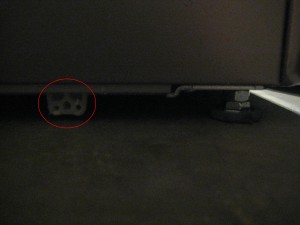 I double checked the Sears Parts website – the retainers are shown on neither the dryer nor the pedestal diagrams!

In addition to the email, my wife had called the OOOO Sears Outlet store.  They called us back and said they had the parts we needed. We drove the 35 miles there, only to find out that they had what appeared to be rubber pads that replaced the dryer legs so that the dryer could “sit” on top of the pedestal.  That sounds like what may have been the standard for an older model, but I would prefer to have the dryer attached to the pedestal, as it should be.

So we stopped by the BBBB Sears Outlet store on the way back home, and the good news was that I found these, which they let me take home: 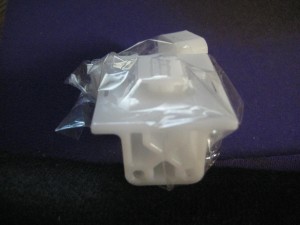 I confirmed they slide into the slot in the photo below. 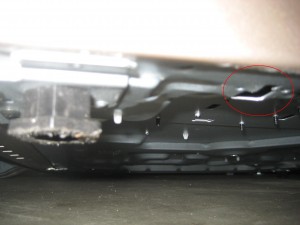 But the bad news is that they only had two of the required four.

The next day I went to the remaining two of the five Sears Outlet stores within a 30 mile radius to find two more retainers. I struck out both times.  So I finally had to get (order, actually, because they don’t stock them) a new pedestal at Sears, which should arrive in a couple of days.  I probably should have bought a new pedestal in the beginning, because the savings from getting the cheaper pedestals at the outlet has evaporated in the driving time and gas money hunting down the retainers.

UPDATE: Through the power of social media, this blog post caught the attention of the corporate level of Sears customer service, who contacted me, and a satisfactory solution was worked out (like the lawyers say, I’m not free to disclose the terms of the “settlement”).  Furthermore, they realized they had a problem with the system and hopefully they will fix it so that it’s not a problem for others in the future.  But in the short term I recommend spending the extra money for a new pedestal at a regular Sears store (instead of the Sears Outlet) to ensure that it will come with the correct dryer mounting hardware.