My iPhone 3G battery was getting old and wouldn’t hold a charge as well as it used to. Since I’m an engineer, the obvious solution was to take it apart and replace the internal battery myself! While it was apart, replacing the dock assembly (which includes the loudspeaker, dock connector, and microphone) was also in order.

I was pleasantly surprised to find a lot of  tutorials, videos, and diagrams on the web, with the most complete site being DirectFix.  They have parts too, though I got mine on Ebay. I paid about $10 shipped for the battery (and a couple of tools) and $10 shipped for the dock connector, both from US sellers. The tools were the small screwdriver (though my #0 Phillips jewelry screwdriver worked better) and case opener (a definite must). I didn’t get the suction cup for removing the front glass because I already had one at home.

Getting to the battery involves removing the front screen (top left in photo)  and the motherboard (top right in photo). Also in the photos are the old dock connector (middle right), the old battery (bottom left) and the tools (bottom right).  There were two screws to take off the front glass, seven screws to remove the motherboard to get to the battery, and two more screws to remove the dock connector. The connectors were relatively easy to disconnect and reconnect, thanks to the case opener tool. 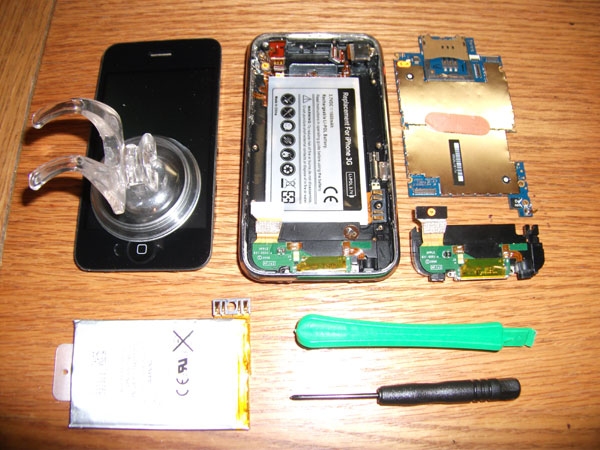 It took me only about 30 minutes to take the phone apart and put it back together again. I was expecting to need to do a full restore after the battery replacement, but as an added bonus, the phone was working just fine afterward!

The only downside of all this was that I unnecessarily paid for a new dock assembly. I thought the “right speaker” was broken because I was only hearing sound out of the left side “grille”. Silly me didn’t realize the left grille was for the sound and the right grille for the microphone! Anyone need a working loudspeaker/dock for the iPhone 3G/3GS?

A couple of days ago, my battery meter dropped to 1%, and yet the phone wouldn’t take a charge. After ruling out charging/sync cables, etc., as causes, I put the old battery back in and the phone worked fine again (well, at least at reduced battery capacity). Clearly the new battery had a defect, and so a replacement new battery is on its way to me free of charge.

But here’s the surprising thing: the standard iPhone battery has a 1150 mAh rating, but some replacement batteries (such as the one I bought) have an advertised 1600 mAh rating. But pull off the sticker and it looks like the same 1150 mAh battery that everyone else sells. At least I didn’t pay any more for the “privilege”! (Though it still could have been an old battery from a returned or refurbished phone, yikes!) 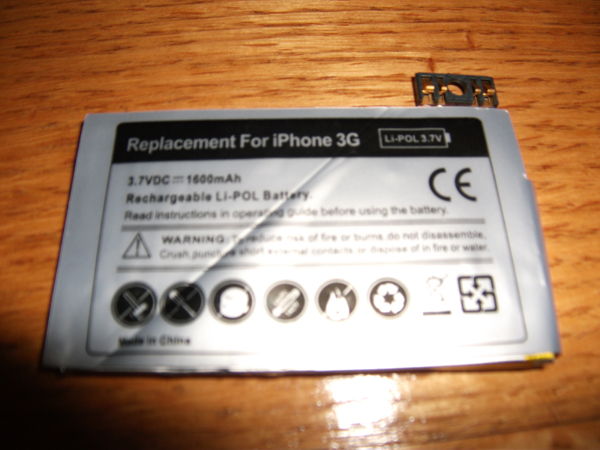 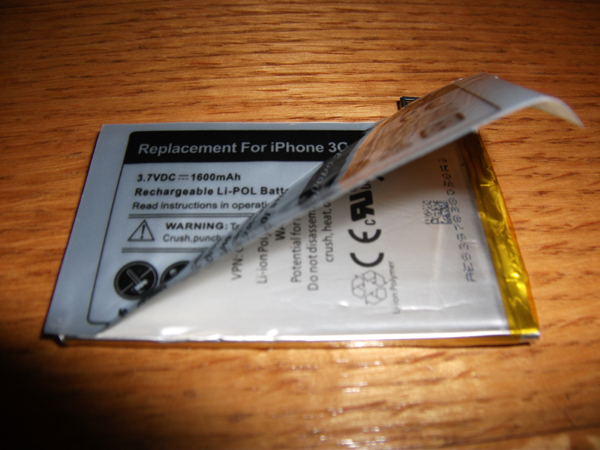 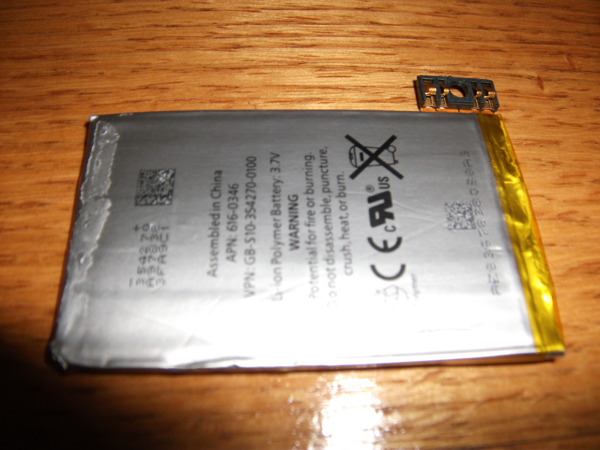