We had a decent climb right out of the gate this morning heading out of Riverside. We got a little bit of that back as a downhill into Moreno Valley, but not much. 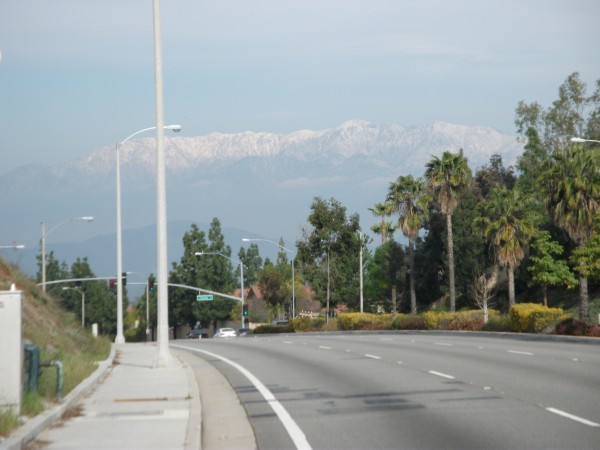 After crossing I-215, it really started to feel like we were “touring”, rather just riding in the endless Los Angeles suburbia. Good thing we stopped at the “Easter Market” on the east side of the town, as it would be the last services for a while. 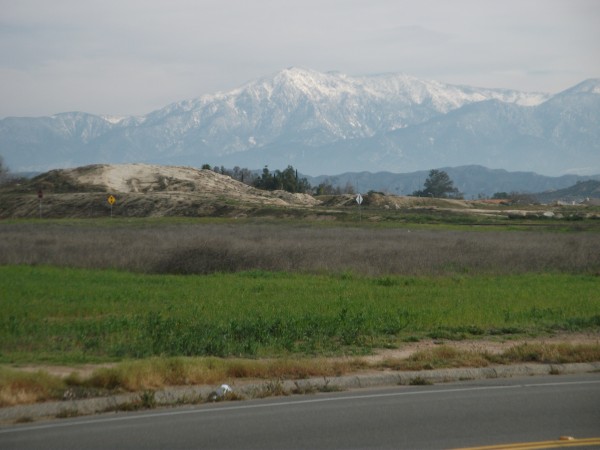 From Allesandro, we headed onto Gilman Springs, and then made the turn to Jack Rabbit Trail. The sign said “no through traffic”, but no real choice except to continue with no alternate route in the area. I knew to expect bad pavement, and I figured that if were used on a century ride frequented by road bikes with skinny tires, then it would be no problem for my touring bike. That was indeed the case, but with one problem – this time of year there were a couple of water/mud crossings. Luckily we were able to walk around them, at the cost of mudding up the cleats. 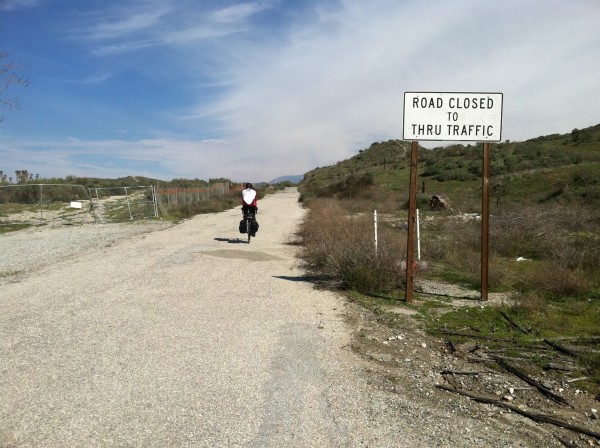 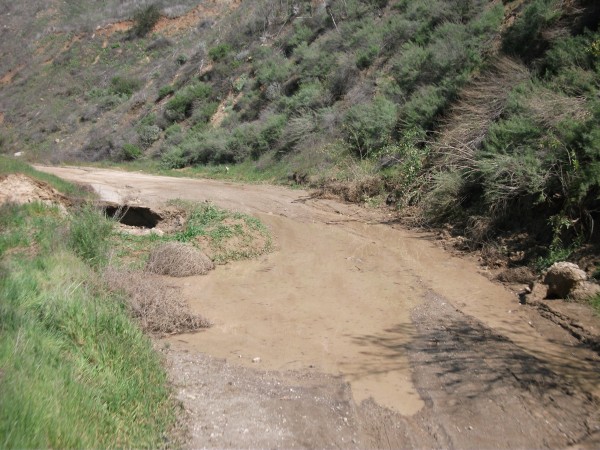 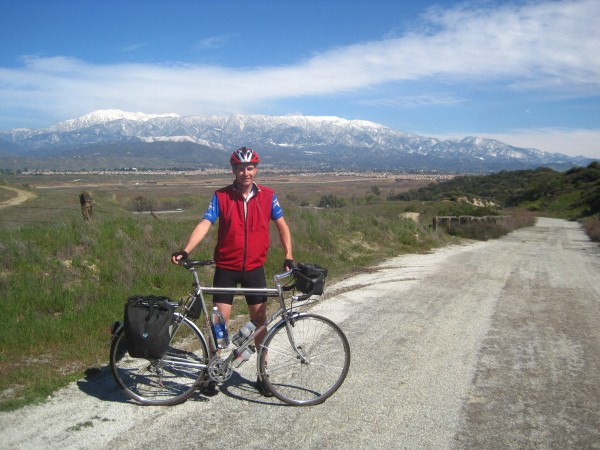 From there we flew on the slight downhill through Beaumont, Banning, and Cabazon, unlike the time on a previous AYH ride in the reverse direction into a stiff headwind. 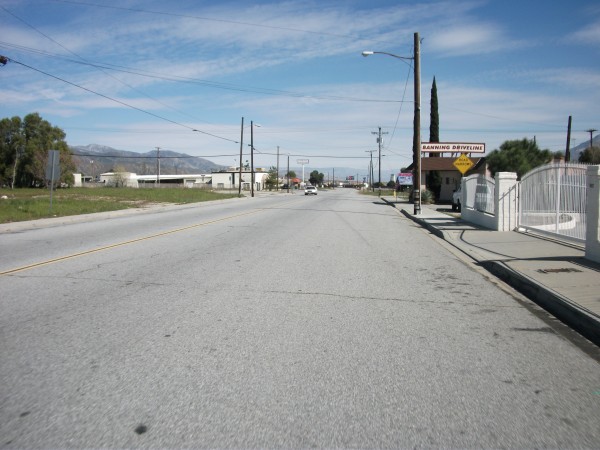 We got to the end of the frontage road at the east end of Cabazon and at the point where we would have to literally enter I-10 and then immediately exit at CA-111 towards Palm Springs. This ramp did not have a “no bikes” sign on it and therefore that freeway shoulder was legal to use (often the case when there is no alternate route). There was a CHP parked on the on-ramp, and if what the Caltrans Public Affairs person told me were true (see a previous blog post), then the CHP would have stopped me and asked for my “enroachment permit”. As I expected, that was indeed not the case as we rode up the onramp and right down the offramp. 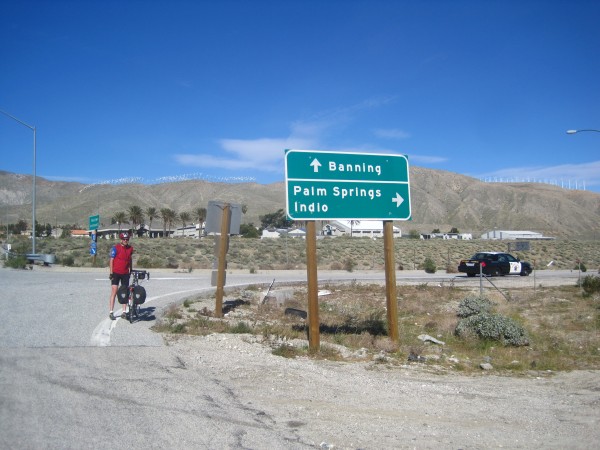 There were two other places where cyclists have traditionally been able to use a specific ramp/freeway shoulder for a short distance to bridge a gap, but Caltrans signage has now prohibited that. More on that in a blog post after the trip.

The headwinds started picking up as we headed on the 10 miles of CA-111 towards Palm Springs. Fortunately, it was still downhill all the way into town, with the winds tapering off as we got closer. 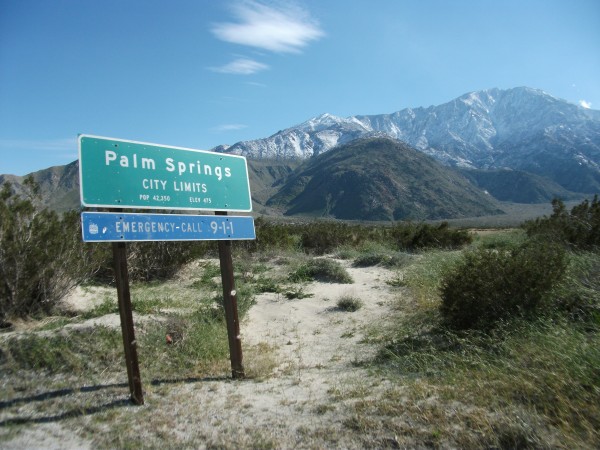 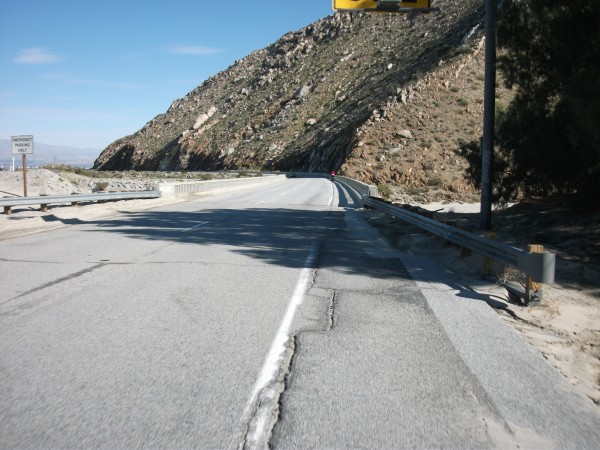