After stopping at a Subway to get sandwiches for the road, Richard shuttled us back out from Palm Springs to Chiriaco Summit. I thought Chiriaco was an Indian name, but according to a placard there, it’s the name of the family from the south whose descendants still own and operate the establishments there. We took a few last photos (and I got a couple of the Patton museum) and we were on our way. 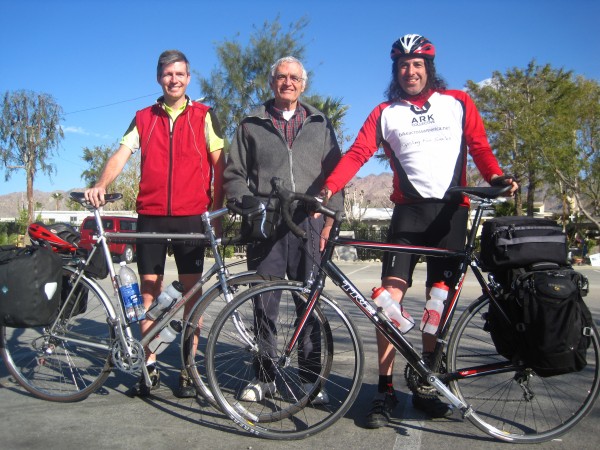 Most of the day was slightly downhill, but with some headwinds, on the I-10 shoulder. That may sound scary to the average person, but the shoulder was wide and clean, and we could easily be far enough right to avoid the wind blast from trucks. The biggest hazard is crossing the interstate off ramps when there’s heavy fast traffic, since it’s hard to see when drivers want to exit. In rural areas such as this, ramps are few and it’s easy to time the ramp crossing when there’s no traffic in the right lane. 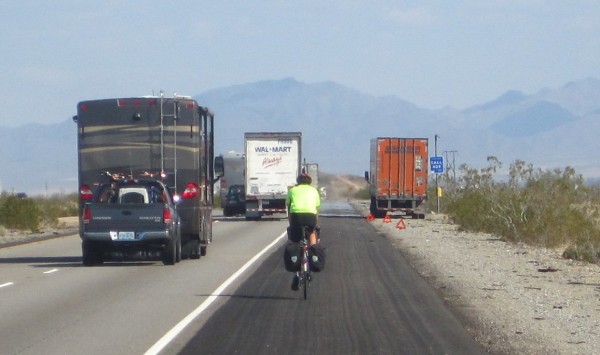 After a nice downhill run, we approached the exit for Desert Center. This is the kind of place where I’ve never taken my foot off the gas and kept going full speed ahead, but it’s a different story on a bike, so we exited. Due to the palm trees with the tops cut off, it was obvious that this was a little more of a town at one time, but I was surprised that there was a functioning cafe and a market with a post office window. I made a mental note that this could be a place for bicycle tourists with camping gear to pitch a tent, and then we continued on. 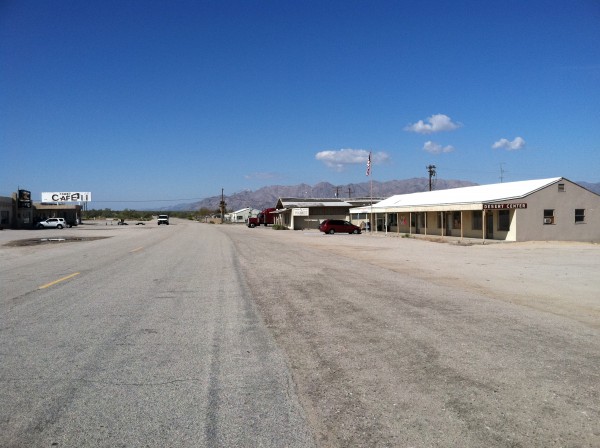 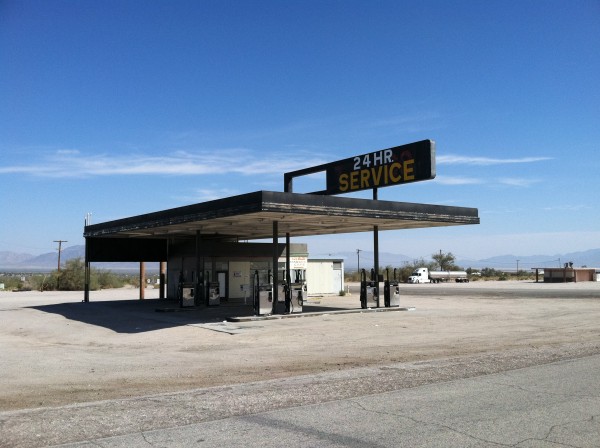 The 16 mile stretch of Chuckwalla Road seemed like a reasonable alternative to 15 miles of I-10, with what I’m told to be about an average of 10 vehicles per day traveled. But I was looking for a Chuckwalla Road exit rather than the Corn Springs Road exit and missed that opportunity.

The previously smooth shoulder pavement then gave way (literally?) to perpendicular cracks which gave an annoying “thump thump” when riding. Steve wanted to blame the engineers for the regularity of the cracks, but I assured him that it was simply due to the thermal expansion and contraction properties of the asphalt. Finally, we got a break from the cracks when we reached the outskirts of Blythe and were able to exit I-10 and continue on back streets. 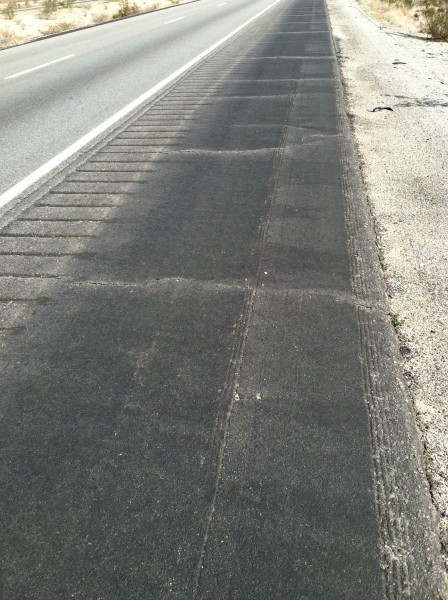 Blythe would really have been the “best” place to stay for the night, since it had the most hotels, places to eat, and it was the departure point for the bus ride home. But on his last cross USA ride, Steve was stuck in Blythe for two days waiting for a replacement for a broken derailleur! (There’s a lawnmower shop in town that doubles as the bike shop.) So we had to cross the Colorado River into Arizona!

First order of business was to find where the buses leave from Blythe, the Greyhound website said 400 Lovekin but didn’t say north or south – it was indeed the USA gas station and convenient store on 400 S Lovekin. Steve was itching to get across the state line and just wanted to hop on the I-10 shoulder, but I suggested it would be better that we take the same route that I would need to take to ride back to the bus depot early the next morning.

When we got to the point of figuring out how to get onto the bridge to cross the Colorado River, we saw a few cyclists on I-10 wearing matching team jerseys (not carrying their stuff on their bikes!) with a matching support vehicle behind them on the shoulder! They waved to us, and I wondered for a moment about where they would be staying in Ehrenberg, but then figured that because they had a support car, they were likely riding from Indio, CA to Quartzite, AZ, 20 miles further out. 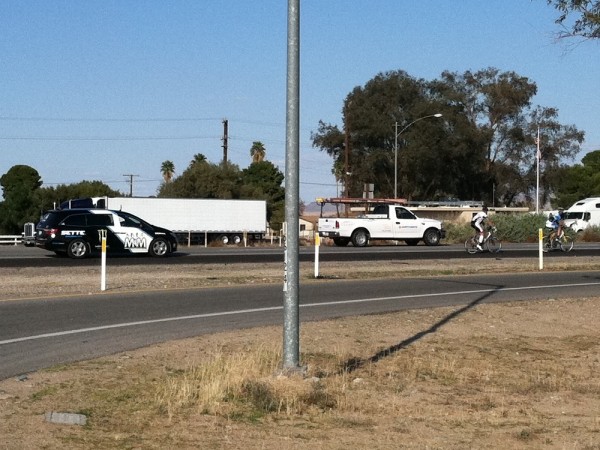 We were about to hop on I-10 at the last entrance, but then got distracted by the “pedestrian crossing” sign. So we looped around to the north side of the bridge to see a rather narrow walkway (I would later find out that the Arizona side of this walkway was worse). We rode back around to the last entrance ramp, which was posted “no bikes” (even though the shoulder was wide and the Arizona side was legal), and crossed the river into Arizona. 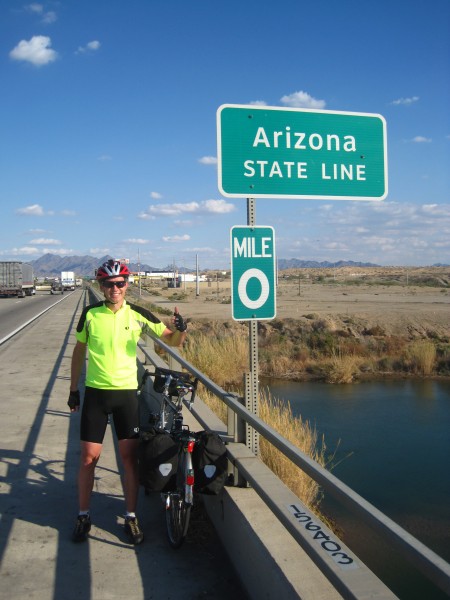 After some photos of the big Arizona welcome sign, we exited at Exit 1 in Ehrenberg. We made it!