The night before I had set my alarm for 5:30AM California time (I had to be really careful to make sure the phone didn’t switch over to Arizona time!) to give myself enough time to ride to Blythe for the 6:40AM Greyhound bus departure. Although it was pitch black when I woke up, I had lights, but it was nice that there was sufficient daylight when I left at 6:00AM.

As I crossed the bridge back into California, all traffic was being diverted to the Agricultural Inspection Station. As I rode through the toll booth type thingy, the attendant couldn’t keep a straight face and was laughing as she was asking me the official question, “are you carrying any fruits, vegetables…” I smiled, laughed, and waved goodbye.

When it came time to board, the Greyhound bus driver said I needed a box, but I told him that they didn’t tell me that when I bought the ticket. Luckily there was enough room to put the bike in the luggage area as-is, without any disassembly.

We had one scheduled stop in Indio, during which the Border Patrol came on board and asked everyone individually if they were US citizens. I decided a more serious “yes, sir” answer to the question was more appropriate!

Although I had an advance purchase ticket with a transfer to Santa Ana, the bus driver made it sound like it would be a crap shoot as far as getting my bike on that bus. The Metrolink commuter train would put me closer to home and a bit earlier, and I knew with 99.9% certainty that I would be able to take my bike on that train. So I rode the short distance to the Metrolink station. Good move, because there was a Subway and a bunch of other food places across the street to use my 1.5 hour layover time. 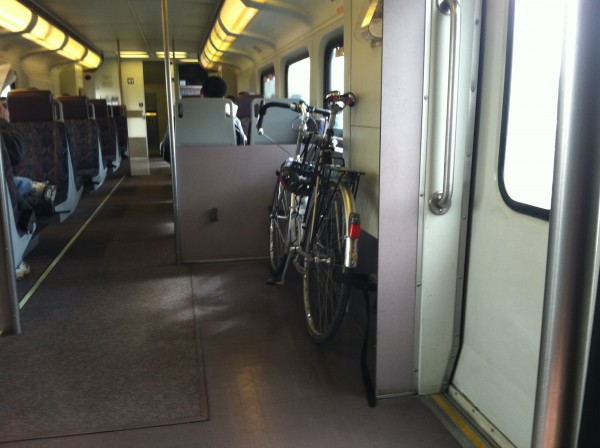 A nice, uneventful ride from the train station to home – though the climb to my house was the steepest part of the trip!

Enough for today. Final tour thoughts in another post.