My new HP Pavilion Elite with Windows 7 has been working great, except for problems with distinguishing between read and unread emails in GMail when using Internet Explorer or Firefox, as well as italicized text being displayed instead of regular text. After doing some research, I found I wasn’t the only one with the GMail problem. Switching to Google Chrome solved the read/unread email problem, but the italicized text still remained.

I could live with the italicized text in the browser, but I wasn’t too happy when I opened a Word file in Arial font and also saw the text italicized. The problem finally came to a head when I installed TurboTax 2011, and then got this screen after trying to run the program. 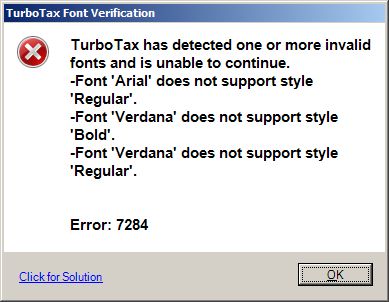 The “click for solution” at the bottom of the window redirected to this web page. The solution was to go to the fonts directory and double click on those fonts to “re-register” them. But oddly enough, the fonts WEREN’T THERE!!!!

Then I found this page, which redirected to this page, giving the solution:

Seems to be something unique to HP’s installation of fonts on Windows 7.

I do setup on a number of computers and have noticed lately that some HP computers were displaying onscreen text in italics. I went through a number of support forums, tried adjusting fonts in Internet Explorer and on the desktop to no avail. I finally had a client that was unable to start a new copy of TurboTax because of missing fonts. Lo and behold, the installation of Windows 7 on his HP computer was missing Arial Regular, Verdana Regular and Verdana Bold.

Solution it to highlight, right click, and “install” the fonts from the following two directories:

Doing the above and rebooting allowed TurboTax to run and fixed the problems with italicized text showing instead of regular text. So what was happening the Arial Regular font couldn’t be found, so then it used Arial Italic as a second choice.  It’s very shocking that a default install of Windows 7 wouldn’t have such a common font such as Arial!