Getting to the start of my upcoming bike trip involves flying the last leg on a small plane, an Embraer 120 (EMB-120) turboprop. Normally I take my bike on the plane so that I can be sure it’s with me when I arrive at my destination.

A former commercial pilot suggested I call the airline to make sure my bike would fit, since it may not if the plane were configured for more passenger seating at the expense of cargo. I called United, and they said there is a size limit of L+W+H of less than 80″. This is even smaller than the “Iron Case” or similar hard shell bike cases where you have to remove both wheels and which measure about 46″ x 30″ x 10″.

On the day of my flight, I could have easily checked in with my bike at my local big city airport, paid the $100 bike fee, and be reasonably assured that during my stopover they wouldn’t pull out a tape measure and just go put the bike on the turboprop. But I heard stories of bikes being the first to get bumped from these smaller planes if they needed to keep the total weight under the maximum allowable. Given that I would lose a day of my trip if this happened, I gave in to the reality that I would need to ship my bike to my destination – something I’ve never had to do at the beginning of a trip.

My first night’s hotel graciously accepted my request to use them as a shipping address, and they even suggested I ship the bike early to make sure it got there on time. But the last time I had shipped a bike, it cost about $160, much more than the $40-$50 I had been used to paying in the past. Not wanting to repeat the same thing I did a little checking with the FedEx and UPS online calculators. Trying a few different box sizes, what I found was that a smaller box would be about $50 to ship, then if it were a little bit bigger, the shipping rate would jump up to $100.

What’s happening here is that shipping rates for larger packages are based on “dimensional weight” rather than actual weight. Here’s a good article, but to make a long story short, the dimensional weight in pounds is equal to LxWxH divided by either 194 or 166. So there seems to be a pricing break point at around 80 pounds of dimensional weight.

For this trip, I found a cardboard bike box which measured 52″ x 31″ x 8″. That came up as $50 to ship using the online calculators, yet if I increased any one of the dimensions by 1″, the price jumped to $100. Either way, it’s no worse than the $100-$200 to take it on the plane. Also, the nice thing about that box is that I am able to fit the bike in without removing the rear wheel or rear rack, which works out well to help protect the bike during shipping and minimizes reassembly.

I won’t go into detail on how to pack the bike into the box, because there’s plenty of other websites with advice on how to do that. Besides, it was easier for me to simply pay $20 to my local bike shop for them to do it for me. After I got it back from the shop, I was able to squeeze a few more things in the box, such as my tent (don’t want to take the tent stakes with the carry-on luggage!), tools, helmet (pretty bulky to carry-on), and a few other items. 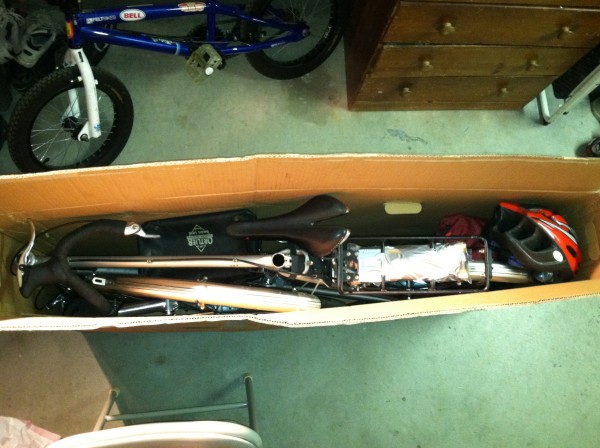 The only downer was that my front tire was completely flat. Uh oh, was it the tire or the tube? Luckily there was room to try to pump up the front tire while keeping it in the box, and I could tell the tube was leaking inside the tire right at the valve stem. (Certainly can’t blame the bike shop for that.) Good news, since that meant I didn’t have to throw another tire in the box, just another tube in there would be fine.

On Sunday I created a FedEx shipment online at home (wife has a discount account from work) and took the boxed bike to the local FedEx Kinko’s that morning. But instead of printing the shipping “label” on my printer, I instead outsmarted myself and selected the option to print a bar code to take with me. Though for some reason they couldn’t get a label to print after scanning the bar code. To make a long story short, this is somewhat of a known issue, and so I had to recreate the shipment online (ugh!) and print the shipping label instead of the bar code.

I was a little nervous since I didn’t see any status updates on the website for over 24 hours. Finally, tonight (late Monday) the shipping confirmation has gone through, showing a planned delivery for Wednesday, well in advance of my planned arrival!