The Curly Redwood Lodge was a nice place to stay for a town like this. Yes, it’s a little dated looking, but it was clean and otherwise OK for a town like this. The owners were really nice, and it was great of them to let me ship my bike there in advance, as it might have been too big to take on the small plane.

Due to tire problems I had to use my folding spare tire even before taking the first pedal stroke on my ride. That was a bit of a concern, since this bike has the older, harder to find 27″ size instead of the newer 700c. Only option would be to go as is and get a spare when I pass through Eureka. 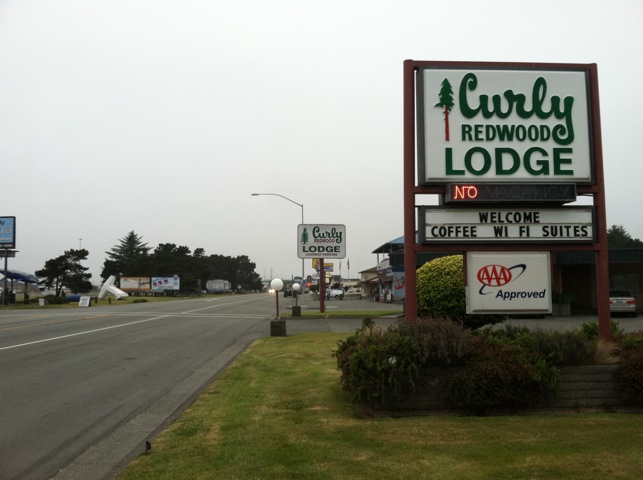 Without any warmup, the route south on US101 immediately starts up with what will be one of the biggest hills on the ride! 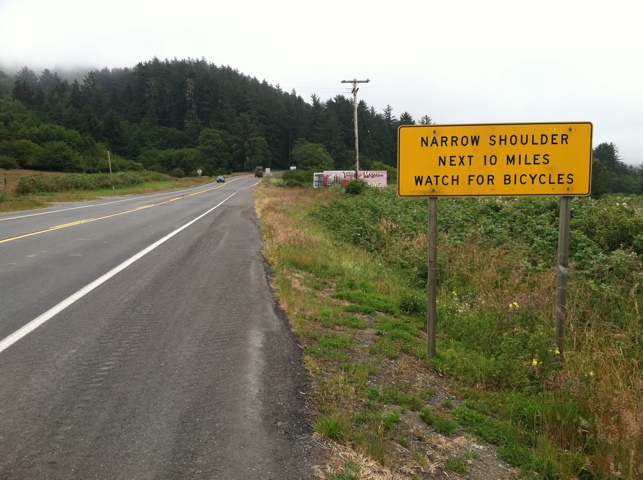 I heard a whole bunch of information that this would be a bad section because there’s no shoulder. But none of these folks mentioned that it was TWO uphill lanes instead of one – which is a HUGE difference in the cyclist’s favor. Furthermore, traffic was very light, even on a holiday weekend, partially because there’s no logging trucks anymore. (Though I must say when I was riding through eastern Washington on my cross-USA tour ten years ago, the logging truckers were by far the best drivers on the narrow curvy roads.) As long as I wasn’t riding the white line, traffic would just change lanes to pass. 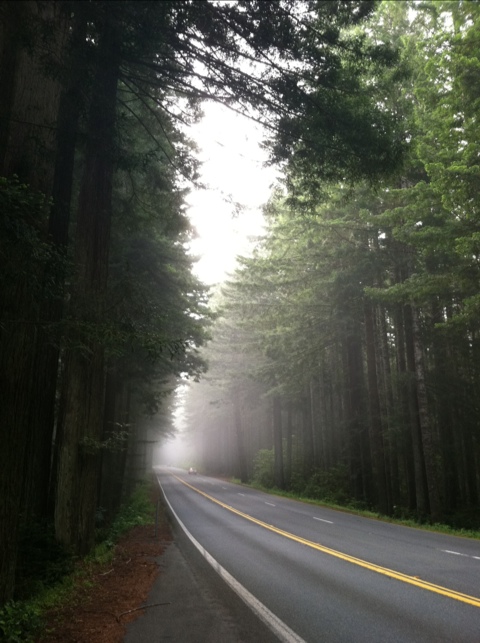 After a nice downhill, I could see the ocean again. I met the first of many cycle tourists I would see today, a couple riding northbound. I got some tips from them and we continued on our respective ways. 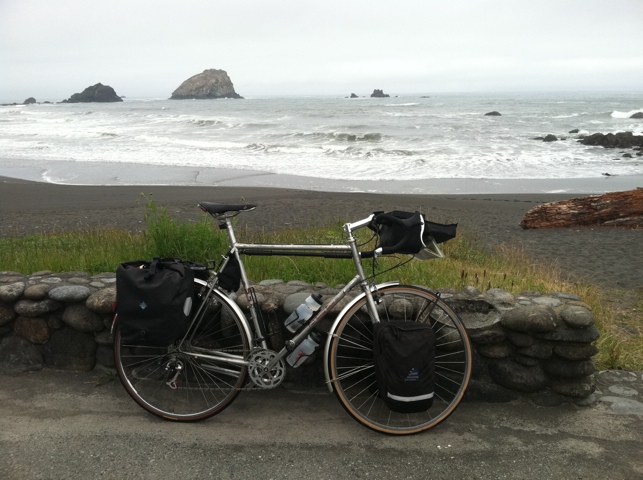 When stopping in Klamath, I saw another cycle tourist (well, after getting stuck talking to the local “crazy guy” in town), this time headed southbound. As least this time around I stopped asking the dumb question “are you riding the coast?” as a conversation starter, instead asking “north or south?” 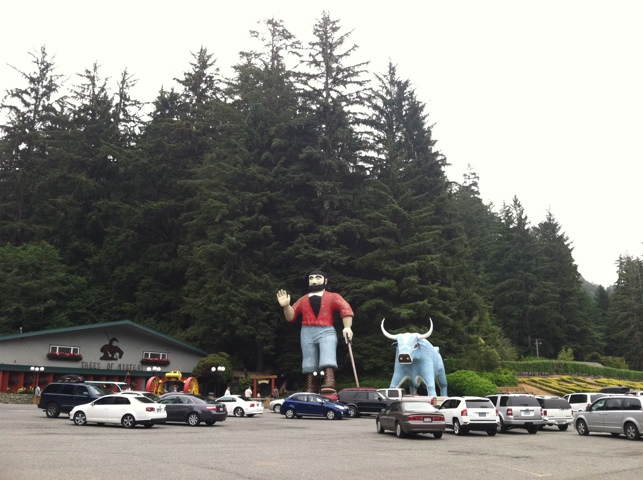 The Newton B. Drury Parkway alternate to US101 is definitely the way to go, either by car or bike. Plenty of places to pull over to access trailheads or just to look at the trees. Plus, after one big climb, it’s all downhill. We’ll have to see how the helmet camera footage turned out when I get home. 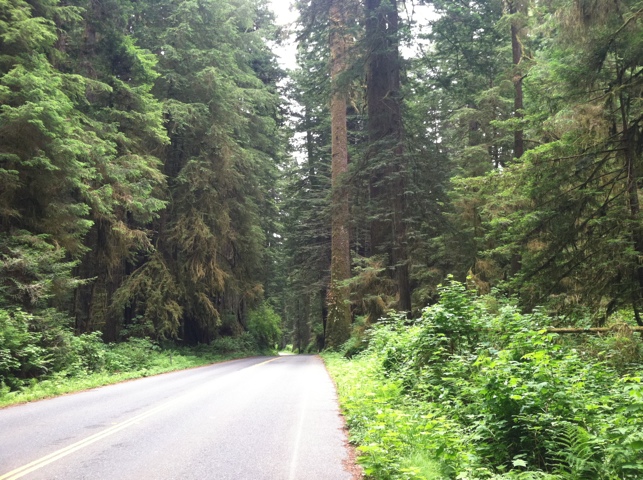 Then it was time for a lunch stop in Orick. Two young ladies from Vancouver riding down the coast invited me to join them as they were finishing up, I was able to share some routing and accommodation information from my Adventure Cycling map which was not on their maps. 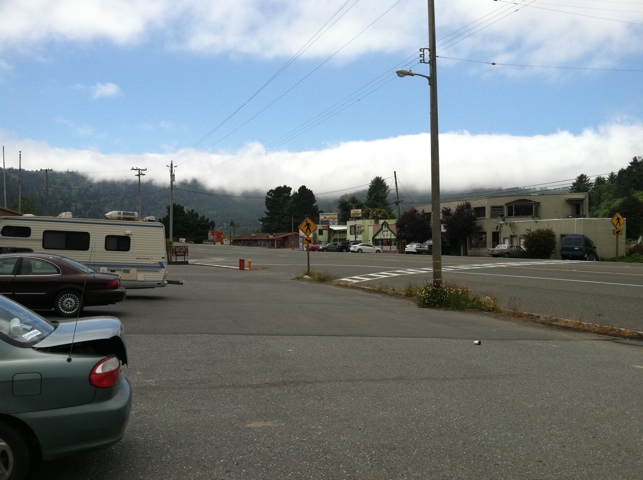 Headed south out of Orick, it was back through the hills and the redwoods. 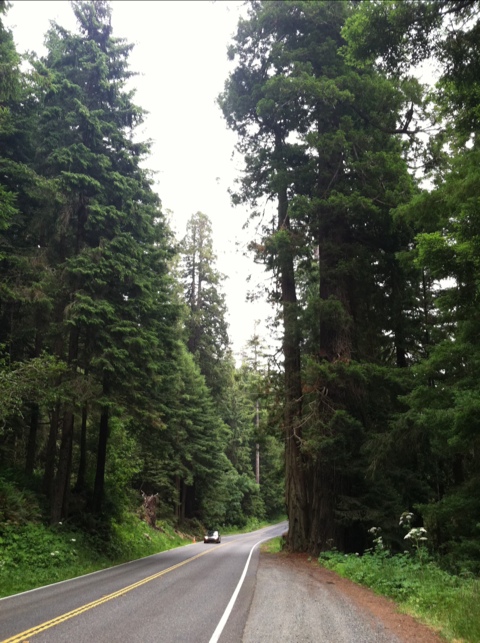 I have camping gear with me, though when cycle touring I prefer to camp near civilization so that I’m not going too far for dinner that night or breakfast the next day. But in hindsight, getting a sandwich to go in Orick and camping in Patrick’s Point State Park would have been the way to go. But it seemed like too short of a day on the map. So I instead went the additional 6 miles to Trindad, which ended up being a nicer (i.e. expensive) town than I expected. I found a barely acceptable room for $70 in a place where $200-$300 a night bed and breakfasts were the norm. 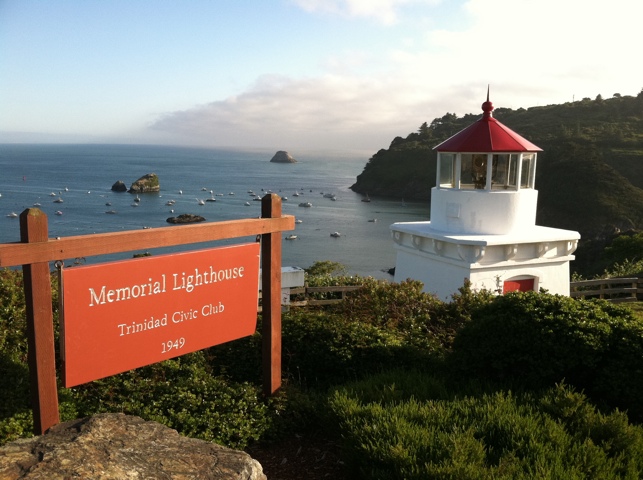