I woke up with the sun, as I always do when camping, and I was rolling out well before any of the other cyclists had started packing.

I told Rex and Roger I’d wait for them at the restaurant in Myers Flat. But there was no restaurant there (ummm, maybe I should have checked inside the fancy looking inn…), so I scrounged up what I could from the market. Then the coffee shop started setting up, but after a “we’re not open yet” and “you’re in my way” I hopped back on the bike and continued south. 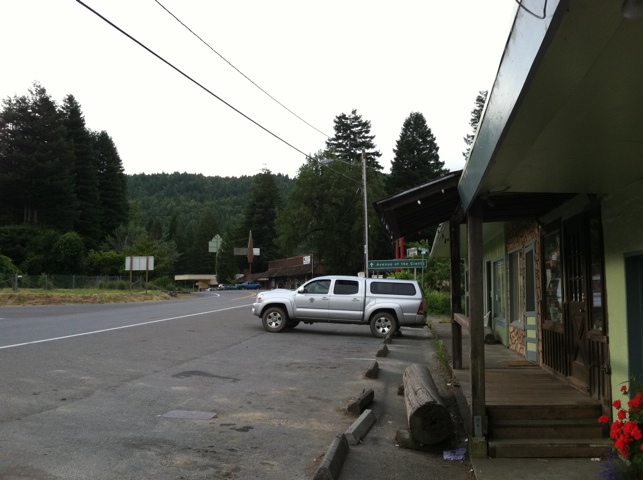 Aside from Rex, Roger, and the two Canadian ladies whose names still escape me, there was Tony – he found a ride to the campground on Craigslist so today would be his first day. There were also two other cyclists at the campground, but I never did get a chance to talk with them. (Make that three others – all of which I’d see again later that day.)

I rode with Rex and Roger much of the day yesterday. Despite being a little older, having a little heavier bike, and carrying maybe more gear (at least by volume), I’m going a bit faster on the uphills. I feel like I’m the sandbagging coworker who always complains how out of shape he is, yet kicks everyone’s butt on the hills. 🙂 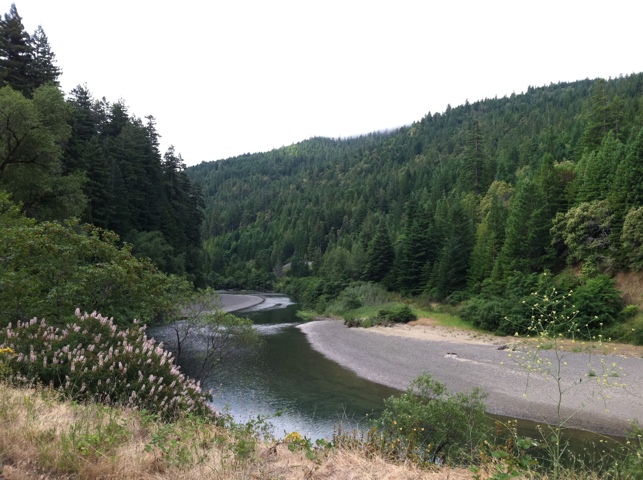 After finishing breakfast in Miranda, I kicked back on the outdoor patio while waiting for some of the other riders. The two Canadians (now I know their names, but I’m not saying) arrived first, and so I started riding with them. Amazing how the ride has now taken on more of a social aspect, with two groups of two, in addition to myself, all having the goal to arrive in San Francisco around the same time. But it means that I’ll be camping the rest of the rest of the way, as well as less time for updates during the day – but the tradeoff is worth it. 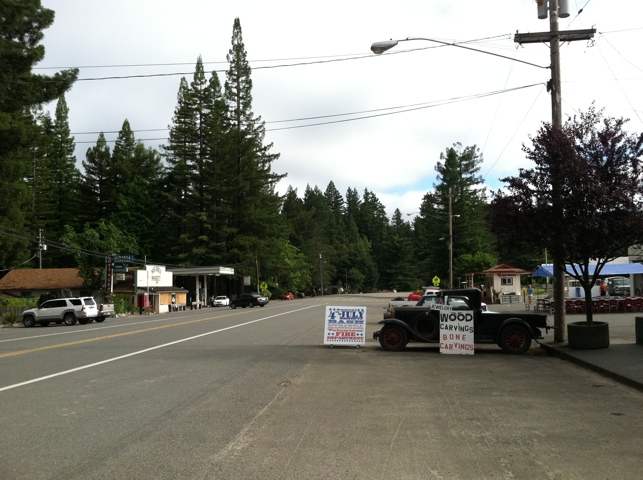 At this point the southbound route on US101 is roughly following heading upward and inland, with the cool coastal fog giving way to hot sunny days. 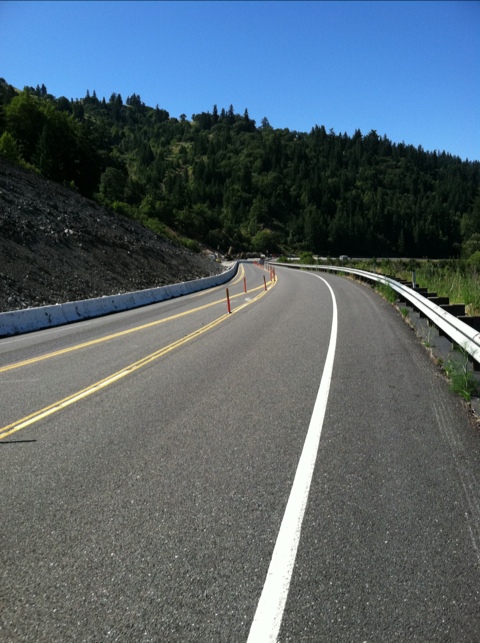 Stop for lunch and the sporting goods store (to borrow their bicycle pump) in Garberville. 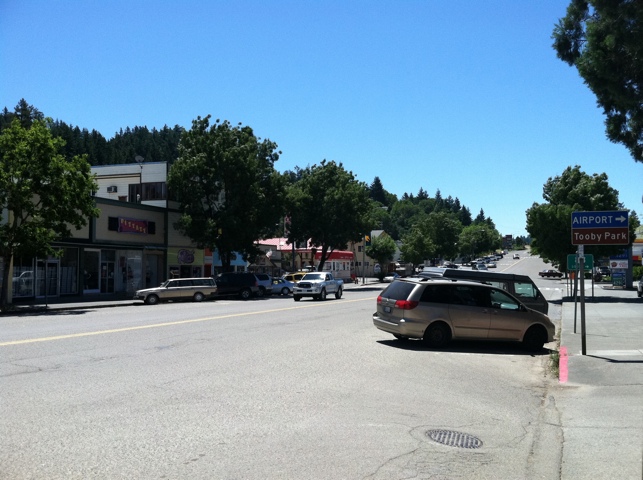 Back on the freeway again. 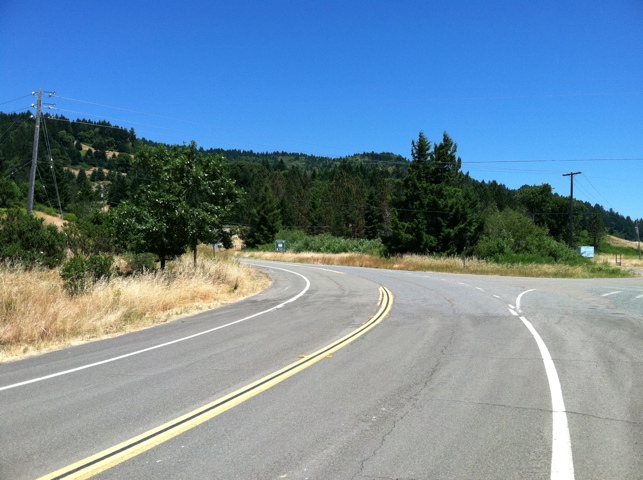 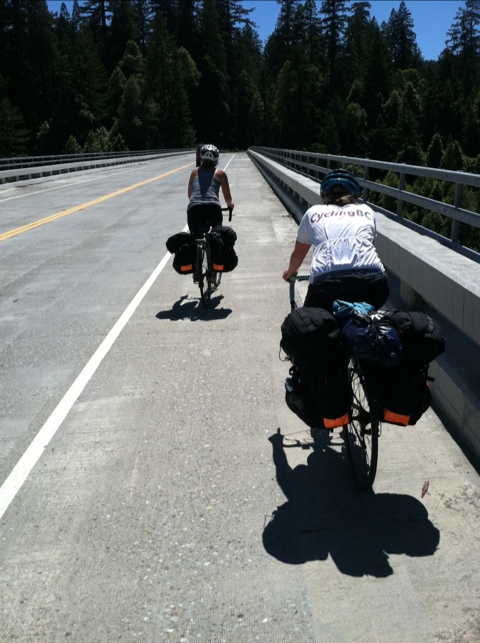 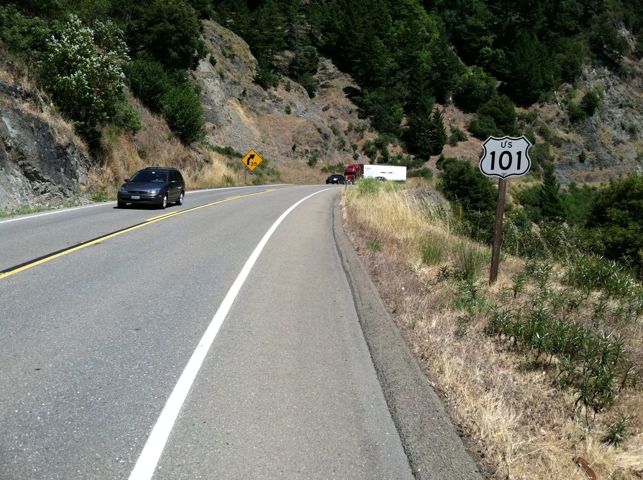 I thought of pushing on past Leggett today, but there was a nice restaurant/store (The Peg House) just across the street from Standish-Hickey State Park, so that was the stop for the night. A great deal for $5 a night, with hot showers. The rest of the climb to Leggett hill would wait for tomorrow.

All of the riders from last night’s camping stop made it here, except Tony, but I don’t think he was trying to go this far. I was looking at the map with Rex and Roger, and there’s a way to get to San Francisco by Friday night by stopping only in campgrounds. But that leaves a 70 mile day through suburbia on the last day. My gut tells me that’s a bit much, especially since I will have to get a rental car, etc. So I may have a longer day between now and Friday to break things up a bit.

(BTW, poor cell service, so this update brought to you by store wifi! Gotta stop by The Peg House if you’re in the area!) 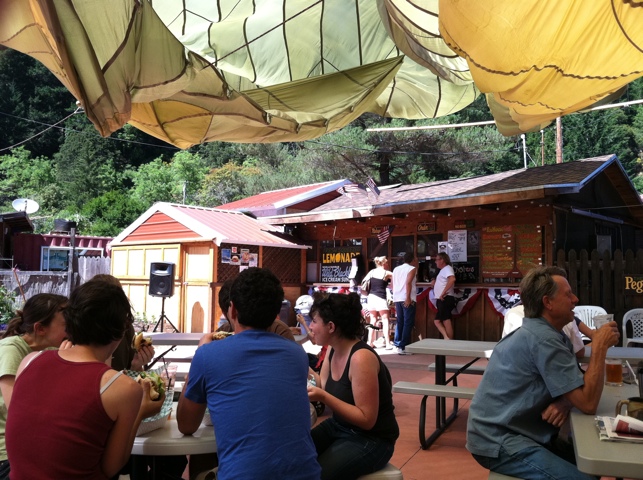