I lived in Ban Chang, Rayong province of Thailand in 1995 and worked in the nearby Maptaphut industrial complex. Rayong province is about a 2-3 hour drive southeast of Bangkok. The two largest cities in the area are Pattaya to the north and Rayong to the east, although they are only a fraction of the size of Bangkok.

Shortly after my return to the US, I created a web page to describe my experiences bicycling in the area. Thanks to modern technology, I was able to recently retrace my approximate routes on Google Maps using Ride With GPS. And so I felt motivated to tidy up this information after quite a few years. 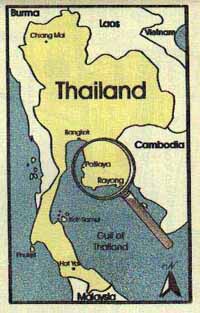 Here’s the general area where I did most of my bicycling. This was the best map I could find at the time! My main road loop is in green, and the places I rode my mountain bike are in purple. 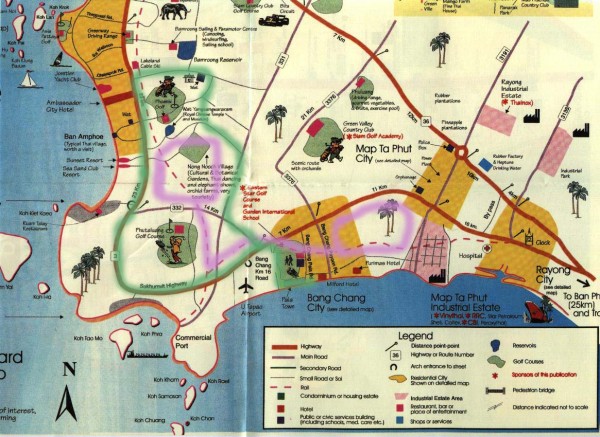 The route highlighted in green shows the loop I used to do on my road bike (about 40 miles). I did this loop in a clockwise direction early on Sunday mornings (my one day off from work) to beat the heat. And thanks to technology which wasn’t available in 1995, here it is, to the best of my recollection, on Ride With GPS. When I drew this, I stumbled upon someone else who did the same loop back then and drew it in Map My Ride – small world, eh?

Leaving my oceanfront apartment, I’d head west through the small village of Pala Beach. This was the section where kids would use their best English, where I’d be met with cries of “Hello!” and “Yoo! … Yoo!”. (Well, at least it wasn’t the “I love you” shouts I’d get at the jobsite! :-)) The road then went north, paralleling the edge of some government property to the west, home of a small public airport and a military airfield. To the east was an entrance to a modern housing complex, where many of my other expatriate coworkers lived.

Then it was a left turn onto Highway 3. Highway 3 is the main highway (usually called the Sukhumvit). Although it had two lanes in each direction, the traffic generally wasn’t too bad, and the shoulders were pretty wide. Generally speaking, drivers were used to dealing with slow moving vehicles on the road, although most of the slow movers were mopeds with two or more people on them. Occasionally I had to watch for wrong-way traffic using the shoulder, but at that hour in the morning it was no big deal.

After going pretty much far north as I could on the Sukhumvit before hitting the outskirts of Pattaya, I’d turn right down one of the side streets. This stretch was one where I regretted having 700×23 tires, since it was very bumpy with lots of potholes – but the worst was over in less than a mile. 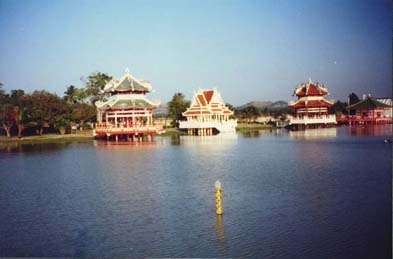 The road ride passed near an area with a lake, and lots of temples, and then some hills, and more temples on top.  Although I usually didn’t go by the lake on my “go fast” road ride, some coworkers and I would sometimes meander over here via a completely different route on dirt roads on our mountain bikes. (Don’t ask me to remember THAT route! :-)) This was a great spot to take a break and buy some fruit and water from the street vendors.

The ride took me past “Buddha Mountain” – a huge buddha carved into the side of a mountain.  They were using explosives to blast the mountainside during the time I was there, and when it was finished a few years after I left, the mountain actually made it onto a thirty second spot on one of the national (US) news stations!

From Buddha Mountain, it was all downhill until getting back to Highway 331.   All of the roads in this area had little to no traffic (at least on an early weekend morning) and were fun to ride. 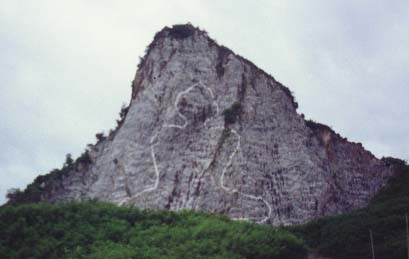 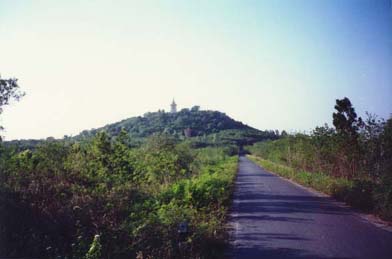 By late morning, traffic would start to pick up a little bit going south on 331, and then east on 332, although it still wasn’t a problem.  At the end of 332, I’d turn left onto the “wrong” side (they drive on the left in Thailand) of eastbound Highway 3 (only for a short distance), since I needed to make a right turn back to Pala Beach and Ban Chang.

The purple shows the areas I went on my mountain bike.  My after work “sprint” is here in Ride With GPS, with a similar loop in Map My Ride. Although the off-road terrain was mostly flat and not very technical, there were a lot more interesting things to see when venturing off the pavement.  The dirt roads were generally of good enough quality for touring bikes also; although some of the muddier parts during the rainy season were passable on mountain bikes, touring bikes would have had more difficulty. 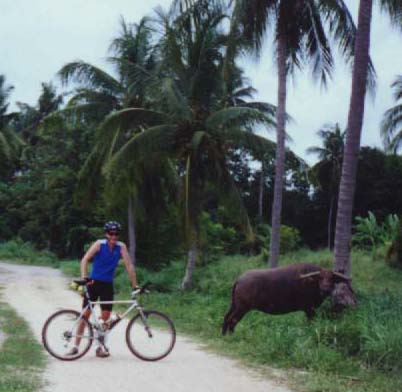 Me, back in the day

The purple circled area to the bottom and the right was where I went for night rides after work a few times a week. I had a combination road/off-road loop, with some minor variations, that would give me an hour’s ride. Most of the dirt roads in this area went through farms. 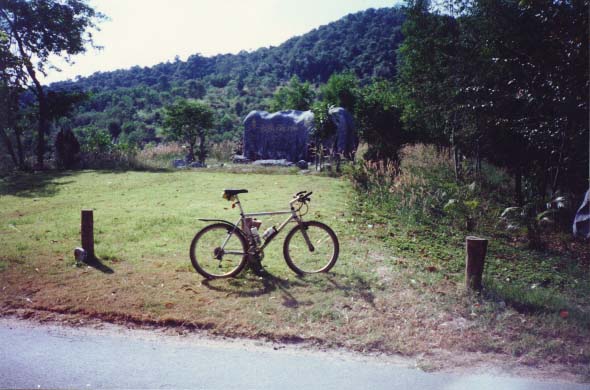 I don’t remember where I saw this monument!

There was usually a dirt road paralleling the train tracks – this worked out quite well to get under the Sukhumvit (Highway 3) to the other purple circled area, to the top and the left of the map. This area made for good exploring – there were many hidden small villages accessible only from these roads. Many times I would be the first westerner that some of the residents had ever seen. Also, there were dirt roads that linked to the area with the temples that I described above in the road rides section. 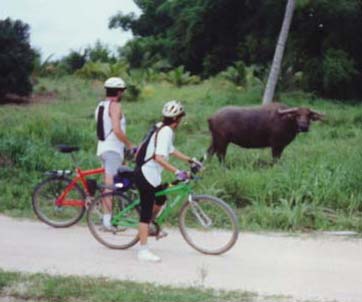 One time I rode with a couple friends on a “coastal” route going east. We were trying to make it to Rayong Resort (east of Rayong city) and back in one day. It was a little too far – we had to turn back (it would have been nice to ride to ride there, stay overnight, and then ride back, but most of us were too busy working and didn’t have the time). Still it was a good ride. We followed the train tracks through the Maptaphut Industrial Complex (certainly not the best part of the ride), and then followed some little traveled roads along the coast. There was even one rickety rope bridge that we had to walk our bikes across! Also, I still can’t forget riding through one part near Rayong city – we called it “the land time forgot” – a community with narrow concrete alleyways (just wide enough for two bikes side by side) with dwellings on both sides – real weird! Then once we left the city, I can’t believe we didn’t get lost riding through some dirt roads we had never traveled before. What an adventure!

The major bummer about riding offroad in Thailand was the dogs. There was (still is?) an overpopulation problem, and many of them were either wild or not very well fed. Often times there were very territorial, and you would have to confront them if you want to ride along a section of dirt road. There were different techniques for dealing with them which had worked with varying success. Sometimes riding by them real slow, not giving them the opportunity to chase was effective. Other times squirting water at them or firmly yelling “No” got them to back off worked. Last, but not least, was to just plain outrun them!

The locals were also very friendly, no matter where I rode. Sign language and gestures worked quite well for communicating simple things. Just be respectful – don’t photograph them without their permission, and don’t use bottled water for dumping on top of your head to cool you off! And don’t go into the temples shirtless and lycra shorts.  Biking Southeast Asia with Mr Pumpy has some great riding tips and a summary of the local culture.

There were some other roads, such as Highway 36, which on the map would seem great for cycling: only one lane in each direction, wide shoulders, rural scenery, etc. But it was the main road between Pattaya and Rayong (since it’s more direct than the Sukhumvit) and it carried a large volume of fast-moving traffic, including the big trucks.

The combination above seemed to bring out the worst in drivers, much more so than in western countries. Overtaking behavior was abysmal, a significant minority of drivers would use the center of the road (straddling both lanes) as an imaginary third lane, causing oncoming traffic to swerve into the shoulder at the last minute. Sometimes, although not as frequent, the shoulder was used to pass slow moving vehicles on the left. There were many crashes during the time I was there: head-on collisions, as well as mopeds in the shoulder getting hit by drivers trying to avoid a head-on collision.

Sadly enough, it was even a road we tended to avoid when driving, let alone bicycling. Though now, apparently the road is now quite different, as it is now a multi-lane divided highway. Though on the other roads (including the main Sukhumvit), motor vehicles were generally accustomed to sharing the road with slow moving vehicles (usually mopeds), so I didn’t have any problems.

The area around Ban Chang and Maptaphut had also grown very rapidly since my departure. Highway 3 east of Rayong toward Chantaburi was in the process of being widened from a two lane rural road to a six lane major highway. Growth has cooled off quite considerably during the recent Asian economic crisis, but I’m not sure how much things had grown since I left in early 1996.

From a pure cycling point of view, this wasn’t the most exciting in terms of terrain and scenery. But it was certainly was a unique and exciting experience, especially since I was living in that part of the world anyway!