Chimney mounting brackets for antenna masts were surprisingly hard to find. Well, maybe not too much of a surprise, since these days are not like the 1950s and 1960s where almost every American household had a TV antenna on their roof. (More details later on the project using the antenna mast.)

Here’s what I was able to find, along with my first impressions of each.

Philmore 15-1218: I’ve only seen Philmore products at Fry’s Electronics. If I first attached the mount to the chimney, then I would have to lift the mast to get it inside the bracket, and I didn’t want to do that. (Though see update later in this post.) Or I could slide the mounts onto the mast and then attach the whole assembly to the chimney, but that didn’t look fun either. (Instruction manual here.)

Channel Master 9067: I also saw this at Fry’s, but it’s also available elsewhere. This mount looked pretty solid, but there’s one flaw: nothing to stop the mast from spinning around inside the mount if there’s a strong wind. There’s also the Channel Master 3080 with a 12 foot strap instead of an 18 foot strap, but that mount looked less robust.

Radio Shack Ratcheting Mount: No longer in production, but I was able to find a couple at my local Radio Shack. This one seemed the easiest to install (think solo installation) due to the ratchet mechanism to tighten the strap, rather than the nuts and bolts of the other mounts. Also, the mounting point for the mast has serrated edges to hold it in place. I am aware of the bad reviews on this product, though I figured I would be OK if I were very careful not to overtighten it. (Instruction manual here.)

So I went with the Radio Shack mount.

Unfortunately, the ratchet mechanism, which initially seemed like a feature of the Radio Shack mount, was the major downfall. As you got close to getting the mount tight enough, there would still be some slack on the metal strap on each side of the mount. With the other two mounts, you’d simply tighten the nuts on each side as much as you needed to take up the slack on each side.

But the Radio Shack mount just takes up the slack on one side. That’s fine in theory, since you’d expect the strap to slide around the chimney to balance out the tension on both sides. In practice, as you started approaching the proper tightness, the friction of the bricks on the other side of the chimney would prevent the slack on the other side from being taken up. So instead the mounting bracket would become offset, as in the photo below. (Edit: I may not have followed the instructions correctly, see post comments below.) 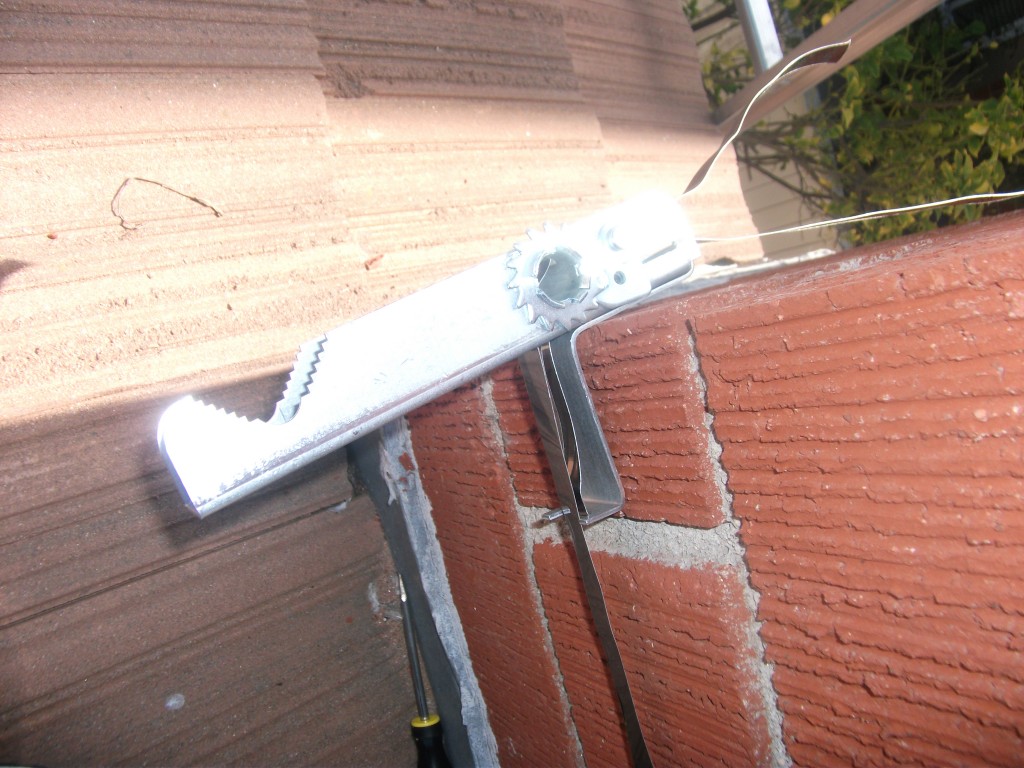 Tightening just one more click resulted in some pieces of brick being chipped. So enough of that mount, and it was time for another trip to Fry’s.

I took a closer look at the Philmore and Channel Master mounts. I was originally going to get the Channel Master, but then I took a closer look at the Philmore. I was wrong about thinking I had to lift the mast to get it into the mount. Instead, it can be snapped in from the side. Furthermore, the mount has a provision to add a set screw so that the mast doesn’t spin in the wind. So I went home with the Philmore mount (and a bunch of other stuff I didn’t need, but that’s another story).

Despite the usual trials and tribulations of dropping tools off the roof, forgetting other tools, and other reasons requiring me to climb up and down off the roof several times, the Philmore mount went up a lot better and was much sturdier than the Radio Shack one. Though I’m glad I picked up some lock washers from Home Depot, I’m surprised they didn’t provide any in the Philmore kit. One thing which wasn’t obvious from the instructions was that the strapping clips needed to be as close as possible to the triangle fasteners. Otherwise you end up sliding the fastener over there anyway as you tighten the nut.

Glad I got the mount up just in time before the rain! 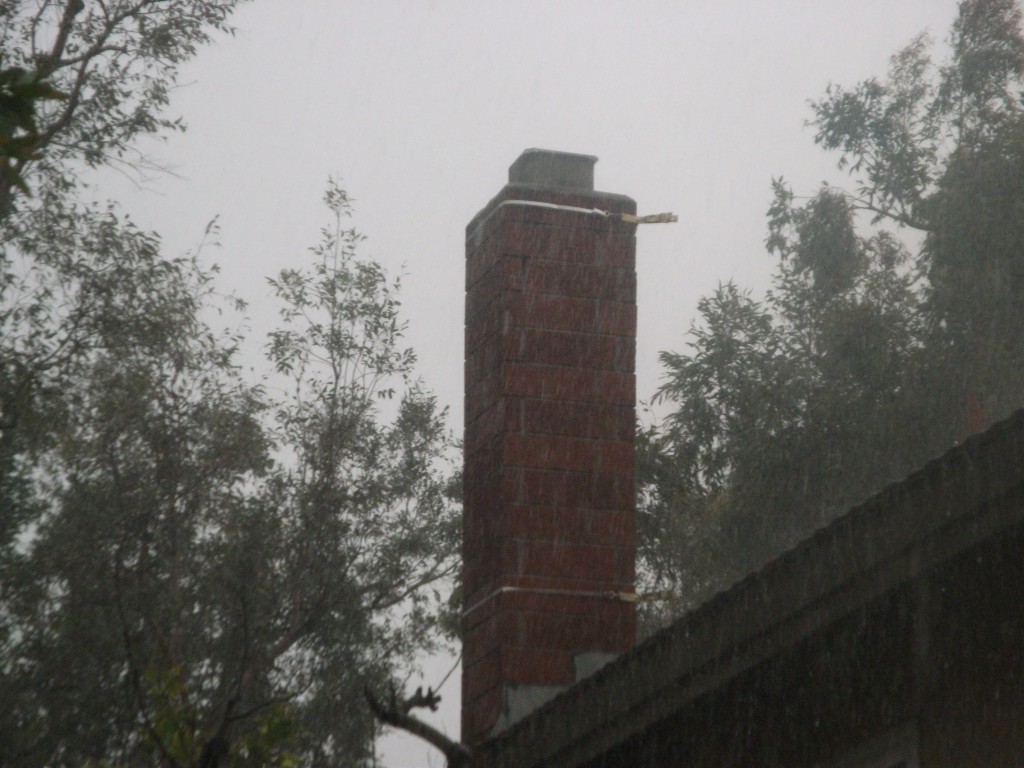 And now that the rain has stopped here’s a better photo. 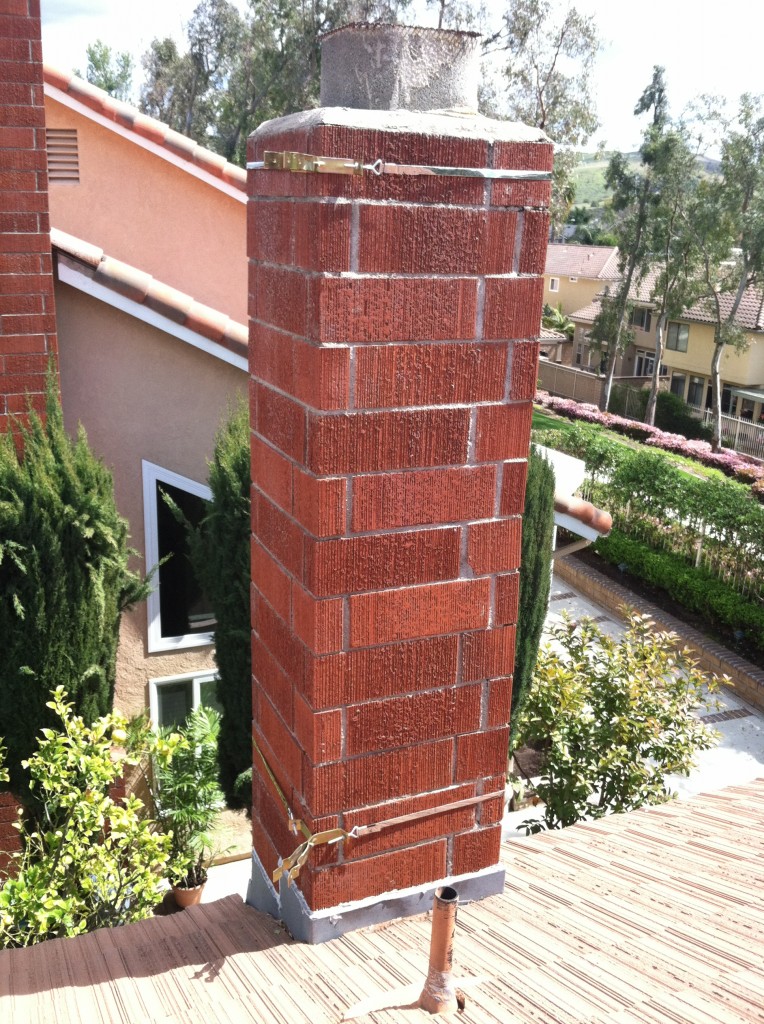 A closeup of the Philmore mount. I’m going to add a locknut on top of those nuts just to be on the safe side. 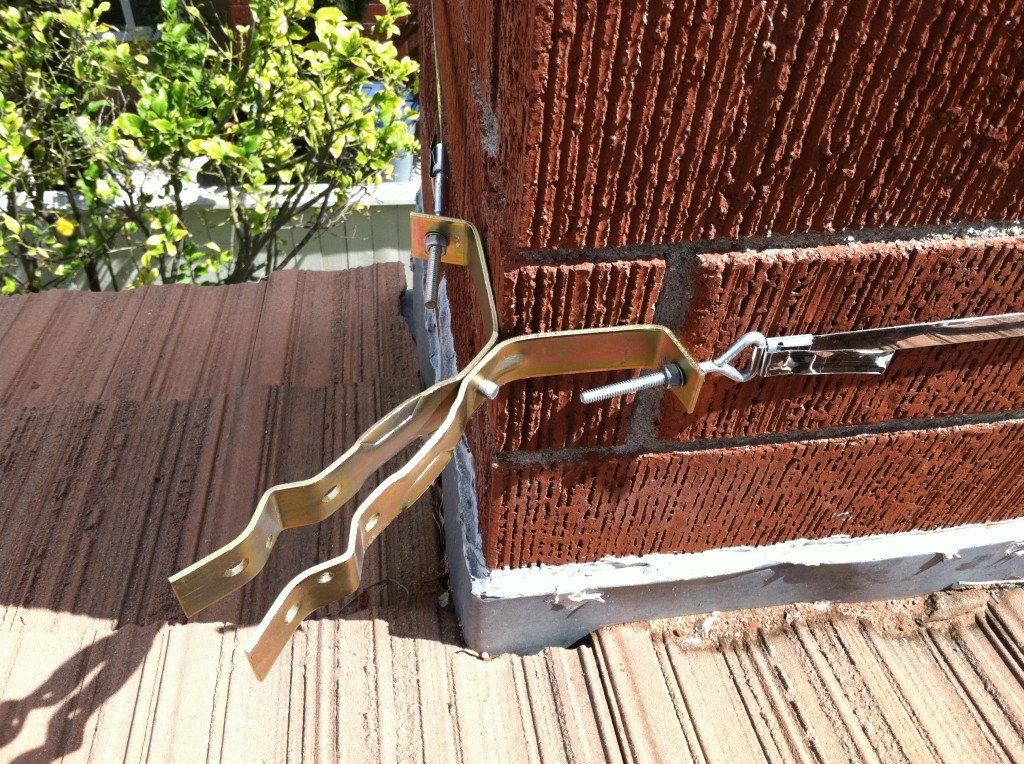 Stay tuned as the project progresses…