I’m in Arizona this week visiting the inlaws, and their location on the edge of civilization has the advantage of being able to do rural bike rides from their front door. I’m a big fan of the various route mapping websites, they give some great route suggestions (though need to be taken with a grain of salt) which are helpful for those who are from out of town. So I looked on Ride With GPS and found the Casa Grande Century route, which I modified to a 56 mile loop and rode today.

This was not a hilly ride by any means, as the ride would circumnavigate the hills in the photo below. Though the caption on the Ride with GPS route reads “wind is the biggest problem with this route”, and the wind would not disappoint! 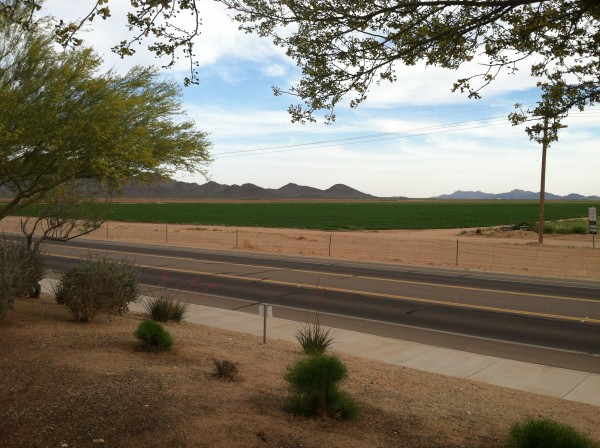 San Tan Valley was a little more populated and so Hunt Highway was busier than I had expected. Ah, that’s why the Casa Grande Century took other roads in the area. I stopped at a mini mart to get a Gatorade (for now) and a Power Bar (for the road) – wow, I couldn’t believe Power Bars were $2.79 each, that’s expensive even for a gas station! 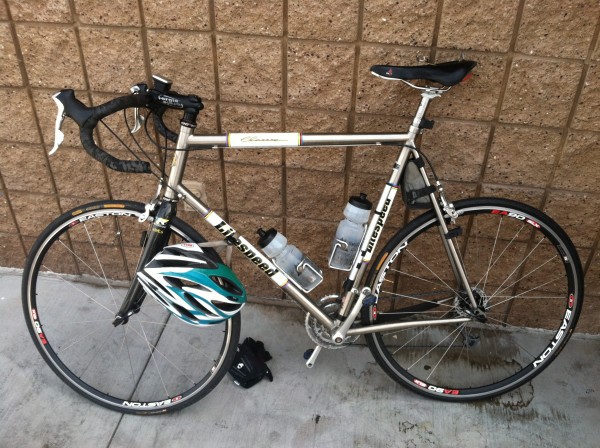 And then around mile 20, oh drat, a flat! I never did find the leak in the tube or anything stuck in the rear tire. Though the tire wear indicators were near the end, and while the tire would still have been suitable for the silky smooth roads in Orange County, it was definitely due for replacement for rural Arizona. Although I don’t like doing this without knowing the source of the puncture, I replaced the tube. Luckily it held air and I continued along.

A few miles later I crossed some railroad tracks. The rails stuck above the tracks more than usual, and BAM! The familiar sound of a pinch flat. I should have made more of an effort to get that tire up to pressure after the first flat. I was out of spare tubes and had to resort to finding and patching the leak in the first tube. After some time I found the leak and used a temporary “stick on” patch rather than a permanent “glue on” patch, since the repair only had to last the rest of today’s ride.

The repair held, and I continued on my way, though much later than I had planned. Traffic picked up on Highway 87 northwest of Coolidge – yet another place the Casa Grande Century avoided. The breaks in the shoulder rumble strips were welcome, as this allowed for riding in the shoulder when it was clean, while being able to move out when it became littered with debris. 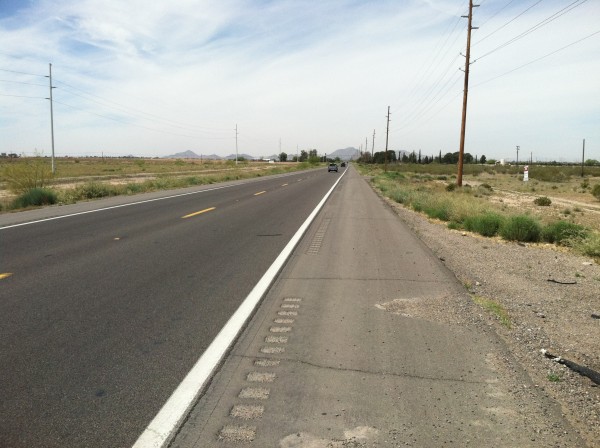 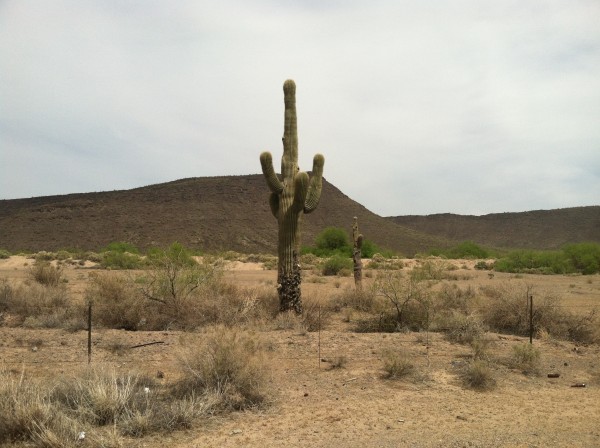 I started to feel nauseous as I was on the “home stretch” of 87, which I’ve cycled several times before.  Though the tailwind I had hoped for was a headwind – surprise, surprise! I originally figured that it was the now warm water in my water bottle which was causing me to feel bad. But that couldn’t have been the issue, after all, I’ve biked across the US solo, part of which was during a 100 degree heat wave in Iowa, and temperatures here were in the high 80s and dry.

So with about five miles to go, I found a good place to pull over and sit down. Actually, that turned into lying down (far enough from the road, even off the eight foot shoulder) using my helmet as a pillow. I called my wife’s cell, inlaws’ home, and inlaws’ cell as I was in no state to ride – all no answer. Of course, they’re all at the pool today. Just in case they needed to identify my body after the vultures picked at it, I turned off the lock code on my iPhone and set it down next to me on top of my gloves.

I was going to have to figure this out myself. I then thought through the day’s events and realized that in all the flat tire commotion, dealing with headwinds, etc., I had neglected to eat anything! (Reminders of the time I “bonked” 95 miles into a century ride, and even with only 5 miles left, there was no choice but to recover before riding again.) So it was time to dig into my Power Bar. But those don’t go down very well (actually, at all) dry, and I had just finished the last of my water before I stopped.

By that time, someone in a white sedan stopped and asked if I needed any help. Despite my experience with being self-sufficient, there’s certain times (not just on the bike) where you’re at the mercy of the kindness of others. I asked if he had any cold water. He brought over a cup of ice water and poured it into my water bottle. I thanked him and he was on his way.

What a difference the cold water and half of the Power Bar made! Soon I was able to get back on the bike and hobble the five miles home back to the inlaws’. 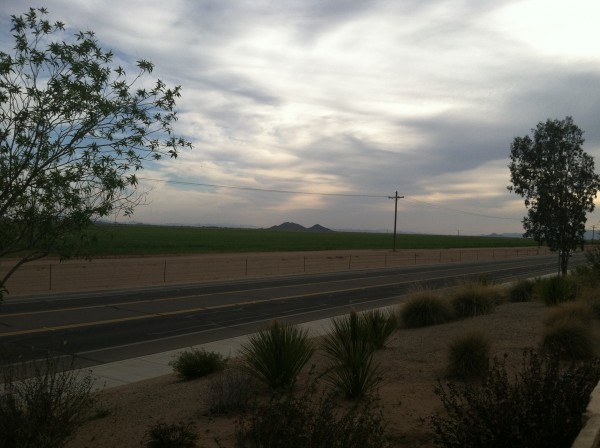 So if that gentleman in the white sedan is reading this, thank you so much!