When we first got our cabin in Wrightwood almost ten years ago, I briefly looked at the possibility of putting an antenna on the roof and getting free TV. The consensus was that reception was limited to a few homes on the east side of town with a clear view of the high desert, where the Los Angeles area stations are rebroadcast from the Victor Valley Translator.

So with cable or satellite the only options, we got an entry level package for Dish Network, which we were able to later scale down to $7/month for local channels only. Over time that has crept up to $15/month, and given that now have other viewing options such as Netflix, I decided to revisit the idea of free TV.

I found the TV Fool website and generated a detailed report showing what channels I might have a shot of picking up in my area. But the detailed coverage maps make for more interesting viewing. Here’s one showing one of the UHF channels from the translator. The translator is in the upper right, and Wrightwood is the red pointer near the center. 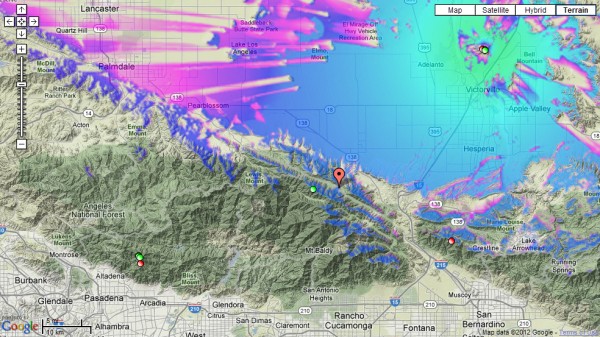 Here’s a close up of coverage in town. As expected, reception in most of town is blocked by the hills to the north. Also, the area by upper East Canyon and Desert View from which the desert is visible (duh!) shows up in blue. But the surprising thing is the blue “sweet spot” between Heath Creek and Sheep Creek – where my place is. That seemed strange at first, since we can’t see the desert from my place. But it makes sense, as that’s far enough east to get around the hills on the north side of town, yet far enough west to get around some hills by Highways 2 and 138.  Even though I can’t see the high desert from my location at about 5800 feet, it seems possible there could be a clear line of sight to the translator sitting at 4500 feet. 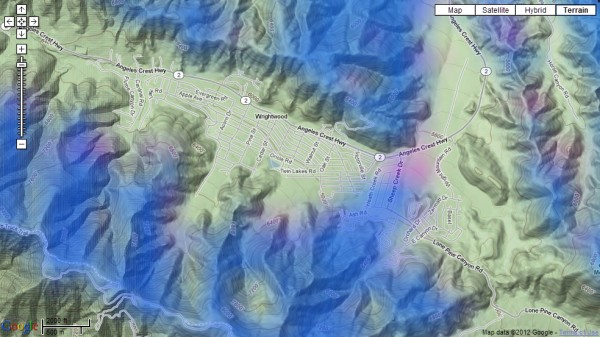 Here’s the elevation profile showing the signal from the translator (on the left) to my location between Heath Creek and Sheep Creek (on the right). The hill which the incoming signal hits is between Highway 2 and Horse Canyon, visible on the close up map above. The TVFool model has tried to account for the path of the UHF signal after it hits the hill (this HDTV primer page is a great explanation on how TV signals travel), which is why the higher area is blue and the lower area is purple.

With all the stations in one direction, and all of the them being UHF from the translator, I searched for the highest gain directional UHF only antenna I could find. I narrowed the selection down to the Winegard HD-9032 and the Antennas Direct 91XG. It seems that others have too: link 1, link 2, and link 3. I settled on the 91XG and was able to get it for $50 online.

Last weekend I climbed up on the roof to find a home for the antenna. Although my location is “blue” in the TV Fool charts, their modeling does not account for obstructions such as trees. Walking around on the roof, I was able to find a spot which wasn’t blocked by trees. Make that “the” good spot, there was only one. It’s slightly left of center in the photo below. I’m shooting the gap between the power lines, my tree below them (topped like a mushroom courtesy of the power company), and the neighbor’s trees to the left and the right. 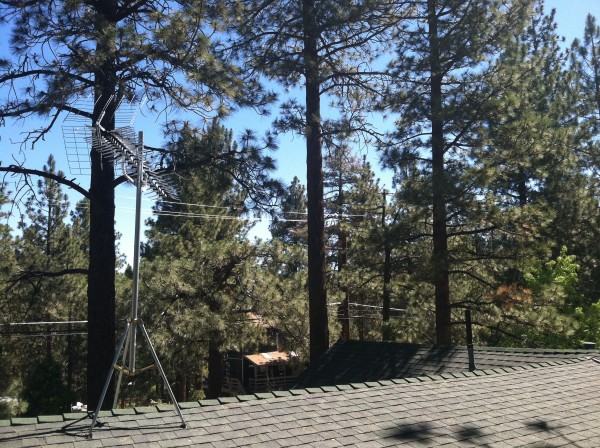 It’s nice to be able to bring a TV up on the roof to check reception as I moved the antenna, couldn’t do that ten years ago! 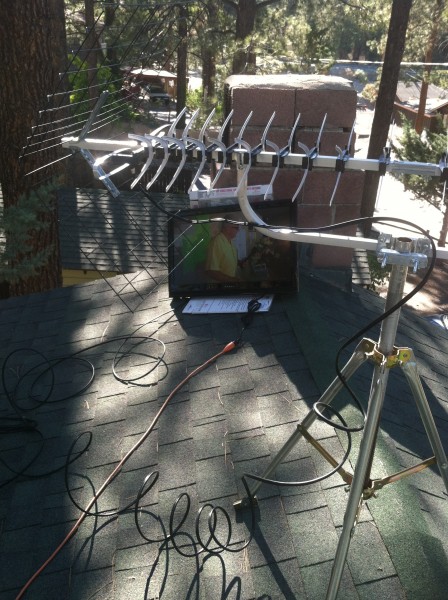 Being on the side of a hill facing the signal, antenna height shouldn’t matter too much for UHF reception (as shown in this diagram from the HDTV primer). Furthermore, lower might even be better (in theory) due to ground reflections (as shown in this diagram from the primer). But I found the signal came and went as I kept raising the antenna, and then I lost the signal completely after I got past a certain height. That was telling me line of sight through the trees was the single largest factor affecting reception, and my own tree branch was the main culprit. That was dealt with promptly, though not by me! 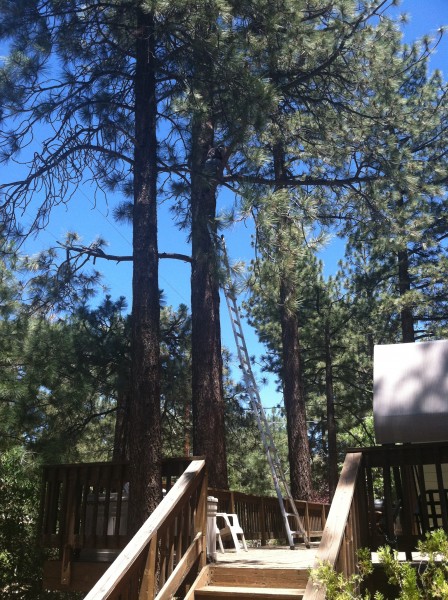 Note the bigger gap between the trees, left of center in the photo. 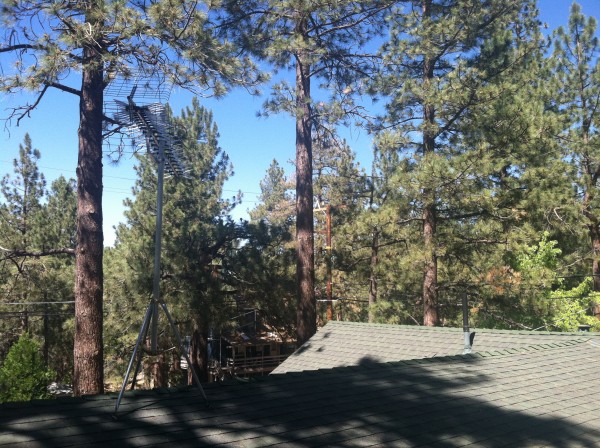 Unfortunately, I couldn’t take full advantage of the height benefit just yet. I had already cut my 10 foot EMT conduit mast down to 6.5 feet, thinking I wouldn’t be going any higher. That’s too bad, because when I unbolted the mast out of the tripod and lifted it six inches, I got all my signals back!  So I moved the antenna back down the mast to the position in the first photo to get the signals back for now.

Stay tuned for my next installment as I try again with another 10 foot piece of conduit and throw a VHF antenna in the mix!