Now that we completed a major remodeling of the back patio, I wanted to be able to connect to my wireless network so I could work out there, weather permitting of course. Although the wireless signal was strong inside the house, the signal strength dropped dramatically when stepping outside. I tried upgrading to larger, higher gain router antennas, but to no avail. The main issue was that the wire mesh in the stucco was blocking the wireless signal.

So I really needed an outdoor based solution to the problem. Then I found this outdoor access point: the Hawking HOWABN1. It was designed to be weatherproof, and the only hardwired connection is an Ethernet cable, as power is provided over the Ethernet cable via POE (Power Over Ethernet). The Hawking had mixed reviews on Newegg, but mostly from those who were trying to use it as something other than an access point. The reviewers who were simply using it as an access point gave it good marks, so I ordered one. 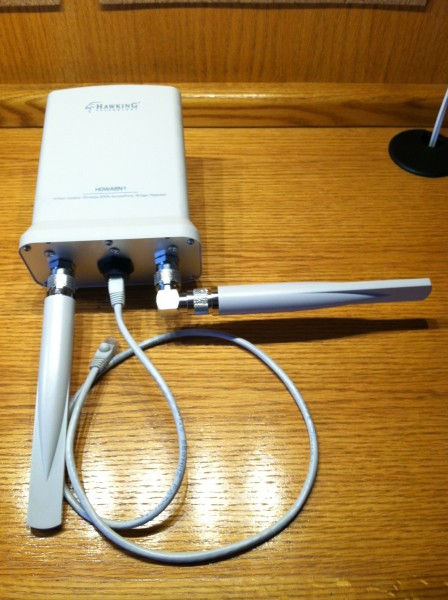 One challenge was finding a suitable mounting location for the access point where I would be able to run an Ethernet cable to it. The back patio is on the side of the house with vaulted ceilings in the dining room and master bedroom, so there was no attic space to run the Ethernet cable. The other challenge was finding a mounting location where I had access – why didn’t I think of this project before I had the new patio cover put in? 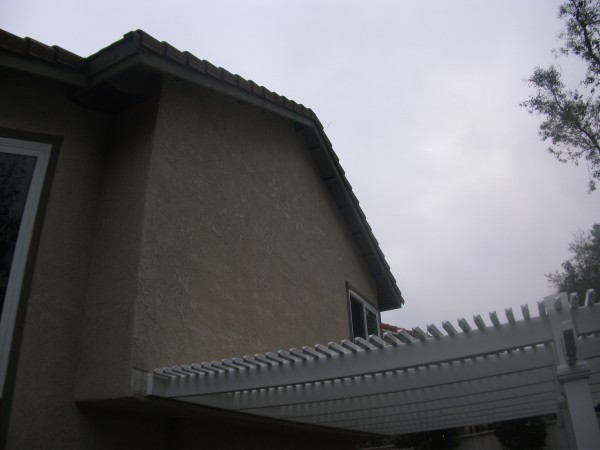 Ultimately, I settled on locating it on the eaves at the roof peak. I was able to climb out the bedroom window on the front of the house, onto the roof above the garage, and then use a small ladder to get from there to the second story roof. (I wonder what the neighbors were thinking…) 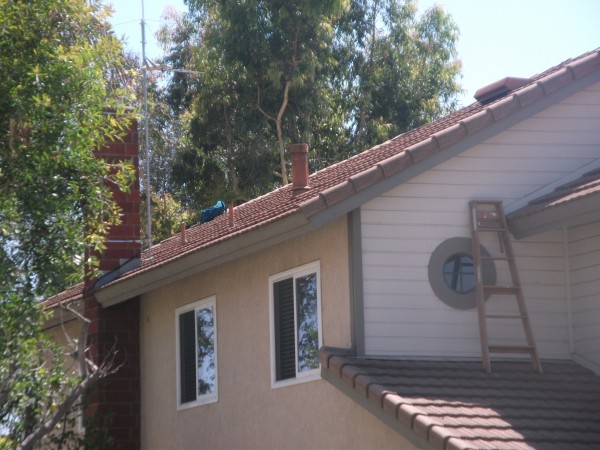 Then I was able to (carefully!) hang over the roof peak and install the access point. 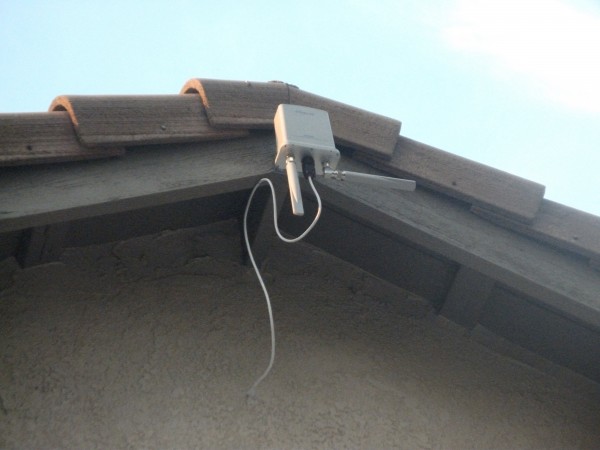 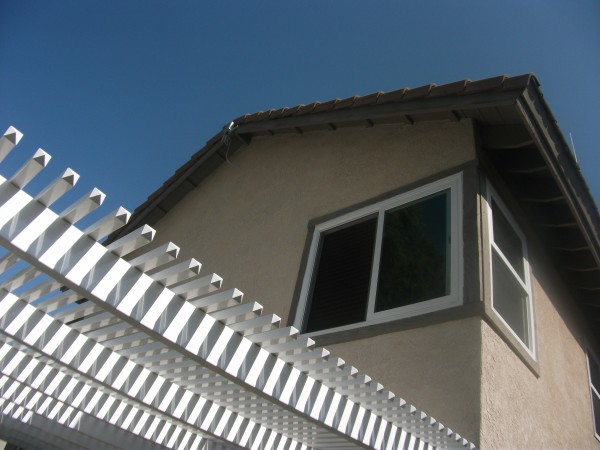 Now how to get the Ethernet cable near the roof peak without attic space on the wall behind the access point? Under the roof peak is a beam in the ceiling on of the master bedroom. The beam is framed in drywall, but pieces have been flaking off for a while ever since I installed a ceiling fan on the beam. So I simply drilled a hole in the exterior wall and under the beam, allowing me to run the Ethernet cable along the beam… 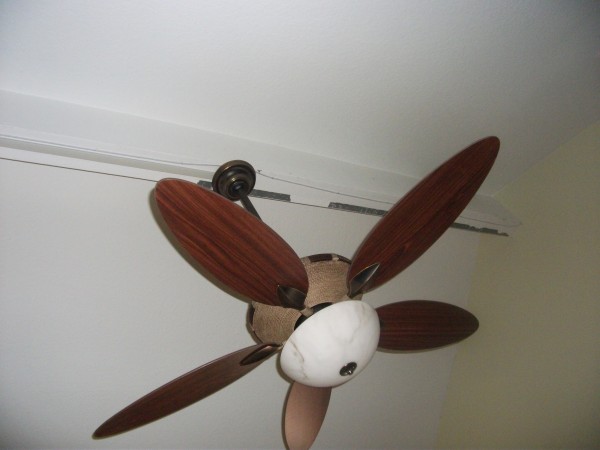 …and into the attic. As part of a future project, I will be covering the beam with a faux wood beam (made of hard foam), so the Ethernet cable will be invisible. 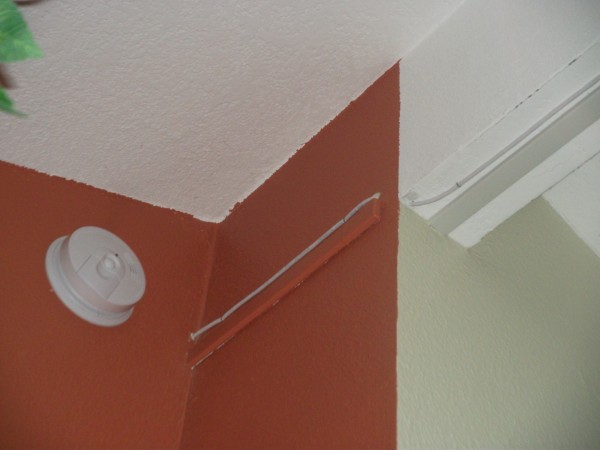 From the attic, there was no problem with routing the cable to a spare port on my router. (Well, actually to a switch in the attic, which is then connected to the router.)

Fishing the cable through the wall was tricky. I used a Dremel tool to cut the end from an electrical fish tape, so that it would fit through the 1/4” hole I drilled for the cable. Then I fished it through from the inside to the outside, and then from the roof I used a pole with a magnet in order to grab the end of the fish tape. Then I was able to cut off one of the 8P8C connectors on the cable and pull it in from the outside, so that the factory 8P8C connector would be on the outdoor end. 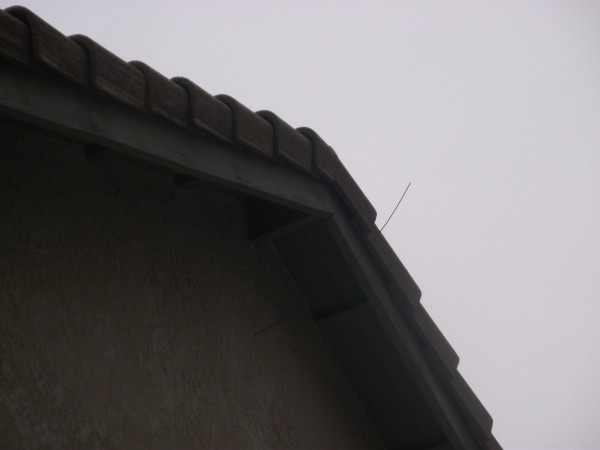 I was able to incorporate two drip loops in the cable in order to avoid rainwater draining down the wire and into the stucco wall. Even so, using a ten foot pole, I was able to reach the wire from the master bedroom window in order to apply silicone sealant where it exits the stucco. (Yes, neighbors walking past on the greenbelt behind the house were wondering what I was up to….) The “generic” cable from Fry’s Electronics is “CMX” rated for outdoor enviroments. 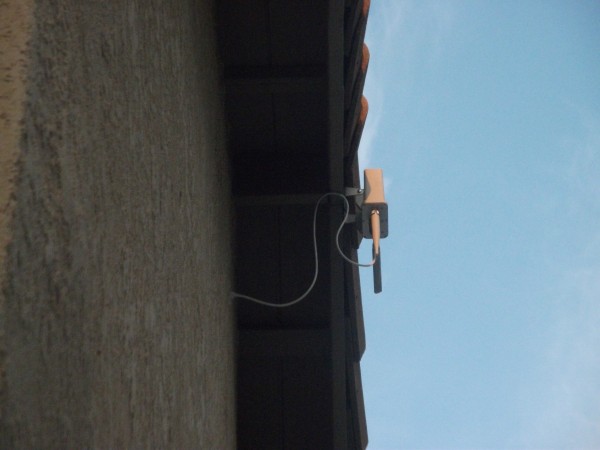 So far the access point has worked out well. I’m able to access the internet, as well as my NAS and network printers. I’ve given it the same SSID and password as the wireless network on my router, but with a different wifi channel. So the wireless devices will instantly “roam” from the router’s signal to the access point’s signal when I go from indoors to outdoors and vice versa.

Although my router has a function where I’ve set up a “guest” network with internet access but isolated from the wired clients, the downside is that I can’t set up the same thing on the access point. That’s not the fault of the access point, as it is designed to give access to the network if the wireless credentials are met. I suppose it would be possible to have such a guest network if I set it up the Hawking as a wireless repeater instead of an access point, but then my wireless bandwidth would be cut in half.

Hopefully this solution works well over time. My main concern is the POE adapter, which I have installed in the attic. That location is nice to get it out of the way of the office, but the heat of the attic is not the nicest thing to do to electronics. Furthermore, the POE adapter is a non-standard 48V, 0.5A. Maybe I should look into a spare from Hawking?

(Apologies for having additional comments disabled on this post. For some reason this post – and only this post – gets comments which don’t get probably flagged by the SPAM filters.)