I’ve participated in many organized bicycle rides over the years, but this time around I wanted to volunteer to help out with the ride and give something back. The Tour de Cure was a worthy cause, since my wife has Type 1 diabetes, and most of the money raised goes directly towards fighting diabetes, with little going to overhead expenses.  In the months leading up to the event, I worked as the road logistics co-chair, with the main responsibility of developing the road routes to be used for the ride. On the day of the event, I was able to enjoy taking a break from the organizing portion and be a “worker bee” as part of the MARC team – a group of motorcycling and amateur radio enthusiasts who donate their time to provide support for charity bicycle rides. My assignment was to be the bicycle mobile “tail” for the 55 mile ride. 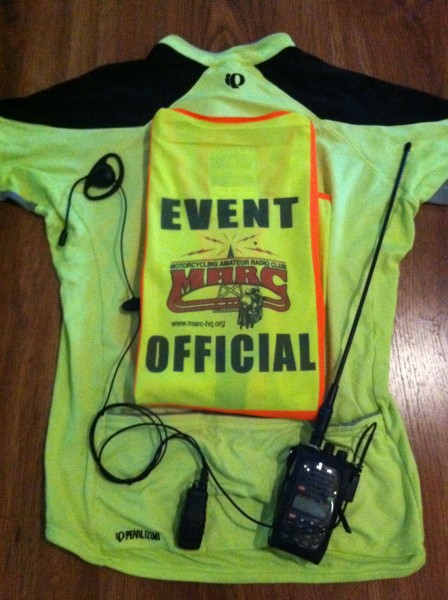 I waited for about five minutes for the mass start to clear before heading out. I soon caught up to the last rider, who had fallen behind due to front derailleur issues, but was OK now. I let him know that there would be a mechanic at rest stop one who could help him out. When I got out to Laguna Canyon Road, the motorcycles gave me the OK to “open it up” for a bit. Good for me, because I’d hate to waste a good tailwind that’s always there!

At rest stop one, I spent some time catching up with my former coworkers (who sponsored the rest stop) while waiting for the rest of the riders to arrive. Then after leaving, the motorcycles gave me the “AOK” to leapfrog ahead again, while they covered the rear. It was a good spot in the route to do so, as it was the beginning of the hills, which tend to spread out the riders quite a bit. I was able to chat with some of the riders as I passed, making a mental note of who was playing catch up after a late start, as well as taking note of those who might have problems later on completing the ride.

Luckily it wasn’t as hot inland as originally expected, thanks to some cloud cover which lasted all the way to rest stop two. One of the “red riders” (a rider who has diabetes) had considered throwing in the towel and calling for a SAG (support vehicle), but he was a real trooper and decided to press on.

After that stop, there would be no leapfrogging, as we were almost at the bike path section, where I would be the only one who could make sure the last two riders were OK. But first, they had to make the left turn from Ortega onto Avenida Siega. This was a hard to see left turn with no traffic light, on a two lane road with the possibility of continuous traffic in both directions. Add rider fatigue to the mix, and you have the ingredients for the biggest turn of concern in the route.

We made it to the beginning of the bike path portion, which had a couple of tricky turns where we were not able to put up signage. I split the distance between the two riders in the rear, alternating between moving ahead to give directions to the front rider, and then dropping back to make sure all was OK in the rear. Finally we got to a point where I could tell the front rider, “turn left after crossing the bridge and it’s a straight shot to the beach”, and then I could move behind the last rider and stay there full time.

Unfortunately, I wasn’t able to keep net control up to date along the bike path part of the ride. My bicycle mobile setup was a rather simple one, with a handheld radio in the back pocket and an earpiece/microphone combo with a remote push to talk button. Still, that was an effective setup when hitting a radio repeater on a 5600’ mountain peak during most of the route, but the bike path was in a valley along San Juan Creek, so short of mounting an antenna on my helmet, I was out of luck.

Soon we were back on the roads and into rest stop three. After that, the bulk of my duties were done, as the motorcycles could cover the rest of the route. But as I neared the finish, I stopped to check on a rider walking her bicycle. She said that she just had some leg cramps and was otherwise OK. I assured her that after cresting that last hill just a few yards ahead, she could coast all the way to the finish.

Overall, while there were a few minor hiccups that always seem to happen on a first year ride, this was still a very successful event, with about 300 riders and $88,000 raised. Most importantly, it was a very safe ride, with no injuries reported. I’m looking forward to working with MARC as a bicycle mobile for future events!