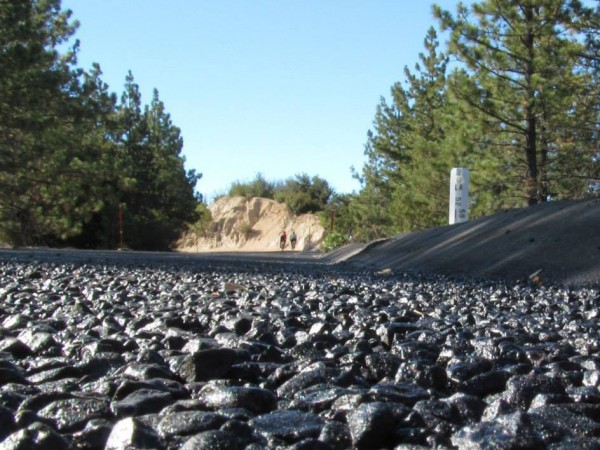 [UPDATE 10/12/12: Per the comment below forwarded from the Caltrans District 7 bicycle coordinator, the “chip seal” pavement is temporary, and a top coat of pavement will be applied before the project is completed sometime in November 2012. The original post below has not been edited.

UPDATE 8/26/13: Near Wrightwood, the chip seal has smoothed out (a bit) with use. But then they recently came back and applied fresh chip seal to the shoulders. Furthermore, that fresh chip seal on the shoulders as been poorly applied, with many dips and valleys big enough to catch road bike tires, making it unrideable. Luckily I haven’t been harassed for riding in the (somewhat) smoother pavement in the travel lane. Photo at the bottom of this post.]

I have a weekend cabin in the town of Wrightwood. One of my favorite bicycle rides is heading out my front door westbound onto Highway 2 and back – until yesterday. The highway has been resurfaced with a chip seal (photos below) from the Los Angeles County line, ending 13 miles west at Dawson Saddle. If the “road work next 60 miles” sign in Wrightwood is any indication, than this is planned for the remainder of the rural part of the highway.

Chip seal makes for a noisier ride in a car, but for bicyclists it’s a much harsher ride compared to smoother blacktop. Although I haven’t ridden a motorcycle in a long time, I can’t imagine motorcyclists would be happy with this either.

I realize the choice of chip seal was probably a cost savings measure. It’s not an uncommon treatment for rural roads in other parts of the country, especially in locations where there’s a large number of low volume roads to maintain. But this road is in an area where there’s no other through roads. In addition, this road sees a significant amount of motorcyclist and bicyclist tourist traffic outside of the winter months. I can’t imagine that the bicycle racers from the Tour of California – an event which brings tourism dollars to the area – would enjoy riding on 40 miles of this if they were to repeat the route from Stage 6 in 2010. Those same 40 miles also form part of Adventure Cycling’s Sierra Cascades bicycle touring route.

Furthermore, they’ve really done this on the cheap and only resurfaced to the fog line, which can pose additional hazards to bicyclists.

I’m sure what’s done is done this time around. Let’s just hope that Caltrans will reconsider the choice of chip seal the next time the road is due for a resurfacing.

Below are some photos. 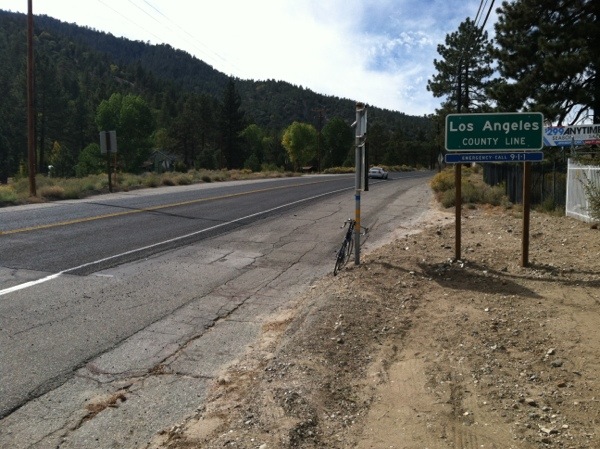 Here’s a closeup of the pavement. New chip seal. 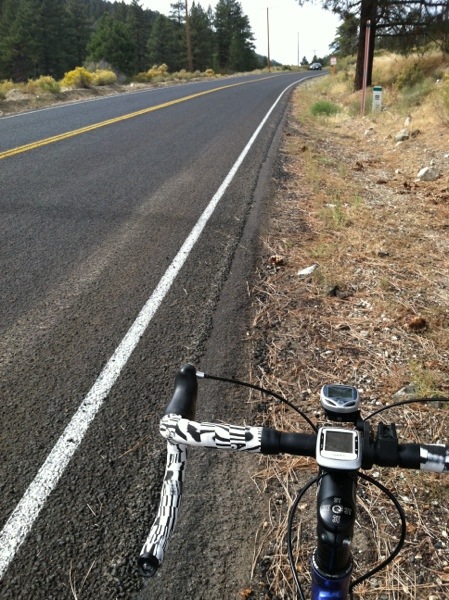 The fresh chip seal continues all the way to Dawson Saddle, 13 miles west of the county line. 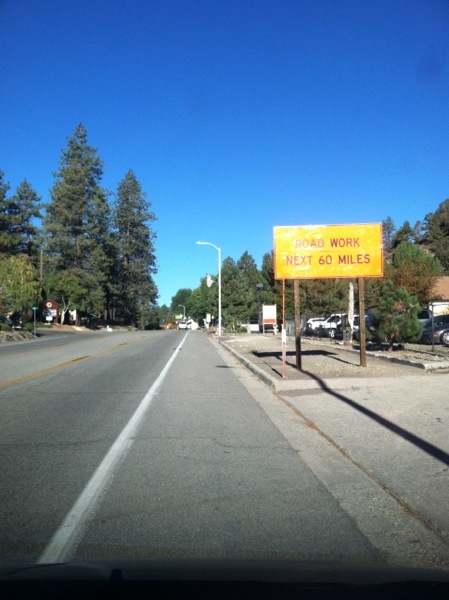 Just before the turnoff to Big Pines Highway. Note the abundance of loose rock. 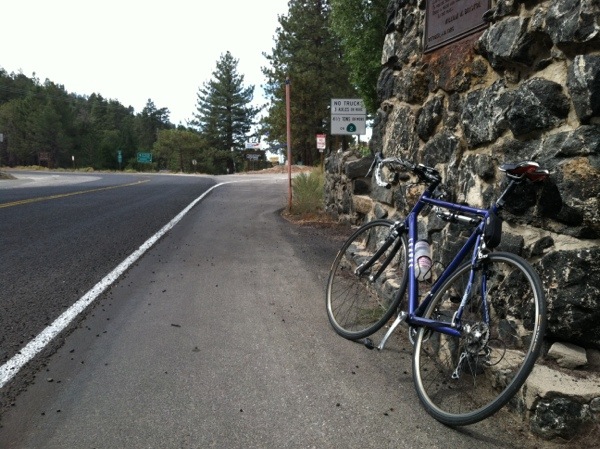 Approaching Blue Ridge. Steep drop off from the new to the old pavement. 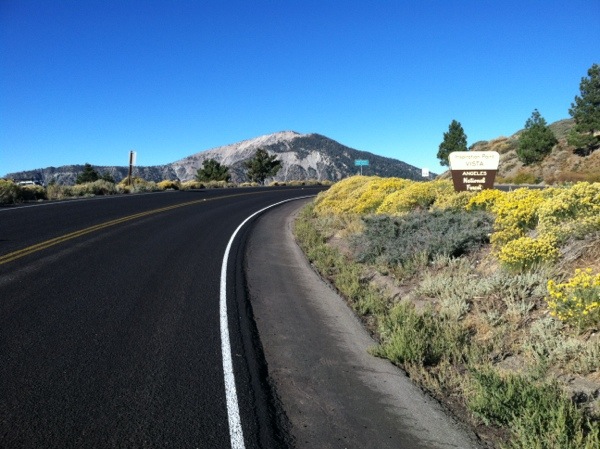 The last two paving jobs have repaved less of the highway each time. 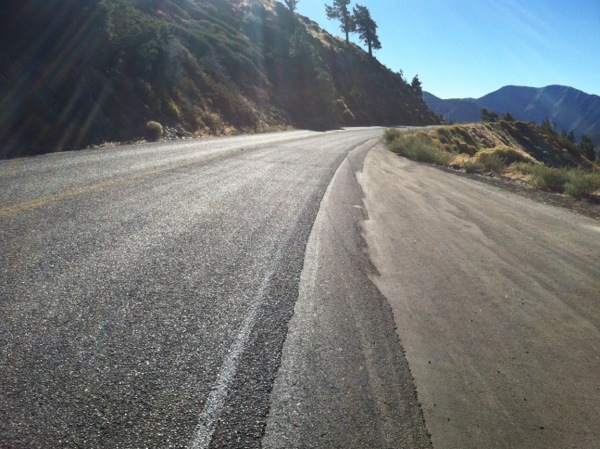 Here’s a closeup of the above pavement. 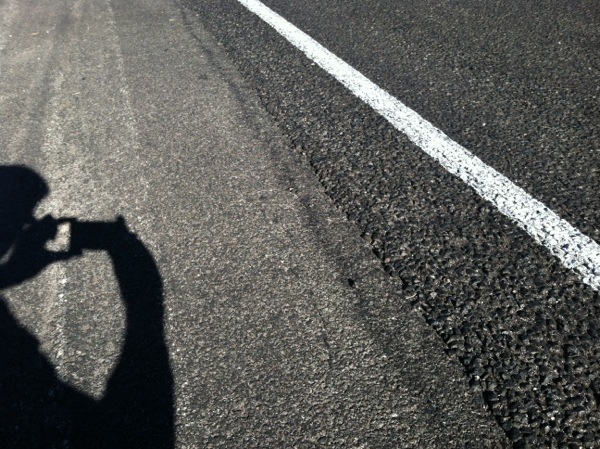 UPDATE 8/26/13: The pavement in the travel lanes has smoothed out a bit, but then they came back and paved the shoulders. In many places the paving is inconsistent, with cracks and sharp dropoffs, making it unusable by bicyclists. 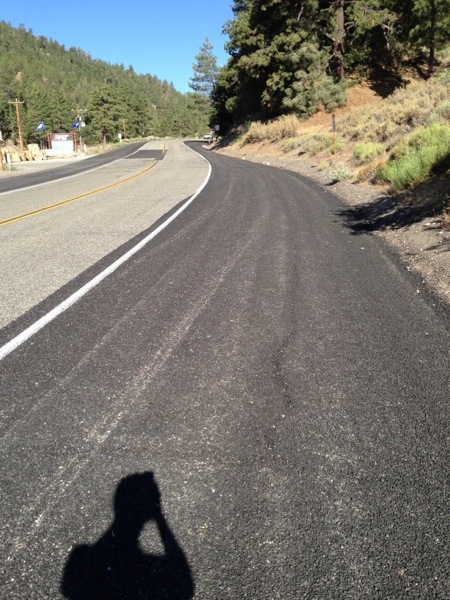