I’m looking to upgrade to the iPhone 5, mainly for the 4G LTE capability. I’m leaning towards the Verizon model, mainly because their service has fewer dead spots and less network overload in my area.

For me, the major downside of going with the Verizon iPhone 5 is that their 3G coverage is generally slower than AT&T’s. This is an issue at my mountain cabin, where there’s a moratorium on DSL connections and I have to rely on 3G service, and there are no immediate plans for 4G LTE upgrades.

The Verizon iPhone 5 is already SIM unlocked, so I no longer need to keep the iPhone 3G phone around for overseas travel. So I was thinking of moving the iPhone 3G to the mountain cabin, getting pay as you go service with an AT&T MVNO, and using it at a poor man’s mobile hotspot. I got an Airvoice Wireless SIM for $0.99 on Ebay, and then added a $10 refill which is good for up to 90 days. The data rate of $0.33/MB didn’t sound too bad at first, but after it cost $0.22 simply to run the Speedtest app, I quickly realized that wasn’t a cost effective solution. Well, at least I could pop the Airvoice SIM into the iPhone 2G at the cabin and keep it as an emergency phone for $3.33 a month.

During this process, I had done a restore on my iPhone 3G, so that wouldn’t have any personal data left on it. I was going to write a whole long post about how I started off with my old iPhone 3G unlocking procedure using Redsn0w 0.96b5 and a custom unlockable 4.2.1 firmware, followed by an update I learned about later to use Redsn0w 0.9.6b6 and SAM in order to avoid activation issues.

But unlocking the old iPhone 3G was actually easier than that. I had heard that AT&T was starting to do unlocks for iPhones out of contract, though I am no longer an AT&T customer. Though recently I heard they had an online unlock request form for current and former customers. I filled it out on Sunday night, and Tuesday morning I got an email saying my phone was unlocked. AT&T says you have to do a restore, but there’s ways to get around that.

Edit 1/19/13 – I upgraded to the Verizon iPhone 5, here’s proof that it’s SIM unlocked out of the box, I trimmed a nine year old (!) Virgin Mobile UK SIM, and it works fine here in the USA! 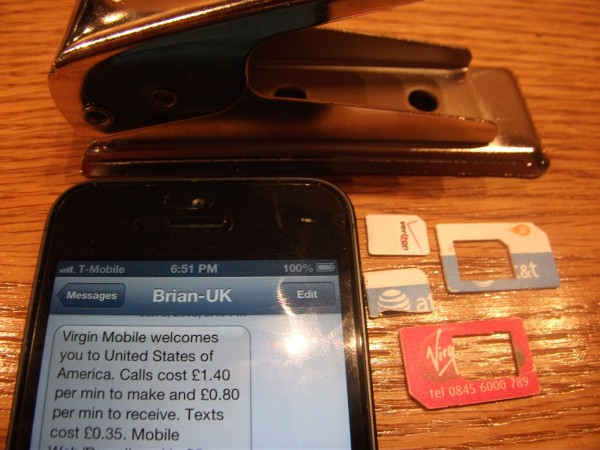