I’m off to the Oregon coast soon for a bicycle tour in July. With this post I am now in “trip mode” and so now the blog posts will automatically update Facebook and Twitter  (using Simple Facebook Connect and WordTwit) for ease of updating on the road.

I couldn’t resist making last minute changes to the bike close to the departure date. In this case, I installed a new handlebar stem. Although many of the other components have been upgraded, it’s nice to have an “original” looking stem in order for the bike to have the same look and feel as its early 80s vintage. Plus, I had a recent professional bike fitting and found that the old stem left me too stretched out. 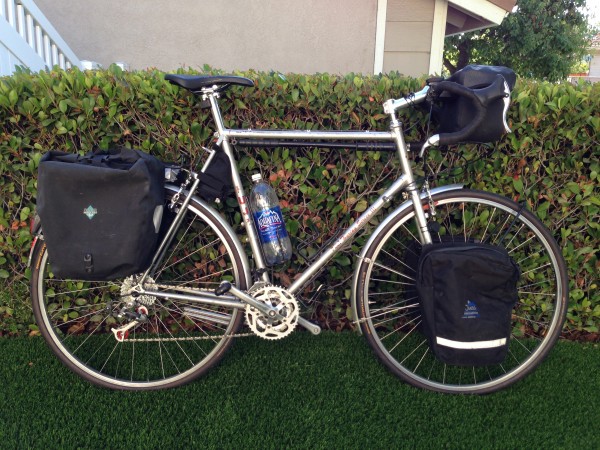 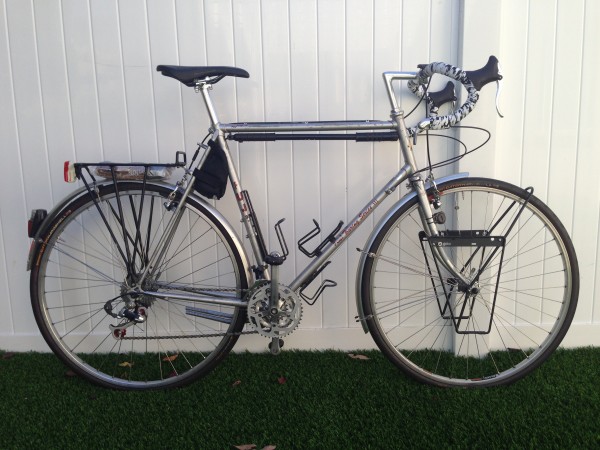 But then I blew any chance of the bike looking completely retro and installed a RAM mount on the handlebars for a video camera. More on that later. 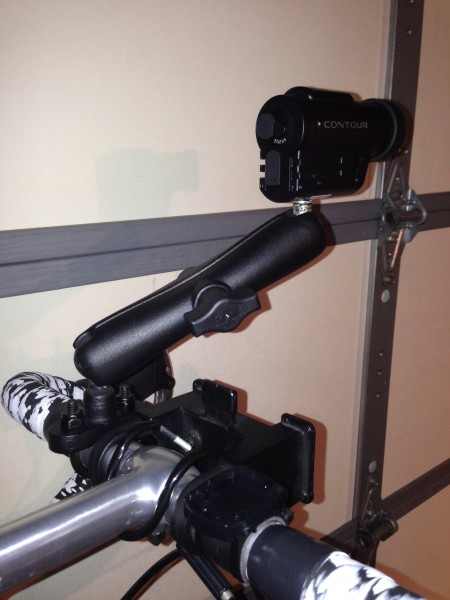 Now onto the ritual of what to take. I’ve been through this enough times. It involves starting with the list, then asking myself, “do I really need to take that”, removing some items, then with the remaining pile still too big, I ask that question again and shrink the pile some more. The tennis shoes are bulky, but that is one luxury I’m not going to live without – especially since I am recovering from metatarsalgia, and it hurts to walk barefoot or in sandals. It also pains me to have to take the full rain gear, but it could be necessary, even in the driest month of July. Maybe I’ll leave it behind at the last minute if a high pressure system parks itself off the coast, in that case the red windbreaker would be just fine for light rain showers. 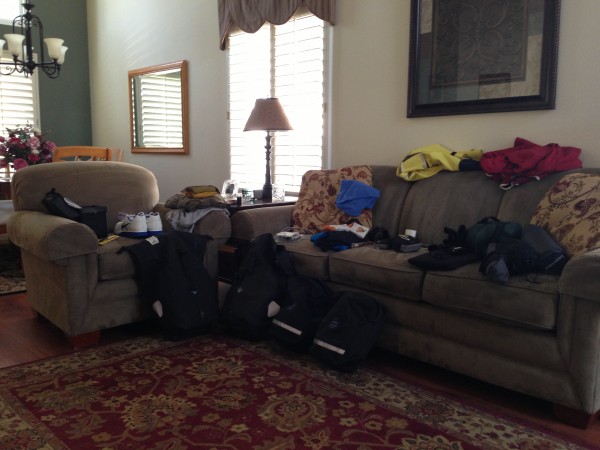 I had succumbed to the temptation to get solar panels to put on top of the unused space on the rear rack. I found some reasonably priced ones from Instapark. I couldn’t decide between the smaller Mercury 4S or the larger Mercury 10M. So, in the end, I got both. 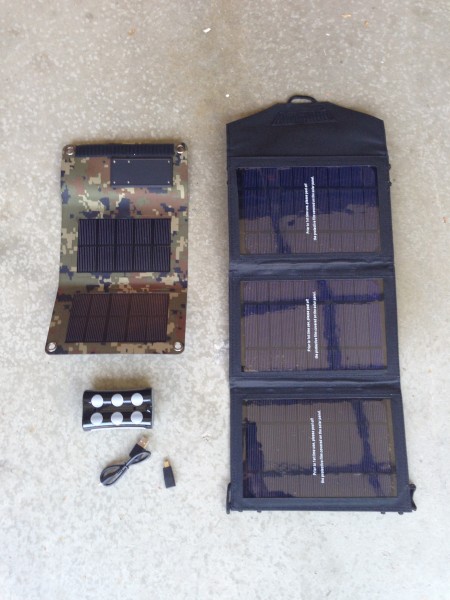 But I still had to decide which panel would go on the bike for this trip. The larger one would fit crosswise on top of the rack and panniers, but that would block access to the panniers. Since my charging needs are light (Garmin and iPhone), I went with the smaller one. 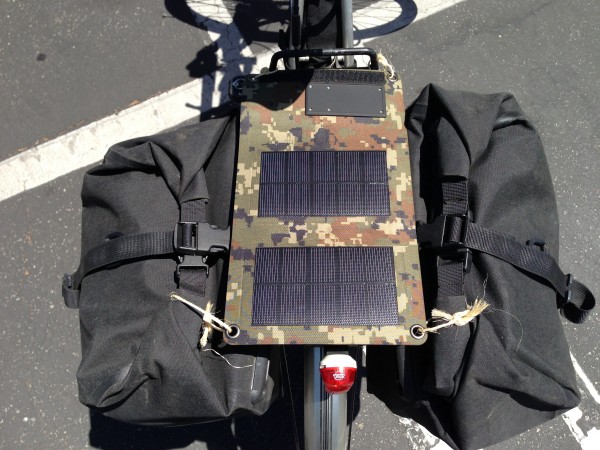 I devised a clever mounting system in order to maintain access to the panniers. The front part of the panel is tied to the rack, with the back is secured to the panniers. That would have been a lot harder to do with the larger panel. (I’ll replace the twine with something better for the actual trip.) 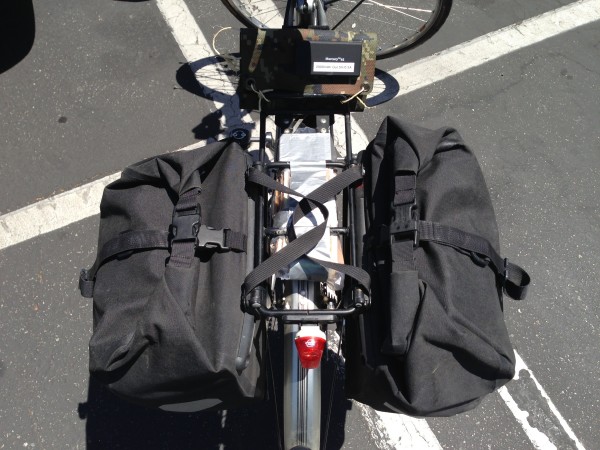 And then it was off for a shakedown ride. I did the first half with the camera pointed forward. 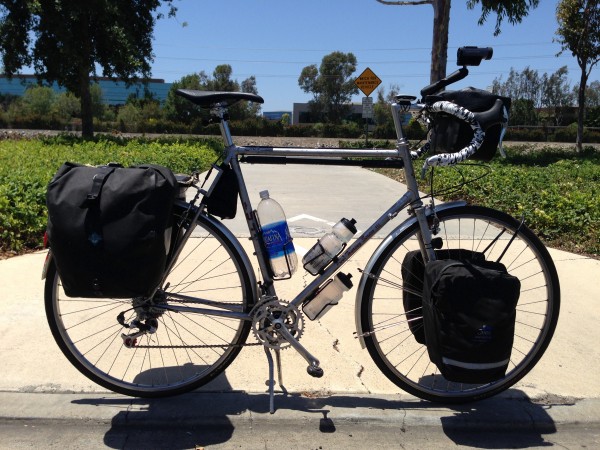 And then I did the second half with the camera pointed backwards (under the seat, hard to see). 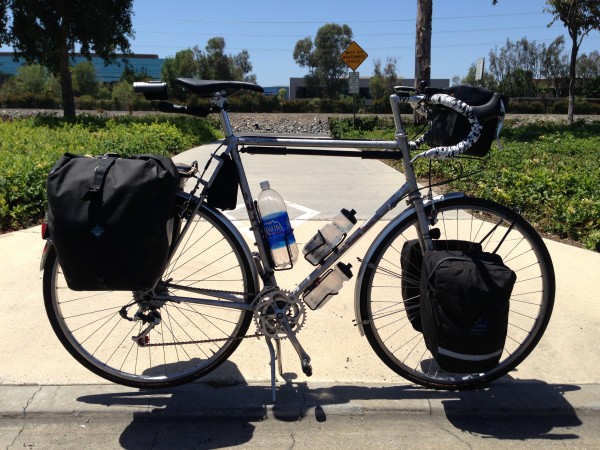 This shakedown ride reminded me that this bike rides a lot better loaded than unloaded! The bike itself worked fine, so this ride was really more of a test to see if the solar panel would stay put (it did) and not flap in the wind, as well as to see if the camera RAM mounts held tight (they did). Since there were few others on the path, the video isn’t worth sharing. Suffice it to say that video looked good on the smooth pavement, but the jarring was excessive on the concrete underpasses. I will have to use a helmet mount instead for rough roads.

One surprise was that the old wireless bike computer (“speedometer”) was acting a little flaky, with mileage readings all over the place. I’m simply going to remove it from the bike, as I will have my Garmin Edge 500.

Finally, since I had everything already in the panniers, I took the opportunity to weigh everything.

So that makes for a total of 70 lbs. I believe it was closer to 80 lbs when I bicycled across the USA back in 2001. I hear a typical gear weight is about 35 lbs, +/- 10 lbs, so I’m a bit below average on the gear, though the bike itself may be a bit above average. If I didn’t have camping gear, I’d have a much lighter setup, as I’d use my regular road bike, ditch the racks, and use my Carradice saddlebag.

The next step will be to get the bike and gear to Oregon, while I first make a side trip. Off to get a bike box now. More on that in another post…