We were off and running for my final day of the trip! 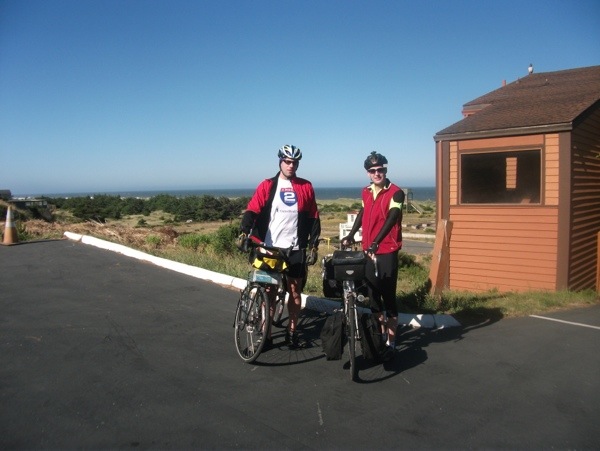 But, first, I left my Subway sandwich in the refrigerator at my hotel. Thought I’d see how fast a loaded touring bike would go uphill… 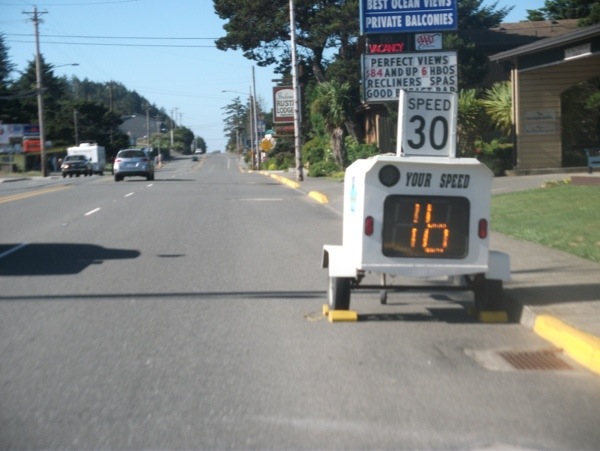 Leaving Gold Beach, there were nice view of the, um, beach. 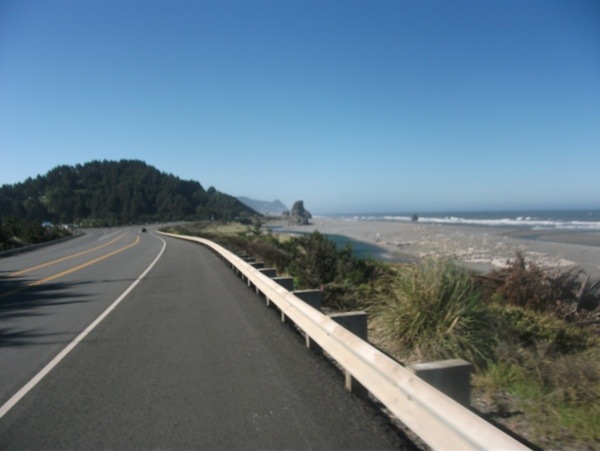 But then it was back to business with one of the biggest climbs on the Oregon coast. Though it wasn’t too bad with that tailwind pushing us up. 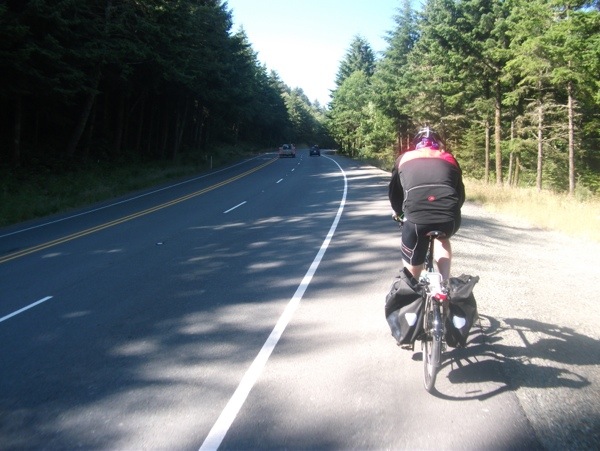 The reward for going up are the vistas below. 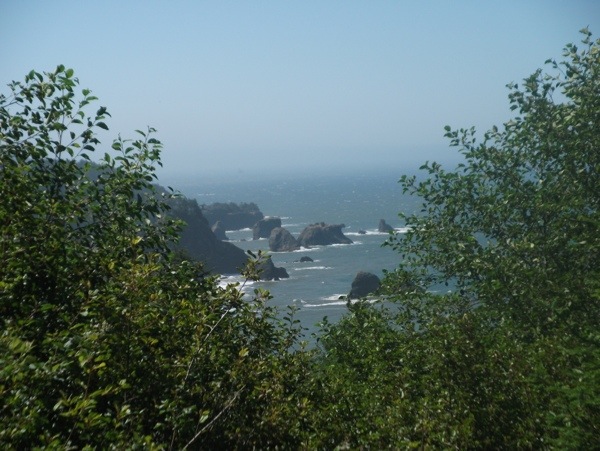 Finally, we were rewarded with a downhill run. 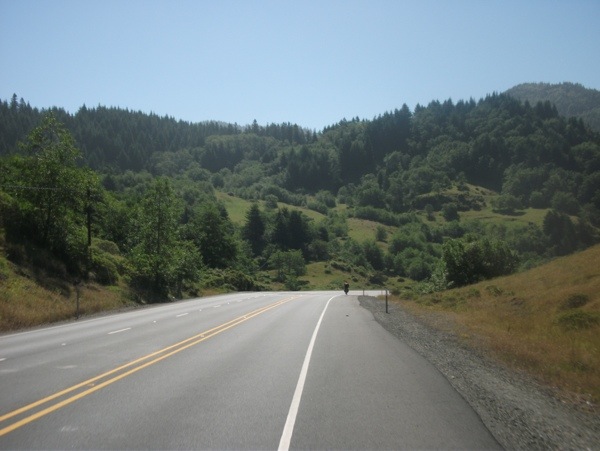 Then it was close to the coast again along the Samuel Boardman Scenic Corridor. One of the turnoffs featured the Natural Bridges Cove. 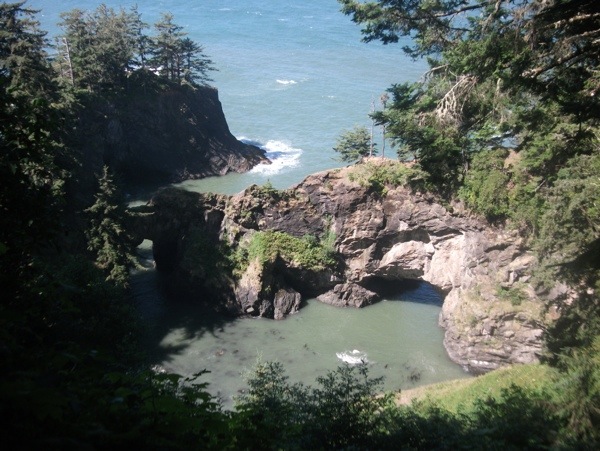 Then we saw some other cyclists heading northbound. We pitied them at first for going into the headwind, but then we figured out that they must have been part of a supported tour. So maybe they were the ones who had it easy! 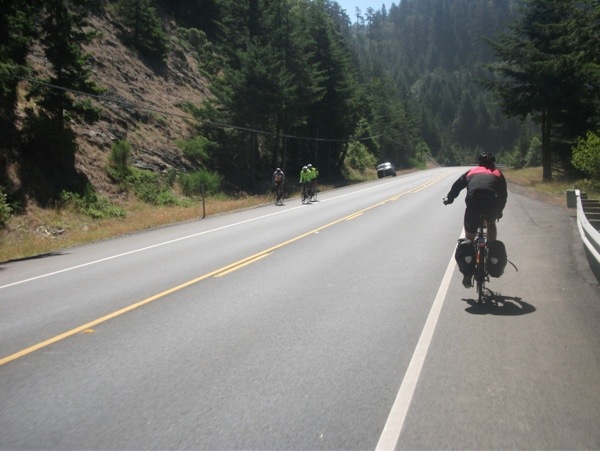 There were some nice beach views. 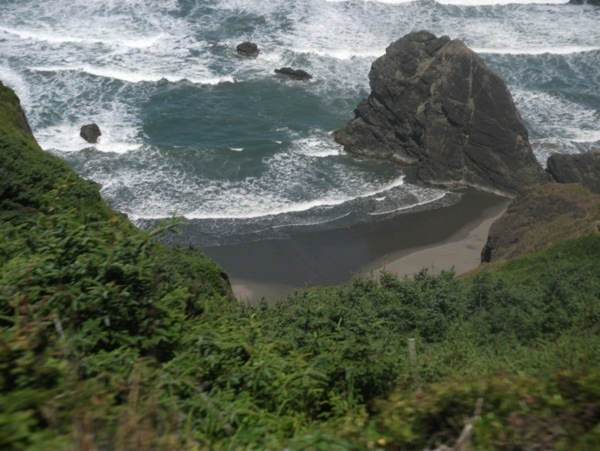 And some more nice beach views. 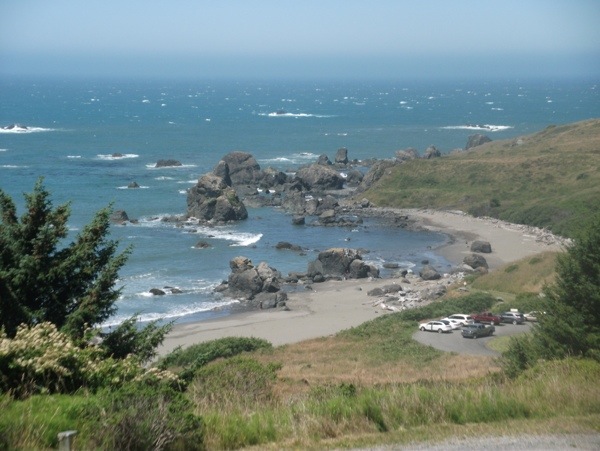 As we approached Brookings close to noon, we got our first hint of “bad” weather – fog. 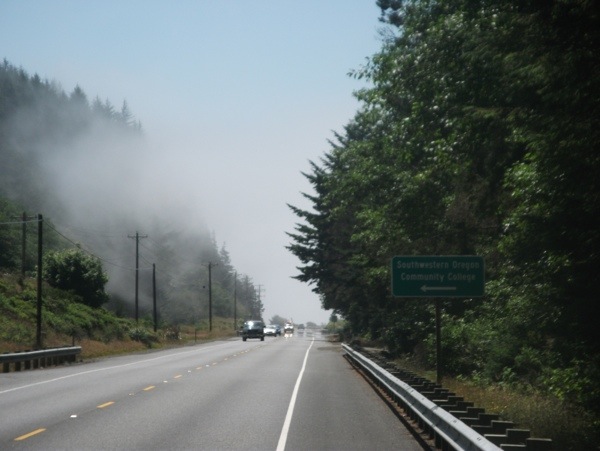 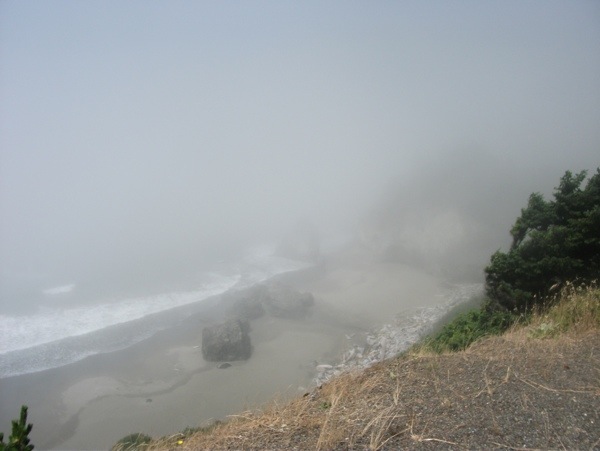 Though the fog burned off once we got to Brookings. We stopped by a beach in Harbor to have lunch. 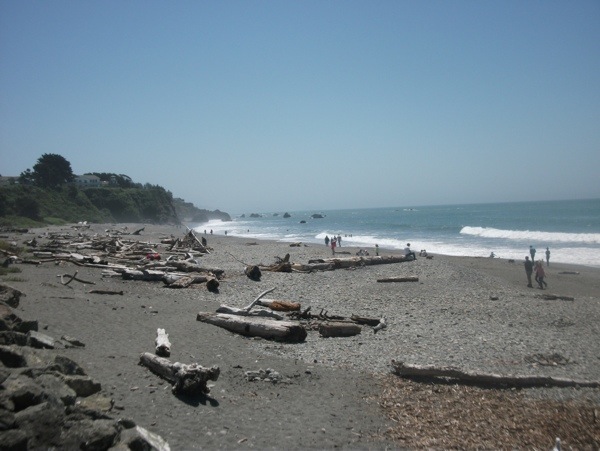 South of Brookings and Harbor, the route was on Oceanside Drive. Then we turned onto US101 in order to cross into … California! 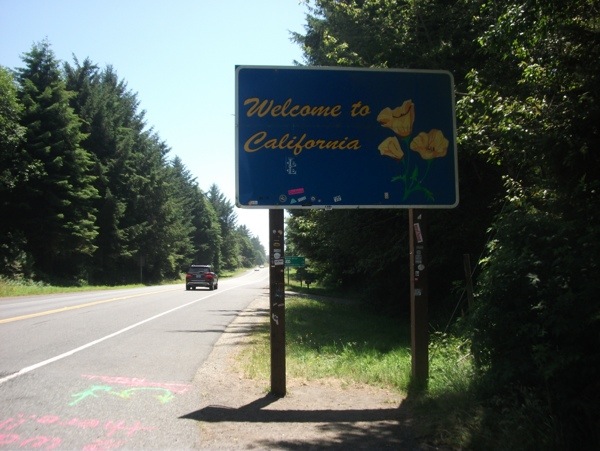 Though apparently the agricultural inspection station isn’t open very much these days due to budget cuts. 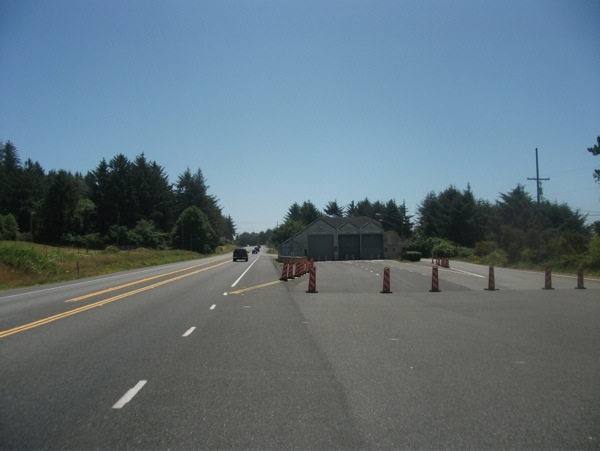 Meanwhile the tailwind from the north had shifted to a headwind from the south, and riding through farmland in NoCal exposed us to it even more. So what was going to be an easy cruise for the last 20 miles into Crescent City was more of a slog. Though we stopped at a farmer’s market to get some fresh fruit, the lady working the stand used to live in SoCal (Long Beach) and moved up north. 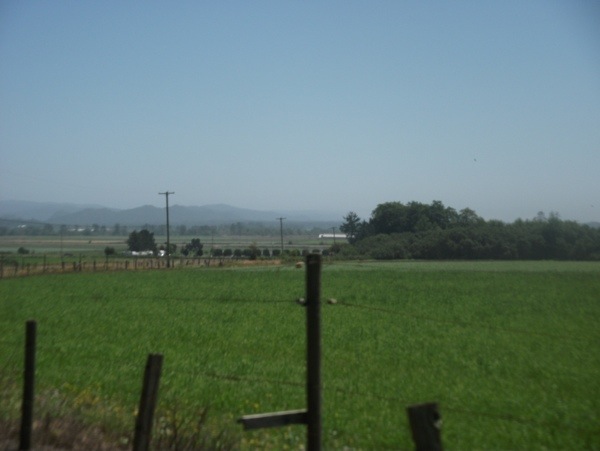 The route rejoined US101 briefly in order to cross the Smith River. Similar to the bridges in Oregon, there was a sign telling bicyclists to press the button about 200 feet ahead in order to activate the flashing lights. But halfway in between the sign and the push button, there was a small sign which said “bicycle loop” along with a white bicycle stencil on the pavement. It’s purpose was not clear from the signage, but I could venture a guess. So as Clint was about to press the button, I had rolled over the loop and got the lights to flash. 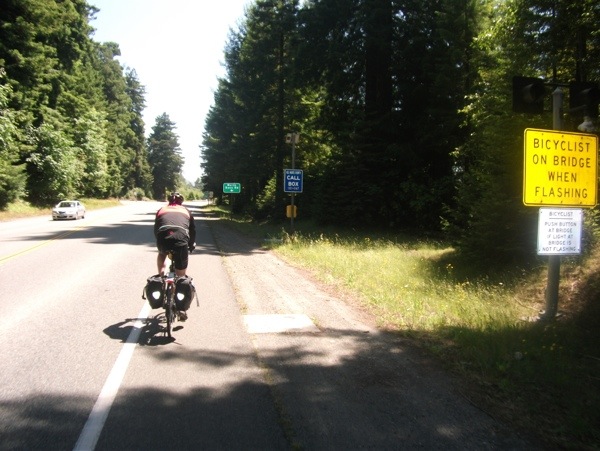 We continued the farmland slog until we finally reached Pebble Beach Drive. No, not THAT Pebble Beach, but still nice. 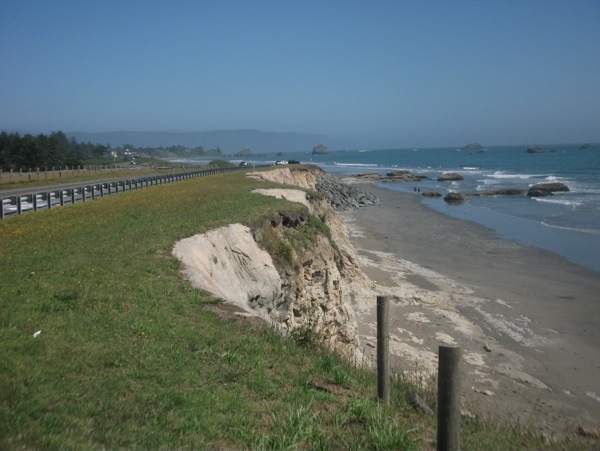 Having been here before (where I started my last tour to San Francisco), I assured Clint that this was the prettiest part of Crescent City. 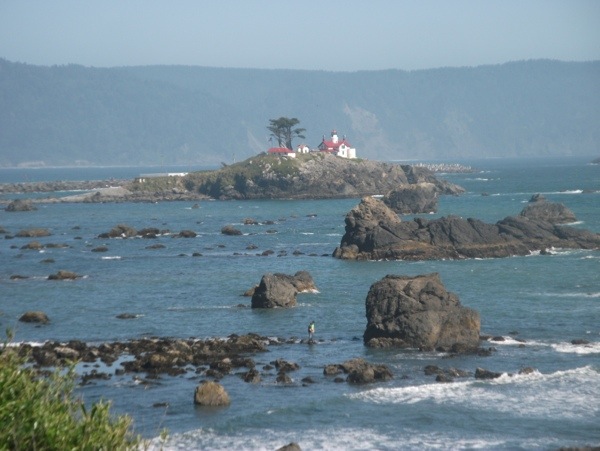 So not only did we finish the “official” Adventure Cycling Section 2 map, but we rode a few blocks further south, so I could officially finish the ride where I had started the previous ride two years ago. 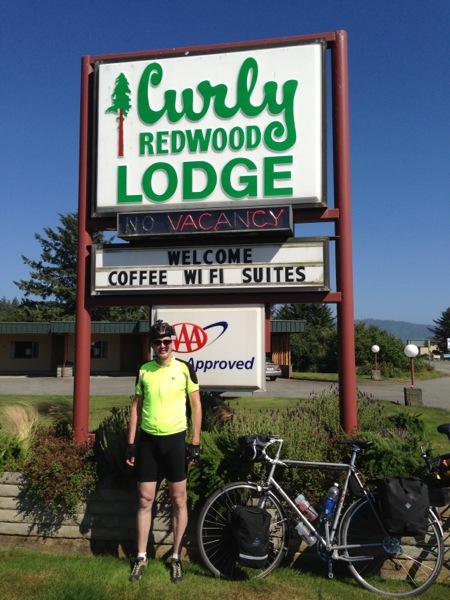 Clint and I had said goodbye and parted ways – he to his hotel and me to the airport. On the way back to the airport I saw the two ladies we met back in Bandon – they were on their way into town. They were looking to find somewhere to camp, since I mentioned that the alternative is the big hill out of Crescent City late in the day. There’s no hiker/biker campground, so I hope they found an RV park or similar place.

I had toyed with the idea of getting an earlier flight home, but with today’s crash landing in San Francisco, all of the commercial flights in and out of Crescent City were shut down. Even the terminal building was closed and locked. 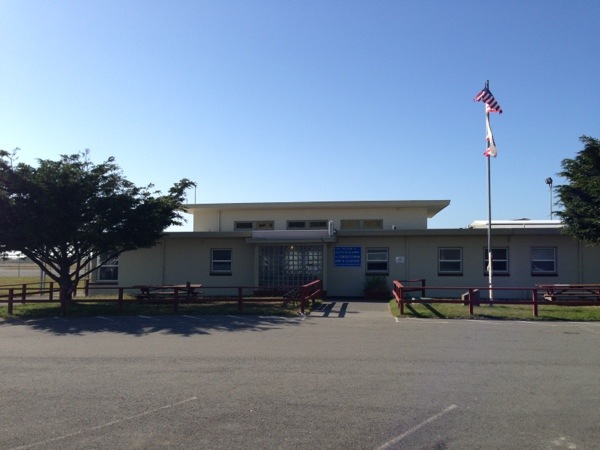 So it was onto Plan “B”, which I will report on later. 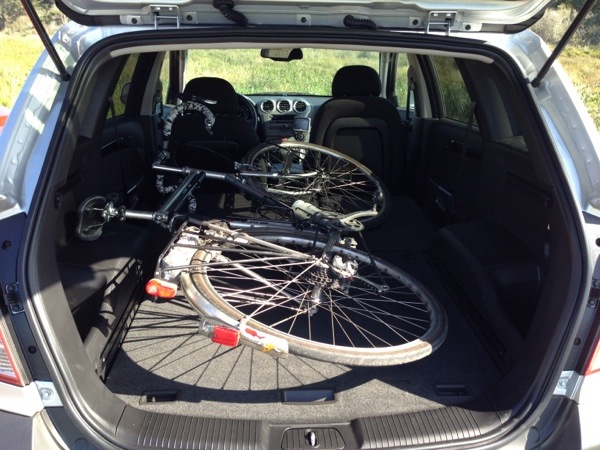