One last update before I turn off the auto-posting to Facebook and Twitter. Having just cycled the Oregon coast, as well as the Northern California coast two years ago, here’s a wrap-up with various thoughts.

Getting the Bike to the Start or from the Finish

Boxing the bike and taking it on the plane seems to be the most common option, though I did not do that for either of these trips. In many cases taking the bike on the plane has also become more expensive than the alternatives.

Amtrak Express has to be the best kept secret for shipping the bike between train stations (unaccompanied, while I travel via other means). I paid $49 to ship it from the Los Angeles area to Portland, plus $15 for the box, and it took just a couple of days to get there. The best thing about Amtrak Express (besides the price) is that the box is so big (70″ x 41″ x 8.5″), all you have to do is remove the pedals and handlebars, then roll the bike into the box. (Well, you may have to lower the seat if you’re as tall as me.) You’ll have to call the toll free number on the website to make sure the service is available at your desired cities.

I’ve had good luck shipping the bike via FedEx. You can ship to a willing bike shop or hotel, or you can also ship to a FedEx Office location, and they will hold for pickup. You’ll need to find your own box from a bike shop. The bike box sizes appear to straddle a shipping cost break point (more info at Jim’s site), and if you’re in a small town you might not have much of a choice in what size box you can get. In my case, the seat tube protruded from the box a bit, but I still got the box taped shut, and it survived the trip home. 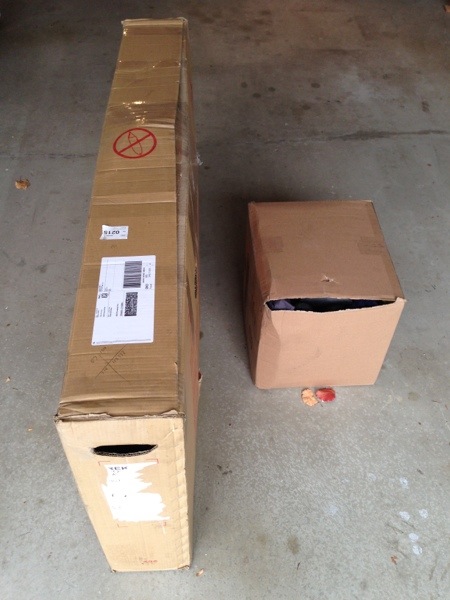 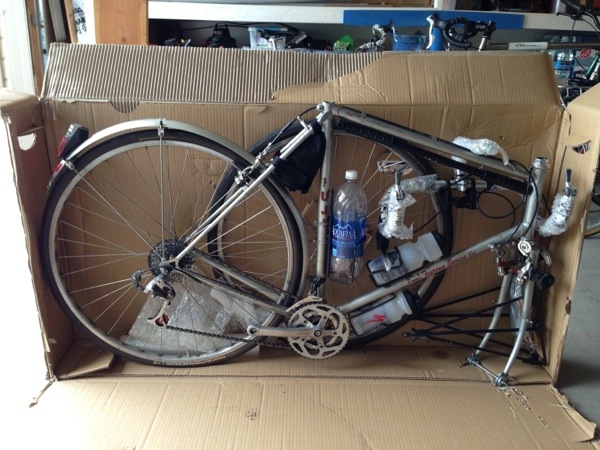 Portland – The airport is very convenient for bicycle tourists. If you flew with your bike, you can put it together in the bike assembly area, which is adjacent to the light rail to downtown. In my case, I had to pick up the bike at the Amtrak station and the rest of my belongings at the FedEx office location downtown – both of those locations were easily accessible by light rail. The city of Portland website shows a few routes for riding to the coast. Instead I opted to take the bus to Astoria. Book it in advance on the Amtrak site (to ensure there’s room for the bike) as a trip from PDX-ART, and don’t forget to add the bike for an additional $5. The bike can be carried boxed or unboxed. The Amtrak oversize baggage claim door is right next to the Amtrak bus stop, so I left my bike in the box for the bus trip.

San Francisco – This is also a convenient start/finish point because it is on the route and there are a number of transportation options. Though I can’t speak to any of them because I’ve only cycled downtown to pick up a one way rental car to return home to the LA area.

Crescent City, CA – I started my Northern California coast tour and finished my Oregon coast tour here. It’s not the easiest place to get in and out of, there’s United Express to/from SFO and the Greyhound bus. The planes are too small to carry boxed bikes. That wasn’t too much of an issue for starting my tour there, as I shipped my bike to my first night’s hotel. But ending a tour there is more problematic, as you need to find a box to ship the bike home, and the only bike shop in town is closed on weekends. In the end, I had an extra day with a side (driving) trip to Crater Lake, and so I found a bike box in the Medford, OR area. (There is also a commercial airport in Medford which seems to have more flight options than Crescent City or Eureka/Arcata on the coast.)

If I could do it over again, I would have taken two weeks, flying into Portland and out of San Francisco, and cover both the Oregon and Northern California coasts at the same time.

I originally had planned to ride the Northern California coast as a credit card tour finding motels along the way, carrying camping gear as a backup. But I quickly found out that the towns with reasonably priced lodging were too far apart, while there were plenty of hiker/biker campsites, where a human powered traveler can arrive without a reservation and pay about $4 a night for a shared campsite. So after the first night, that turned into a camping trip.

The spacing of the towns on the Oregon coast felt a more conductive for motel to motel touring. They also have the hiker/biker campsites. So either way is good for the Oregon coast.

There’s two major resources: the Bicycling the Pacific Coast book and the maps from Adventure Cycling.  In addition, the Oregon and California departments of transportation (ODOT and Caltrans) have signed the routes in their respective jurisdictions, and ODOT has a coast route bike map. Most of the time the routes overlap, though there are some differences.

The book is very useful as a guidebook, and it shines if you’re camping the whole time, as it gives the route day by day with recommended campgrounds every night.  Though the Adventure Cycling maps are better for navigating and knowing the services on the way. In addition, the maps sometimes detour off the signed route to find more scenic or less trafficked routes, even if they are not strictly the “coastal” route. My preference is the maps, though I have the book at home and thumb through it before leaving on tour.

Note that my conclusions on the above are only based on Oregon and California. The routes diverge significantly in Washington, and I have no experience on that part of the route (yet).

I’m a big fan of having paper maps for my primary route rather than relying on a smartphone. Though with that said, the Maplets iPhone app was worth the money. That allowed me to download the ODOT Oregon Coast map and Portland bike and transit maps offline to my phone. Although these maps available in Maplets are also available directly from the various transportation agencies, it is nice to have them on my phone as a reference rather than carrying a stack of paper.

Oregon or Northern California – Which One?

Although I did say earlier to do both, I’m sure someone will ask which one I liked better. Oregon has beaches, scenery, and many small towns along the route. Northern California has the redwoods, and beaches too, as well as longer extended climbs, though some of the farmland stretches and towns left a lot to be desired. Both sections have their blah portions on somewhat busy parts of US101. I’ll give a slight plus to the Oregon coast, though the Northern California coast is not to be missed either.

Would I Have Packed Differently?

A reader asked if there’s anything I wished I had taken, or had taken but didn’t need. Well, after about 15 years of touring experience, I have the packing list pretty dialed in for my needs. The only new items were the miniature tripod (to take photos of myself, as that’s hard to do when alone), the helmet camera, and the solar panel. My main problem is not wishing I had taken something, but packing too much. For example, the solar panel turned out to be ballast since I had good access to AC power (and I had a battery pack for when I didn’t). That said, I’ve trimmed down my packing list quite a bit from when I first started touring – for example, I don’t carry cooking gear because I prefer going to local restaurants, and if that option is not available I carry a sandwich to go. I’ve learned that most of the time if you need something, you can pick it up on the way, or in the worst case, it can be shipped. I do have a few “luxuries” – for example, I carry tennis shoes even though my bike shoes are walkable.

The Pacific Coast is a great bicycle touring route. Great summertime weather, lots to see and do, and plenty of places to stay if you have camping gear. There are hills but no major mountains to climb. This is a very popular bicycle touring route, so even if you’re traveling alone, you’re not alone for long. The downside is that there are a few somewhat busy sections of road, including some bridges and tunnels. But overall, the positives outweigh the negatives, and this route is highly recommended.