My initial interest for mounting an antenna on the bike was to do on-bike radio support (I am a licensed ham radio operator) for charity bicycle rides.

I started with a Comet SBB5 antenna. It does not require a ground plane, giving me more flexibility with mounting options. I used a Minoura saddle mount bottle cage holder, but flipped it upside down. That gave a flat surface for mounted an aluminum plate. Then I drilled a 5/8″ hole and mounted a Diamond C101 cable assembly. 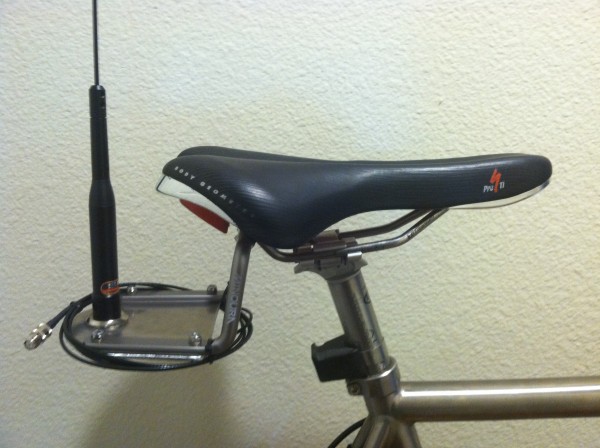 Here’s a better view of the whole antenna. 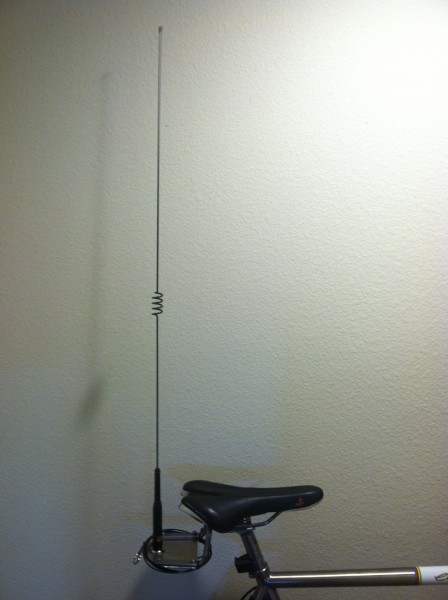 And a view of the bike. 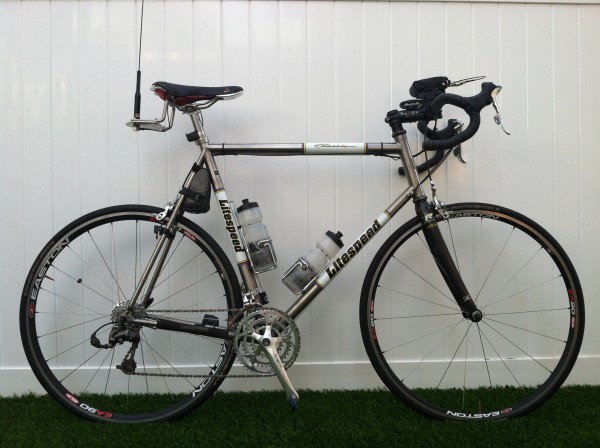 The thin coax made for easy routing along the bike frame. It was easy to roll the excess into a loop in the front. The HT (handheld transceiver) sits in a Topeak Handy E-Pack.

I used to have a headset, but that was cumbersome with the bike helmet. So the handheld microphone/speaker works just fine. And there’s enough room to be able to see the Garmin Edge 500 (which has since been upgraded to a Garmin Edge 800 with mapping capability). 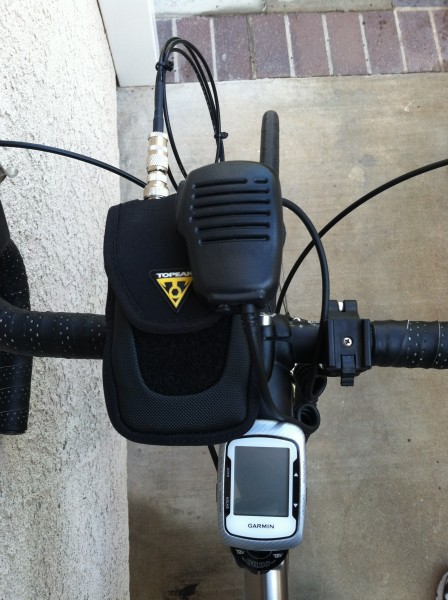 While the prior seatback antenna mount was pretty solid, this update was driven by not wanting to bump into the antenna when sliding back on the saddle. I also came to the realization that I don’t need to have the antenna on my fast road bike, since my bicycle mobile duties usually have me riding sweep. So I decided on a rear rack antenna mount for the second generation. I also have some other thoughts about using that for APRS tracking during multi-day self-contained bicycle touring in the future. 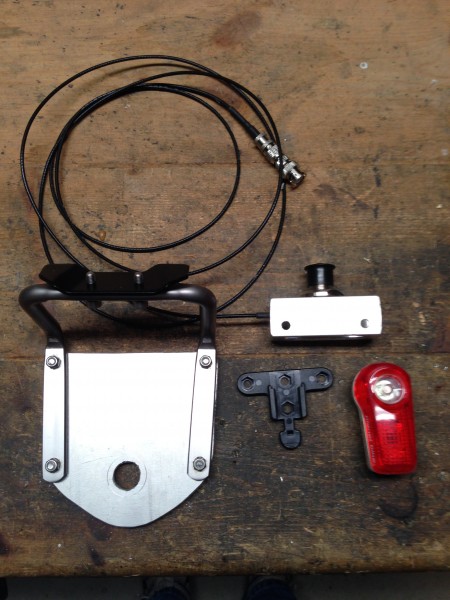 I used a piece of 1″ square aluminum tubing. I could have really gone bigger, but that’s the biggest stocked by the big box stores. Anything larger would require ordering online and paying $12 to ship a $3 piece of aluminum.

Since I used smaller tubing, I had to cut an opening in the bottom in order to get the antenna mount on to the bracket. That opening didn’t significantly compromise the strength of the setup.

The unused hole on the inside of the aluminum? I’ll get back to that a little later. 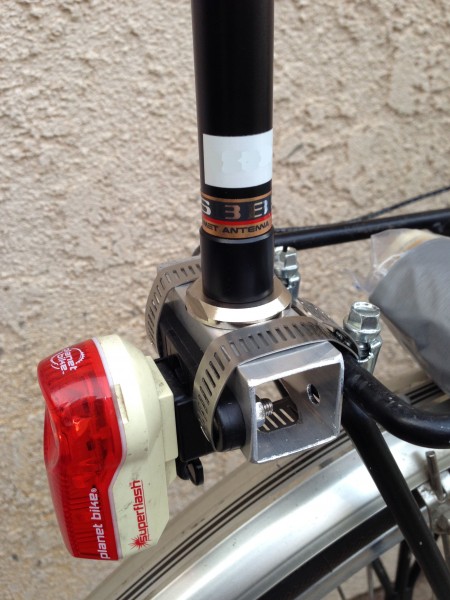 This gives a much more comfortable distance behind the saddle. 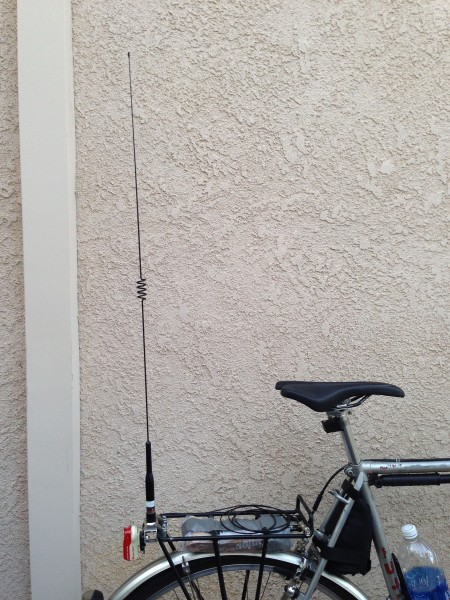 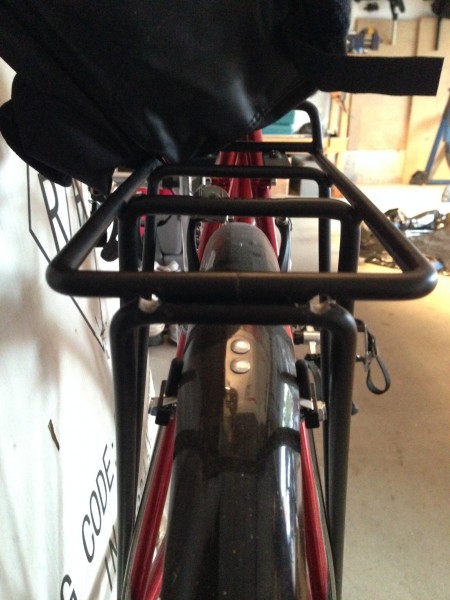 Just a minor update to this post to show the “cockpit”. Garmin GPS, radio in the Topeak bag, and the iPhone is for optional navigation. 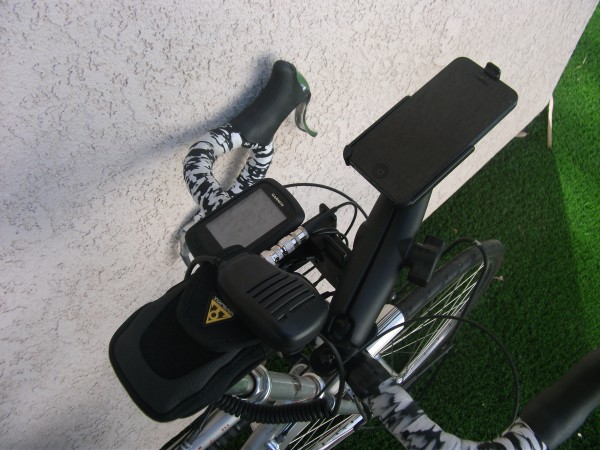 I got a new rack to replace the one with the holes, here’s an updated photo of the complete bike. 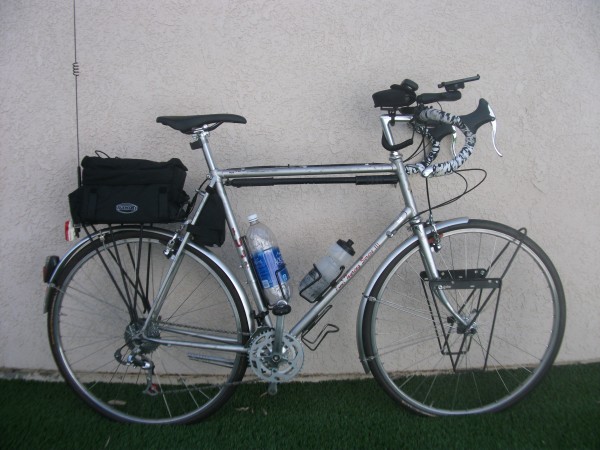