Before starting today, there was the route dilemma: use 101 as recommended by Kirkendall and Spring in the “Bicycling the Pacific Coast” book, or 112/113 as recommended by Adventure Cycling. The former uses a busy shoulderless section of 101, while the latter is ten miles longer. K&S seem inconsistent in their recommendations: they will often take an alternate route if it means less traffic, but they do not consistently do so. Whereas I find that AC is a little more consistent in their approach. I went with the AC route, figuring if I’m already going 70 miles today, then what’s another 10 miles?

After an early start, I zigged and zagged my way out of Port Angeles. I came upon Power Plant Road and asked myself, “where’s the power plant?” They must have been talking about the electrical substation. It’s a substation, not a power plant, sheesh!

Since it would be a while before the next services, I grabbed some water and snacks in Joyce. As has been the norm so far, the locals are polite and courteous, but not overly friendly. Haven’t figured that out yet. 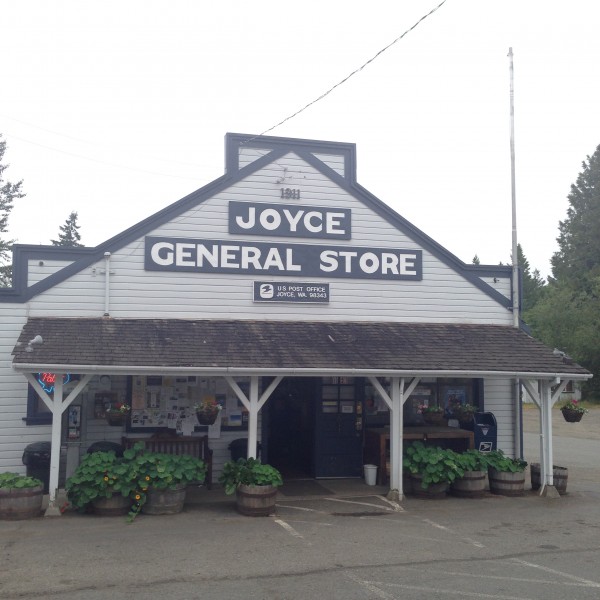 After Joyce it was a long haul out on 112. For a long while, 112 runs parallel to the Strait of Juan de Fuca, but not with a view of it. I waved to a cyclist who was coming out from a side road where there was camping, but then he disappeared from view. Then 112 dropped down to a secluded beach near the strait. So I had to stop and eat half of my Safeway sandwich. And that’s when the other rider caught up to me. 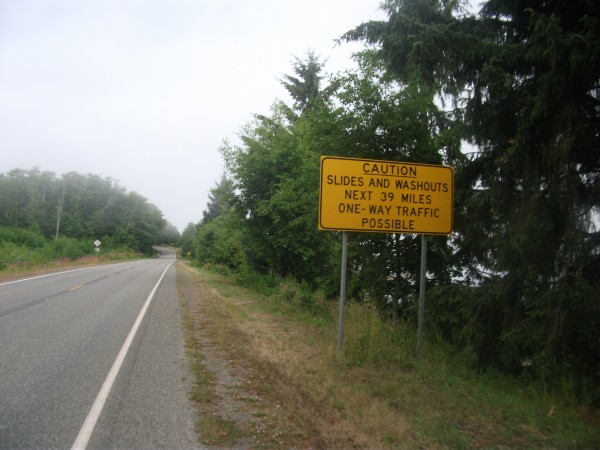 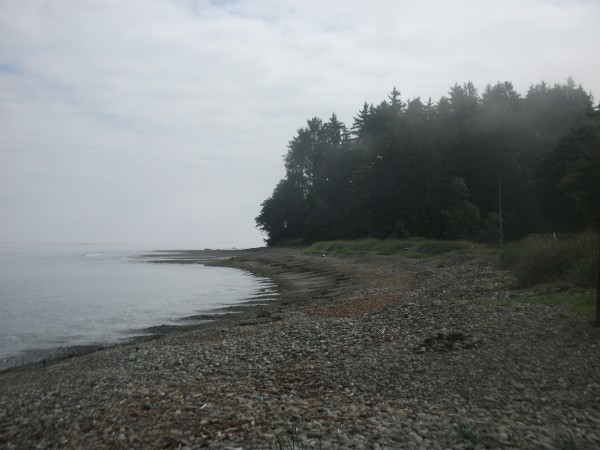 Bob and I chatted for a bit. He lives in San Diego and is riding the coast all the way home. He asked me how much weight I was carrying. He mentioned this was his first time bike touring. (Yeah, I knew that looking at his monstrous front and rear panniers and racktop bag.) He had the “book” (Kirkendall and Spring) but I shared my Adventure Cycling map with him, since it helped him plan ahead for the climbs. 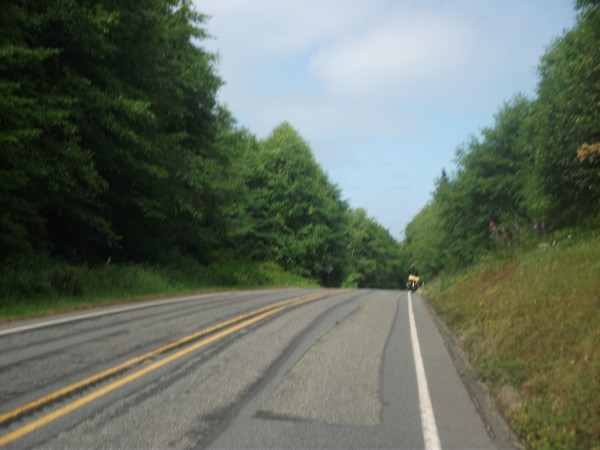 Although I was faster on the hills, Bob and I would play leapfrog for a while, since I made lots of stops on the way at places such as Pillar Point. And a stop to put on sunscreen, since there were actually clear blue skies for a while! 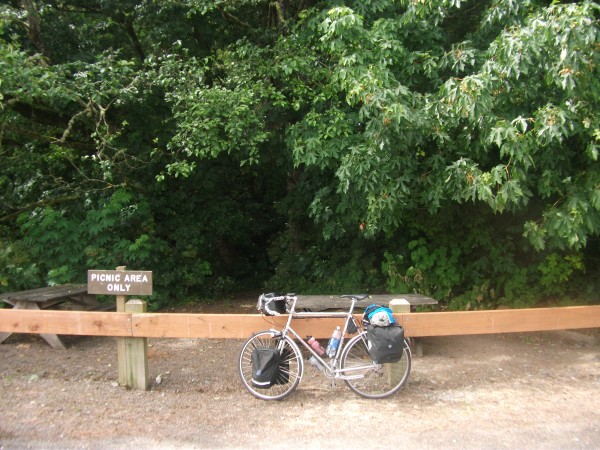 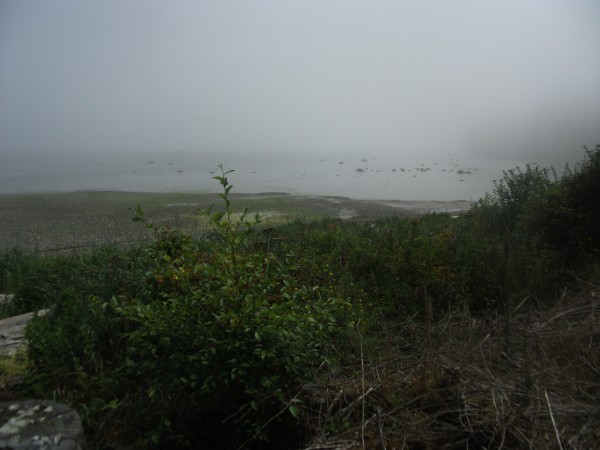 Bob and I parted ways, as he continued west on 112 to Neah Bay, while I went south on 113. And then the climb, 800 feet in about four miles. Not a huge deal on my fast road bike, but slow on my loaded touring bike. 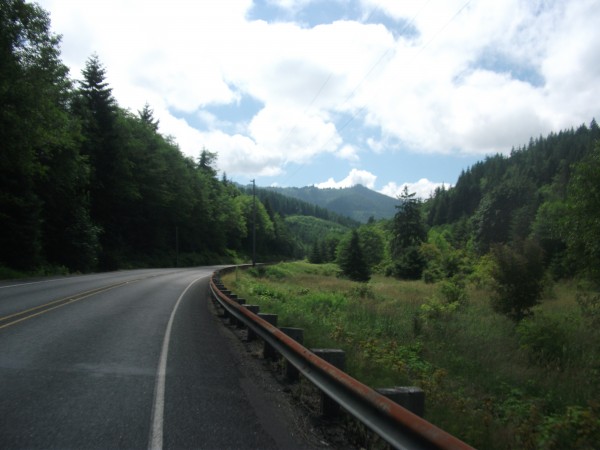 And then mostly downhill on 101. I stopped at the Lake Pleasant Grocery since it was the first services since Joyce, 40 miles ago. I thought the owner was grumpy because he didn’t say anything to me as he was ringing up my groceries. Then he pulled a plastic bag from his pile – that one happened to be a Walgreens bag – and so he pulled out the old receipt, threw it away, and then bagged my stuff. And then he gave me some advise on where I could camp. Turns out he was nice after all. He just didn’t have anything to say until the end. 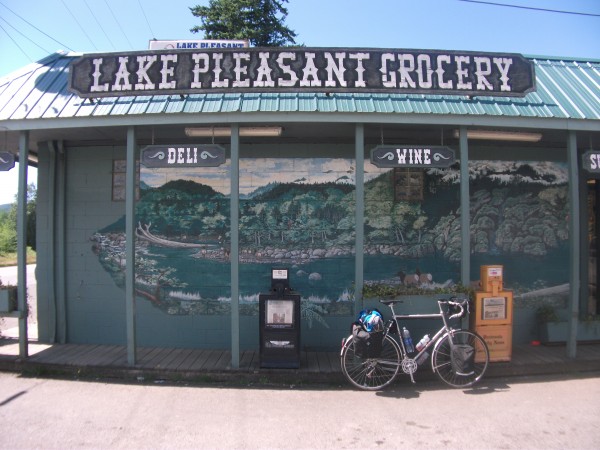 I turned off 101, which runs inland at this point, and headed down 110 towards La Push. It’s mostly downhill, but with the ocean breeze blowing in your face. Kind of like riding Laguna Canyon downhill towards the beach back home. 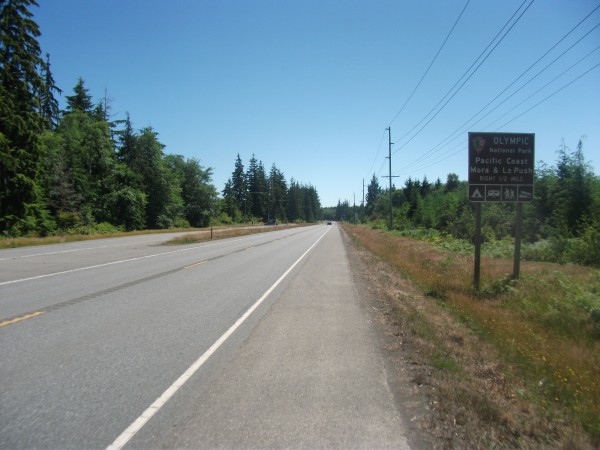 I stopped at the Mora Campground just a couple of miles from the beach. Plenty of sites to choose from. I got as close as I could to the beach, though it was still a 1.5 mile walk each way. But glad to be that far away, as it’s real windy and cold when you get down to the water. 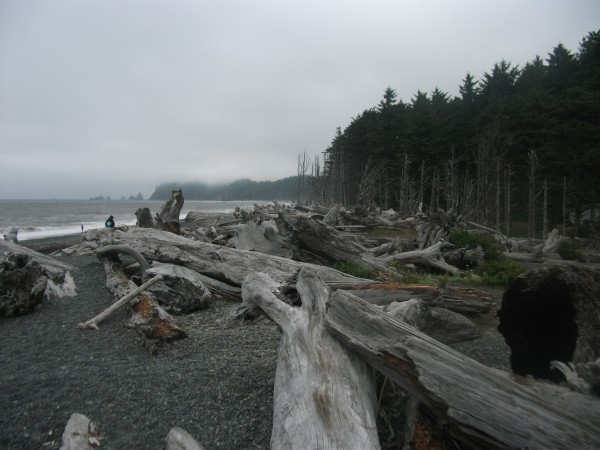 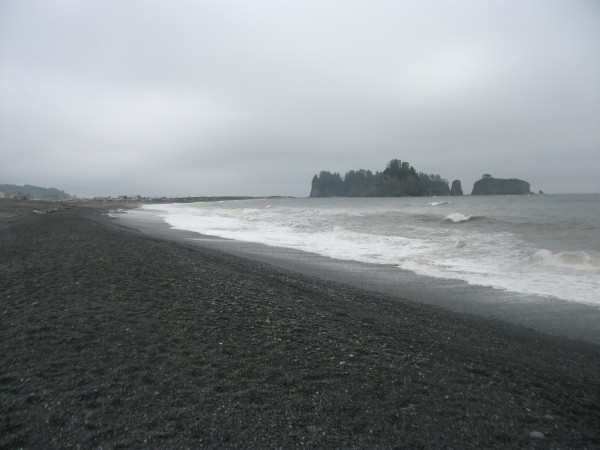 Then back to camp. My new alcohol stove worked out well, I boiled water for two cups of noodles and ate the rest of my Safeway sandwich. The new Thermarest NeoAir mattress was comfy, and the Sierra Designs Vapor Light 2XL (6 inches longer for tall people!) was long enough. All that’s left to do is write this report, but it’s getting dark at 9:30, so zzzzzz….. 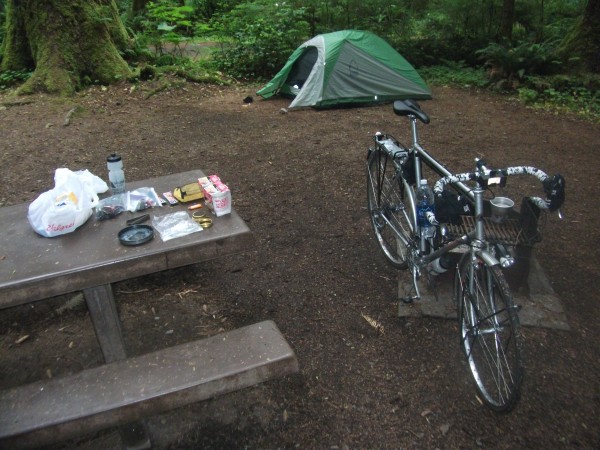