Since I’m camping, I woke up with the sun around 5:30, as is typical for me. I went for the morning run, just a couple of miles, almost all the way to the beach and back. Running in my cycling clothes isn’t bad, that’s kind of like being a triathlete I guess. The problem is that the cell phone and wallet bounce up and down like – oh, never mind. The easy solution is to just carry them in my hands, that’s good enough for such a short run. 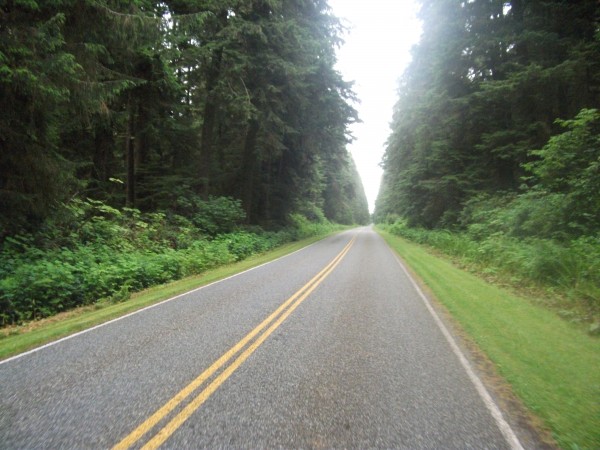 I got packed up, rode the few miles to where the road splits between the town of La Push and the Mora Campground, and made it to the restaurant just when it opened at 8AM. Well, it wasn’t really a restaurant, essentially a burger and fried stuff place, but with a few things for breakfast. Still, a waffle and bagel were enough to get me going, and it was a good place to hang out while I finished yesterday’s blog writeup. There were all sorts of Twilight references outside, such as the vampire threat meter, the treaty line, etc. Stuff I don’t get, apparently because I’m apparently too old. Still, I took photos for my friends (you know who you are)! 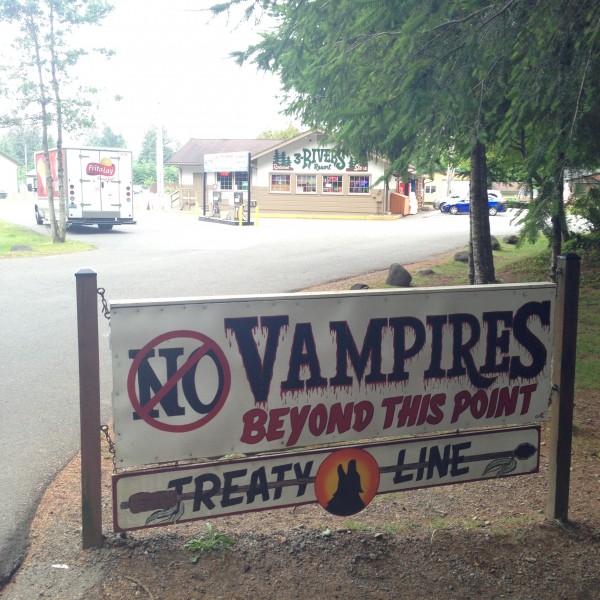 Then I headed back out on 110 to get to 101. Although there was a slight uphill grade on 110, there was enough of a wind to push me uphill, all the way to Forks. When restocking at the supermarket, I saw a couple of tandem bikes, and talked with a couple from Seattle who were touring around the Olympic Peninsula with their 8 yo son and 5 yo daughter. 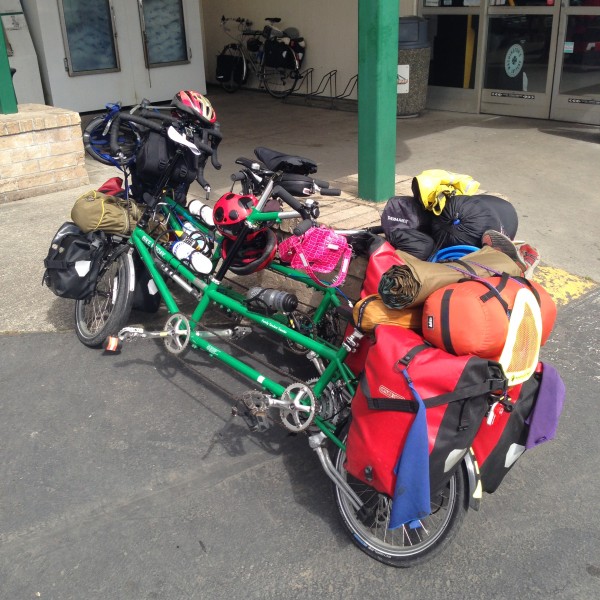 My original plan was to camp today at the Hoh Rain Forest Campground, 18 miles off 101. I started thinking that maybe I could get a hotel in Forks, leave my stuff in the room, then ride unloaded to the Hoh Rain Forest, then ride back to the hotel the same day. But then I checked the map, and that would have been backtracking too far.

After some rolling hills on 101, I made the turn off onto Upper Hoh Road. Then it was 18 miles to the campground, the same 18 miles I would have to backtrack tomorrow. But then I saw the private RV campground about 6 miles in. So I got a spot there, set up my tent, and then I rode up to Hoh unloaded. 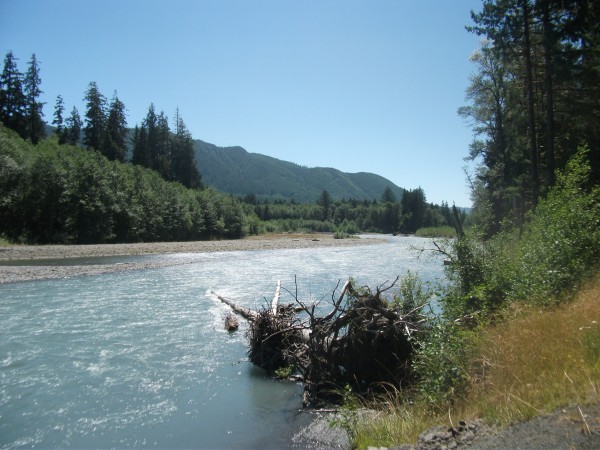 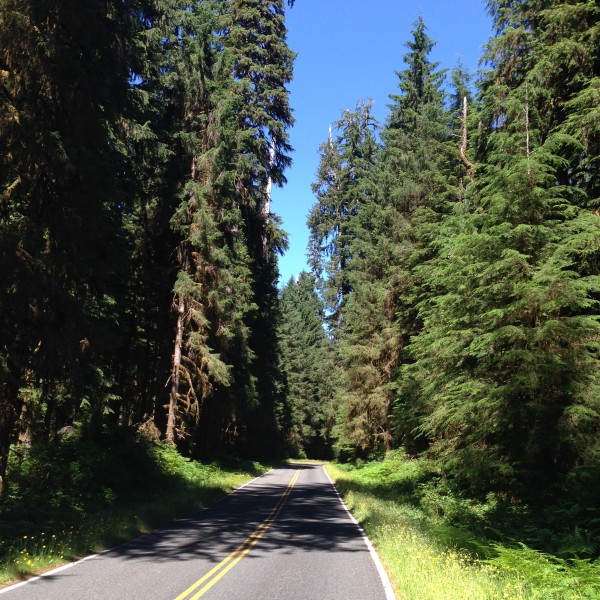 I guess I must have been lucky since it was all blue skies up at Hoh. I did the 3/4 mile hike on the trail with the name “moss” in it somewhere. I took lots of photos, all of which will have to wait until after the trip. 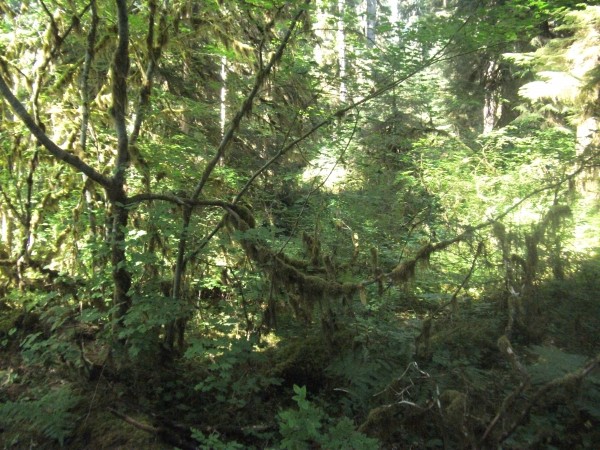 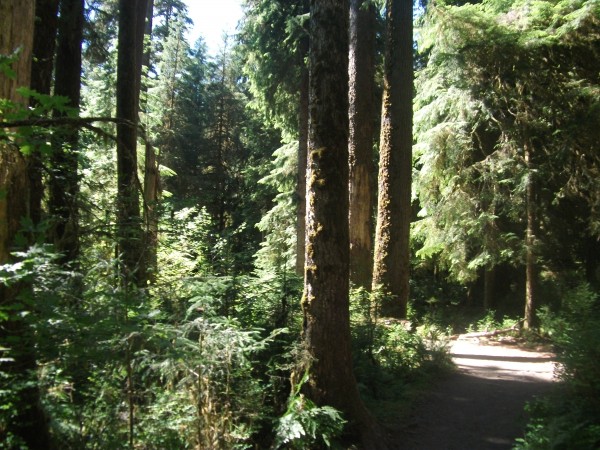 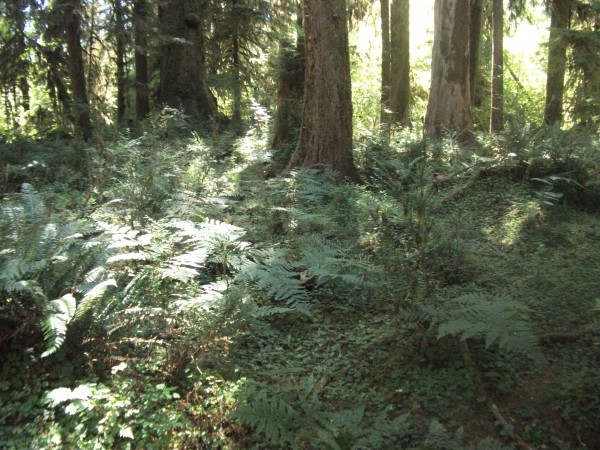 And then it was rolling hills, but mostly downhill, back to the campground at 5:30. I ordered a burger before the restaurant/front office/etc closed, and I found out they had a hot shower too. I don’t know why the other person didn’t say anything about the shower when I checked in.

So this is a nice quiet campground, and I am sitting out in front to get the maximum breeze (i.e., keep the mosquitos away) as I write this update. $20 for a campground with a hot shower, especially since last night’s was $12 without, was a good deal. And as a bonus, tomorrow’s ride will be 12 miles shorter!