Once again I woke up early at first light. I packed up and went to the registration/gift shop/restaurant/etc. shack. There’s a long winded sign on the front door which basically says “we’ll open whenever the heck we feel like it.”

They were closed, but just as I walked over, I saw a van pull up. So I sat at one of the front picnic tables, using their outlet to charge my iPhone, hopeful they would be opening soon. But instead they did a few things inside and then drove off in the van. So I instead pulled out my Pop Tarts and a banana and headed on my way.

Then it was six rolling miles on Upper Hoh Road and it was back on 101. Per my Adventure Cycling maps, I was expecting to see a grocery store not too far ahead, but that might have been associated with the RV park which is now closed (as noted in their map addenda). 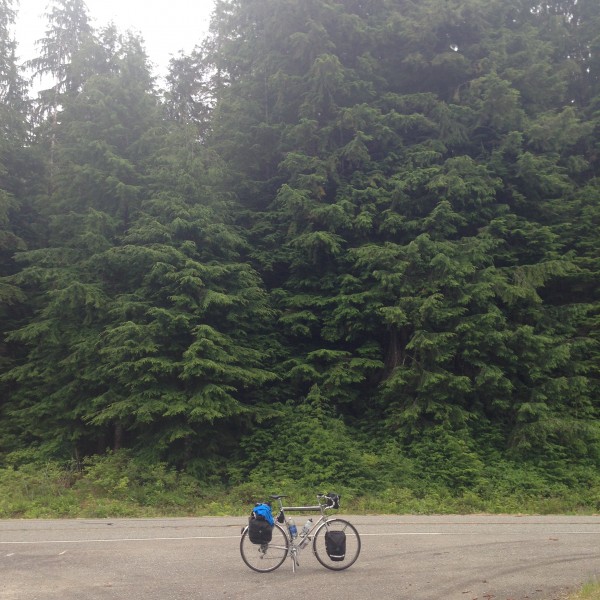 Finally 101 makes it to a 12 mile section along the Pacific Ocean! But you can’t really see the ocean and beaches from the highway, you have to pull out at the side roads and trails, but it is worth it. The first beach was Ruby Beach, which was nice – but I was starting to get hungry when I was about to leave. And I had eaten all of my cold food. So now it was a question of setting up my stove and having some noodles, or cranking out the miles to the restaurant in Kalaloch. I didn’t really want to blitz through this section which goes along the coast, so setting up the stove and boiling water for noodles at 10:30AM was the call. 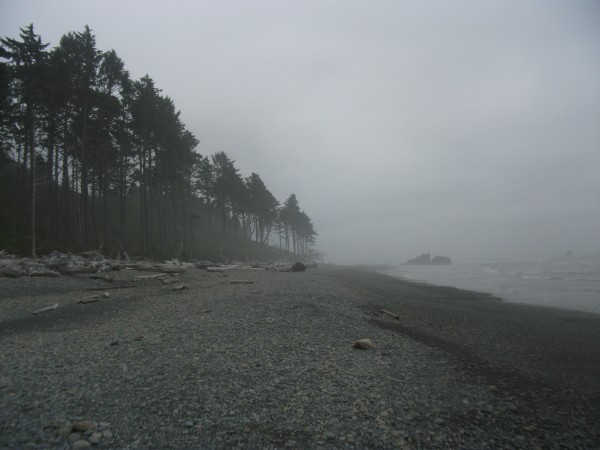 Just as I was setting up, a couple of guys on motorcycles asked if they could use half of the lone picnic table. Chad is retired military and Alonzo is a truck driver. We chatted for a while about lots of things, most of which I can’t say here. I was falling an hour behind my original plan at this point, but hey, that’s what bicycle touring is all about. 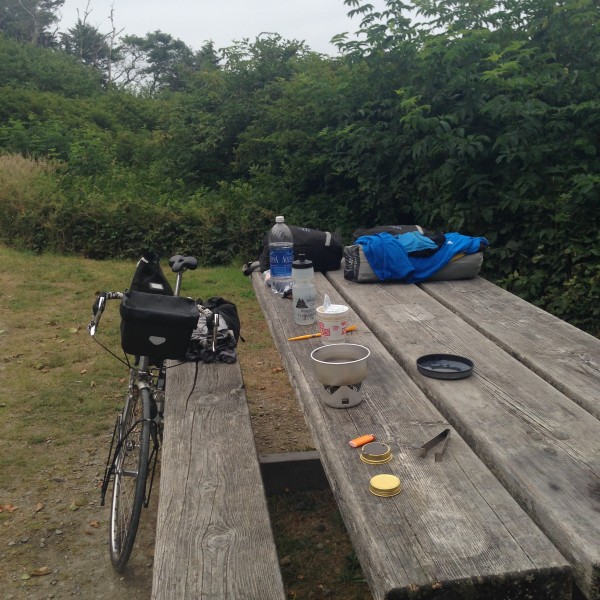 Well, I was glad I had the noodles, because then I could take the time to stop at all the turnouts. Especially by bike, because there are some ones which are almost hidden from the road. I would take my bike down the trail just far enough for it to be invisible from the road, then walk the rest of the way to the beach. 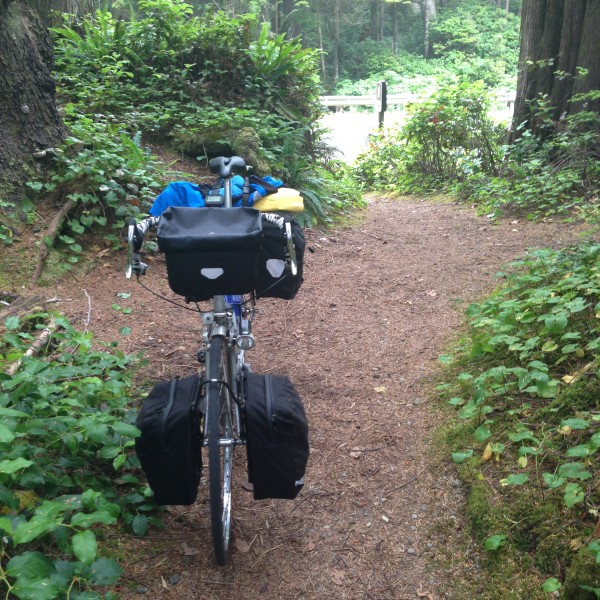 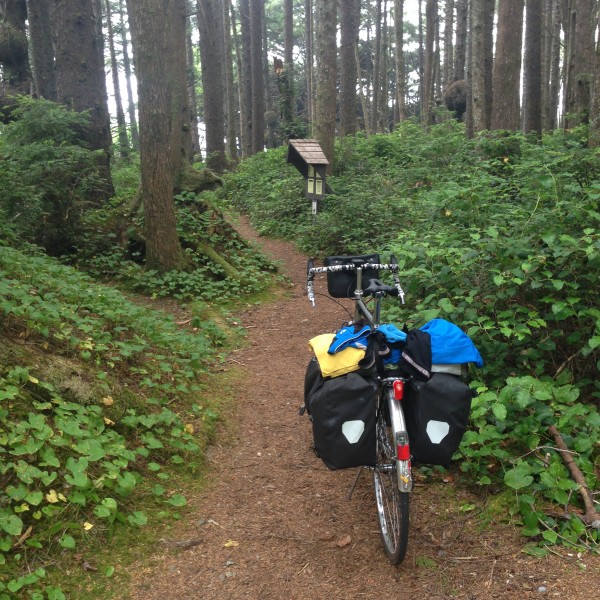 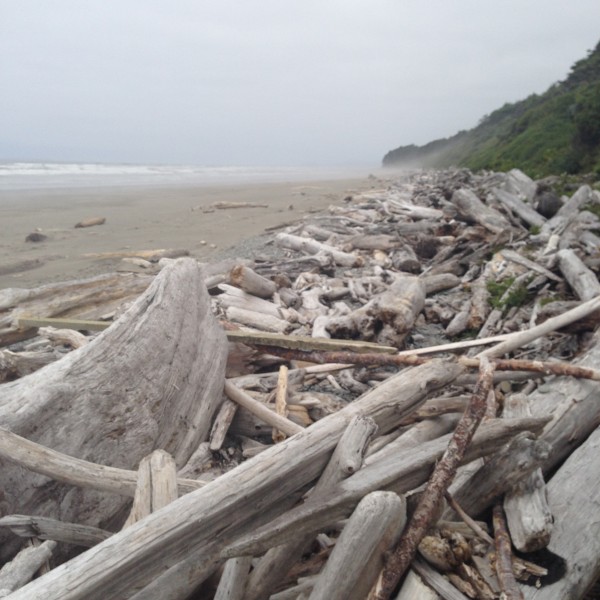 The best stop was the beach at Kalaloch, which I checked out after an overpriced lunch (because it’s in the Olympic National Park boundary?) at the Kalaloch Lodge. I stocked up on snacks at the small grocery store there too, enough to get me to my final destination. 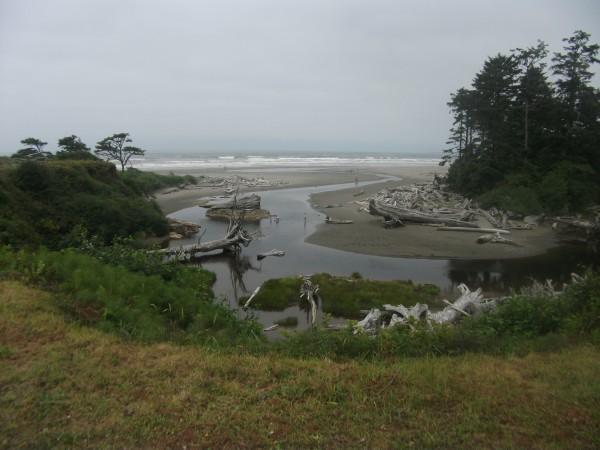 Then it was about 30 miles inland on 101. It’s hard to explain, but the scenery was beautiful yet monotonous at the same time. This wasn’t unexpected from the research I had done. Until the route through Oregon and California, where most of the scenery is on the route, the best part of the Washington portion is the detours off the route. 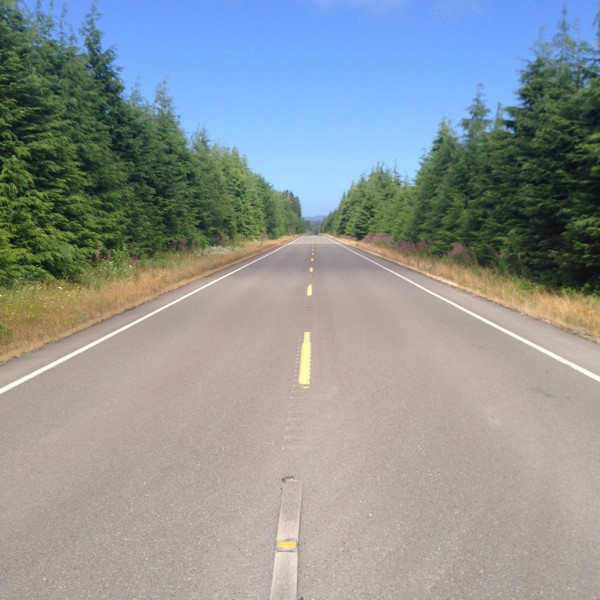 I made it to Amanda Park and could have stayed at a hotel there. But I’m glad I detoured off route (again!) three miles to Quinault Lake. Plenty of room in the campground, close to the general store which has a cafe, and really close to some short hiking trails in the rain forest behind the lake. I’m glad the Adventure Cycling maps had information on these services off route! 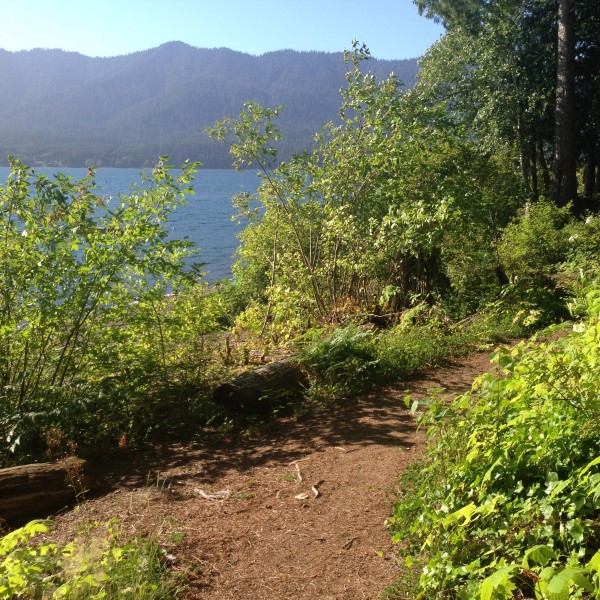 Tomorrow will be a long day, but the days will be shorter after that….