One final recap post from my bike trip a month ago:

Before I go into my wrap-up, here’s the video from the downhill on Hurricane Ridge Road headed back to Port Angeles, WA on Day 2.

Travel home from Astoria went smooth. I caught the morning bus to Portland. 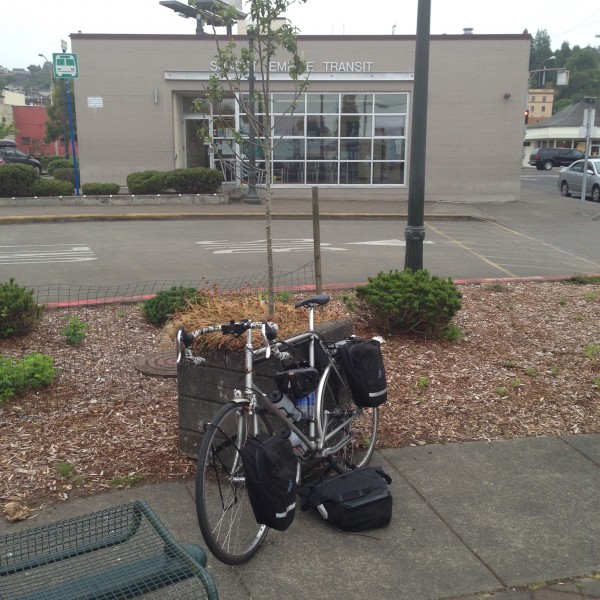 The bus from Astoria to Portland Union Station took my unboxed bike. Upon arrival at Union Station, I walked 20 feet to Amtrak Express, where I just had to remove the pedals, turn the bars, and roll the bike into a box for shipping to the Amtrak station nearest my home. I was surprised to see they had allen wrenches and pedal wrenches, but they said they box about 100 bikes a day. (That may have been an exaggeration, but given that this weekend was the Seattle to Portland ride, it may have been true today.) Then it was just a five block walk to the Old Town/Chinatown red line station, for a half hour ride right to the airport. 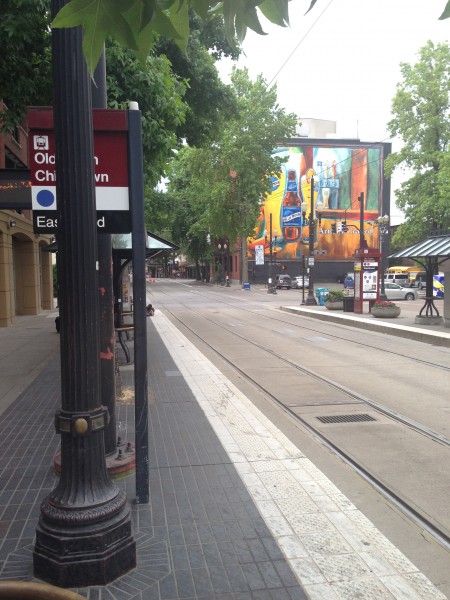 The only hiccups after that were a delay in San Francisco – due to summer fog, of course. And, for the first time ever, I was asked to put away my Bluetooth keyboard in flight! I’ve had this thing forever (originally purchased for my Palm Pilot well over ten years ago) and no one has ever batted an eye whenever I’ve used it. Well, it is a wireless transmitting device and so its use is subject to direction from airline personnel – but on a wifi-enabled flight (where the wireless signal is much stronger than Bluetooth) and who knows how many laptop computers and Bluetooth headsets? Anyway, I digress…

Shipping my bike via Amtrak Express worked well. I was able to ship the bike to the train station about five miles from my house for only $52. (Note: The default loss/damage liability is only $50, but additional insurance can be bought for 50 cents per $100.) Later that week, the bike came back in one piece – literally! I believe the minimal amount of disassembly helps the bike to survive the journey. Well, that and the fact that the box probably goes on the train standing upright and wouldn’t get stuff thrown on it like if it were on an airplane. 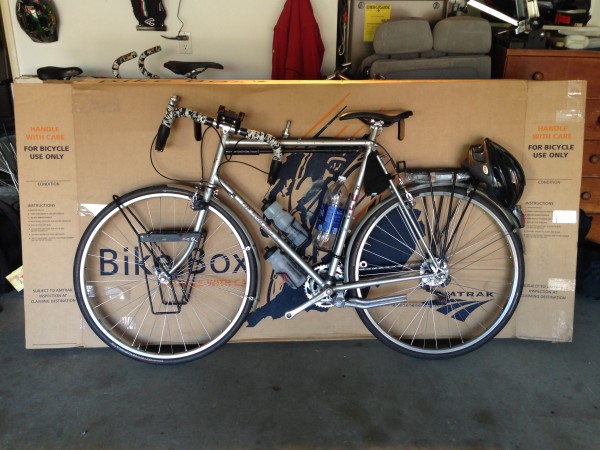 Well, upon closer inspection, there was a small scrape on the stem. I think that with the bars turned for shipping, this must have rubbed on the side of the box. Nothing that a friend can’t polish out for me! 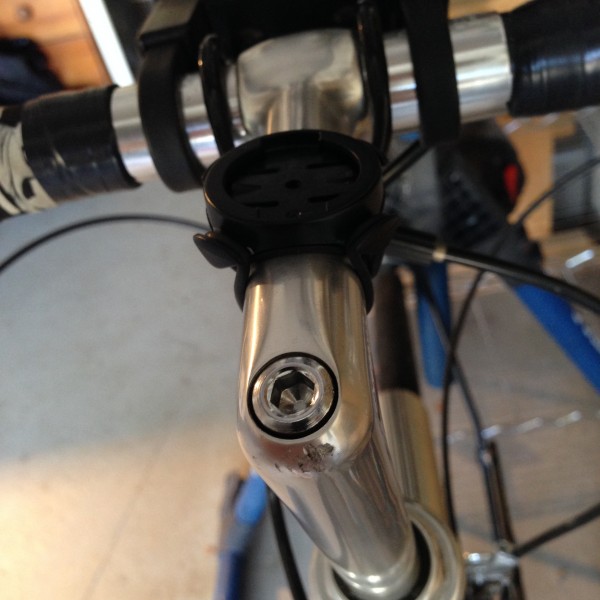 The first question is figuring out an easily accessible point as a starting point. I flew to Vancouver, took a ferry to Vancouver Island, and then took another ferry to Port Angeles, WA and considered that the “official” start of my tour.

As for the routes themselves, the Oregon and California coast routes are pretty well defined, though only with minor differences depending whether you’re following advice from the Adventure Cycling maps, the Bicycling the Pacific Coast book, or the route as signed by the state department of transportation. In the case of Washington, there’s a few different options, since there is no obvious “coastal” route due to the Olympic Peninsula.

First there is the Adventure Cycling Pacific Coast route. This goes south from Vancouver BC along Puget Sound, but then it stays inland before heading over to Astoria OR. Although I know that Adventure Cycling really works hard to find less trafficked roads, it seemed to me that their choice of route really didn’t seem to be in the spirit of sticking to the coast. (Although in retrospect, unless you make an effort to go off-route as I did, you never really get to see much of the coast from any of the routes in Washington.)

The Bicycling the Pacific Coast book has a “peninsula route” and an “inland route” (the latter following Puget Sound), which then merge and head to the coast before crossing into Oregon. I decided to follow the peninsula route from the book, and although parts of the route after the merge had more traffic, it wasn’t too unpleasant, and that routing was worthwhile as some of the best parts of my tour (Long Beach, Seaview, Cape Disappointment, and Ilwaco) were on that section of coast.

Later I found out that there is also the Adventure Cycling Washington Parks map which has a loop around the Olympic Peninsula. So I used this to supplement the book (in particular, using 112/113 to bypass 101 near Lake Crescent).

I had to work through the logistics of spending time across the border, even though I would spend less than 24 hours there. At least I already had a passport (especially for flying!), gone are the days where you can just cross with a driver’s license.

The next question was dealing with money. There was no use in getting cash for such a short trip and paying all the fees. I used my US credit card, which was accepted everywhere I went. I was a little concerned at first because I did not have a “chip and PIN” card which is common everywhere else in the world. I had to a pay a transaction fee, but it was still cheaper than exchanging money or going to an ATM.

As an added bonus, my mobile phone plan with Verizon with unlimited texting also includes Canada. I just had to turn off Apple iMessage before crossing, and I turned off data roaming too just in case.

With the completion of the Washington section. I’ve now cycle toured the entire Pacific Coast to San Diego. (Or do I have to consider Prince Rupert to Vancouver next?) So I believe that earns me the right to make some observations and recommendations, here they are, in no particular order.

The Oregon coast was my favorite part, next best was the Northern California coast north of San Francisco, followed by San Francisco to Santa Barbara, CA. While I still enjoyed Washington as well as Santa Barbara to San Diego, the main draw of those was to finish off the coast route.

Camping or motels? Camping gear gives more options, especially where the towns/services were limited in Washington and Northern California. Oregon and California have the “hiker/biker” campsites which just cost a few dollars per person and no reservations are required. The hiker/biker program isn’t as well established in Washington, but I never had issues with full campgrounds, though as I understand it, they will find a place for a cyclist to pitch a tent overnight even if campsites are full. I had no problems with finding motels in Oregon, so long as I was willing to stretch my distance a bit longer than the average bicycle tourist.

For those out of the area who want the best two weeks of the Pacific Coast, fly to Portland, take the bus to Astoria, ride south from there, and then return home from San Francisco.

Or for those in Southern California, it’s easy to rent a car one way to San Francisco, ride down to Santa Barbara, and then take the train the rest of the way home. I don’t see much touring value in continuing the rest of the way to the Mexican border.

In summary, this is a good route for the beginner bicycle tourist (but an experienced enough cyclist to ride about 50 miles a day) who has done a couple of shakedown overnights close to home. The scenery is great, the route is well traveled by other bicyclists, the weather is mild, the terrain is not too difficult (there are hills – a few of them are long and steep, but no mountains), there are plenty of campgrounds, and there are reasonable distances between other services.

With the Pacific Coast done, what’s next?

For the past few years, it’s been easiest for me to take off time from work during the summer. Hence, finishing up the Pacific Coast was a natural fit.

In prior years, I had been taking off time in the spring to do the western parts of Route 66. But that went on the back burner once I covered everything up to Flagstaff, AZ, since almost all of the old Route 66 east of there in AZ in NM has been replaced by interstate highway I-40. That said, the Route 66 maps from Adventure Cycling should be out this fall. Perhaps they have some alternatives to I-40 using some of the older alignments of Route 66?

There’s always other parts of the country, but again, summer is still my best available time slot at the moment, might be a little toasty…

I’ve bicycled across America before, but don’t have time in the immediate future to do it again. Though truth be told, if I ever went on another bicycle trip again which lasted longer than a month, I’d want to build in many more off-bike days for interesting stops on the way. just to mix things up a bit.

So I guess that’s a long winded way to say “we’ll see!”