I wanted to squeeze in a race during my trip to New England, and so I found the Norwood Turkey Trot. It was on the Sunday before Thanksgiving, which fit my schedule better than a run on Thanksgiving morning, and it had the added bonus of being a good halfway point to meet up with my friend Bruce at the race. 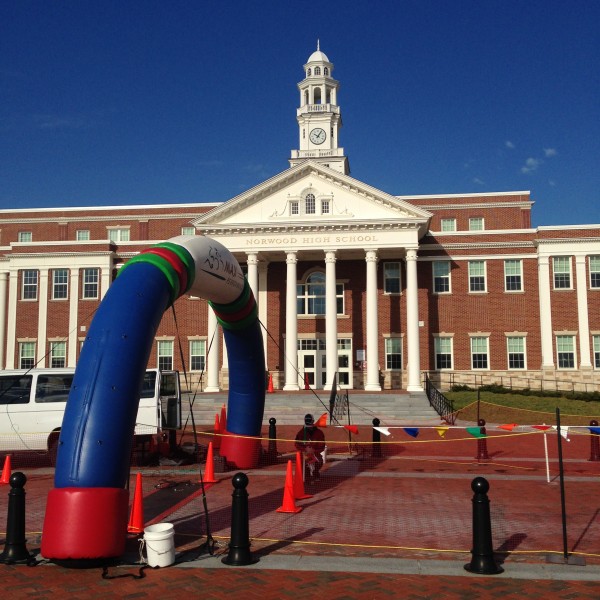 After the Dinosaur Dash earlier this month, I knew that my Nike Pegasus shoes were approaching their end of life – and that includes the “new” pair I had already added to the rotation but was no longer really new. What I didn’t know at the time was how bad they really were. I pulled new pair of Nike Pegasus out of my closet (a stockpile of closeouts for under $30 at the Nike Store – the advantage of being size 13), and they were night and day compared to my old ones. Since I would have to get used to a new pair of shoes anyway, I took the opportunity to get a pair of Asics, as recommended by my chiropractor/physical therapist/runner (I’ll just say “Dr. N” – that’s a story for another post), retiring the new Nikes to walking service.

I got the Asics GT-2000 2 and they felt great. The only problem was that I wore them walking all weekend to break them in, which was a bit too harsh of a transition, because by the end of the weekend it became painful to sit! Dr N had an opening for me on Monday, and noted that the upper part of my hamstrings were sore from getting used to the new shoes, so the issue was just temporary. Luckily I had design reviews all week at work, which seem painful but were actually a blessing because I could easily alternate between standing and sitting until I felt better.

My short running history has all been based in Southern California, where my coldest runs have been in the high 50s and low 60s, and a T-shirt and shorts suit me just fine. The biggest unknown was what to wear – I saw some advice online to start covering up when it gets below 50, yet I’ve seen marathoners run with just a shirt and shorts in 40 degree weather. I polled my Facebook running friends and got a similar split in opinion. To be on the safe side, I picked up a pair of cheap REI running pants. If nothing else, I could at least wear them to the race and take them off shortly before. 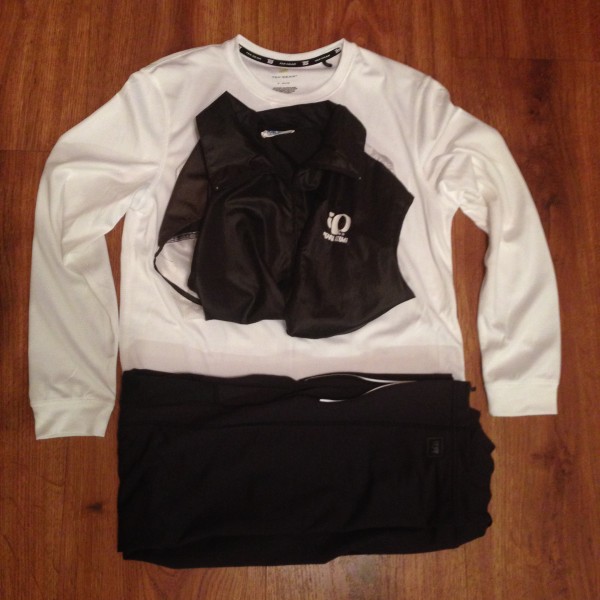 A few days before the race, the morning temperature had dipped down to 48 degrees, so I took that as an opportunity to test the pants. I rounded them out with a long sleeve Dri-fit shirt and my (too short in the front for running) cycling vest and ran for a few miles. While I didn’t overheat, I knew I could easily go without the pants (and certainly the vest!) at that temperature.

This summer when I got a 5K PR on the track of 22:44 (a 7:19/mi pace), I figured I could continue to ramp up into the cooler fall season and run this 4 mile race in under 30 minutes, at a 7:30/mi pace. But with my body telling me (along with Matt Fitzgerald’s new 80/20 running book – a subject for yet another blog post) to back off the intensity a notch, culminating in running the flat Dino Dash 5K at a 7:37/mi pace (slower than planned), I figured it would be prudent to change my target pace for this race to around 7:45/mi. Well, in reality, it was whatever pace was needed to stay ahead of Bruce. Back in college we both played in chess tournaments, nowadays we coincidentally took up running at about the same time, yet 25 years later the competition continues.

Fast forward to race day – the weather didn’t disappoint, it was actually a bit warmer than forecasted the day before! 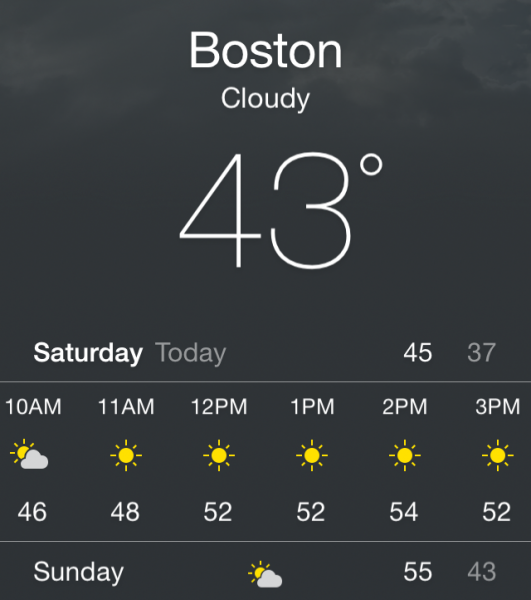 But first off was the free kids race, which was done as a big loop in the front lawn of the school. My son really enjoyed having a number and being “official”. 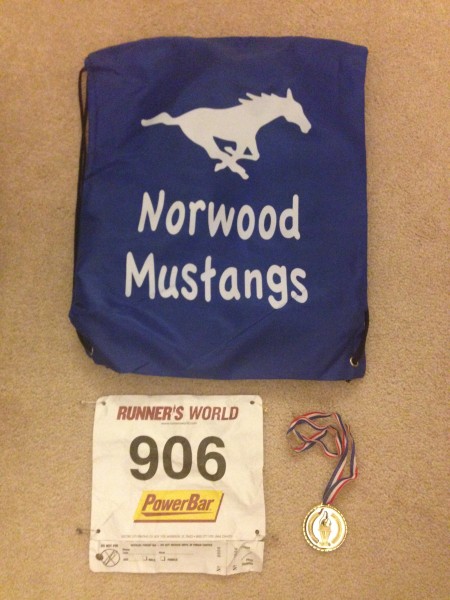 He got a Norwood Mustangs goodie bag (the people who gave it to us said that if we were from Walpole, we could use it as a trash can) and all I got was a T-shirt! 😉 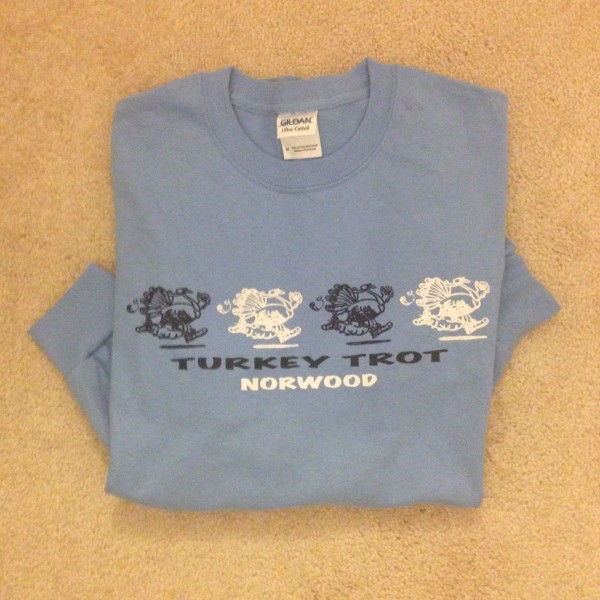 Then my son went crazy with my iPhone camera at the start line. He got a nice shot of the timing equipment. 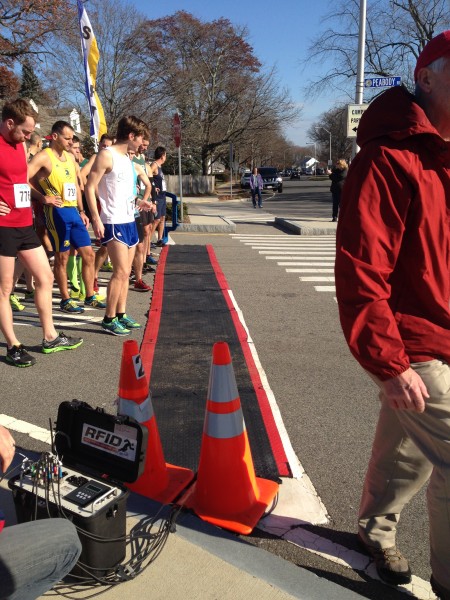 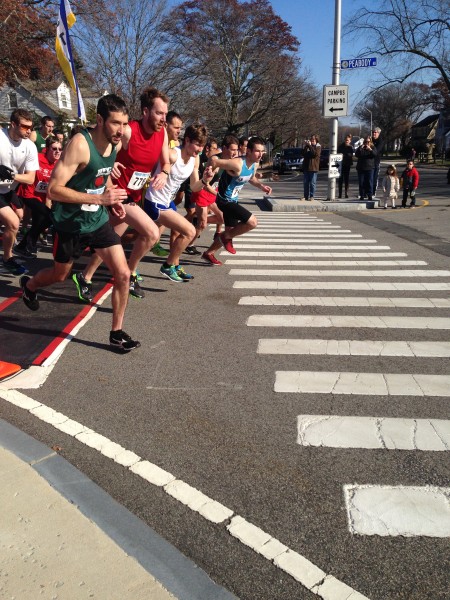 Look, he got one of me weaving my way through the crowd! 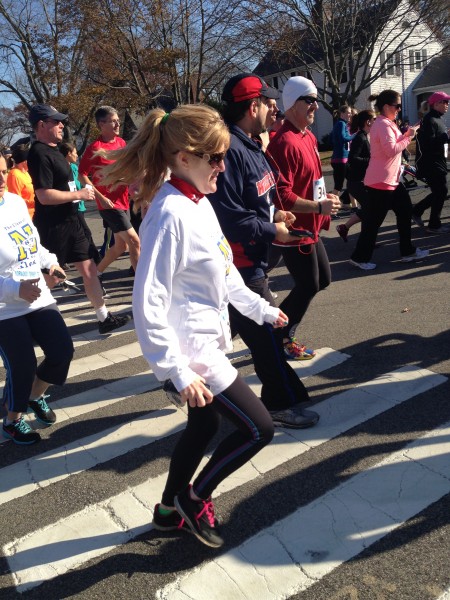 With the first half mile being all downhill, I knew that what went down would have to come back up again. So this was a hillier course than I expected, and 7:45/mi was too optimistic, so I figured I’d just do what I could. The last hill was a killer, I was even getting warm in a T-shirt and shorts on that final home stretch! Once I saw I had a chance to finish in less than 32 minutes, I sprinted for the last quarter mile, passing people and making across the line just in time! 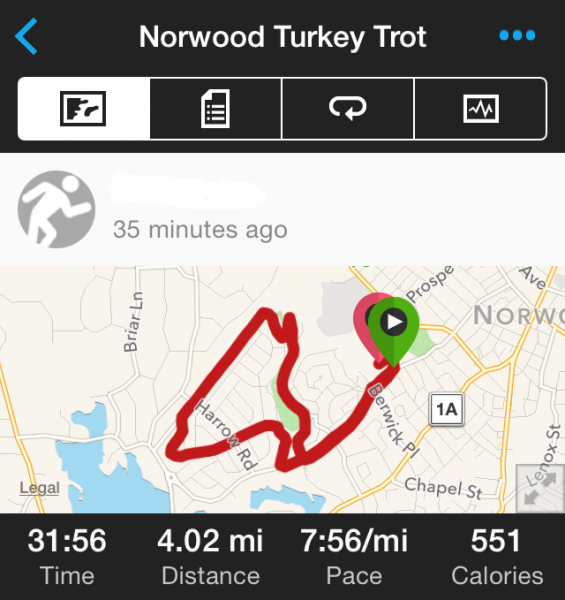 Here’s the pace and elevation profile – all uphill for the last mile. 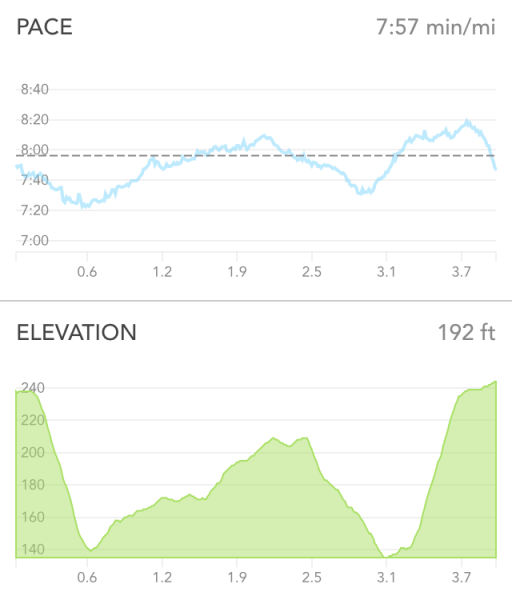