At the end of October, I supported the American Diabetes Association “Surf to Summit” Tour de Cure bicycle charity ride in Orange County, California as a bicycle mobile radio operator.

For most of the other bicycle charity rides (such as the MS ride the weekend before), I just show up with my bicycle on the day of the event and then ride bicycle radio support for the selected route. But for this event, I wear multiple hats, as I am also on the planning committee as the route chair, with the main task of being the one who comes up with all of the routes for the bicycle riders. Consequently, that meant I woke up at 3:30AM in order to help set up at 4:30AM. 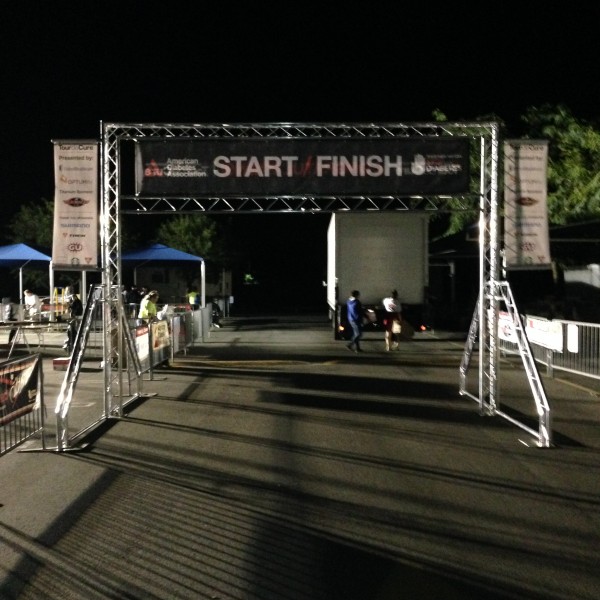 I helped with various miscellaneous tasks until 5:30AM, when it came time for my most important task of the morning: meeting with the volunteers who were putting out the signs marking the turns for the cyclists. It has helpful having volunteers from a local cycling race team who had knowledge of the roads and bike paths we were using on the ride.

Then it was time to get the bicycle ready. After a couple of years of doing this, I have the bicycle mobile radio rig dialed in pretty well. Earlier versions of the rig had a Comet SBB-5 antenna cantilevered off the seat of my fast road bike. But since I am mostly riding sweep, my fastest bicycle isn’t necessary, I can use my touring bike instead. So I still have the SBB-5, but now it’s mounted to the rear rack on the touring bicycle. The HT (handheld transceiver) along with the handheld speaker/microphone is mounted to the front handlebars. 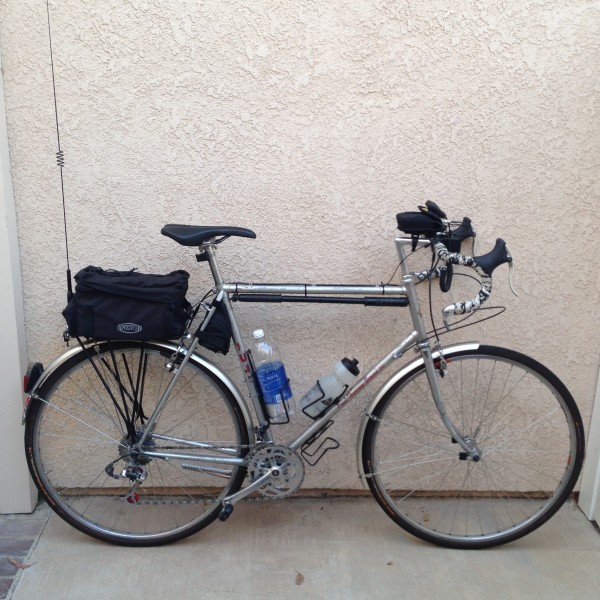 To minimize time away from the start/finish setup, I had originally planned to ride sweep on the 25 mile ride. But the setup was going smooth enough for me to make the executive decision to sweep the metric century (62 mile) route instead. But first, I had to double check the signs for the first couple of turns out of the gate – especially since the 62 mile and 25 miles diverge at the beginning. I made some minor adjustments to the signs, but then I couldn’t get back to the start/finish because the wave of the 62 mile riders was leaving.

I waited for a bit to give the riders a head start before heading out on the route. But in my earlier rush, I forgot to mount the antenna on the bicycle! Thankfully, my wife and son were also working with the ADA at the start/finish, so they got the antenna from my car and gave it to Bonnie at net control, and one of the motorcycles was able to get it out to me.

Usually I catch up to the last riders pretty quickly, but a relatively fast group of riders and a mostly downhill run at the beginning meant that I rode the first 20 miles to the beach without seeing any other riders. Wearing my multiple hats, I grabbed a few of the route signs which were inside the state park area, so that those collecting signs after the ride wouldn’t have to pay to get inside to pick them up. 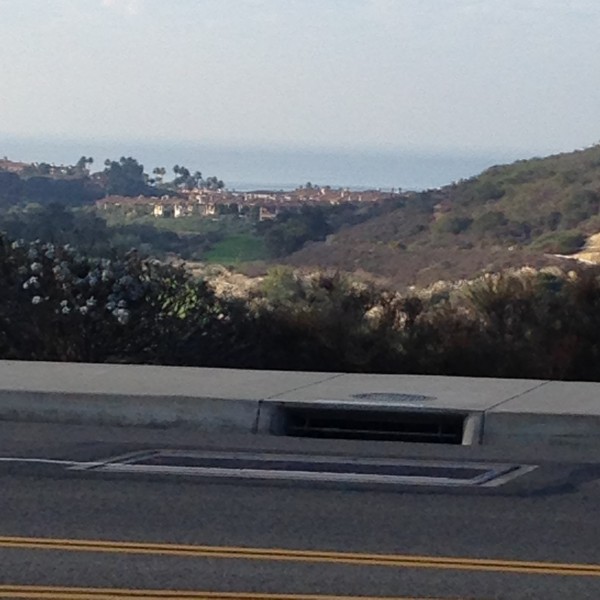 I finally saw the last riders leaving Rest Stop 1 just as I as pulling in. I didn’t spend much time at that stop, so I caught up with those five or so riders not too long after leaving. The nice thing about being a bicycle mobile is that it’s easy to hang back as a “tail end Charlie” and keep an eye on the last riders, especially to see if they are having any problems, yet without “stalking” them or making them feel rushed.

Sure enough, good thing I was there, since one of the riders had a problem with her derailleur. Luckily I knew that Jax Bicycle Center, one of the sponsors of the tour, was just a mile away and on the route. I helped her get the bicycle into the right gear so that it could at least make it to the bike shop. We went inside, they were able to help us out, and we were on our way. 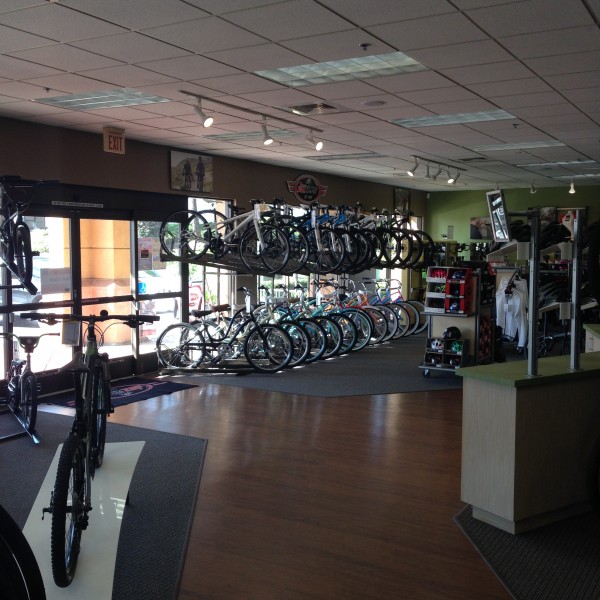 As luck would have it, about a half mile after leaving the bike shop, she flatted. I was there to help change the tire. While doing that, I was chatting with her friend – he has been a ham radio operator for about 45 years. Unfortunately, I forgot his name and call sign. 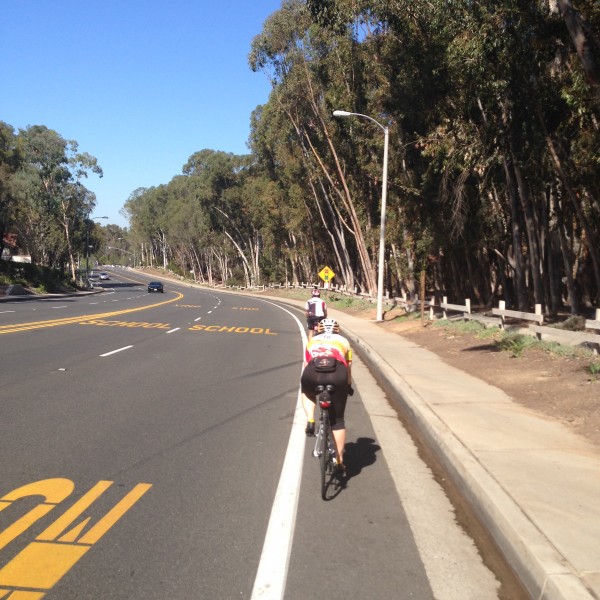 The route went on a stretch of bike path for a while. The motorcycles had to detour on streets around the path, and so they could not find the last rider. This was yet another area where the bicycle mobile shines – I can ride on the bike paths where the motorcycles can’t. The only problem is that the bike paths around here tend to be located down along rivers or creeks – generally places where it can be hard to hit the repeater from my bicycle. Though I stopped and used the cell phone to call net control when needed. 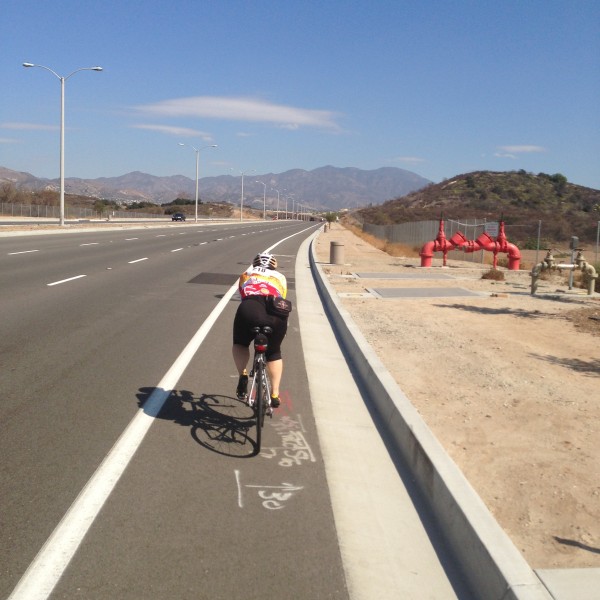 After doing a loop through the flats of Irvine, the ride was uphill all the way back to the start in Rancho Santa Margarita. The last rider didn’t make it all the way back to the finish, but she at least made it up the challenging Alton Parkway climb up to Rest Stop 4, where a SAG vehicle would take her back to the start/finish. We chatted while waiting for the SAG vehicle – she told me why she did the ride and about all the people in her family that have been affected by diabetes. This was both interesting and sad to hear at the same time. 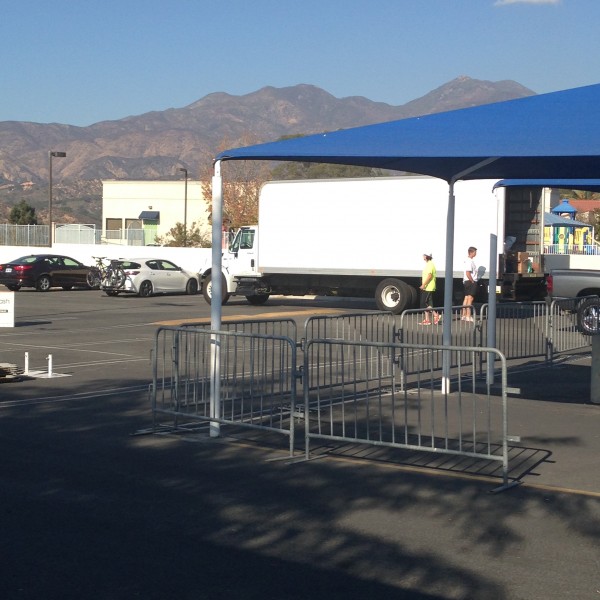 I rode the remaining few miles back to the start/finish – no way I was going to take the SAG wagon – and was the last rider in, as they were starting to tear everything down. The good news for me was that some of the other people on the organizing committee had already picked up the signs on the route, saving me from having to do it myself! And the best news of all is that after Mike was talking with one of the cyclists at the event, we might have another ham radio operator who is interested in being a bicycle mobile for future events!