My recent purchase of an ElliptiGo resulted in having to work out transportation options. It will fit inside my 2000 Toyota Sienna, but it is a real pain. So I looked into other methods, and getting a hitch mount rack was the way to go. Later on, I learned I could use the hitch to pull a trailer too!

I installed the Curt 13511 hitch mount in less than ten minutes. I first had to unbolt the tow hooks on each side of the vehicle. 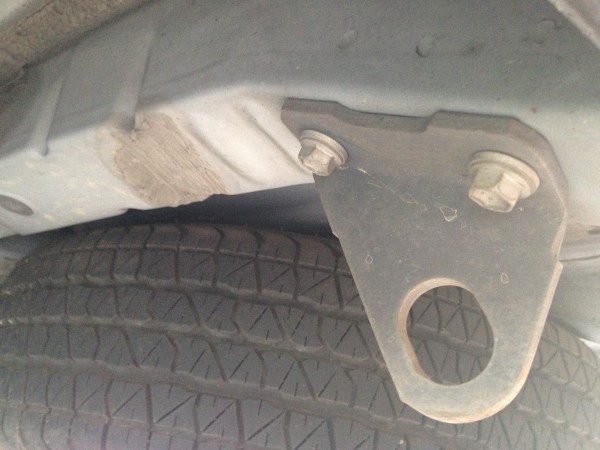 Then the hitch was mounted using the provided bolts, using the same holes and the manufacturer’s weld nuts. 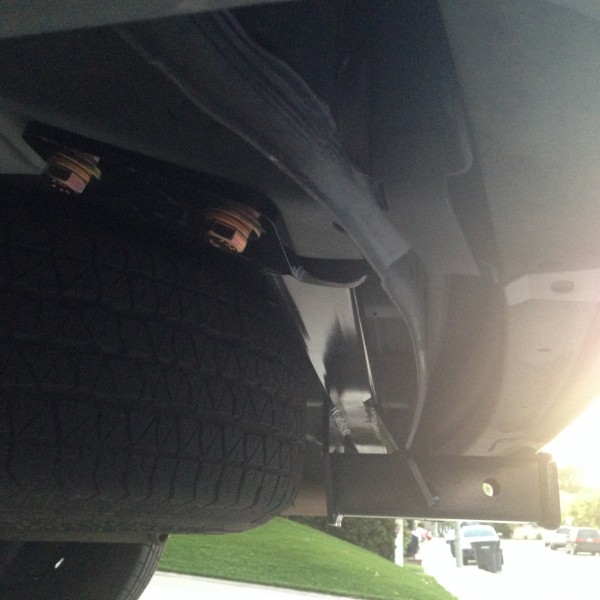 The only somewhat tricky part was lifting it over the exhaust. It’s nice to have a helper do this for you. 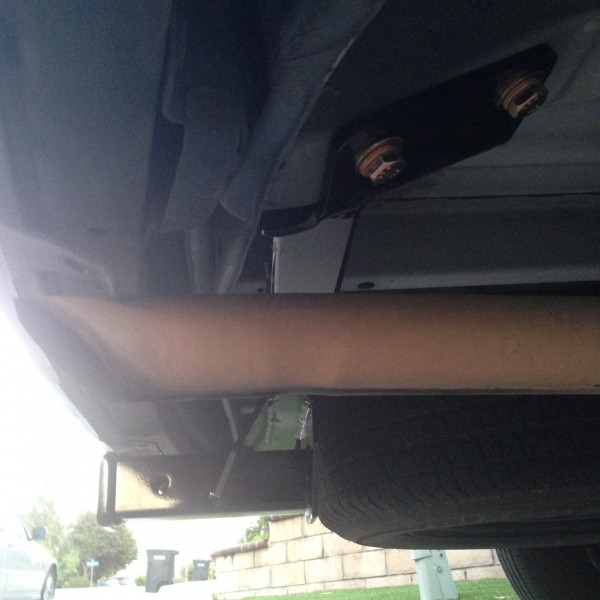 My hitch is slightly off center. That’s because I was rear ended years ago, causing the right side of the vehicle frame to get pushed in about half an inch. There was enough wiggle room in the mounting holes that it wasn’t a problem to install the hitch, though. 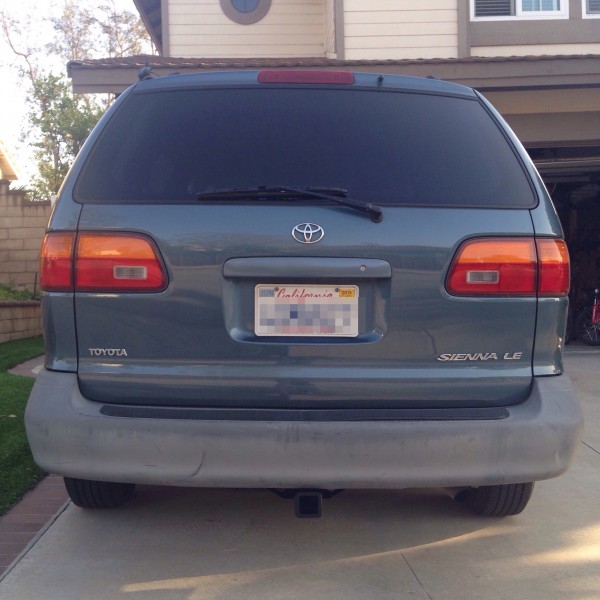 If I had known it was this easy to install the hitch (on this vehicle), I would have done it years ago!

The Hollywood Racks 1450R hitch mounted rack, with slight modifications (flipping the wheel holder over and installing a fork mount), is one of the few that will work with the ElliptiGo. 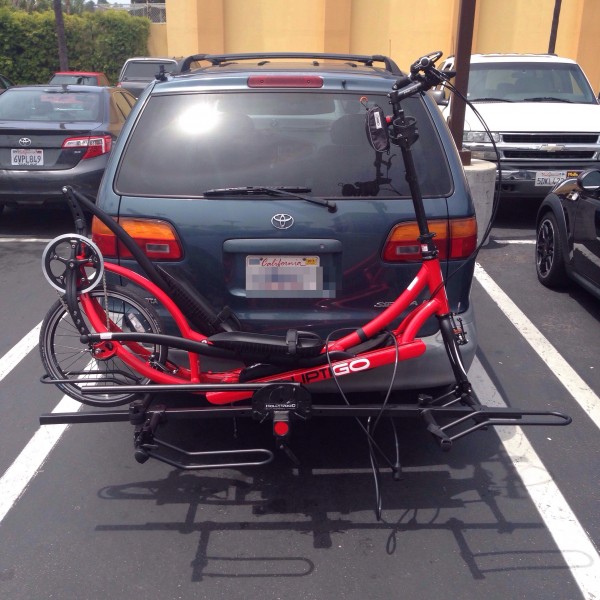 Here it is folded up. You can more clearly see here that the hitch isn’t perfectly centered. The right side of the rack is about an inch closer to the bumper compared to the left side of the rack. No big deal. 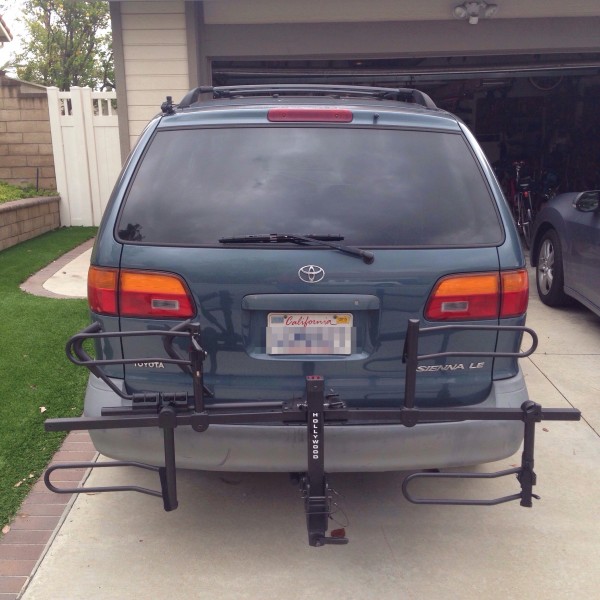 A side view of the rack folded up. 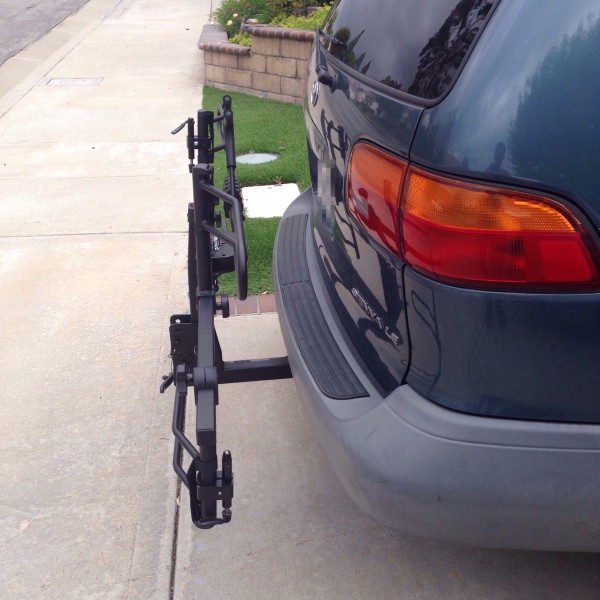 Wiring and Ball for Pulling a Trailer

Hmmm, now that I had a hitch mount, the thought of pulling a trailer entered my mind. Then I wouldn’t have to borrow a truck for my annual yard cleaning at the mountain cabin.

As far as I could tell, here are the maximum weights for the first generation Toyota Sienna.

Here are the weights for common U-Haul rental trailers:

So pulling a trailer definitely within the realm of possibility! (Though don’t ask me to tow the big Cub Scout camping trailer!) 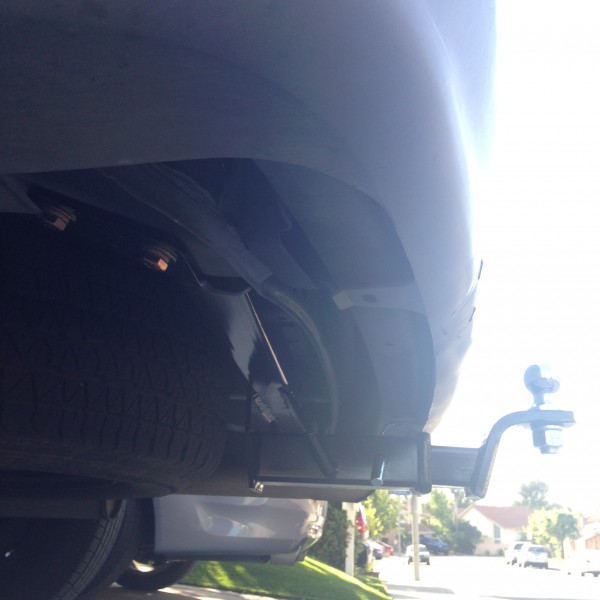 All I needed was a ball and hitch. 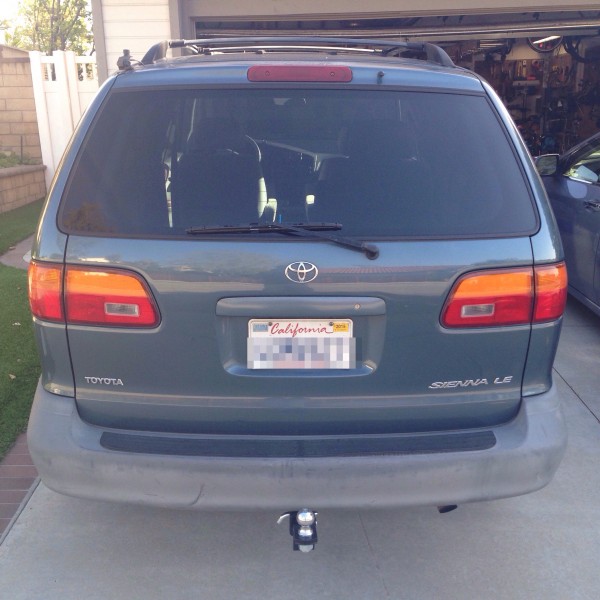 And then I needed to install a wiring harness for the taillights and brake. I got the Curt 55418. I forgot to take photos of the install, just a photo at the end of a bunch of new clips I had to buy to replace the broken ones from removing the interior panels. 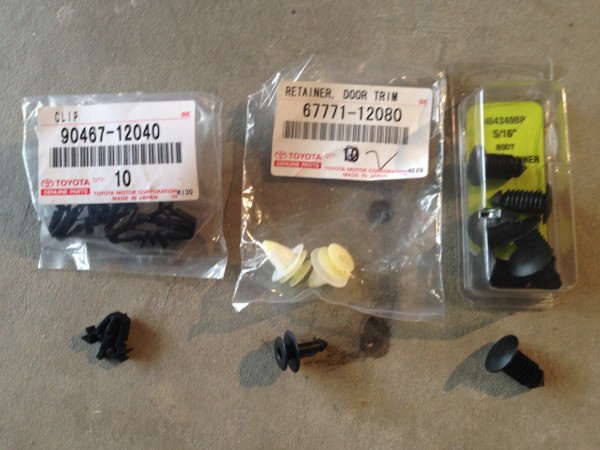 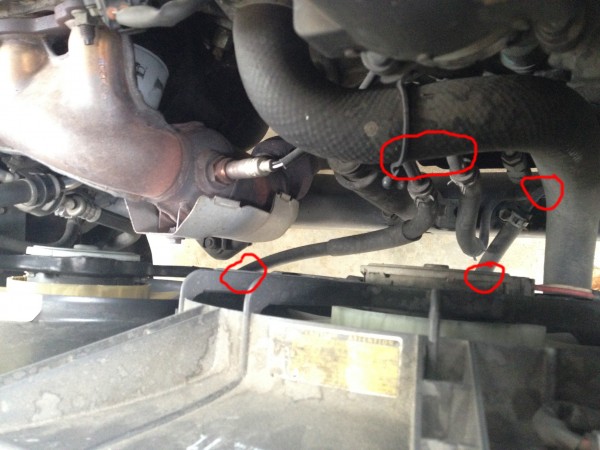 Those two lines go over by the front air scoop in the bumper just below the driver’s side headlight. Looking inside, sure enough, there was an extra transmission cooler! 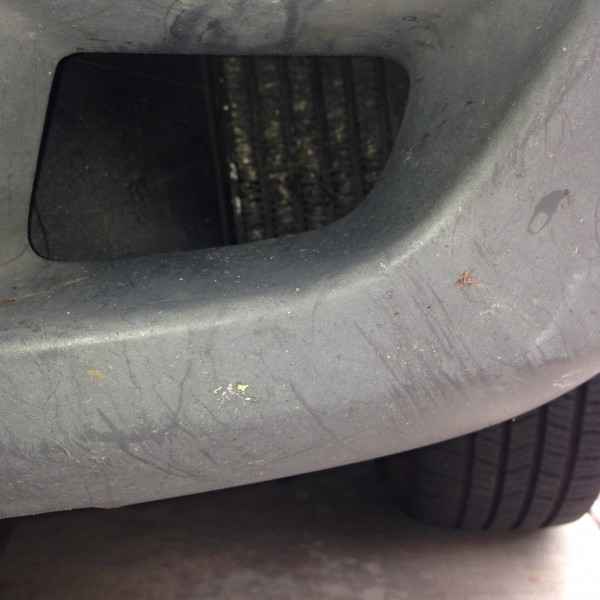 This weekend was annual yard cleaning at the mountain cabin. What size trailer to rent, 4′ x 7′, 5′ x 8′, or 6′ x 12′? There are no 4′ x 7′ at the local U-Haul, so that option was out. It was either the 5′ x 8′ which doesn’t have a brake, or the 6′ x 12′ with a brake. Since I had to drive it up 2000 feet in 8 miles to the cabin, I opted for the smaller and lighter trailer. At 1000 lb for the trailer I am technically at the limit without a trailer brake. But my load would be just light pine needles, and I would only be driving my load in town at 20 mph on local streets, so I didn’t see an issue with being unable to stop when fully loaded. 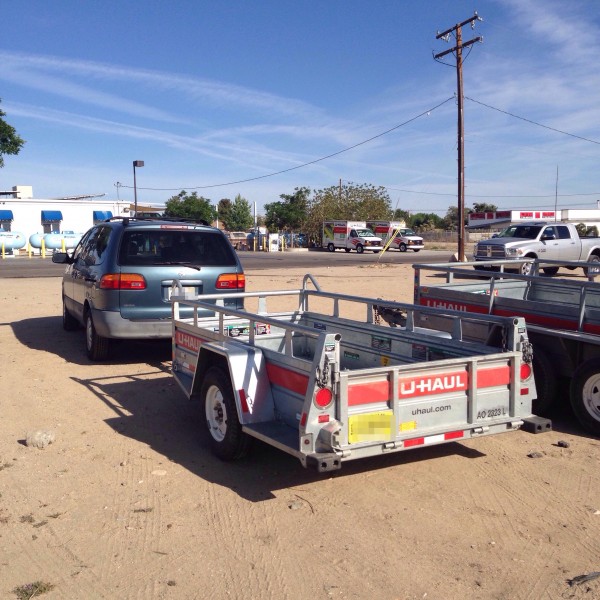 Flipping the ball mount upside down put the trailer at the perfect height. Also, since I’m not pulling a trailer very often, I just left the wiring harness inside the van, rather than trying to find the grommet to run it underneath down by the hitch. It’s OK to close the rear door on it, as long as the wiring is kept away from the latch in the center. 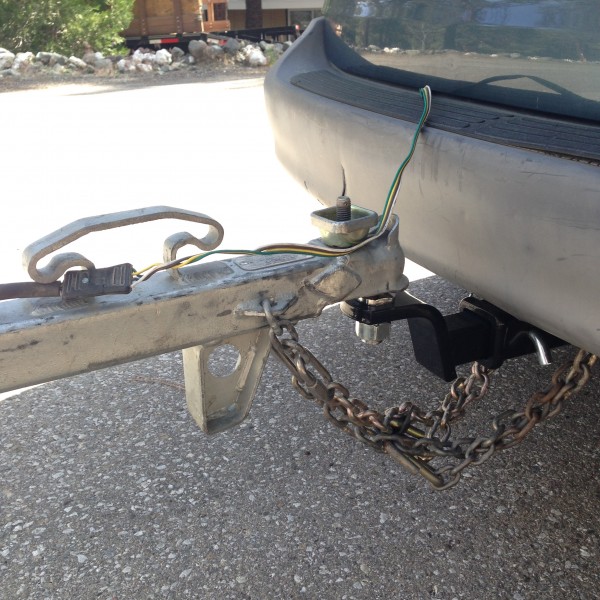 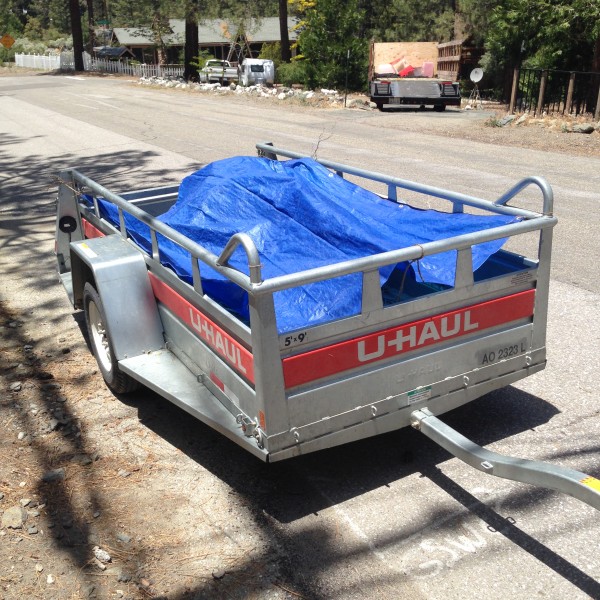 The van survived pulling the trailer up the mountain. And the brakes were able to handle getting it back down! 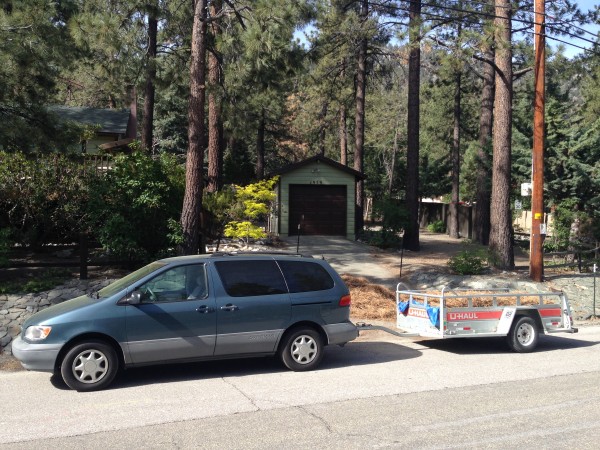