I had been thinking about picking up the Asus RT-AC88U router, mainly for the mountain cabin, but I also thought of it for home due to its eight (!) ports. The latest selling out of internet privacy was the tipping point for me to bite the bullet on the purchase, since a VPN can be set up on the router. (Now I realize that the ISPs would most likely sell just the list of sites accessed, not the contents sent back and forth to such sites, but still…)

The router is HUGE! But I (barely) found some space for it. With the eight ports, I was able to get rid of the network switch that was previously there. 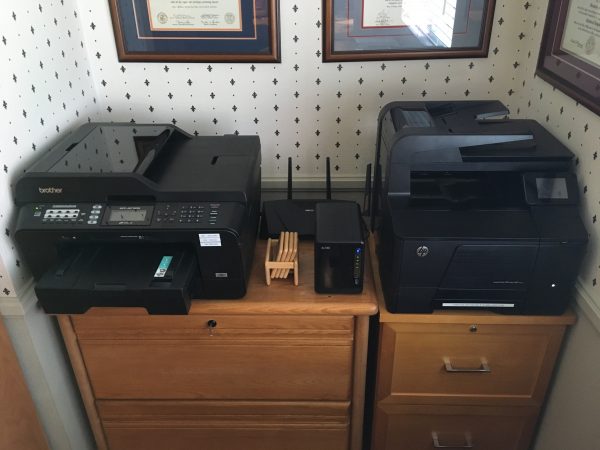 The cable modem is connected to my old Netgear router, which has the thermostat and work computer which need to be remotely accessed from the outside world. Then the Asus is set up “behind” the Netgear, with everything else in the house connected to the Asus.

I was under the impression that the router shipped with DD-WRT installed (like the Buffalo DD-WRT routers). Instead, it came with the stock Asus firmware. I have my VPN running on it just fine, so I’ll stick with the Asus firmware for a while and see how it goes before trying to flash the DD-WRT.

Wireless range is excellent! It covers the whole house easily, even on the 5 GHz band. So I’ve moved all of the non-legacy devices from 2.4 GHz to 5 GHz.

Only issue right now is that Hulu and Netflix don’t like the VPN. I looked into seeing if one device connected to the router could be excluded from the VPN in DD-WRT, but that seems like more trouble than it’s worth. So I will have to connect the new TV to the Netgear rather than the Asus, no big deal.

Overall, I’m happy with the Asus RT-AC88U so far!