It’s been so long since I’ve posted here, that this is the first post since I’ve moved – not too far, still in the same city, just six miles down the road. But it does mean that I now have a chance to talk about TV antenna issues. At the old house, reception was not an issue, I had line of sight to the transmitters on Mount Wilson (in the Los Angeles area), and so a cheap tiny antenna on the chimney would get all of the signals. Now I live in an area where nearby hills obstruct the line of sight to Mount Wilson.

Here is the TV Fool report. At the old house, just about every station from Mount Wilson (333 degrees orientation) showed up as green and LOS (line of sight).  Now they are yellow (attic mounted antenna probably needed), red (looks more like pink below – roof mounted antenna probably needed), or gray (very weak channels requiring extreme measures to pick up). The “2Edge” refers to double edge diffraction of the signal between the tower and my house. 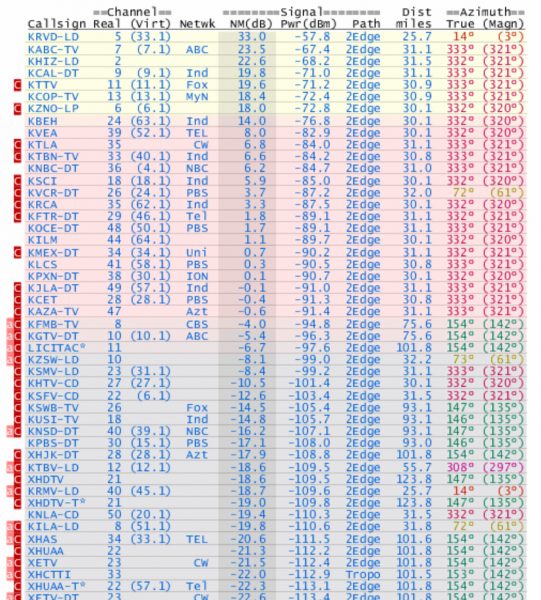 However, the signal plot maps were a little more encouraging. An example from KNBC is below. (For some reason, the color scheme on these maps is different than the TV Fool reports.) The transmitters are on Mount Wilson just northeast of Pasadena. My home is at the marker to the southeast. I’m in a sea of purple (which is bad), but if you were to zoom in (I won’t, for privacy reasons), it’s a little less purple-y by my house, which gave me some hope.

After moving in, the immediate need was for reception for the downstairs TVs. Since there were no coax cables going between the first and second floors, I decided to mount the antennas in the garage attic.  The garage faces the direction I need to point the antennas, so there was no penalty for installation there, aside from loss of height. Therefore, I installed my old UHF antenna (Antennas Direct 91XG) and my old VHF antenna (Winegard YA-1713) in the garage attic, and they worked well enough to pick up the major stations and then some. My roof is concrete tile installed on plywood, which doesn’t block the signals as much as other roofing materials. I connected both antennas to a VHF/UHF diplexer, and I was in business. 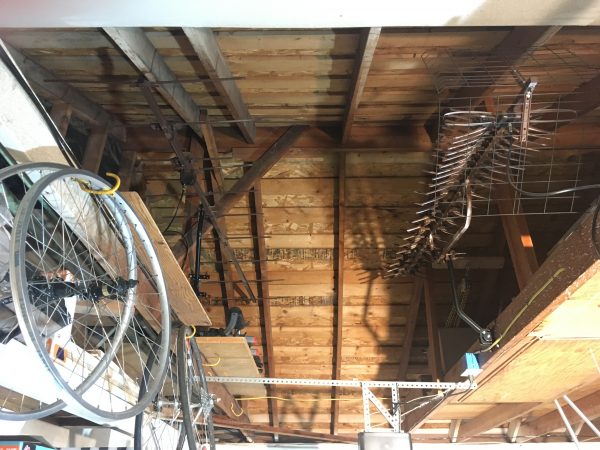 Weeks later, it was time to get reception to TVs upstairs. I found a route to get coax between the first and second floors, but figured it would be best just to have another set of antennas in the upstairs attic. Surprisingly, this guy was already up there (connected to twin lead!) and actually wasn’t too bad, but it couldn’t quite pull in all of the stations. 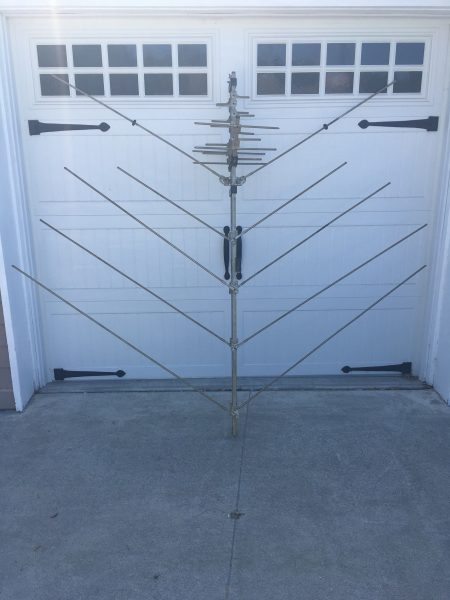 The first task was to go after the UHF signals. I picked up a Solid Signal HDB91X, which appears to be a knockoff of my Antennas Direct 91XG. The build quality isn’t as good as the 91XG, but that wasn’t a big deal for me since it won’t be exposed to weather in the upstairs attic. As expected, due to the height, it did an even better job than the UHF antenna in the garage attic, even (barely) pulling in the lowest station from Mount Wilson shown in gray on the list. The surprising thing is that I had to orient the antenna at almost a 45 degree angle, though maybe that’s not so surprising since that’s what it takes to point above the nearby hills. 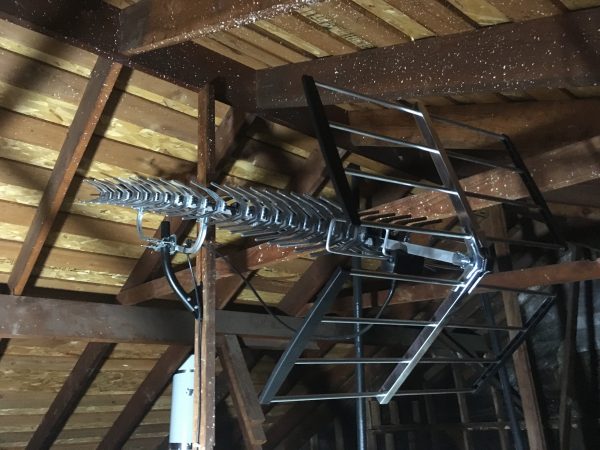 Now it was time to address the VHF situation. There are four stations broadcasting in the high-VHF spectrum in the Los Angeles market: 7, 9, 11, and 13. Surprisingly, reception of these stations would prove to be more challenging, even though they are all at the top of the TV Fool report. I originally thought of keeping the old antenna (connected to coax, not twin lead, of course) for that purpose, as it pulled in 9 and 11 well, but reception of 7 was marginal and 13 was non-existent. Meanwhile, with the migration of TV channels from VHF to the UHF spectrum, many dedicated high-VHF yagi antennas such as my Winegard are no longer in production. Therefore, I went to my local orange big box home improvement store, and they had the RCA ANT752Z in stock. Playing around with the antenna upstairs right after putting it together, I could see that 9 and 11 had no problem coming in at all, but when I tried to get 7 I would lose 13, and vice versa. Since this antenna is much smaller than the old antenna, I had more freedom to roam around the upstairs attic until I found a sweet spot where I could get both 7 and 13 (in addition to 9 and 11). (Edit: Apparently KDOC on virtual channel 56 broadcasts on real channel 12 in the high VHF spectrum, and it comes in fine also.) 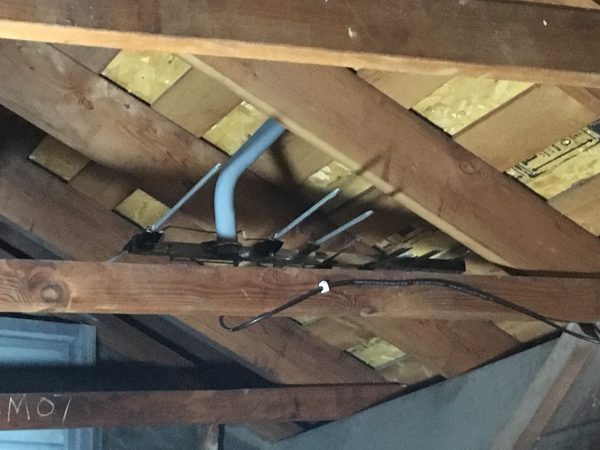 Success! And I recommend the RCA antenna, although I paid $50 at the store since I needed it right away, a similar model can be found for $40 online. Either way, it’s a good price, especially since the J-mount is included, that alone would be $15 if you had to buy it separately!

Update: Well, I must have been lucky on the day that I installed the RCA antenna, because after that, channel 13 wouldn’t come in, and channel 7 was marginal. So the RCA antenna went back to the store, and I found a dedicated high-VHF yagi antenna from Stellar Labs. It’s a good thing I have a roomy upstairs attic, because with that tall vertical beam and the overall length of 83″, it takes up a lot of room, but it worked well once I got it up there. 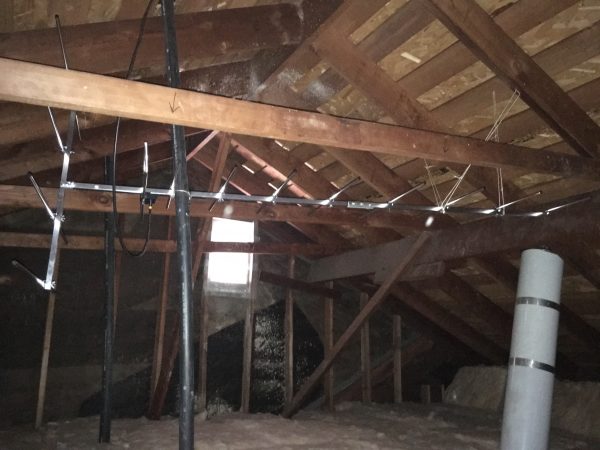 I connected the two upstairs attic antennas with another VHF/UHF diplexer, and now this combination is even better than the two antennas in the garage attic! Actually, now that I have coax running throughout the house, the garage attic antennas are now superfluous, but they’re already installed, so I’ll leave well enough alone.